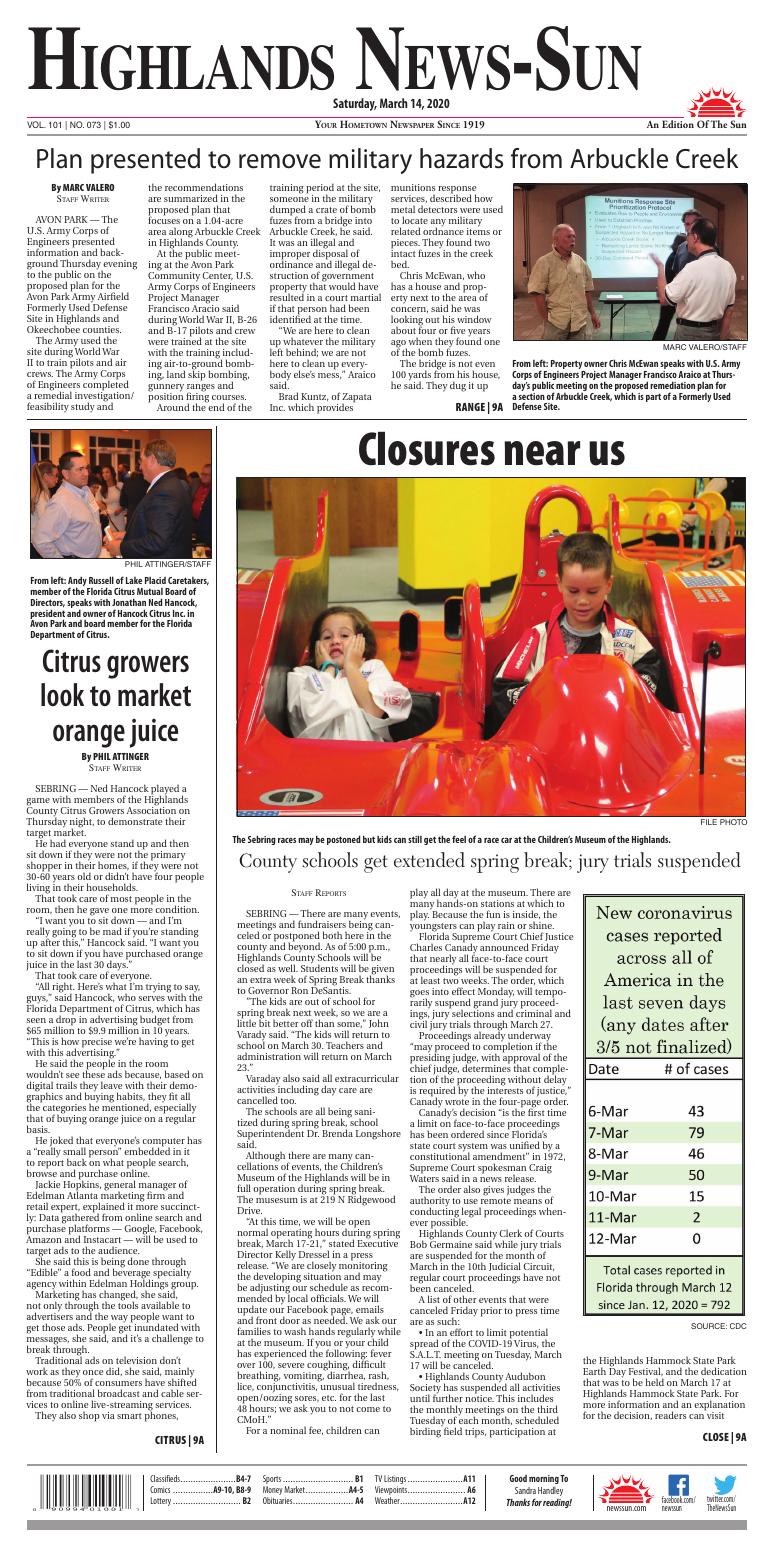 From left: Property owner Chris McEwan speaks with U.S. Army Corps of Engineers Project Manager Francisco Araico at Thursday’s public meeting on the proposed remediation plan for a section of Arbuckle Creek, which is part of a Formerly Used Defense Site.

AVON PARK — The U.S. Army Corps of Engineers presented information and background Thursday evening to the public on the proposed plan for the Avon Park Army Airfield Formerly Used Defense Site in Highlands and Okeechobee counties.

The Army used the site during World War II to train pilots and air crews. The Army Corps of Engineers completed a remedial investigation/feasibility study and the recommendations are summarized in the proposed plan that focuses on a 1.04-acre area along Arbuckle Creek in Highlands County.

At the public meeting at the Avon Park Community Center, U.S. Army Corps of Engineers Project Manager Francisco Aracio said during World War II, B-26 and B-17 pilots and crew were trained at the site with the training including air-to-ground bombing, land skip bombing, gunnery ranges and position firing courses.

Around the end of the training period at the site, someone in the military dumped a crate of bomb fuzes from a bridge into Arbuckle Creek, he said. It was an illegal and improper disposal of ordinance and illegal destruction of government property that would have resulted in a court martial if that person had been identified at the time.

Chris McEwan, who has a house and property next to the area of concern, said he was looking out his window about four or five years ago when they found one of the bomb fuzes.

The bridge is not even 100 yards from his house, he said. They dug it up and showed me what it was and actually blew it up on part of the property.

McEwan said he was surprised that after finding the two fuzes in the water they are coming back with a proposed plan.

“I guess they have more money,” he said. “There was a whole bunch of those fuzes dumped there around 1944, but they only found two.”

It was noted at the meeting that two of the fuzes were found many years ago that resulted in two deaths.

Removal/remediation within Arbuckle Creek is the preferred course of action, according to the proposed plan.

Projects are prioritized based on the risk to people and the environment. The scale is from 1 (highest risk) to 8 (no known or suspected hazard). The Arbuckle Creek ranking is 4 on that scale, it was noted at the public meeting.

Aracio said there is funding for the removal/remediation project at the creek and the work may start next year.

For anyone who is on a Formerly Used Defense Site, Araico stressed the 3Rs: Recognize, Retreat and Report, which means recognize the object you found could be dangerous, leave the area without touching or moving the object and call 911 immediately.

Corona_coverage
Closures near us, county schools are among them
rwashington  / Staff Reports
03.14.20
rwashington / Source: CDC

The Sebring races may be postoned but kids can still get the feel of a race car at the Children’s Museum of the Highlands.

Children’s Muesum of the Highlands Executive Director Kelly Dressel said it is a-okay to bring healthy kids to the museum on spring break.

Playing cashier is great fun at the Children’s Museum of the Highlands.

SEBRING — There are many events, meetings and fundraisers being canceled or postponed both here in the county and beyond. As of 5:00 p.m., Highlands County Schools will be closed as well. Students will be given an extra week of Spring Break thanks to Governor Ron DeSantis.

”The kids are out of school for spring break next week, so we are a little bit better off than some,” John Varady said. “The kids will return to school on March 30. Teachers and administration will return on March 23.”

Varaday also said all extracurricular activities including day care are cancelled too.

The schools are all being sanitized during spring break, school Superintendent Dr. Brenda Longshore said.

Although there are many cancellations of events, the Children’s Museum of the Highlands will be in full operation during spring break. The musesum is at 219 N Ridgewood Drive.

“At this time, we will be open normal operating hours during spring break, March 17-21,” stated Executive Director Kelly Dressel in a press release. “We are closely monitoring the developing situation and may be adjusting our schedule as recommended by local officials. We will update our Facebook page, emails and front door as needed. We ask our families to wash hands regularly while at the museum. If you or your child has experienced the following: fever over 100, severe coughing, difficult breathing, vomiting, diarrhea, rash, lice, conjunctivitis, unusual tiredness, open/oozing sores, etc. for the last 48 hours; we ask you to not come to CMoH.”

For a nominal fee, children can play all day at the museum. There are many hands-on stations at which to play. Because the fun is inside, the youngsters can play rain or shine.

Proceedings already underway “may proceed to completion if the presiding judge, with approval of the chief judge, determines that completion of the proceeding without delay is required by the interests of justice,” Canady wrote in the four-page order.

Canady’s decision “is the first time a limit on face-to-face proceedings has been ordered since Florida’s state court system was unified by a constitutional amendment” in 1972, Supreme Court spokesman Craig Waters said in a news release.

The order also gives judges the authority to use remote means of conducting legal proceedings whenever possible.

Highlands County Clerk of Courts Bob Germaine said while jury trials are suspended for the month of March in the 10th Judicial Circuit, regular court proceedings have not been canceled.

A list of other events that were canceled Friday prior to press time are as such:

• In an effort to limit potential spread of the COVID-19 Virus, the S.A.L.T. meeting on Tuesday, March 17 will be canceled.

• Highlands County Audubon Society has suspended all activities until further notice. This includes the monthly meetings on the third Tuesday of each month, scheduled birding field trips, participation at the Highlands Hammock State Park Earth Day Festival, and the dedication that was to be held on March 17 at Highlands Hammock State Park. For more information and an explanation for the decision, readers can visit highlandsaudubon.org.

• The Heartland Coalition for the Homeless has chosen to cancel the quarterly CoC meeting scheduled for March 19 at St. John United Methodist Church, 33631 Grand Prix Drive in Sebring.

• Avon Park Air Force Range Outdoor Recreation Program will temporarily suspend the sale of one day, weekend, and annual recreation permits. Only current MRA and PRA hunt holders, their companions and current recreation permit holder will be allowed on the property.

• Walt Disney World will be closed March 15 through the end of the month.

• Universal Studios will be closed March 15 to the end of the month but will evaluate then.

• Busch Gardens, SeaWorld Parks and Entertainment under the Blackstone parent company will be closed from March 16 through the end of the month.

• Duke Energy will not disconnect power for non-payment of home and business accounts during the coronavirus crisis.

• Comcast will offer free internet for 60 days to low income families during the coronavirus pandemic. Call 855-846-8376 for information on the program.

From left: Andy Russell of Lake Placid Caretakers, member of the Florida Citrus Mutual Board of Directors, speaks with Jonathan Ned Hancock, president and owner of Hancock Citrus Inc. in Avon Park and board member for the Florida Department of Citrus. They joined a full room of people Thursday night at the annual meeting of the Highlands County Citrus Growers Association.

Despite many local events being canceled or postponed, Thursday night’s annual meeting of the Highlands County Citrus Growers Association drew a good crowd.

Jackie Hopkins, general manager of Edelman Atlanta, tells members of the Highlands County Citrus Growers Association some of the new mobile shopping platform and live-streaming advertising strategies for marketing orange juice, especially to ‘lapsed buyers’ who have bought juice in the past and would buy it again.

Tami Cullens, at right, greets a friend at the start of Thursday night’s annual meeting of the Highlands County Citrus Growers Association.

SEBRING — Ned Hancock played a game with members of the Highlands County Citrus Growers Association on Thursday night, to demonstrate their target market.

That took care of most people in the room, then he gave one more condition.

That took care of everyone.

“All right. Here’s what I’m trying to say, guys,” said Hancock, who serves with the Florida Department of Citrus, which has seen a drop in advertising budget from $65 million to $9.9 million in 10 years. “This is how precise we’re having to get with this advertising.”

He said the people in the room wouldn’t see these ads because, based on digital trails they leave with their demographics and buying habits, they fit all the categories he mentioned, especially that of buying orange juice on a regular basis.

He joked that everyone’s computer has a “really small person” embedded in it to report back on what people search, browse and purchase online.

She said this is being done through “Edible” a food and beverage specialty agency within Edelman Holdings group.

Marketing has changed, she said, not only through the tools available to advertisers and the way people want to get those ads. People get inundated with messages, she said, and it’s a challenge to break through.

Traditional ads on television don’t work as they once did, she said, mainly because 50% of consumers have shifted from traditional broadcast and cable services to online live-streaming services.

They also shop via smart phones, because they want to get information from it and act on that information, even in conjunction with a “brick and mortar” store.

She said 37 million consumers make up a “lapsed buyer” audience — a three-times bigger audience than Florida Citrus has tried to hit — who have not bought orange juice in the last 90 days. Ads targeting them focus on their “purchase triggers” — the reasons they make purchases — and the data and insights about where they live and shop and how that affects their behavior.

The goal is not awareness, but purchases by the target market, Hopkins said. This means a campaign driven by data on how those people behave, and adjusted for their behavior.

A big focus right now, she said, is promoting orange juice and vitamin C as a way to combat cold and flu season as well as all illness.

The national campaign calls orange juice “the original wellness drink,” with a focus on e-commerce ads placed between live-streamed shows, such as on Amazon Fire, and in shopping platforms like Instacart shopping app, used by Publix, and Walmart’s online shopping and pickup service.

When a customer selects “orange juice” in the app, it will suggest a Florida-produced brand.

“The benefits of Instacart is it’s at the moment of purchase,” Hopkins said.

Efficiency also has been good, she said: The goal is $1 in sales for every dollar put in, and this has been $3.60.

Last, but not least, the campaign uses influencers: People on social media who the customer trusts. When they promote it, those in their social media circle will listen.

All of this is designed to make sure the target audience buys orange juice. 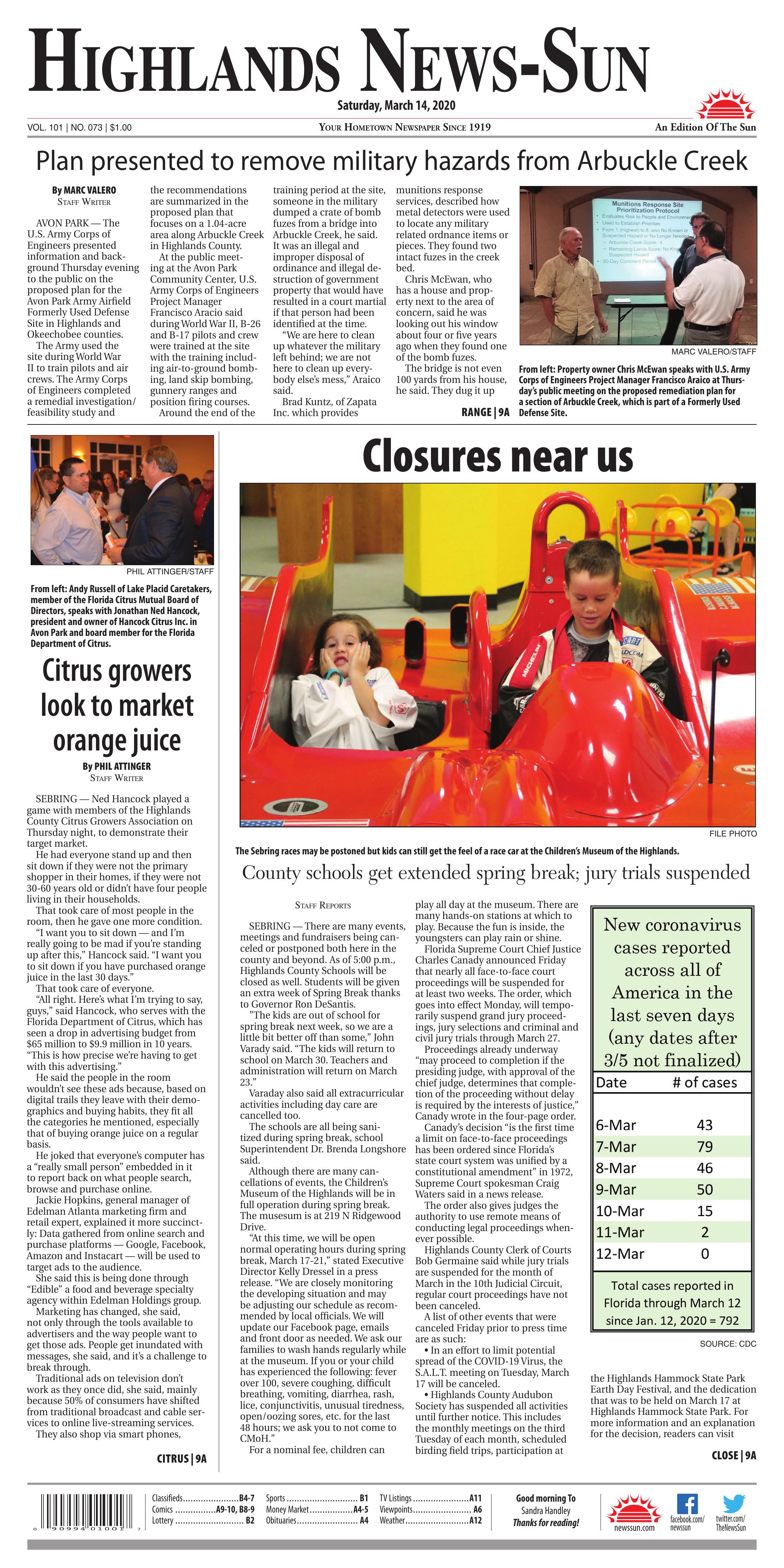