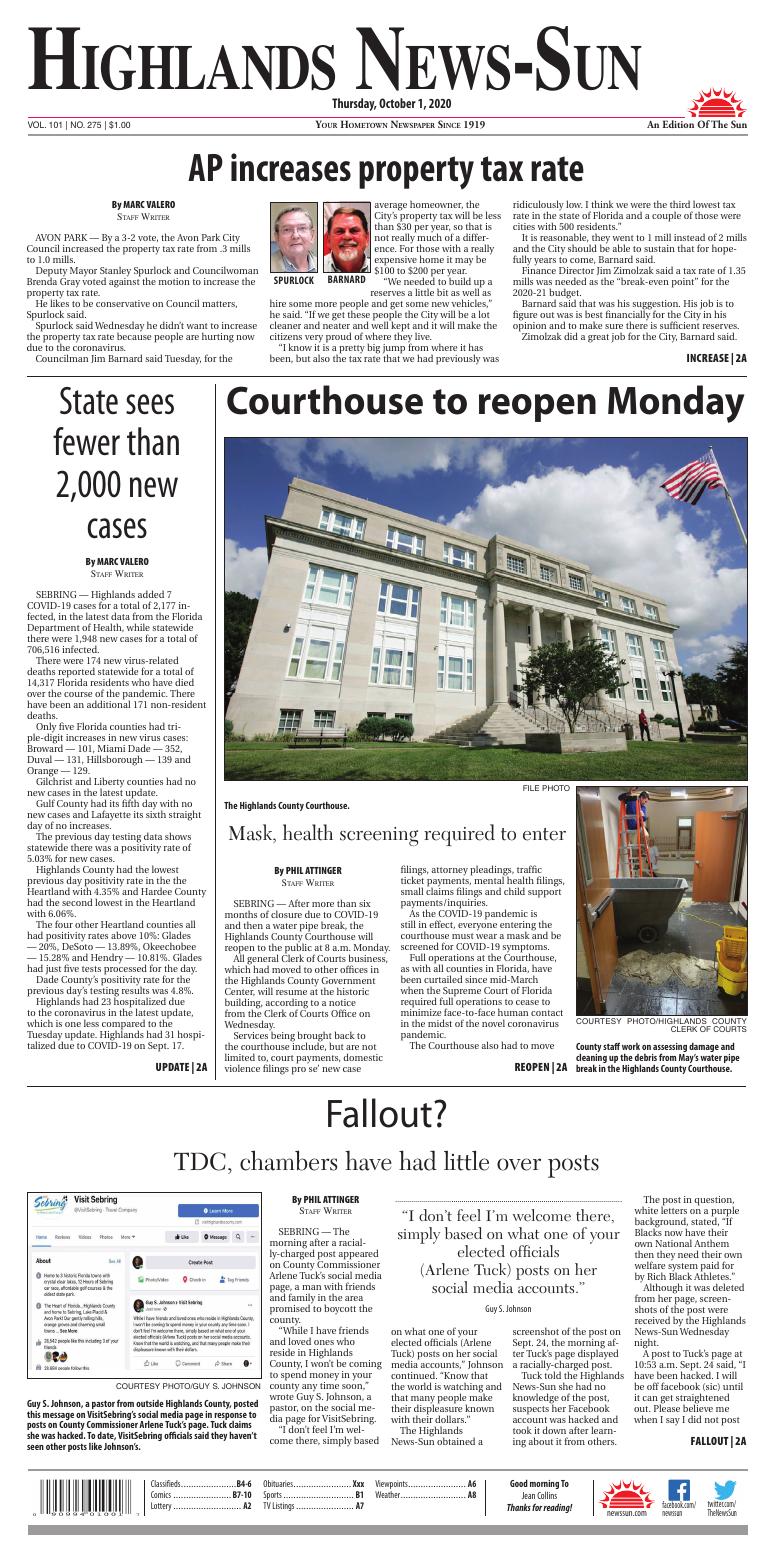 AVON PARK — By a 3-2 vote, the Avon Park City Council increased the property tax rate from .3 mills to 1.0 mills.

He likes to be conservative on Council matters, Spurlock said.

Spurlock said Wednesday he didn’t want to increase the property tax rate because people are hurting now due to the coronavirus.

Councilman Jim Barnard said Tuesday, for the average homeowner, the City’s property tax will be less than $30 per year, so that is not really much of a difference. For those with a really expensive home it may be $100 to $200 per year.

“We needed to build up reserves a little bit as well as hire some more people and get some new vehicles,” he said. “If we get these people the City will be a lot cleaner and neater and well kept and it will make the citizens very proud of where they live.

“I know it is a pretty big jump from where it has been, but also the tax rate that we had previously was ridiculously low. I think we were the third lowest tax rate in the state of Florida and a couple of those were cities with 500 residents.”

It is reasonable that they went to 1 mill instead of 2 mills and the City should be able to sustain that for hopefully years to come, Barnard said.

Finance Director Jim Zimolzak said a tax rate of 1.35 mills was needed as the “break-even point” for the 2020-21 budget.

Barnard said that was his suggestion. His job is to figure out was is best financially for the City and to make sure there is sufficient reserves.

Zimolzak did a great job for the City, Barnard said. But, the City always doesn’t spend all the money that it has and will likely save when some open jobs are not filled right away.

“I think we have more than enough in reserves and we have money carried over from last year, too, he said. “So I think financially we are in great, great shape.

“The tax rate will make sure that we are guaranteed that we are safe and I think that you will see at the end of the year, we won’t spend all the money that is in the budget. So we might be able to make adjustments next year.”

County staff work on assessing damage and cleaning up the debris from May’s water pipe break in the Highlands County Courthouse.

SEBRING — After more than six months of closure due to COVID-19 and then a water pipe break, the Highlands County Courthouse will reopen to the public at 8 a.m. Monday.

All general Clerk of Courts business, which had moved to other offices in the Highlands County Government Center, will resume at the historic building, according to a notice from the Clerk of Courts Office on Wednesday.

As the COVID-19 pandemic is still in effect, everyone entering the courthouse must wear a mask and be screened for COVID-19 symptoms.

Full operations at the Courthouse, as with all counties in Florida, have been curtailed since mid-March when the Supreme Court of Florida required full operations to cease to minimize face-to-face human contact in the midst of the novel coronavirus pandemic.

The Courthouse also had to move all operations out of the courthouse at the start of June when a water pipe broke on May 29 between the second and third floors and flooded offices on two floors in the historic portion of the courthouse with approximately three inches of water in places.

Then Clerk of Courts Bob Germaine said he couldn’t have people work in the water-damaged areas without being certain the air was free of mold.

He expected a full clean-up to last a month. Trials resumed in mid-June, but mostly through teleconferencing.

Germaine also feared his office would run out of operating funds by mid-August. When surplus Coronavirus Aid, Relief, and Economic Security (CARES) Act funds arrived in the county, some of the funds were available to the Clerk’s Office to help pay for administration of the program.

Guy S. Johnson, a pastor from outside Highlands County, posted this message on VisitSebring’s social media page in response to posts on County Commissioner Arlene Tuck’s page. Tuck claims she was hacked. To date, VisitSebring officials said they haven’t seen other posts like Johnson’s.

SEBRING — The morning after a racially-charged post appeared on County Commissioner Arlene Tuck’s social media page, a man with friends and family in the area promised to boycott the county.

“While I have friends and loved ones who reside in Highlands County, I won’t be coming to spend money in your county any time soon,” wrote Guy S. Johnson, a pastor, on the social media page for VisitSebring.

“I don’t feel I’m welcome there, simply based on what one of your elected officials (Arlene Tuck) posts on her social media accounts,” Johnson continued. “Know that the world is watching and that many people make their displeasure known with their dollars.”

The Highlands News-Sun obtained a screenshot of the post on Sept. 24, the morning after Tuck’s page displayed a racially-charged post.

Tuck told the Highlands News-Sun she had no knowledge of the post, suspects her Facebook account was hacked and took it down after learning about it from others.

The post in question, white letters on a purple background, stated, “If Blacks now have their own National Anthem then they need their own welfare system paid for by Rich Black Athletes.”

Although it was deleted from her page, screenshots of the post were received by the Highlands News-Sun Wednesday night.

A post to Tuck’s page at 10:53 a.m. Sept. 24 said, “I have been hacked. I will be off facebook (sic) until it can get straightened out. Please believe me when I say I did not post any offensive statement.”

That post received a barrage of comments from community members coupled with screenshots of apparent other posts from her page expressing similar views to the original offensive post.

By coincidence, Johnson’s post to VisitSebring also is no longer on that page.

Casey Hartt, lead marketer for VisitSebring, the brand for the Highlands County Tourist Development Council, said she and her staff looked for Johnson’s post on the afternoon of Sept. 24 and could not find it.

Highlands News-Sun reached out to Johnson to see if he had taken down the post himself, but got no immediate answer.

Hartt said VisitSebring has had no more comments or posts from people promising to boycott the county.

If someone is upset, she said, she would prefer they find another way to voice their displeasure without affecting local business.

Likewise, both of the Chamber of Commerce offices for Sebring and Lake Placid said they, as private and non-public entities, had not received additional words of displeasure about the posts from potential or past visitors through any communication channels.

The Highlands News-Sun also contacted the Avon Park Chamber of Commerce, but did not receive a reply.

“Nobody’s reached out to us,” said Liz Barber, president and CEO of the Greater Sebring Chamber of Commerce. “Most people realize the chamber is a private entity and not public or affiliated with local government.”

Likewise, officials at the Greater Lake Placid Chamber of Commerce said that while they had seen a slower September than normal, no one had told them that social media posts had anything to do with it.

Lake Placid Chamber officials said the COVID-19 pandemic has had the greatest impact, including cancellation of the annual Caladium Festival, the biggest public event for the town each year.

To a certain degree, officials said, visitation has increased in the area of mural tours, an outside activity.

Lake Placid Chamber officials said incoming guests have shared that they have felt “stir crazy” during the pandemic and decided they could visit the murals in masks and keep social distance without affecting the experience.

Likewise, Hartt said no one involved with last weekend’s GeoTour geocaching event or the pending cycling events this month have expressed any concerns about the posts.

“I don’t feel I’m welcome there, simply based on what one of your elected officials (Arlene Tuck) posts on her social media accounts."

“Our position is, ‘Please don't’ punish the entire community for the actions of one person.’”

There were 174 new virus-related deaths reported statewide for a total of 14,317 Florida residents who have died over the course of the pandemic. There have been an additional 171 non-resident deaths.

Gilchrist and Liberty counties had no new cases in the latest update.

Gulf County had its fifth day with no new cases and Lafayette its sixth straight day of no increases.

The previous day testing data shows statewide there was a positivity rate of 5.03% for new cases.

Nationwide there have been 7,210,067 virus cases with 206,494 deaths. California and Texas are the only two states to have seen more cases than Florida.

Worldwide there have been 33,785,178 cases with 1,010,147 deaths. The United States, India, Brazil and Russia remained the only four countries to have had more than 1 million cases. 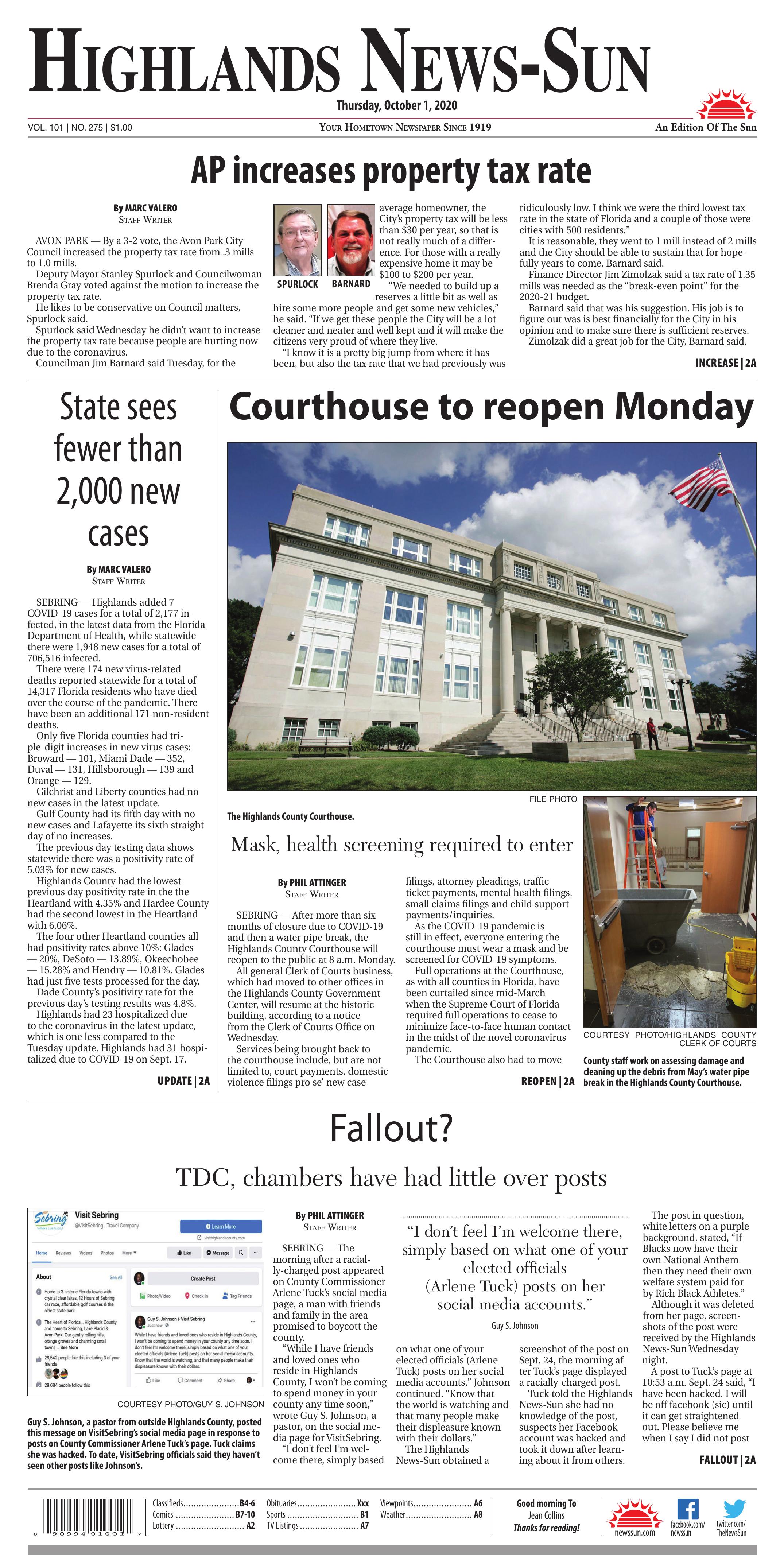