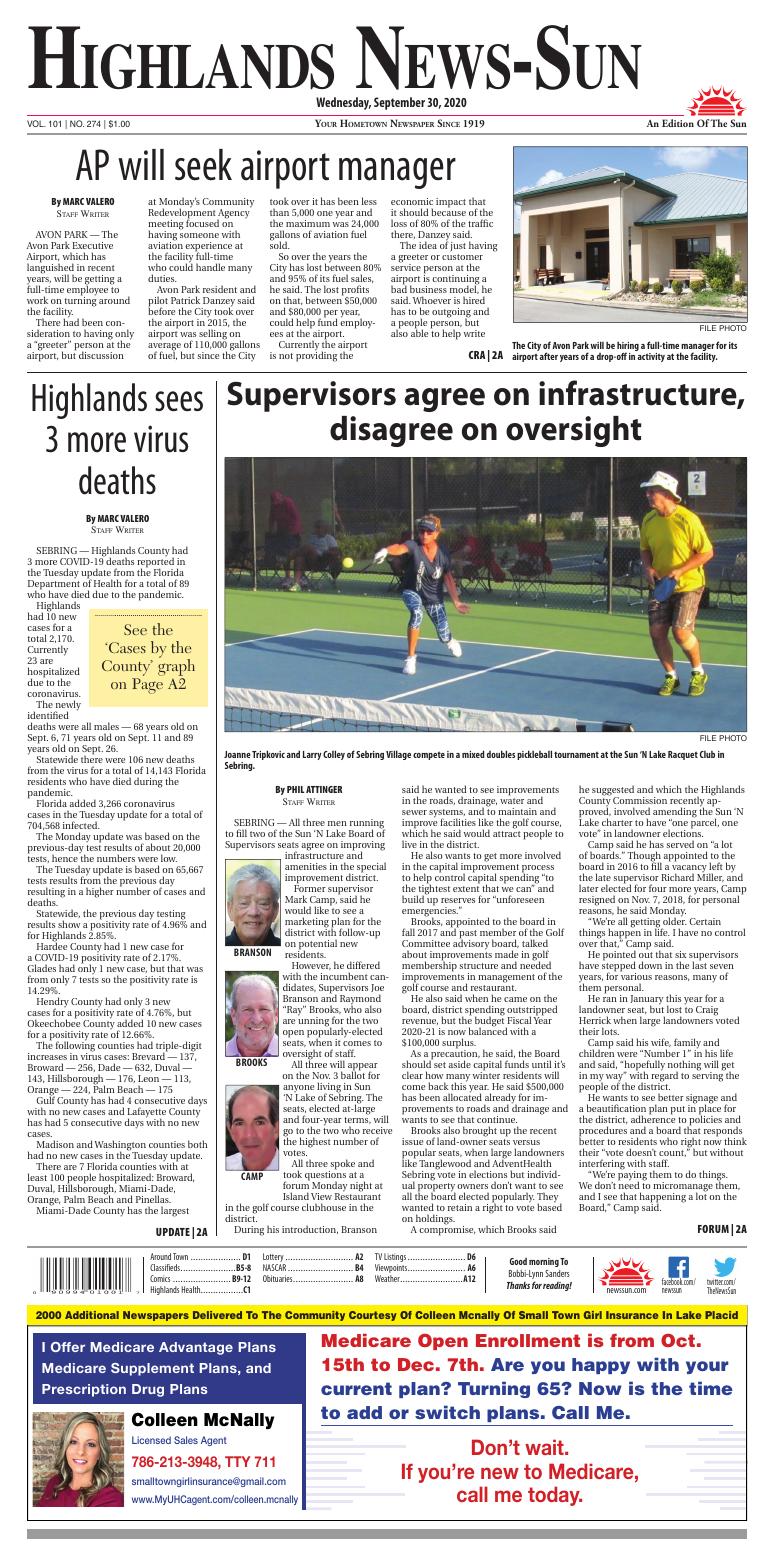 The City of Avon Park will be hiring a full-time manager for its airport after years of a drop-off in activity at the facility.

AVON PARK — The Avon Park Executive Airport, which has languished in recent years, will be getting a full-time employee to work on turning around the facility.

There had been consideration to having only a “greeter” person at the airport, but discussion at Monday’s Community Redevelopment Agency meeting focused on having someone with aviation experience at the facility full-time who could handle many duties.

Currently the airport is not providing the economic impact that it should because of the loss of 80% of the traffic there, Danzey said.

The idea of just having a greeter or customer service person at the airport is continuing a bad business model, he said. Whoever is hired has to be outgoing and a people person, but also able to help write grant applications and work with the Florida Department of Transportation, FAA and work with the City’s airport consultant on projects.

The airport definitely needs a full-time person and maybe someone on the weekend and not a minimum wage employee, Danzey said.

City Councilwoman Maria Sutherland suggested hiring an airport manager at a salary of $60,000 with the cost split between the City’s Community Redevelopment Agency (CRA) and the City’s general fund.

Sutherland also suggested hiring a marketing person at $60,000 who would market the airport and the entire City.

Councilwoman Brenda Gray said this isn’t the right time to hire two people for $120,000 given the current economic situation.

Resident and pilot Bill Jarrett said the airport will not be turned around in short order so the City should consider a budget for four or five years out.

During his 20 years on the Airport CRA Advisory Board they were able to attract government agencies, FDOT and FAA to put a considerable amount of money into the airport, which was done under the thought that the operation would exist.

So there is a fiduciary responsibility that will always exist, he said.

Councilman Jim Barnard said Tuesday the the airport position is in the City’s 2020-21 budget with more than enough money to hire an airport manager and possible somebody with the qualifications of an FBO (fixed based operator).

Also, there is $60,000 in the budget to hire someone to market the airport and the rest of the City, he said.

“I think that we can promote the airport and actually make it profitable as well as make it one of the golden gems the City has available,” Barnard said. He suggested putting in an industrial park there, aviation related or not, which would be a great option to bring other businesses to the City.

SEBRING — All three men running to fill two of the Sun ‘N Lake Board of Supervisors seats agree on improving infrastructure and amenities in the special improvement district.

Former supervisor Mark Camp, said he would like to see a marketing plan for the district with follow-up on potential new residents.

However, he differed with the incumbent candidates, Supervisors Joe Branson and Raymond “Ray” Brooks, who also are unning for the two open popularly-elected seats, when it comes to oversight of staff.

All three will appear on the Nov. 3 ballot for anyone living in Sun ‘N Lake of Sebring. The seats, elected at-large and four-year terms, will go to the two who receive the highest number of votes.

All three spoke and took questions at a forum Monday night at Island View Restaurant in the golf course clubhouse in the district.

During his introduction, Branson said he wanted to see improvements in the roads, drainage, water and sewer systems, and to maintain and improve facilities like the golf course, which he said would attract people to live in the district.

He also wants to get more involved in the capital improvement process to help control capital spending “to the tightest extent that we can” and build up reserves for “unforeseen emergencies.”

Brooks, appointed to the board in fall 2017 and past member of the Golf Committee advisory board, talked about improvements made in golf membership structure and needed improvements in management of the golf course and restaurant.

He also said when he came on the board, district spending outstripped revenue, but the budget Fiscal Year 2020-21 is now balanced with a $100,000 surplus.

As a precaution, he said, the Board should set aside capital funds until it’s clear how many winter residents will come back this year. He said $500,000 has been allocated already for improvements to roads and drainage and wants to see that continue.

Brooks also brought up the recent issue of land-owner seats versus popular seats, when large landowners like Tanglewood and AdventHealth Sebring vote in elections but individual property owners don’t want to see all the board elected popularly. They wanted to retain a right to vote based on holdings.

A compromise, which Brooks said he suggested and which the Highlands County Commission recently approved, involved amending the Sun ‘N Lake charter to have “one parcel, one vote” in landowner elections.

Camp said he has served on “a lot of boards.” Though appointed to the board in 2016 to fill a vacancy left by the late supervisor Richard Miller, and later elected for four more years, Camp resigned on Nov. 7, 2018, for personal reasons, he said Monday.

“We’re all getting older. Certain things happen in life. I have no control over that,” Camp said.

He pointed out that six supervisors have stepped down in the last seven years, for various reasons, many of them personal.

He ran in January this year for a landowner seat, but lost to Craig Herrick when large landowners voted their lots.

Camp said his wife, family and children were “Number 1” in his life and said, “hopefully nothing will get in my way” with regard to serving the people of the district.

He wants to see better signage and a beautification plan put in place for the district, adherence to policies and procedures and a board that responds better to residents who right now think their “vote doesn’t count,” but without interfering with staff.

“We’re paying them to do things. We don’t need to micromanage them, and I see that happening a lot on the Board,” Camp said.

One of the questions posed to the board addressed that concern. When asked in the forum, Branson said the Board needs to redefine its relationship and communications avenues with and from staff.

Brooks blamed the Florida Government in the Sunshine law that prevents communication between board members outside meetings.

The law exists to prevent decisions being made between elected representatives outside of publicly-noticed meetings.

Camp said no board member can direct a staff member to do anything, and didn’t want to see staff have to ask permission for minuscule cost items.

When asked what they would do if the district were to have a $1 million grant, Branson said he would contract a grant writing service to leverage the money into more funding, and would prioritize the needed improvements to the district that he mentioned.

Brooks said he would prioritize the $1 million toward various improvements to infrastructure and recreation, including for families.

“I think we’re actually doing it right now,” Brooks said, in regard to some pending projects.

New residents bring in revenue through assessments, fees for water and sewer and perhaps even golf.

A question to them had to do with whether or not the district gets revenue sharing from the 10-cent local-option gas tax. Brooks said the district doesn’t get that money from the Florida Department of Revenue because it is a special district, not an incorporated municipality.

The supervisors have asked their board attorney to look into it, and Brooks favors asking the Board of County Commission to consider supporting revenue sharing with the district.

Camp said he would want to hear from the attorney what avenues exist to pursue that request. He would suggest looking into it.

Branson said it’s a state policy, but also said the county might owe the district three years of free asphalt, based on a previous negotiation, and would look into that.

When asked about the single-most important issue for the survival of the district, Camp said the district needs more residents because the only revenue comes from assessments, and he doesn’t think the district has the ability to float loans right now.

Another questions had to do with removal of off-site signs from private property and issues with district-owned land not being maintained and the policies involving golf cart rentals at the Sun ‘N Lake Golf Course.

SEBRING — Highlands County had 3 more COVID-19 deaths reported in the Tuesday update from the Florida Department of Health for a total of 89 who have died due to the pandemic.

Highlands had 10 new cases for a total 2,170. Currently 23 are hospitalized due to the coronavirus.

Statewide there were 106 new deaths from the virus for a total of 14,143 Florida residents who have died during the pandemic.

Florida added 3,266 coronavirus cases in the Tuesday update for a total of 704,568 infected.

The Monday update was based on the previous-day test results of about 20,000 tests, hence the numbers were low.

The Tuesday update is based on 65,667 tests results from the previous day resulting in a higher number of cases and deaths.

Statewide, the previous day testing results show a positivity rate of 4.96% and for Highlands 2.85%.

Madison and Washington counties both had no new cases in the Tuesday update.

Miami-Dade County has the largest number in the state hospitalized due to the virus with 363. 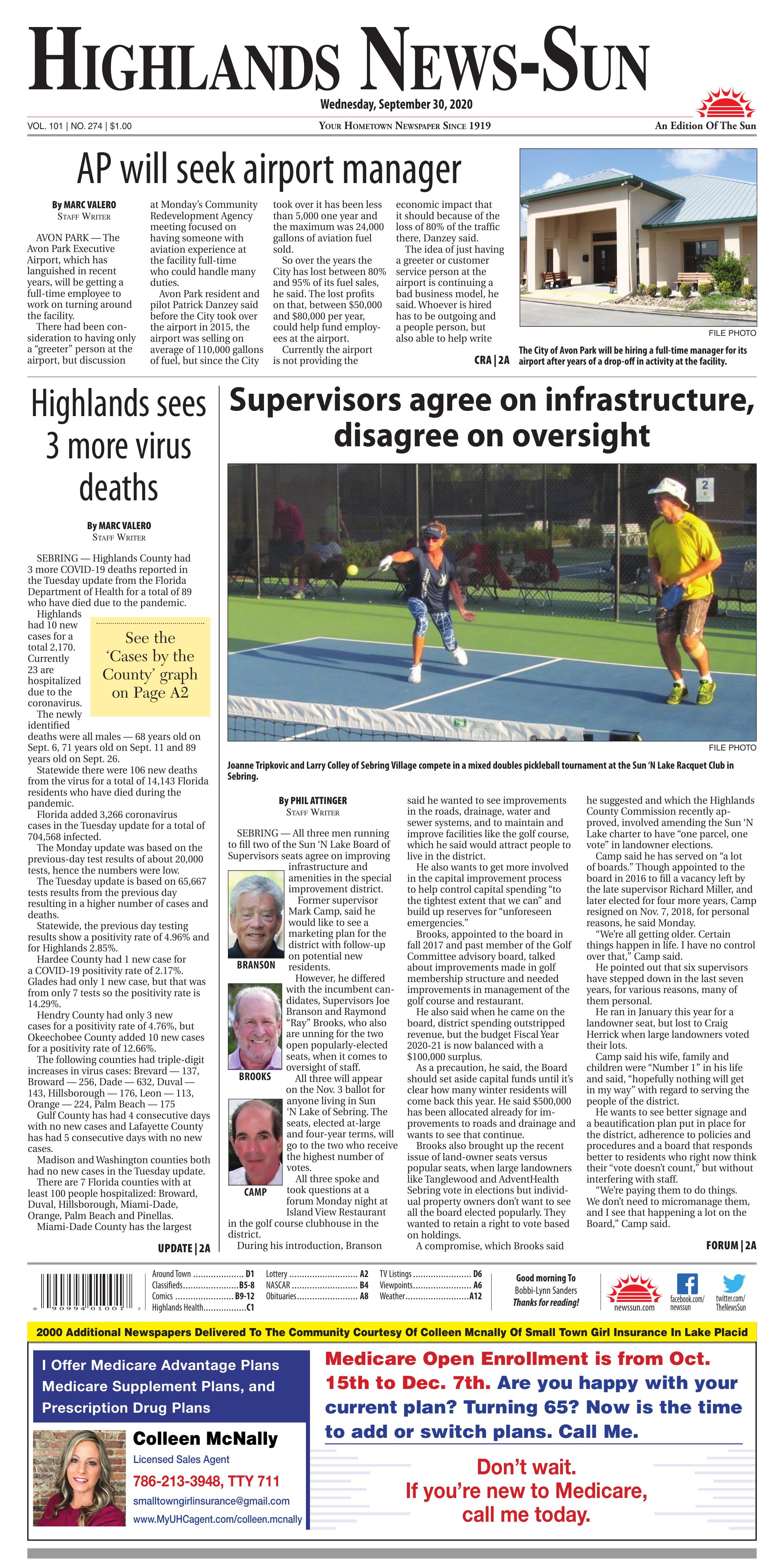