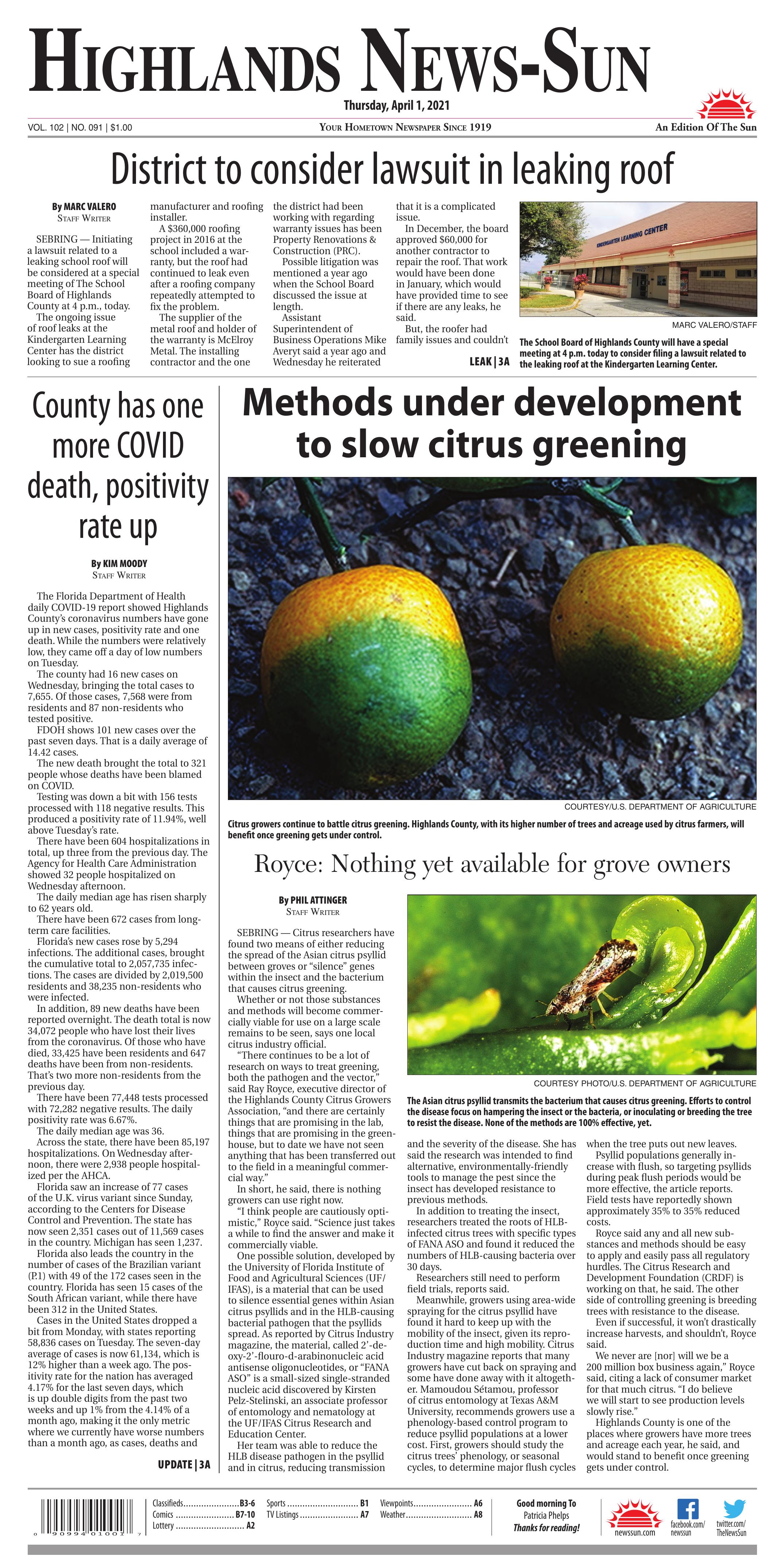 The School Board of Highlands County will have a special meeting at 4 p.m. today to consider filing a lawsuit related to the leaking roof at the Kindergarten Learning Center.

SEBRING — Initiating a lawsuit related to a leaking school roof will be considered at a special meeting of The School Board of Highlands County at 4 p.m., today.

The ongoing issue of roof leaks at the Kindergarten Learning Center has the district looking to sue a roofing manufacturer and roofing installer.

A $360,000 roofing project in 2016 at the school included a warranty, but the roof had continued to leak even after a roofing company repeatedly attempted to fix the problem.

The supplier of the metal roof and holder of the warranty is McElroy Metal. The installing contractor and the one the district had been working with regarding warranty issues has been Property Renovations & Construction (PRC).

Possible litigation was mentioned a year ago when the School Board discussed the issue at length.

Assistant Superintendent of Business Operations Mike Averyt said a year ago  and Wednesday he reiterated that it is a complicated issue.

In December, the board approved $60,000 for another contractor to repair the roof. That work would have been done in January, which would have provided time to see if there are any leaks, he said.

But, the roofer had family issues and couldn't do the work in January, Averyt said. He will be starting the work in April, but that doesn't leave much time to see if there are any leaks when it rains before the warranty expires.

School Board Attorney John McClure wants the School Board to know, at the special meeting, that it has little time to decide to file a lawsuit in the matter, Averyt said.

In the event of a lawsuit, the district would go after the manufacturer and installer, he said.

"It's a joint case because they are going to be pointing fingers at each other," Averyt said. "It is not going to be an easy case if they [School Board] want to do it."

Averyt said he checked with the Kindergarten Learning Center's principal, Karen Doty, who said there hasn't been any roof leaks since December. But, he noted we are not in the rainy season.

The Asian citrus psyllid transmits the bacterium that causes citrus greening. Efforts to control the disease focus on hampering the insect or the bacteria, or inoculating or breeding the tree to resist the disease. None of the methods are 100% effective, yet.

Citrus growers continue to battle citrus greening. Highlands County, with its higher number of trees and acreage used by citrus farmers, will benefit once greening gets under control.

SEBRING — Citrus researchers have found two means of either reducing the spread of the Asian citrus psyllid between groves or "silence" genes within the insect and the bacterium that causes citrus greening.

Whether or not those substances and methods will become commercially viable for use on a large scale remains to be seen, says one local citrus industry official.

"There continues to be a lot of research on ways to treat greening, both the pathogen and the vector," said Ray Royce, executive director of the Highlands County Citrus Growers Association, "and there are certainly things that are promising in the lab, things that are promising in the greenhouse, but to date we have not seen anything that has been transferred out to the field in a meaningful commercial way."

In short, he said, there is nothing growers can use right now.

"I think people are cautiously optimistic," Royce said. "Science just takes a while to find the answer and make it commercially viable.

One possible solution, developed by the University of Florida Institute of Food and Agricultural Sciences (UF/IFAS), is a material that can be used to silence essential genes within Asian citrus psyllids and in the HLB-causing bacterial pathogen that the psyllids spread. As reported by Citrus Industry magazine, the material, called 2’-deoxy-2’-flouro-d-arabinonucleic acid antisense oligonucleotides, or "FANA ASO" is a small-sized single-stranded nucleic acid discovered by Kirsten Pelz-Stelinski, an associate professor of entomology and nematology at the UF/IFAS Citrus Research and Education Center.

Her team was able to reduce the HLB disease pathogen in the psyllid and in citrus, reducing transmission and the severity of the disease. She has said the research was intended to find alternative, environmentally-friendly tools to manage the pest since the insect has developed resistance to previous methods.

In addition to treating the insect, researchers treated the roots of HLB-infected citrus trees with specific types of FANA ASO and found it reduced the numbers of HLB-causing bacteria over 30 days.

Meanwhile, growers using area-wide spraying for the citrus psyllid have found it hard to keep up with the mobility of the insect, given its reproduction time and high mobility. Citrus Industry magazine reports that many growers have cut back on spraying and some have done away with it altogether. Mamoudou Sétamou, professor of citrus entomology at Texas A&M University, recommends growers use a phenology-based control program to reduce psyllid populations at a lower cost. First, growers should study the citrus trees' phenology, or seasonal cycles, to determine major flush cycles when the tree puts out new leaves.

Royce said any and all new substances and methods should be easy to apply and easily pass all regulatory hurdles. The Citrus Research and Development Foundation (CRDF) is working on that, he said. The other side of controlling greening is breeding trees with resistance to the disease.

Even if successful, it won't drastically increase harvests, and shouldn't, Royce said.

We never are [nor] will we be a 200 million box business again," Royce said, citing a lack of consumer market for that much citrus. "I do believe we will start to see production levels slowly rise."

Highlands County is one of the places where growers have more trees and acreage each year, he said, and would stand to benefit once greening gets under control.

Corona_coverage
County has one more COVID death, positivity rate up

The Florida Department of Health daily COVID-19 report showed Highlands County’s coronavirus numbers have gone up in new cases, positivity rate and one death. While the numbers were relatively low, they came off a day of low numbers on Tuesday.

The county had 16 new cases on Wednesday, bringing the total cases to 7,655. Of those cases, 7,568 were from residents and 87 non-residents who tested positive.

FDOH shows 101 new cases over the past seven days. That is a daily average of 14.42 cases.

The new death brought the total to 321 people whose deaths have been blamed on COVID.

Testing was down a bit with 156 tests processed with 118 negative results. This produced a positivity rate of 11.94%, well above Tuesday’s rate.

There have been 604 hospitalizations in total, up three from the previous day. The Agency for Health Care Administration showed 32 people hospitalized on Wednesday afternoon.

The daily median age has risen sharply to 62 years old.

There have been 672 cases from long-term care facilities.

The daily median age was 36.

Across the state, there have been 85,197 hospitalizations. On Wednesday afternoon, there were 2,938 people hospitalized per the AHCA.

Florida saw an increase of 77 cases of the U.K. virus variant since Sunday, according to the Centers for Disease Control and Prevention. The state has now seen 2,351 cases out of 11,569 cases in the country. Michigan has seen 1,237.

Florida also leads the country in the number of cases of the Brazilian variant (P.1) with 49 of the 172 cases seen in the country. Florida has seen 15 cases of the South African variant, while there have been 312 in the United States.

Cases in the United States dropped a bit from Monday, with states reporting 58,836 cases on Tuesday. The seven-day average of cases is now 61,134, which is 12% higher than a week ago. The positivity rate for the nation has averaged 4.17% for the last seven days, which is up double digits from the past two weeks and up 1% from the 4.14% of a month ago, making it the only metric where we currently have worse numbers than a month ago, as cases, deaths and hospitalizations have all dropped.

Michigan continues to struggle with the virus, with the state reporting 6,311 new cases Wednesday. The state averaged 1,326 new cases just a month ago, but has seen its numbers constantly rise. Michigan’s seven-day average for positivity rate is 13.83%.

According to the Johns Hopkins University Center for Systems Science and Engineering, the United States has seen 30.44 million cases and had 551,747 deaths.

Globally, there have been 128.6 million cases and 2.81 million deaths.