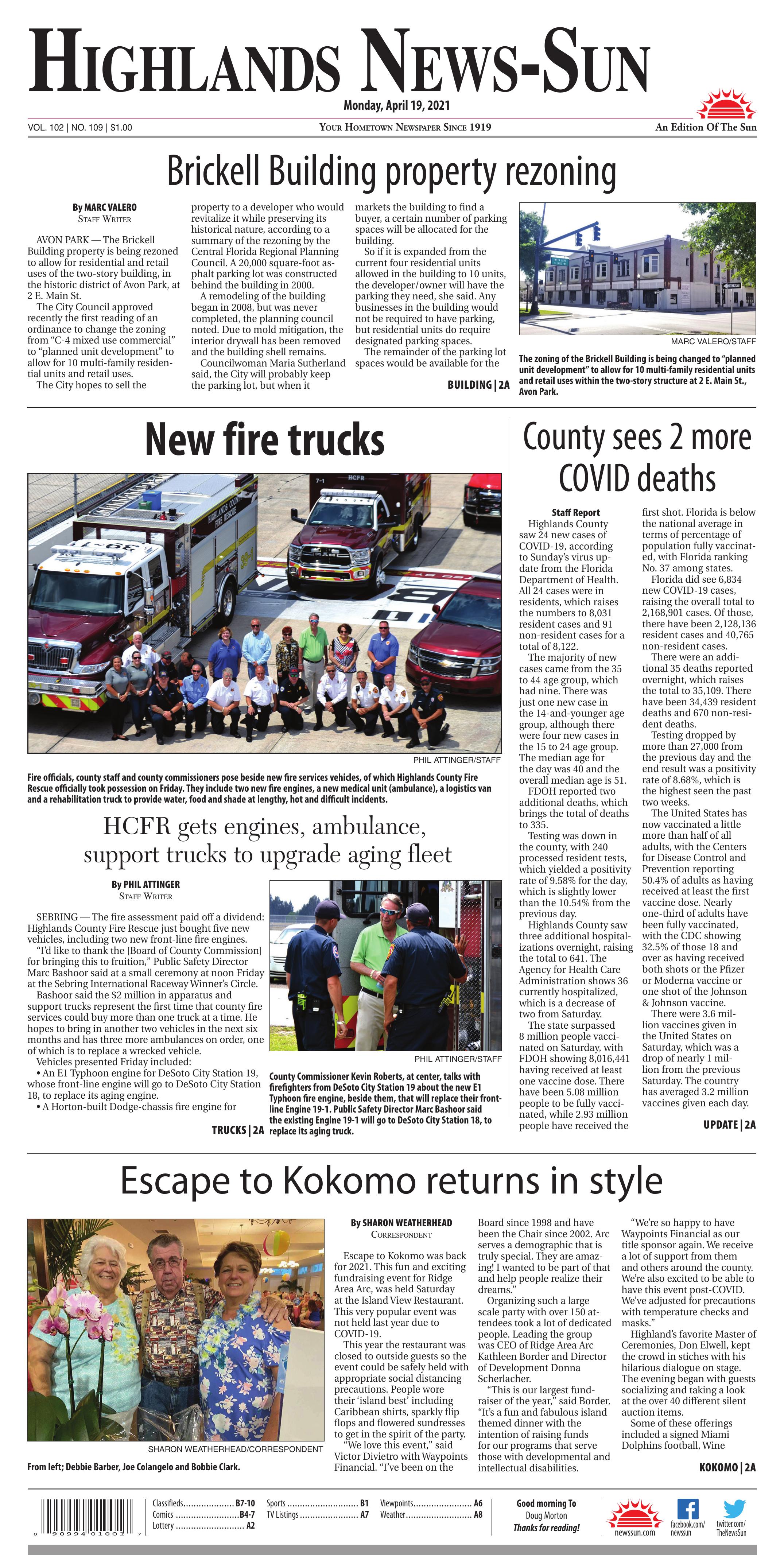 The zoning of the Brickell Building is being changed to “planned unit development” to allow for 10 multi-family residential units and retail uses within the two-story structure at 2 E. Main St., Avon Park.

AVON PARK — The Brickell Building property is being rezoned to allow for residential and retail uses of the two-story building, in the historic district of Avon Park, at 2 E. Main St.

The City Council approved recently the first reading of an ordinance to change the zoning from “C-4 mixed use commercial” to “planned unit development” to allow for 10 multi-family residential units and retail uses.

The City hopes to sell the property to a developer who would revitalize it while preserving its historical nature, according to a summary of the rezoning by the Central Florida Regional Planning Council. A 20,000 square-foot asphalt parking lot was constructed behind the building in 2000.

A remodeling of the building began in 2008, but was never completed, the planning council noted. Due to mold mitigation, the interior drywall has been removed and the building shell remains.

Councilwoman Maria Sutherland said, the City will probably keep the parking lot, but when it markets the building to find a buyer, a certain number of parking spaces will be allocated for the building.

The remainder of the parking lot spaces would be available for the businesses in the area, Sutherland said.

Ownership of the building went back to the City of Avon Park in February.

Highlands County Fire Rescue officials walk out among new vehicles they officially received on Friday at Sebring International Raceway. The trucks include, left to right, a new E1 Typhoon fire engine for DeSoto City Station 19; a Horton Dodge-chassis fire engine for Placid Lakes Station 39; a new ambulance for Sun ‘N Lake Station 7; a command vehicle (in use for a year); Rehab 51 to provide food, water and shade at incidents, and a logistics van.

Placid Lakes Volunteer Fire Chief Mark Fortier, at left, demonstrates the motorized ladder rack on the new Engine 39-1 to replace an aged fire engine at his station. Public Safety Director Marc Bashoor, at right, said Friday that this is the first time, perhaps ever, that the county has been able to purchase multiple new trucks at one time for its fire crews.

Lt. Larry Money of DeSoto City Station 19 gets a bottle of water out of the cooler on Rehabilitation Unit 51, a new truck designed to provide relief to fire and emergency medical crews working long, difficult incidents.

“I’d like to thank the [Board of County Commission] for bringing this to fruition,” Public Safety Director Marc Bashoor said at a small ceremony at noon Friday at the Sebring International Raceway Winner’s Circle.

Bashoor said the $2 million in apparatus and support trucks represent the first time that county fire services could buy more than one truck at a time. He hopes to bring in another two vehicles in the next six months and has three more ambulances on order, one of which is to replace a wrecked vehicle.

• A new logistics van to move supplies easily from the warehouse at headquarters to stations and between stations, as needed.

Also in the presentation Friday was a battalion chief command vehicle that has been in use for almost a year, but not officially noted. HCFR Battalion Chief Billy Kingston told the Highlands News-Sun that the equipment mounted in the rear of the SUV, designed to provide a war-room diagram of the resources allotted to a given incident are indispensable at helping organize even the smallest fire or medical response.

County Commission Chair Scott Kirouac, who presided over the event alongside his fellow commissioners, noted that the county contracted a study 20 years ago for local fire services needs in buildings, vehicles and personnel. The “Fitch Study,” as it came to be known, outlined extensive needs to replace aging and deteriorating buildings and vehicles, as well as adding full-time staff.

The snag, however, was that the county had no way to pay for any of it. That changed two years ago, the county commission voted to consolidate fire and emergency medical services as a combined paid and volunteer department, adding paid full-time positions and upgrading several stations to accommodate 24-hour shifts.

Kirouac said the apparatus fire services presented Friday accounted for “half of the equation.”

“The other half is the people required to operate this equipment,” Kirouac said.

Some of those people were on hand, to talk with commissioners and civilians about the equipment on the vehicles, as well as position them for photos on Pit Straight, the starting point of the Raceway.

Bashoor said they had from noon to 1 p.m. to get photos during a lunch break for Hooked on Driving, one of several events the Raceway hosts, according to Kingston, who also works as SIR safety director.

In his five years serving as safety director at the Raceway, and many other years working the event as a firefighter, Kingston has said the types of calls the 100 or so staff members get “run the gamut” from a trip and fall to internal medical issues, like heart problems.

Potentially fatal incidents are not uncommon, including alcohol poisoning and head trauma, which have largely been reduced by new track safety rules, including the allowable loads of event visitors in open top vehicles.

The Fitch Study called for putting in new stations to assist in covering all the county, one of which will eventually go in at property the county just purchased southwest of SIR. Staff at the gate said they look forward to having it so nearby. Aeromed helicopter usually sits on standby at the adjacent Sebring Regional Airport. HCFR officials have suggested having a helipad at the new fire station to provide an higher level of safety at SIR events, local residents and U.S. 98 motorists.

Escape to Kokomo was back for 2021. This fun and exciting fundraising event for Ridge Area Arc, was held Saturday at the Island View Restaurant. This very popular event was not held last year due to COVID-19.

This year the restaurant was closed to outside guests so the event could be safely held with appropriate social distancing precautions. People wore their ‘island best’ including Caribbean shirts, sparkly flip flops and flowered sundresses to get in the spirit of the party.

“We love this event,” said Victor Divietro with Waypoints Financial. “I’ve been on the Board since 1998 and have been the Chair since 2002. Arc serves a demographic that is truly special. They are amazing! I wanted to be part of that and help people realize their dreams.”

Organizing such a large scale party with over 150 attendees took a lot of dedicated people. Leading the group was CEO of Ridge Area Arc Kathleen Border and Director of Development Donna Scherlacher.

“This is our largest fundraiser of the year,” said Border. “It’s a fun and fabulous island themed dinner with the intention of raising funds for our programs that serve those with developmental and intellectual disabilities.

“We’re so happy to have Waypoints Financial as our title sponsor again. We receive a lot of support from them and others around the county. We’re also excited to be able to have this event post-COVID. We’ve adjusted for precautions with temperature checks and masks.”

Highland’s favorite Master of Ceremonies, Don Elwell, kept the crowd in stiches with his hilarious dialogue on stage. The evening began with guests socializing and taking a look at the over 40 different silent auction items.

Dinner was truly a ‘Cheeseburger in Paradise.’ Wonderful tropical settings and huge cheeseburgers, complete with all the fixings at your table, and served with chips and macaroni salad. Dessert was key lime pie.

While many donations were from local businesses and private donors, some also came from local non-profit organizations.

“All of us non-profits are working hard to support each other during these difficult times,” said Border. “The Children’s Museum, Heartland Horses, and others are trying to help each other gear back up.”

The 60 West Band, from Plant City, kept the place jumping all night with their Jimmy Buffet style music. Songs like “Margaretville,” “Oh, What a Night,” “Free Falling” and “Cheeseburger in Paradise” invited people to the dance floor.

Bill Lee was looking at the silent auction items. Was he looking for something in particular? “No, I’m just looking to see how many my wife signed up for,” he said with a laugh.

Debbie Barber, Joe Colangelo and Bobbie Clark were having a great time. “This is so much fun,” said Clark. “It’s what it’s all about!”

After dinner was the big Hula Hoop contest; one for men and one for women. The ladies took the floor and the crowd decided they were pretty evenly matched. Each one won a hat. The men appeared to need a little more practice except for one who never wavered with his hoop. The contest brought a lot of smiles and laughter from the attendees.

As the evening winded down, the last activity was the live auction. Three vacation packages were up for bid: Music Lover’s Dream (choice of New Orleans, Nashville or Memphis), the Big Apple Experience (New York) or the Dream Car Experience (Las Vegas).

Those wanting to extend their evening of fun could listen or dance to the music of 60 West. It was a great evening of fun that has been a long time in coming.

Highlands County saw 24 new cases of COVID-19, according to Sunday’s virus update from the Florida Department of Health. All 24 cases were in residents, which raises the numbers to 8,031 resident cases and 91 non-resident cases for a total of 8,122.

The majority of new cases came from the 35 to 44 age group, which had nine. There was just one new case in the 14-and-younger age group, although there were four new cases in the 15 to 24 age group. The median age for the day was 40 and the overall median age is 51.

FDOH reported two additional deaths, which brings the total of deaths to 335.

Testing was down in the county, with 240 processed resident tests, which yielded a positivity rate of 9.58% for the day, which is slightly lower than the 10.54% from the previous day.

Highlands County saw three additional hospitalizations overnight, raising the total to 641. The Agency for Health Care Administration shows 36 currently hospitalized, which is a decrease of two from Saturday.

There were an additional 35 deaths reported overnight, which raises the total to 35,109. There have been 34,439 resident deaths and 670 non-resident deaths.

Testing dropped by more than 27,000 from the previous day and the end result was a positivity rate of 8.68%, which is the highest seen the past two weeks.

The United States has now vaccinated a little more than half of all adults, with the Centers for Disease Control and Prevention reporting 50.4% of adults as having received at least the first vaccine dose. Nearly one-third of adults have been fully vaccinated, with the CDC showing 32.5% of those 18 and over as having received both shots or the Pfizer or Moderna vaccine or one shot of the Johnson & Johnson vaccine.

States reported 62,033 new cases and 732 deaths on Saturday, which are consistent with the seven-day averages. The average positivity rate over the past seven days is 4.47%, which is up 23% from a month ago, but also down 11% from the 5.05% seen two months ago.

The Johns Hopkins University Center for Systems Science and Engineering is showing the United States with 31.65 million cases and 567,092 deaths.