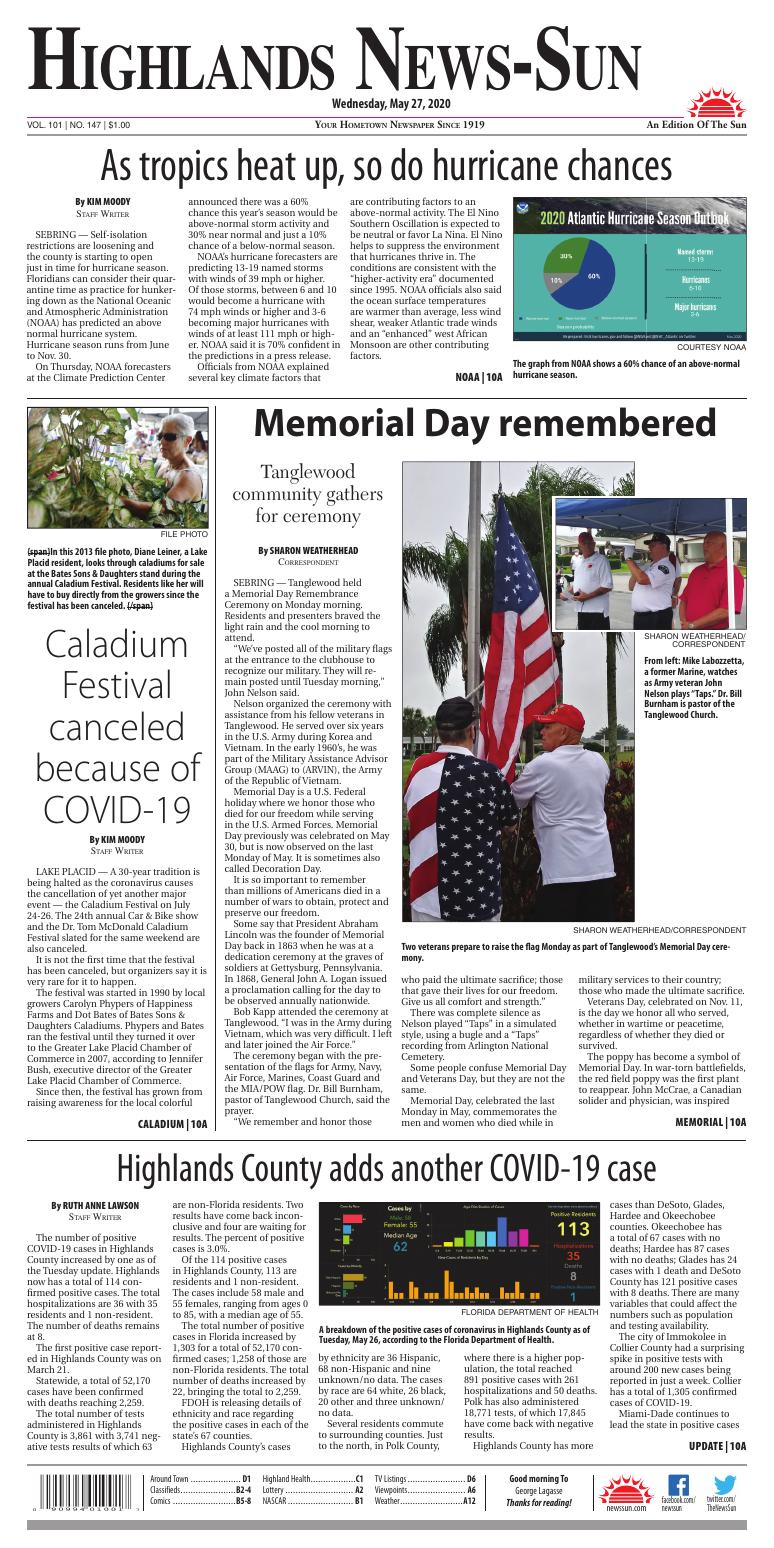 The graph from NOAA shows a 60% chance of an above-normal hurricane season.

SEBRING — Self-isolation restrictions are loosening and the county is starting to open just in time for hurricane season. Floridians can consider their quarantine time as practice for hunkering down as the National Oceanic and Atmospheric Administration (NOAA) has predicted an above normal hurricane system. Hurricane season runs from June to Nov. 30.

On Thursday, NOAA forecasters at the Climate Prediction Center announced there was a 60% chance this year’s season would be above-normal storm activity and 30% near normal and just a 10% chance of a below-normal season.

Officials from NOAA explained several key climate factors that are contributing factors to an above-normal activity. The El Nino Southern Oscillation is expected to be neutral or favor La Nina. El Nino helps to suppress the environment that hurricanes thrive in. The conditions are consistent with the “higher-activity era” documented since 1995. NOAA officials also said the ocean surface temperatures are warmer than average, less wind shear, weaker Atlantic trade winds and an “enhanced” west African Monsoon are other contributing factors.

According to NOAA, an average season would consist of 12 named storms, six hurricanes and three major hurricanes. The year 2020 has already taught us to be prepared for anything, including viruses and murder hornets. The hurricane season has not even started and the first named storm, Arthur, brushed the Outer Banks of North Carolina last week.

NOAA Meteorologist Eric Oglesby urged families to develop a hurricane preparedness plan and to use the time before a storm begins to spin out in the Atlantic Ocean. A hurricane kit should include medications and refills, copies of insurance papers, important phone numbers, cash, food and water. Items can be stashed in a “go” bag or a multi-gallon bucket.

Preparing for hurricanes ahead of storms is a little less expensive this weekend as the 2020 Disaster Preparedness Sales Holiday Tax is Friday through Thursday, June 4. As in the past, there are restrictions and qualifying items. The Florida Department of Revenue has a thorough list with all the restrictions listed at floridarevenue.com. However, a brief overview is:

• reusable ice packs that sell for under $10,

• portable and self-powered sources of light such as battery, hand crank of gas flashlights selling for $20 or less,

• fuel containers and kerosene under $25,

• batteries selling for $30 and less except for marine and automotive; coolers and ice chest,

• in the $50 or less category are bungee cords radios, two-way, tarps and tie downs, and

• portable generators that sell for $750 or less.

“We’ve posted all of the military flags at the entrance to the clubhouse to recognize our military. They will remain posted until Tuesday morning,” John Nelson said.

Nelson organized the ceremony with assistance from his fellow veterans in Tanglewood. He served over six years in the U.S. Army during Korea and Vietnam. In the early 1960’s, he was part of the Military Assistance Advisor Group (MAAG) to (ARVIN), the Army of the Republic of Vietnam.

Memorial Day is a U.S. Federal holiday where we honor those who died for our freedom while serving in the U.S. Armed Forces. Memorial Day previously was celebrated on May 30, but is now observed on the last Monday of May. It is sometimes also called Decoration Day.

It is so important to remember than millions of Americans died in a number of wars to obtain, protect and preserve our freedom.

Some say that President Abraham Lincoln was the founder of Memorial Day back in 1863 when he was at a dedication ceremony at the graves of soldiers at Gettysburg, Pennsylvania. In 1868, General John A. Logan issued a proclamation calling for the day to be observed annually nationwide.

Bob Kapp attended the ceremony at Tanglewood. “I was in the Army during Vietnam, which was very difficult. I left and later joined the Air Force.”

The ceremony began with the presentation of the flags for Army, Navy, Air Force, Marines, Coast Guard and the MIA/POW flag. Dr. Bill Burnham, pastor of Tanglewood Church, said the prayer.

“We remember and honor those who paid the ultimate sacrifice; those that gave their lives for our freedom. Give us all comfort and strength.”

There was complete silence as Nelson played “Taps” in a simulated style, using a bugle and a “Taps” recording from Arlington National Cemetery.

Some people confuse Memorial Day and Veterans Day, but they are not the same.

Memorial Day, celebrated the last Monday in May, commemorates the men and women who died while in military services to their country; those who made the ultimate sacrifice.

Veterans Day, celebrated on Nov. 11, is the day we honor all who served, whether in wartime or peacetime, regardless of whether they died or survived.

The poppy has become a symbol of Memorial Day. In war-torn battlefields, the red field poppy was the first plant to reappear. John McCrae, a Canadian solider and physician, was inspired to write the poem “In Flanders Fields” in 1915 after seeing the poppies bloom again. The red poppy is still a symbol for both loss of life and of recovery and new life.

According to the U.S. Department of Veterans Affairs (va.gov/opa/publications/celebrate/halfstaff.pdf), “On Memorial Day the flag should be flown at half-staff from sunrise until noon only, then raised briskly to the top of the staff until sunset, in honor of the nation’s battle heroes.”

Nelson lowered the flag to half-mast on Friday, May 22, based on orders from President Trump, in memory of the 100,000 people to have died from COVID-19.

A breakdown of the positive cases of coronavirus in Highlands County as of Tuesday, May 26, according to the Florida Department of Health.

The number of positive COVID-19 cases in Highlands County increased by one as of the Tuesday update. Highlands now has a total of 114 confirmed positive cases. The total hospitalizations are 36 with 35 residents and 1 non-resident. The number of deaths remains at 8.

The total number of tests administered in Highlands County is 3,861 with 3,741 negative tests results of which 63 are non-Florida residents. Two results have come back inconclusive and four are waiting for results. The percent of positive cases is 3.0%.

Several residents commute to surrounding counties. Just to the north, in Polk County, where there is a higher population, the total reached 891 positive cases with 261 hospitalizations and 50 deaths. Polk has also administered 18,771 tests, of which 17,845 have come back with negative results.

The city of Immokolee in Collier County had a surprising spike in positive tests with around 200 new cases being reported in just a week. Collier has a total of 1,305 confirmed cases of COVID-19.

Miami-Dade continues to lead the state in positive cases with 17,168 confirmed and 633 deaths.

{span}In this 2013 file photo, Diane Leiner, a Lake Placid resident, looks through caladiums for sale at the Bates Sons & Daughters stand during the annual Caladium Festival. Residents like her will have to buy directly from the growers since the festival has been canceled. {/span}

LAKE PLACID — A 30-year tradition is being halted as the coronavirus causes the cancellation of yet another major event — the Caladium Festival on July 24-26. The 24th annual Car & Bike show and the Dr. Tom McDonald Caladium Festival slated for the same weekend are also canceled.

It is not the first time that the festival has been canceled, but organizers say it is very rare for it to happen.

Since then, the festival has grown from raising awareness for the local colorful tuber foliage to a weekend event. The two-day event that pays homage to everything caladium and brings an estimated tens of thousands of people into the tiny town. Countless hours of volunteer hours are spent preparing for the festival and vendors travel hundreds of miles to be a part of the festivities.

“Organizing a festival this size takes months of planning and preparations,” Bush said. “The Caladium Festival brings over 200 craft and food vendors as well as 20,000 visitors to the area. Our Car & Bike Show is one of the largest and well-attended in the area. Neither of these events would be possible without the hundreds of volunteers willing to give so freely of their time year after year.”

Art contests for adults and children normally take place and Stuart Park is the center of the sales of bulbs and plants. Music and entertainment of all types will be missed this year.

Simply because the festival has been canceled doesn’t mean the growing season has. Normally, growers plan on selling large quantities of their stock at the festival. Contact the following to place an order:

See caladiumfestival.org for more information on the Caladium Festival.

“As the newly hired executive director, this pandemic has made my first few months challenging and different to say the least,” Bush said. “With the backing of the current board of directors, local growers, as well as community support, I feel the right decision is being made to postpone the event until next summer. I appreciate all the dedication and past choices the previous executive director and board of directors have made to insure we can come out of this as just a one-time setback. I know we will return in 2021 with a very successful festival!”

The chamber of commerce is targeting June 8 to reopen. Bush said masks will have to be worn and the CDC’s guidelines followed for social distancing. Only the front lobby will be open. The Mural Society will remain closed. 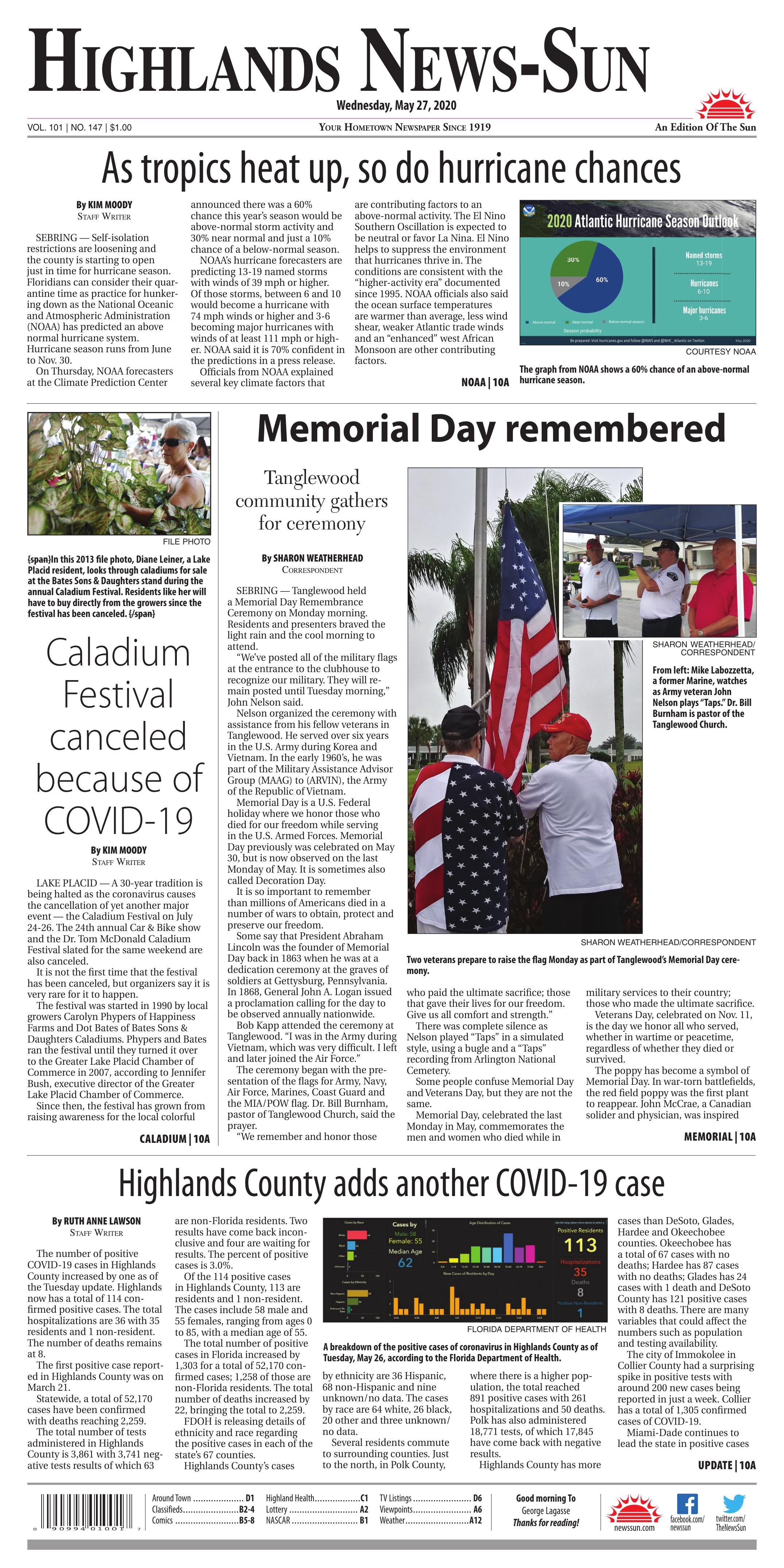