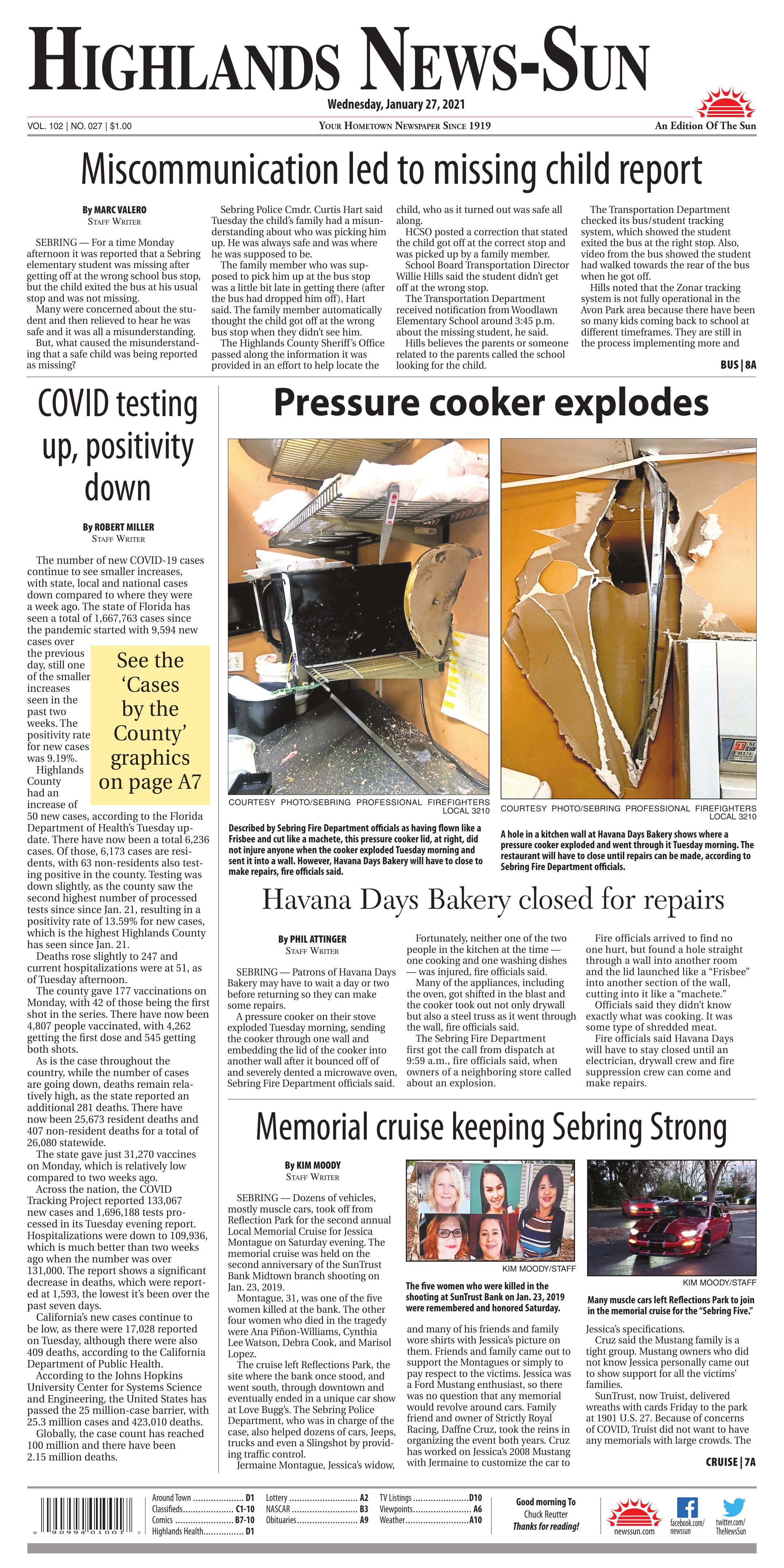 SEBRING — For a time Monday afternoon it was reported that a Sebring elementary student was missing after getting off at the wrong school bus stop, but the child exited the bus at his usual stop and was not missing.

Many were concerned about the student and then relieved to hear he was safe and it was all a misunderstanding.

But, what caused the misunderstanding that a safe child was being reported as missing?

Sebring Police Cmdr. Curtis Hart said Tuesday the child’s family had a misunderstanding about who was picking him up. He was always safe and was where he was supposed to be.

The family member who was supposed to pick him up at the bus stop was a little bit late in getting there (after the bus had dropped him off), Hart said. The family member automatically thought the child got off at the wrong bus stop when they didn’t see him.

The Highlands County Sheriff’s Office passed along the information it was provided in an effort to help locate the child, who as it turned out was safe all along.

HCSO posted a correction that stated the child got off at the correct stop and was picked up by a family member.

School Board Transportation Director Willie Hills said the student didn’t get off at the wrong stop.

The Transportation Department received notification from Woodlawn Elementary School around 3:45 p.m. about the missing student, he said.

Hills believes the parents or someone related to the parents called the school looking for the child.

The Transportation Department checked its bus/student tracking system, which showed the student exited the bus at the right stop. Also, video from the bus showed the student had walked towards the rear of the bus when he got off.

Hills noted that the Zonar tracking system is not fully operational in the Avon Park area because there have been so many kids coming back to school at different timeframes. They are still in the process implementing more and more students into the system.

With the Innovative Learning Environment (ILE) program ending with the first semester, many students were returning to school and riding a bus so they had to be registered into the tracking system.

“It has been tough this year because of the way the school year ended last year. We didn’t collect a lot of the [bus pass] cards back so we are kind of back in the same beginning phases again of recreating cards and getting kids into the system,” he said.

“But, luckily on this bus yesterday [Monday] this young man did have his card; he did scan on the bus; so we knew exactly where he got off at.”

The system is working well and shows when students get on and off the bus, Hills said.

The Zonar bus tracking system was initially used in a trial run at one school for the last six weeks of the 2018-19 school year and then phased in at all schools during the 2019-20 school year.

Each student bus rider is provided with a unique bus pass/identification card, which is attached with a lanyard to their book bags. The time, date and location of each scan, when getting on and off the bus, is logged and transmitted to a secure database for immediate access by the district.

Described by Sebring Fire Department officials as having flown like a Frisbee and cut like a machete, this pressure cooker lid, at right, did not injure anyone when the cooker exploded Tuesday morning and sent it into a wall. However, Havana Days Bakery will have to close to make repairs, fire officials said.

A hole in a kitchen wall at Havana Days Bakery shows where a pressure cooker exploded and went through it Tuesday morning. The restaurant will have to close until repairs can be made, according to Sebring Fire Department officials.

SEBRING — Patrons of Havana Days Bakery may have to wait a day or two before returning so they can make some repairs.

A pressure cooker on their stove exploded Tuesday morning, sending the cooker through one wall and embedding the lid of the cooker into another wall after it bounced off of and severely dented a microwave oven, Sebring Fire Department officials said.

Fortunately, neither one of the two people in the kitchen at the time — one cooking and one washing dishes — was injured, fire officials said.

Many of the appliances, including the oven, got shifted in the blast and the cooker took out not only drywall but also a steel truss as it went through the wall, fire officials said.

The Sebring Fire Department first got the call from dispatch at 9:59 a.m., fire officials said, when owners of a neighboring store called about an explosion.

Fire officials arrived to find no one hurt, but found a hole straight through a wall into another room and the lid launched like a “Frisbee” into another section of the wall, cutting into it like a “machete.”

Officials said they didn’t know exactly what was cooking. It was some type of shredded meat.

Fire officials said Havana Days will have to stay closed until an electrician, drywall crew and fire suppression crew can come and make repairs.

Jessica Montague’s family participated in the memorial cruise Saturday for the “Sebring Five” who were killed in the SunTrust Bank shooting in 2019.

The five women who were killed in the shooting at SunTrust Bank on Jan. 23, 2019 were remembered and honored Saturday.

A Polaris was part of the procession of vehicles in the memorial cruise on Saturday.

Jermaine Montague had his tow truck with his late wife’s car on the flatbed to lead the cruise in her honor.

Many muscle cars left Reflections Park to join in the memorial cruise for the “Sebring Five.”

Flowers were left by friends, families and community members at Reflections Park to honor the five women whose lives were cut short too soon.

An eclectic car show happened at a local gas station after the memorial cruise.

SEBRING — Dozens of vehicles, mostly muscle cars, took off from Reflection Park for the second annual Local Memorial Cruise for Jessica Montague on Saturday evening. The memorial cruise was held on the second anniversary of the SunTrust Bank Midtown branch shooting on Jan. 23, 2019.

Montague, 31, was one of the five women killed at the bank. The other four women who died in the tragedy were Ana Piñon-Williams, Cynthia Lee Watson, Debra Cook, and Marisol Lopez.

The cruise left Reflections Park, the site where the bank once stood, and went south, through downtown and eventually ended in a unique car show at Love Bugg’s. The Sebring Police Department, who was in charge of the case, also helped dozens of cars, Jeeps, trucks and even a Slingshot by providing traffic control.

Jermaine Montague, Jessica’s widow, and many of his friends and family wore shirts with Jessica’s picture on them. Friends and family came out to support the Montagues or simply to pay respect to the victims. Jessica was a Ford Mustang enthusiast, so there was no question that any memorial would revolve around cars. Family friend and owner of Strictly Royal Racing, Daffne Cruz, took the reins in organizing the event both years. Cruz has worked on Jessica’s 2008 Mustang with Jermaine to customize the car to Jessica’s specifications.

Cruz said the Mustang family is a tight group. Mustang owners who did not know Jessica personally came out to show support for all the victims’ families.

SunTrust, now Truist, delivered wreaths with cards Friday to the park at 1901 U.S. 27. Because of concerns of COVID, Truist did not want to have any memorials with large crowds. The bank was razed and the park dedicated to the victims, their families and the entire community ahead of the first anniversary. Mourners added to the wreaths with their own flowers.

Although the event has Montague’s name on it, Jermaine said the ride was for all the women and their families. He knew all the employees at the bank from visiting his wife at work, and would often bring their daughter and have lunch with Jessica.

“It’s hard to speak about my wife,” Jermaine said. “I feel, personally, this is for everyone. I was close with everyone.”

He expressed how he is coping two years after his wife’s death.

“It still feels the same,” Jermaine said. “It feels fresh, like it was just two months ago.”

He said he is moving on to honor his wife and be a good role model for the children.

“It’s easier once you know what you are doing it for. I want to be a good father for them,” he said. “You can do anything if you work hard for it. Nothing is given to you.”

Cruz said last year when they hosted the cruise, she felt at peace seeing Jessica’s Mustang leading the way. She said people from all over reached out and showed up to support the families that lost loved ones.

Cruz urged people to check on others. Because, while life continues, there are those whose lives have been changed forever and are still grieving.

“We wanted to support Jermaine and the family as well as the community,” Cassey Sullivan said. “Plus, it’s Jermaine’s birthday.”

Eddie Mac also came out to support Jermaine. He said he does a lot of work with him.

Jermaine is the owner/operator of Montague Family Towing. Jermaine put Jessica’s Mustang on the flatbed of his tow truck whereas last year it was driven while leading the cruise.

“There were so many people last year, that we lost some people,” Jermaine said. “This year, I thought about putting it on the truck and using the lights to be easier to follow.”

News
COVID testing up, positivity down

The number of new COVID-19 cases continue to see smaller increases, with state, local and national cases down compared to where they were a week ago. The state of Florida has seen a total of 1,667,763 cases since the pandemic started with 9,594 new cases over the previous day, still one of the smaller increases seen in the past two weeks. The positivity rate for new cases was 9.19%.

Highlands County had an increase of 50 new cases, according to the Florida Department of Health’s Tuesday update. There have now been a total 6,236 cases. Of those, 6,173 cases are residents, with 63 non-residents also testing positive in the county. Testing was down slightly, as the county saw the second highest number of processed tests since since Jan. 21, resulting in a positivity rate of 13.59% for new cases, which is the highest Highlands County has seen since Jan. 21.

Deaths rose slightly to 247 and current hospitalizations were at 51, as of Tuesday afternoon.

The county gave 177 vaccinations on Monday, with 42 of those being the first shot in the series. There have now been 4,807 people vaccinated, with 4,262 getting the first dose and 545 getting both shots.

As is the case throughout the country, while the number of cases are going down, deaths remain relatively high, as the state reported an additional 281 deaths. There have now been 25,673 resident deaths and 407 non-resident deaths for a total of 26,080 statewide.

The state gave just 31,270 vaccines on Monday, which is relatively low compared to two weeks ago.

Across the nation, the COVID Tracking Project reported 133,067 new cases and 1,696,188 tests processed in its Tuesday evening report. Hospitalizations were down to 109,936, which is much better than two weeks ago when the number was over 131,000. The report shows a significant decrease in deaths, which were reported at 1,593, the lowest it’s been over the past seven days.

California’s new cases continue to be low, as there were 17,028 reported on Tuesday, although there were also 409 deaths, according to the California Department of Public Health.

According to the Johns Hopkins University Center for Systems Science and Engineering, the United States has passed the 25 million-case barrier, with 25.3 million cases and 423,010 deaths.

Globally, the case count has reached 100 million and there have been 2.15 million deaths.