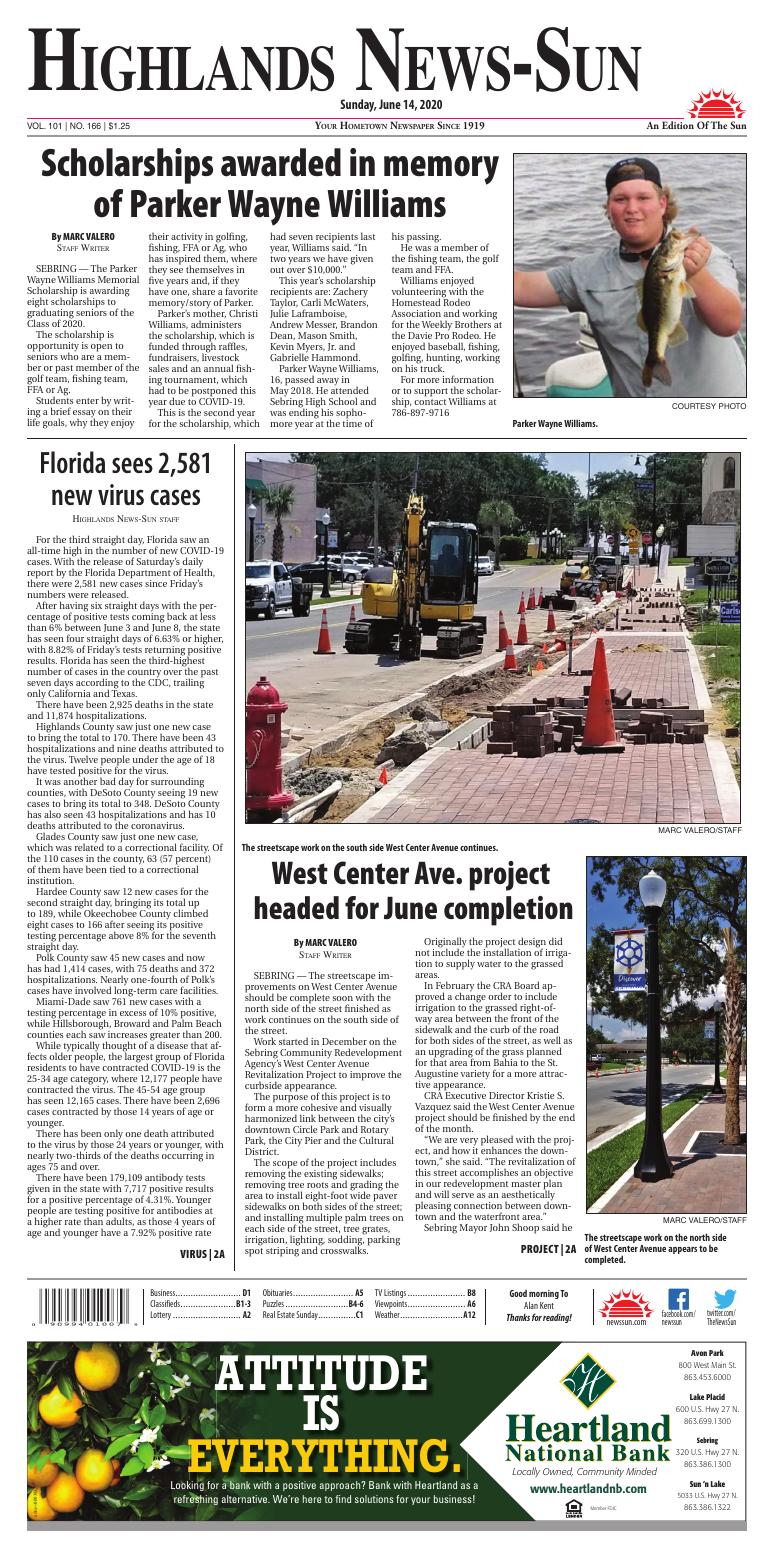 SEBRING — The Parker Wayne Williams Memorial Scholarship is awarding eight scholarships to graduating seniors of the Class of 2020.

The scholarship is opportunity is open to seniors who are a member or past member of the golf team, fishing team, FFA or Ag.

Students enter by writing a brief essay on their life goals, why they enjoy their activity in golfing, fishing, FFA or Ag, who has inspired them, where they see themselves in five years and, if they have one, share a favorite memory/story of Parker.

Parker’s mother, Christi Williams, administers the scholarship, which is funded through raffles, fundraisers, livestock sales and an annual fishing tournament, which had to be postponed this year due to COVID-19.

This is the second year for the scholarship, which had seven recipients last year, Williams said. “In two years we have given out over $10,000.”

Parker Wayne Williams, 16, passed away in May 2018. He attended Sebring High School and was ending his sophomore year at the time of his passing.

He was a member of the fishing team, the golf team and FFA.

Williams enjoyed volunteering with the Homestead Rodeo Association and working for the Weekly Brothers at the Davie Pro Rodeo. He enjoyed baseball, fishing, golfing, hunting, working on his truck.

For more information or to support the scholarship, contact Williams at 786-897-9716

The streetscape work on the south side West Center Avenue continues.

The streetscape work on the north side of West Center Avenue appears to be completed.

The purpose of this project is to form a more cohesive and visually harmonized link between the city’s downtown Circle Park and Rotary Park, the City Pier and the Cultural District.

The scope of the project includes removing the existing sidewalks; removing tree roots and grading the area to install eight-foot wide paver sidewalks on both sides of the street; and installing multiple palm trees on each side of the street, tree grates, irrigation, lighting, sodding, parking spot striping and crosswalks.

Originally the project design did not include the installation of irrigation to supply water to the grassed areas.

In February the CRA Board approved a change order to include irrigation to the grassed right-of-way area between the front of the sidewalk and the curb of the road for both sides of the street, as well as an upgrading of the grass planned for that area from Bahia to the St. Augustine variety for a more attractive appearance.

CRA Executive Director Kristie S. Vazquez said the West Center Avenue project should be finished by the end of the month.

“We are very pleased with the project, and how it enhances the downtown,” she said. “The revitalization of this street accomplishes an objective in our redevelopment master plan and will serve as an aesthetically pleasing connection between downtown and the waterfront area.”

Sebring Mayor John Shoop said he believes the trees and sod are going in soon and the installation of the pavers is nearly complete, but there are a few areas that have to be cut in by sawing the bricks.

The project took a little longer than everybody wanted, but it is moving along, he said. There were some 80-year-old waterlines that needed repair so that work was done when the sidewalk was dug up.

The waterline repair was not in the original plan for the project, but when it was discovered how old the lines were and they were right under the sidewalk, the City made the decision to make the repairs, which backed the project up a little bit, Shoop said.

Also, they were trying to address some of the drainage issues on Lakeview Drive as part of the project, he said.

“If they keep on schedule, by the end of the month we will be in pretty good shape,” Shoop said.

Excavation Point, Inc., of Sebring is the general contractor for the project with Polston Engineering handling the construction administration.

For the third straight day, Florida saw an all-time high in the number of new COVID-19 cases. With the release of Saturday’s daily report by the Florida Department of Health, there were 2,581 new cases since Friday’s numbers were released.

After having six straight days with the percentage of positive tests coming back at less than 6% between June 3 and June 8, the state has seen four straight days of 6.63% or higher, with 8.82% of Friday’s tests returning positive results. Florida has seen the third-highest number of cases in the country over the past seven days according to the CDC, trailing only California and Texas.

Highlands County saw just one new case to bring the total to 170. There have been 43 hospitalizations and nine deaths attributed to the virus. Twelve people under the age of 18 have tested positive for the virus.

It was another bad day for surrounding counties, with DeSoto County seeing 19 new cases to bring its total to 348. DeSoto County has also seen 43 hospitalizations and has 10 deaths attributed to the coronavirus.

Hardee County saw 12 new cases for the second straight day, bringing its total up to 189, while Okeechobee County climbed eight cases to 166 after seeing its positive testing percentage above 8% for the seventh straight day.

Miami-Dade saw 761 new cases with a testing percentage in excess of 10% positive, while Hillsborough, Broward and Palm Beach counties each saw increases greater than 200.

While typically thought of a disease that affects older people, the largest group of Florida residents to have contracted COVID-19 is the 25-34 age category, where 12,177 people have contracted the virus. The 45-54 age group has seen 12,165 cases. There have been 2,696 cases contracted by those 14 years of age or younger.

There has been only one death attributed to the virus by those 24 years or younger, with nearly two-thirds of the deaths occurring in ages 75 and over.

There are two testing events scheduled next week. Testing is free; no insurance is required. 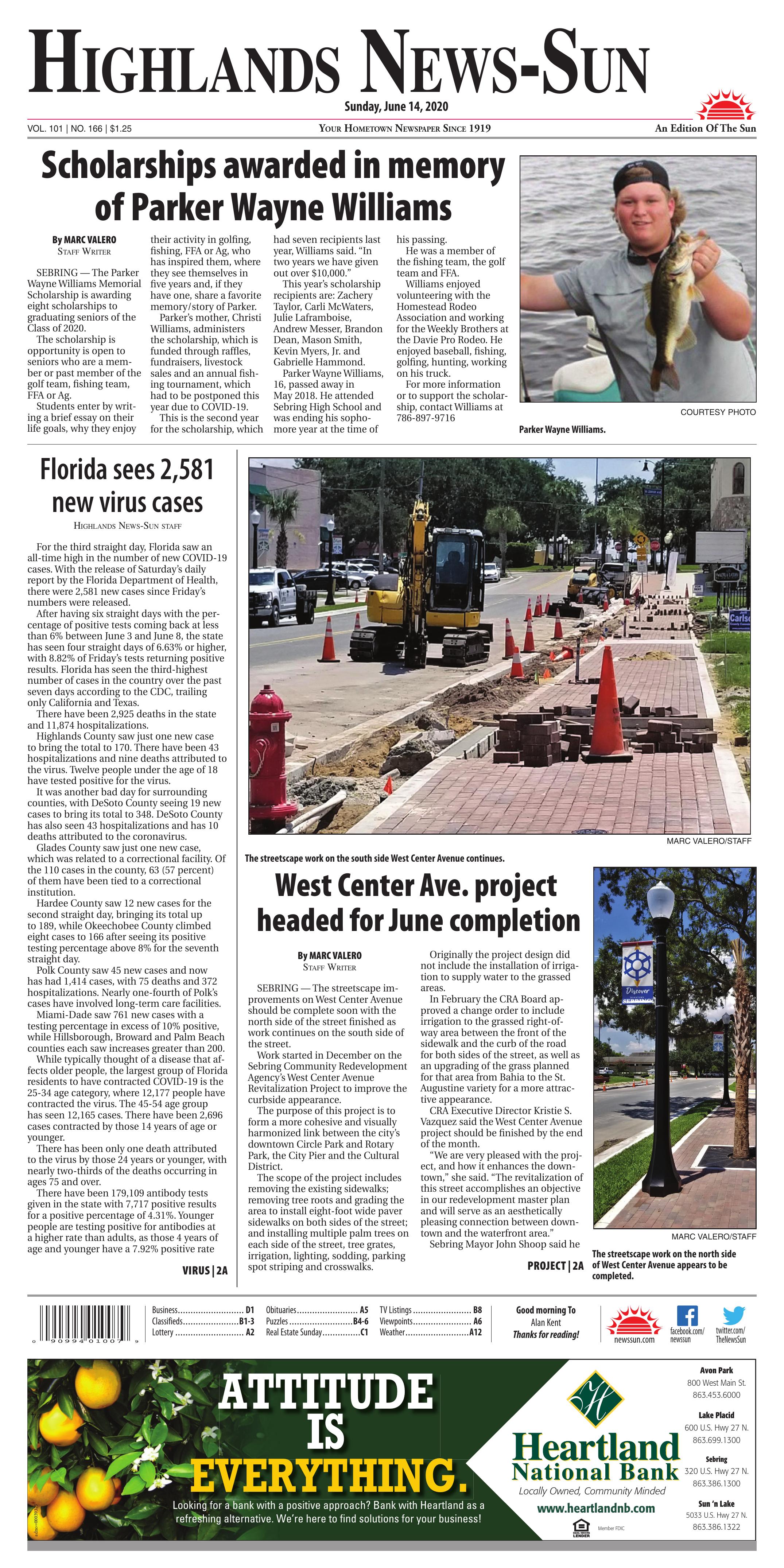