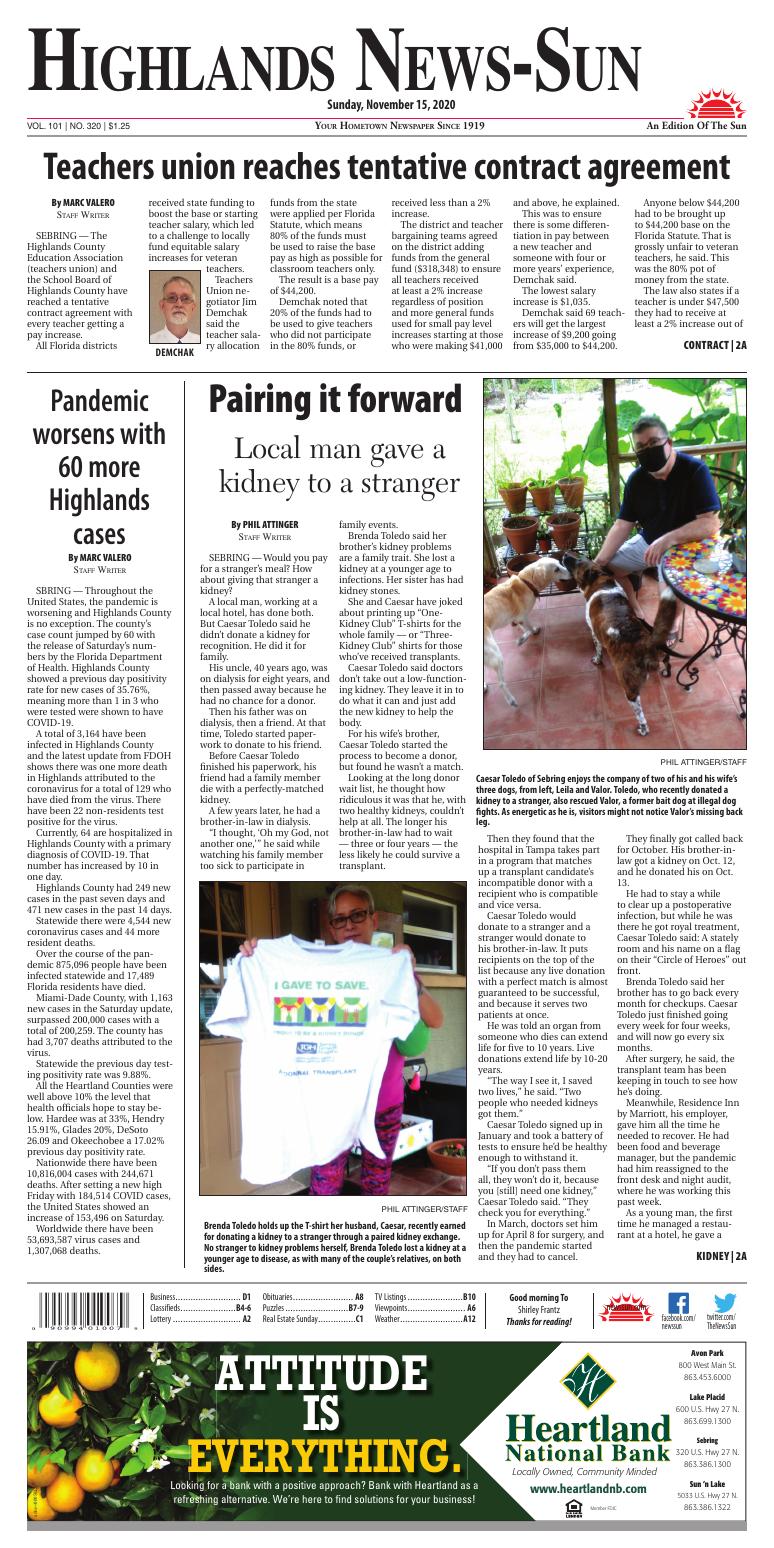 SEBRING — The Highlands County Education Association (teachers union) and the School Board of Highlands County have reached a tentative contract agreement with every teacher getting a pay increase.

All Florida districts received state funding to boost the base or starting teacher salary, which led to a challenge to locally fund equitable salary increases for veteran teachers.

Teachers Union negotiator Jim Demchak said the teacher salary allocation funds from the state were applied per Florida Statute, which means 80% of the funds must be used to raise the base pay as high as possible for classroom teachers only.

Demchak noted that 20% of the funds had to be used to give teachers who did not participate in the 80% funds, or received less than a 2% increase.

The district and teacher bargaining teams agreed on the district adding funds from the general fund ($318,348) to ensure all teachers received at least a 2% increase regardless of position and more general funds used for small pay level increases starting at those who were making $41,000 and above, he explained.

This was to ensure there is some differentiation in pay between a new teacher and someone with four or more years’ experience, Demchak said.

Anyone below $44,200 had to be brought up to $44,200 base on the Florida Statute. That is grossly unfair to veteran teachers, he said. This was the 80% pot of money from the state.

The law also states if a teacher is under $47,500 they had to receive at least a 2% increase out of the 20% pot of money and anything left could be split between the remaining teachers, Demchak explained. For the Highlands District that would have been about $810 per teacher.

Through bargaining, the School Board and the Teachers Union agreed that every teacher needed at least a 2% net increase and small increments were agreed to at least place some salary differential between new teachers and experienced teachers, he said.

All agree it is “not” the best way to treat veteran teachers and the School Board pledges to work on that injustice next year pending what the state budget brings, Demchak said.

“We will have to wait and see.

“Without the union insistence on this differential every teacher with 18 years or less would be making the same $44,200.”

Ratification by the teachers will take place electronically on Thursday and Friday via a link sent out by the district’s Management Information Systems Department, Demchak said.

Deputy Superintendent Andrew Lethbridge said they reached a good agreement that is pending ratification by the teachers.

“We are looking forward to getting the teachers their raises as soon as possible,” he said.

Caesar Toledo of Sebring enjoys the company of two of his and his wife’s three dogs, from left, Leila and Valor. Toledo, who recently donated a kidney to a stranger, also rescued Valor, a former bait dog at illegal dog fights. As energetic as he is, visitors might not notice Valor’s missing back leg.

Brenda Toledo holds up the T-shirt her husband, Caesar, recently earned for donating a kidney to a stranger through a paired kidney exchange. No stranger to kidney problems herself, Brenda Toledo lost a kidney at a younger age to disease, as with many of the couple’s relatives, on both sides.

SEBRING — Would you pay for a stranger’s meal? How about giving that stranger a kidney?

A local man, working at a local hotel, has done both. But Caesar Toledo said he didn’t donate a kidney for recognition. He did it for family.

His uncle, 40 years ago, was on dialysis for eight years, and then passed away because he had no chance for a donor.

Then his father was on dialysis, then a friend. At that time, Toledo started paperwork to donate to his friend.

Before Caesar Toledo finished his paperwork, his friend had a family member die with a perfectly-matched kidney.

A few years later, he had a brother-in-law in dialysis.

“I thought, ‘Oh my God, not another one,’” he said while watching his family member too sick to participate in family events.

Brenda Toledo said her brother’s kidney problems are a family trait. She lost a kidney at a younger age to infections. Her sister has had kidney stones.

Caesar Toledo said doctors don’t take out a low-functioning kidney. They leave it in to do what it can and just add the new kidney to help the body.

For his wife’s brother, Caesar Toledo started the process to become a donor, but found he wasn’t a match.

Looking at the long donor wait list, he thought how ridiculous it was that he, with two healthy kidneys, couldn’t help at all. The longer his brother-in-law had to wait — three or four years — the less likely he could survive a transplant.

Then they found that the hospital in Tampa takes part in a program that matches up a transplant candidate’s incompatible donor with a recipient who is compatible and vice versa.

Caesar Toledo would donate to a stranger and a stranger would donate to his brother-in-law. It puts recipients on the top of the list because any live donation with a perfect match is almost guaranteed to be successful, and because it serves two patients at once.

He was told an organ from someone who dies can extend life for five to 10 years. Live donations extend life by 10-20 years.

“The way I see it, I saved two lives,” he said. “Two people who needed kidneys got them.”

Caesar Toledo signed up in January and took a battery of tests to ensure he’d be healthy enough to withstand it.

“If you don’t pass them all, they won’t do it, because you [still] need one kidney,” Caesar Toledo said. “They check you for everything.”

In March, doctors set him up for April 8 for surgery, and then the pandemic started and they had to cancel.

They finally got called back for October. His brother-in-law got a kidney on Oct. 12, and he donated his on Oct. 13.

He had to stay a while to clear up a postoperative infection, but while he was there he got royal treatment, Caesar Toledo said: A stately room and his name on a flag on their “Circle of Heroes” out front.

Brenda Toledo said her brother has to go back every month for checkups. Caesar Toledo just finished going every week for four weeks, and will now go every six months.

After surgery, he said, the transplant team has been keeping in touch to see how he’s doing.

Meanwhile, Residence Inn by Marriott, his employer, gave him all the time he needed to recover. He had been food and beverage manager, but the pandemic had him reassigned to the front desk and night audit, where he was working this past week.

As a young man, the first time he managed a restaurant at a hotel, he gave a complimentary meal to a person who came in hungry but broke. Management questioned it, but understood, he said.

Soon after, the recipient sent a $100 check to repay him and pay it forward.

At Aldi, he often puts a quarter in a cart to go shopping, then just hands the cart to someone coming in, with the quarter.

Charity truly begins at home, however. He and his wife had four dogs — one recently died of old age — and they can’t stand to euthanize any aged pets.

As energetic as he is, visitors might not notice Valor’s missing back leg. He’s too busy paying forward the Toledos’ love and attention.

SBRING — Throughout the United States, the pandemic is worsening and Highlands County is no exception. The county’s case count jumped by 60 with the release of Saturday’s numbers by the Florida Department of Health. Highlands County showed a previous day positivity rate for new cases of 35.76%, meaning more than 1 in 3 who were tested were shown to have COVID-19.

A total of 3,164 have been infected in Highlands County and the latest update from FDOH shows there was one more death in Highlands attributed to the coronavirus for a total of 129 who have died from the virus. There have been 22 non-residents test positive for the virus.

Currently, 64 are hospitalized in Highlands County with a primary diagnosis of COVID-19. That number has increased by 10 in one day.

Statewide there were 4,544 new coronavirus cases and 44 more resident deaths.

Over the course of the pandemic 875,096 people have been infected statewide and 17,489 Florida residents have died. 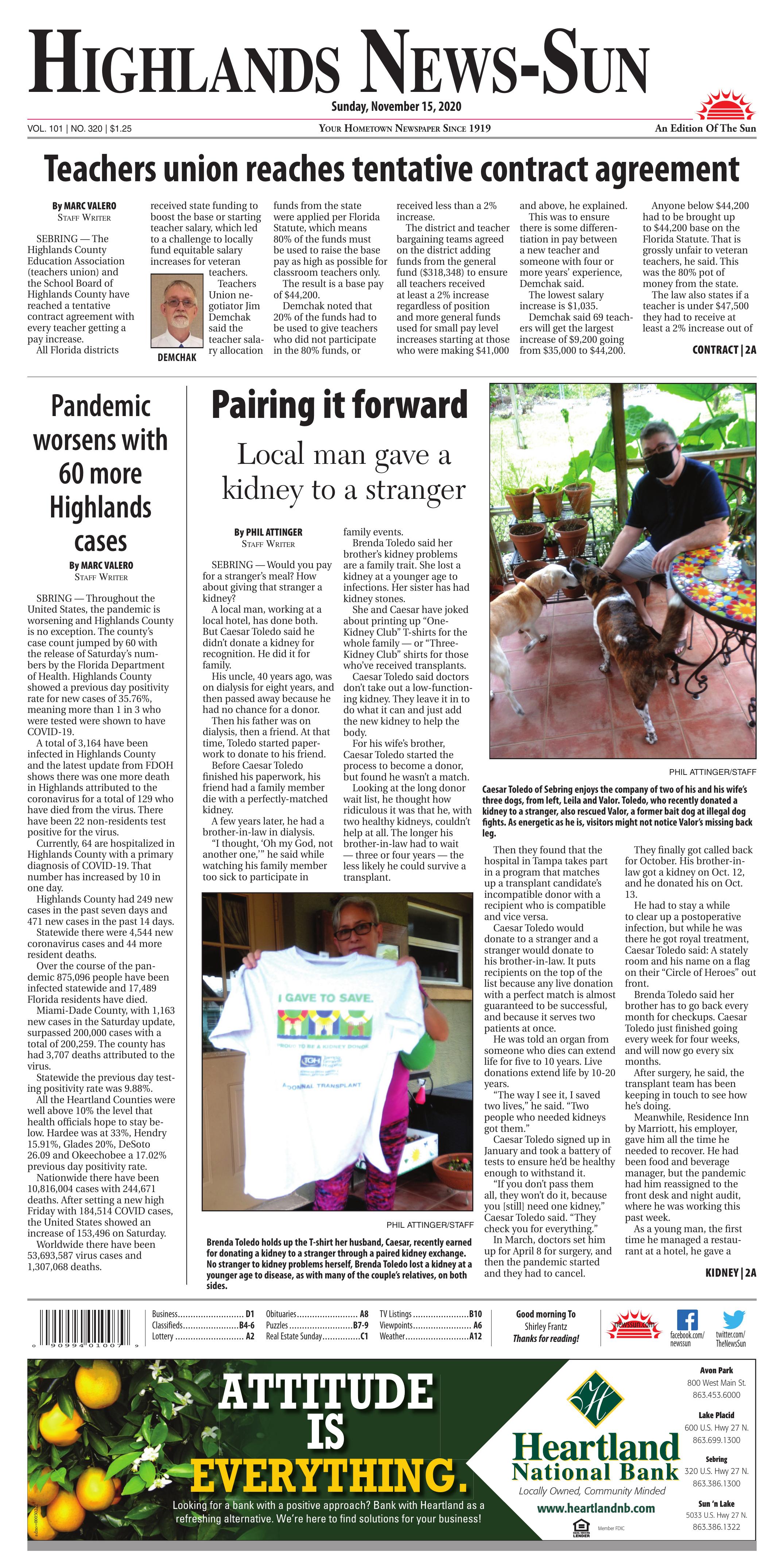