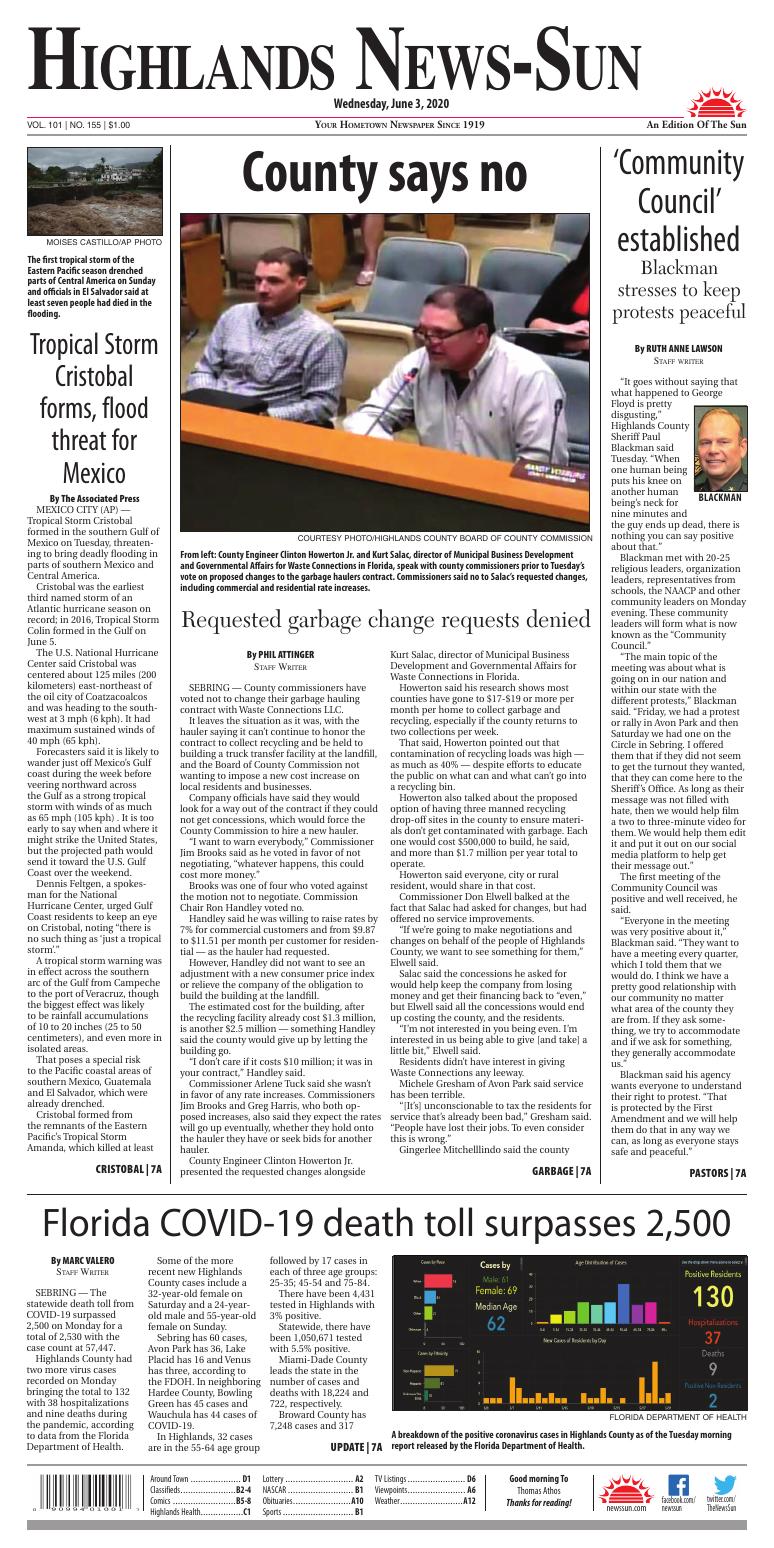 From left: County Engineer Clinton Howerton Jr. and Kurt Salac, director of Municipal Business Development and Governmental Affairs for Waste Connections in Florida, speak with county commissioners prior to Tuesday’s vote on proposed changes to the garbage haulers contract. Commissioners said no to Salac’s requested changes, including commercial and residential rate increases.

SEBRING — County commissioners have voted not to change their garbage hauling contract with Waste Connections LLC.

It leaves the situation as it was, with the hauler saying it can’t continue to honor the contract to collect recycling and be held to building a truck transfer facility at the landfill, and the Board of County Commission not wanting to impose a new cost increase on local residents and businesses.

Company officials have said they would look for a way out of the contract if they could not get concessions, which would force the County Commission to hire a new hauler.

“I want to warn everybody,” Commissioner Jim Brooks said as he voted in favor of not negotiating, “whatever happens, this could cost more money.”

Brooks was one of four who voted against the motion not to negotiate. Commission Chair Ron Handley voted no.

Handley said he was willing to raise rates by 7% for commercial customers and from $9.87 to $11.51 per month per customer for residential — as the hauler had requested.

However, Handley did not want to see an adjustment with a new consumer price index or relieve the company of the obligation to build the building at the landfill.

The estimated cost for the building, after the recycling facility already cost $1.3 million, is another $2.5 million — something Handley said the county would give up by letting the building go.

“I don’t care if it costs $10 million; it was in your contract,” Handley said.

Commissioner Arlene Tuck said she wasn’t in favor of any rate increases. Commissioners Jim Brooks and Greg Harris, who both opposed increases, also said they expect the rates will go up eventually, whether they hold onto the hauler they have or seek bids for another hauler.

Howerton said his research shows most counties have gone to $17-$19 or more per month per home to collect garbage and recycling, especially if the county returns to two collections per week.

That said, Howerton pointed out that contamination of recycling loads was high — as much as 40% — despite efforts to educate the public on what can and what can’t go into a recycling bin.

Howerton also talked about the proposed option of having three manned recycling drop-off sites in the county to ensure materials don’t get contaminated with garbage. Each one would cost $500,000 to build, he said, and more than $1.7 million per year total to operate.

Howerton said everyone, city or rural resident, would share in that cost.

Commissioner Don Elwell balked at the fact that Salac had asked for changes, but had offered no service improvements.

“If we’re going to make negotiations and changes on behalf of the people of Highlands County, we want to see something for them,” Elwell said.

Salac said the concessions he asked for would help keep the company from losing money and get their financing back to “even,” but Elwell said all the concessions would end up costing the county, and the residents.

Residents didn’t have interest in giving Waste Connections any leeway.

Michele Gresham of Avon Park said service has been terrible.

“[It’s] unconscionable to tax the residents for service that’s already been bad,” Gresham said. “People have lost their jobs. To even consider this is wrong.”

Gingerlee Mitchelllindo said the county should have a moratorium on any cost increases in the middle of a pandemic, especially in a county where people earn less than $30,000 per year when business is good.

“The best thing to do is let this business fulfill its contract,” Mitchelllindo said. “We don’t need [to do] anything else.”

A breakdown of the positive coronavirus cases in Highlands County as of the Tuesday morning report released by the Florida Department of Health.

Highlands County had two more virus cases recorded on Monday bringing the total to 132 with 38 hospitalizations and nine deaths during the pandemic, according to data from the Florida Department of Health.

Sebring has 60 cases, Avon Park has 36, Lake Placid has 16 and Venus has three, according to the FDOH. In neighboring Hardee County, Bowling Green has 45 cases and Wauchula has 44 cases of COVID-19.

There have been 4,431 tested in Highlands with 3% positive.

Miami-Dade County leads the state in the number of cases and deaths with 18,224 and 722, respectively.

“It goes without saying that what happened to George Floyd is pretty disgusting,” Highlands County Sheriff Paul Blackman said Tuesday. “When one human being puts his knee on another human being’s neck for nine minutes and the guy ends up dead, there is nothing you can say positive about that.”

Blackman met with 20-25 religious leaders, organization leaders, representatives from schools, the NAACP and other community leaders on Monday evening. These community leaders will form what is now known as the “Community Council.”

“The main topic of the meeting was about what is going on in our nation and within our state with the different protests,” Blackman said. “Friday, we had a protest or rally in Avon Park and then Saturday we had one on the Circle in Sebring. I offered them that if they did not seem to get the turnout they wanted, that they can come here to the Sheriff’s Office. As long as their message was not filled with hate, then we would help film a two to three-minute video for them. We would help them edit it and put it out on our social media platform to help get their message out.”

The first meeting of the Community Council was positive and well received, he said.

“Everyone in the meeting was very positive about it,” Blackman said. “They want to have a meeting every quarter, which I told them that we would do. I think we have a pretty good relationship with our community no matter what area of the county they are from. If they ask something, we try to accommodate and if we ask for something, they generally accommodate us.”

Blackman said his agency wants everyone to understand their right to protest. “That is protected by the First Amendment and we will help them do that in any way we can, as long as everyone stays safe and peaceful.”

One of the members of the Community Council is Rev. George Miller of Emmanuel United Church of Christ (EUCC) and a member of the NAACP.

“The meeting was a proactive way for Sheriff Blackman to gather various leaders from across the community,” Miller said. “He wanted to be as transparent as possible and shared a lot of information, facts and incite on how they hire people, how they deal with incidents that are aggressive or with inappropriate behavior. He talked about the training they go through and after that he opened the floor for us to ask any and all questions. That was rather powerful because he allowed us to say whatever we needed to say. He heard and responded to everything we said.”

Miller said he took away from the meeting that Blackman loves the people of Highlands County. “His number one priority is to ensure that not one person has to experience mistreatment and injustice at the hands of a police officer. If a citizen witnesses it, he invites them to record it and report it immediately so it can be handled.”

Miller said he feels Blackman is doing everything he can to not impose a curfew and keep everyone safe.

Miller was the organizer of the gathering last weekend and is planning another family event this Thursday at EUCC.

“When I talked to the police and invited them to join the protest that I organized, they decided not to come to give us freedom and so that people would not feel like they are being supervised. However, I was given the assurance that if anything were to happen, they would be there within minutes. Sheriff Blackman seemed to articulate the same thing. He is offering up the parking lot for anyone to organize anything, that way they are safe and out of the hot sun. I think that is a way of saying ‘we are working with you, we are not going to stifle your voice but we are going to keep you safe.’”

The Family Walk with Hope event will be held at EUCC starting at 11 a.m. Thursday at 315 Hope St. in Sebring.

“The Family Walk with Hope is a peaceful family event,” Miller said. “The fire department and police will be participating in the event as well. We will meet at the church; there will be chalk for the kids to draw on the parking lot and we are going to walk down to the fire department on Hammock Road. We are hoping the firemen and women will be there to cheer on the kids. What we will do is say his name, George Floyd, and ask what do we want which is ‘Hope, Peace and Love’.

“We have parents that told us that they would love for their kids to have the experience but did not want them to be in harm’s way. No one really knows what to expect at a protest, so this one is a family event. The sooner we can give our children the tools to proactively and peacefully respond, the better off they will be. ”

The first tropical storm of the Eastern Pacific season drenched parts of Central America on Sunday and officials in El Salvador said at least seven people had died in the flooding.

Cristobal was the earliest third named storm of an Atlantic hurricane season on record; in 2016, Tropical Storm Colin formed in the Gulf on June 5.

The U.S. National Hurricane Center said Cristobal was centered about 125 miles (200 kilometers) east-northeast of the oil city of Coatzacoalcos and was heading to the southwest at 3 mph (6 kph). It had maximum sustained winds of 40 mph (65 kph).

Forecasters said it is likely to wander just off Mexico’s Gulf coast during the week before veering northward across the Gulf as a strong tropical storm with winds of as much as 65 mph (105 kph) . It is too early to say when and where it might strike the United States, but the projected path would send it toward the U.S. Gulf Coast over the weekend.

Dennis Feltgen, a spokesman for the National Hurricane Center, urged Gulf Coast residents to keep an eye on Cristobal, noting “there is no such thing as ‘just a tropical storm’.”

A tropical storm warning was in effect across the southern arc of the Gulf from Campeche to the port of Veracruz, though the biggest effect was likely to be rainfall accumulations of 10 to 20 inches (25 to 50 centimeters), and even more in isolated areas.

That poses a special risk to the Pacific coastal areas of southern Mexico, Guatemala and El Salvador, which were already drenched.

Cristobal formed from the remnants of the Eastern Pacific’s Tropical Storm Amanda, which killed at least 17 people as it moved across El Salvador and Guatemala over the weekend.

Because Amanda broke up after crossing over Guatemala and El Salvador into the Gulf, where Cristobal formed, it is not technically a “cross-over”storm that moved from the Pacific to the Atlantic, though that has occurred in the past.

But Amanda and Cristobal will soak some of the same areas, Feltgen noted.

“Unfortunately, the rain is falling in the same general area,” said Feltgen. “There are areas that will probably be measuring the rain in feet, not inches. ... That is catastrophic.” 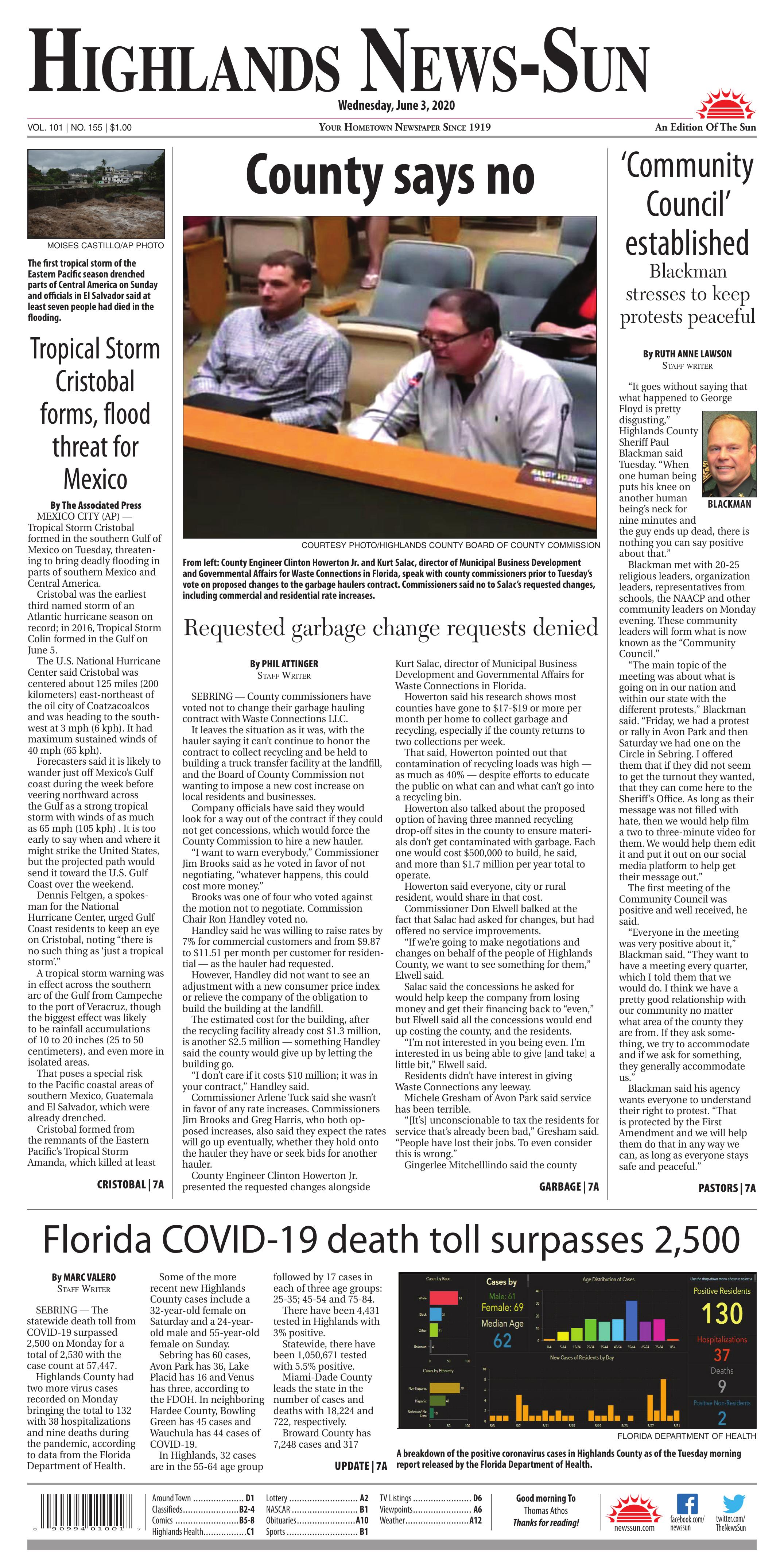