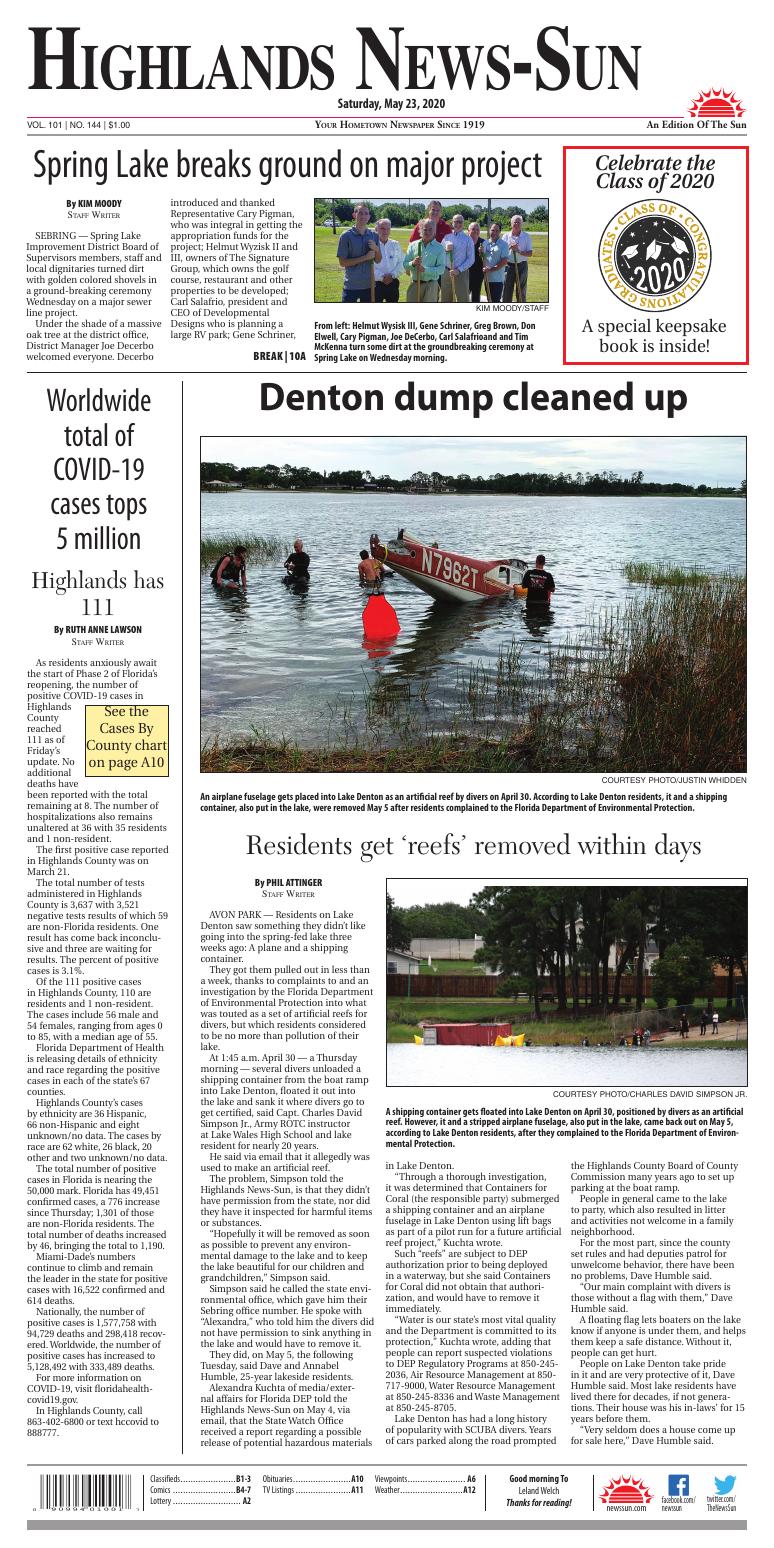 Under the shade of a massive oak tree at the district office, District Manager Joe Decerbo welcomed everyone. Decerbo introduced and thanked Representative Cary Pigman, who was integral in getting the appropriation funds for the project; Helmut Wyzisk II and III, owners of The Signature Group, which owns the golf course, restaurant and other properties to be developed; Carl Salafrio, president and CEO of Developmental Designs who is planning a large RV park; Gene Schriner, president of Craig A. Smith Engineering, the district engineer who is overseeing the project; Don Elwell, county commissioner and resident; Tim McKenna, president of the SLID Board of Supervisors, and others. DeCerbo said without the tireless efforts of those men and many others, the project would not have been possible.

“None of this development would have occurred if we had not handled our storm water retention and storage; built a new sewer plant; acquired a second water plant; renovated our pump station; and secured the appropriation for 98,” DeCerbo said. “We have made Spring Lake a very valuable area for development, and we anticipate rapid growth over the next three to five years.”

The project was years in the making. In fact, Pigman championed the project in the legislature for two years before finally getting the legislative appropriation for $1.1 million. Senator Ben Albritton supported the project as well.

The project will have Excavation Point laying about 15,000 feet of sewer infrastructure along heavily traveled U.S. 98. The project will bring the lines from Floral Drive to the west and connect locations to the south by running under U.S. 98. The lines will lay past Arbuckle Creek to the east to Village 10, which is slated to have nearly 300 RV units with many amenities. Permitting is currently taking place for the village.

The sewer lines will tie into existing lines that run from the relatively new wastewater treatment plant that cost $3.345 million. The wastewater treatment plant was built with a 30-year no interest loan from the state. Currently, the plant services over 300 users and will also service 1,500 future businesses and residences being built on U.S. 98.

“Joe DeCerbo and Spring Lake had already proven to be good stewards of their grant money,” Pigman told the crowd. “There is a growing realization that the state needs to provide some contribution, some sort of investment to help on water quality. We can’t do it just as local government and we can’t fix the sins of everything in the 1950s, 1960s and 1940s in terms of just getting rid of water and not taking care of the quality of it.”

Pigman also said water quality is as important an investment as education and health care. Spring Lake’s success should be an example to other districts across the state, he said.

DeCerbo said the project will begin in earnest in a couple of weeks. Construction will be 12-15 feet off the right of way, so traffic is not expected to be interrupted. The project should be completed by September.

A shipping container gets floated into Lake Denton on April 30, positioned by divers as an artificial reef. However, it and a stripped airplane fuselage, also put in the lake, came back out on May 5, according to Lake Denton residents, after they complained to the Florida Department of Environmental Protection.

An airplane fuselage gets placed into Lake Denton as an artificial reef by divers on April 30. According to Lake Denton residents, it and a shipping container, also put in the lake, were removed May 5 after residents complained to the Florida Department of Environmental Protection.

A team of divers prepares to back a shipping container into Lake Denton on April 30 as an artificial reef. It was removed five days later as a result of complaints by Lake Denton residents to the Florida Department of Environmental Protection.

AVON PARK — Residents on Lake Denton saw something they didn’t like going into the spring-fed lake three weeks ago: A plane and a shipping container.

They got them pulled out in less than a week, thanks to complaints to and an investigation by the Florida Department of Environmental Protection into what was touted as a set of artificial reefs for divers, but which residents considered to be no more than pollution of their lake.

At 1:45 a.m. April 30 — a Thursday morning — several divers unloaded a shipping container from the boat ramp into Lake Denton, floated it out into the lake and sank it where divers go to get certified, said Capt. Charles David Simpson Jr., Army ROTC instructor at Lake Wales High School and lake resident for nearly 20 years.

He said via email that it allegedly was used to make an artificial reef.

The problem, Simpson told the Highlands News-Sun, is that they didn’t have permission from the state, nor did they have it inspected for harmful items or substances.

“Hopefully it will be removed as soon as possible to prevent any environmental damage to the lake and to keep the lake beautiful for our children and grandchildren,” Simpson said.

Simpson said he called the state environmental office, which gave him their Sebring office number. He spoke with “Alexandra,” who told him the divers did not have permission to sink anything in the lake and would have to remove it.

They did, on May 5, the following Tuesday, said Dave and Annabel Humble, 25-year lakeside residents.

Alexandra Kuchta of media/external affairs for Florida DEP told the Highlands News-Sun on May 4, via email, that the State Watch Office received a report regarding a possible release of potential hazardous materials in Lake Denton.

“Through a thorough investigation, it was determined that Containers for Coral (the responsible party) submerged a shipping container and an airplane fuselage in Lake Denton using lift bags as part of a pilot run for a future artificial reef project,” Kuchta wrote.

Such “reefs” are subject to DEP authorization prior to being deployed in a waterway, but she said Containers for Coral did not obtain that authorization, and would have to remove it immediately.

Lake Denton has had a long history of popularity with SCUBA divers. Years of cars parked along the road prompted the Highlands County Board of County Commission many years ago to set up parking at the boat ramp.

People in general came to the lake to party, which also resulted in litter and activities not welcome in a family neighborhood.

For the most part, since the county set rules and had deputies patrol for unwelcome behavior, there have been no problems, Dave Humble said.

“Our main complaint with divers is those without a flag with them,” Dave Humble said.

A floating flag lets boaters on the lake know if anyone is under them, and helps them keep a safe distance. Without it, people can get hurt.

People on Lake Denton take pride in it and are very protective of it, Dave Humble said. Most lake residents have lived there for decades, if not generations. Their house was his in-laws’ for 15 years before them.

“Very seldom does a house come up for sale here,” Dave Humble said.

A breakdown of positive coronavirus cases in Highlands County as of the May 22 report released by Florida Department of Health.

As residents anxiously await the start of Phase 2 of Florida’s reopening, the number of positive COVID-19 cases in Highlands County reached 111 as of Friday’s update. No additional deaths have been reported with the total remaining at 8. The number of hospitalizations also remains unaltered at 36 with 35 residents and 1 non-resident.

The total number of tests administered in Highlands County is 3,637 with 3,521 negative tests results of which 59 are non-Florida residents. One result has come back inconclusive and three are waiting for results. The percent of positive cases is 3.1%.

Florida Department of Health is releasing details of ethnicity and race regarding the positive cases in each of the state’s 67 counties.

The total number of positive cases in Florida is nearing the 50,000 mark. Florida has 49,451 confirmed cases, a 776 increase since Thursday; 1,301 of those are non-Florida residents. The total number of deaths increased by 46, bringing the total to 1,190.

Miami-Dade’s numbers continue to climb and remain the leader in the state for positive cases with 16,522 confirmed and 614 deaths. 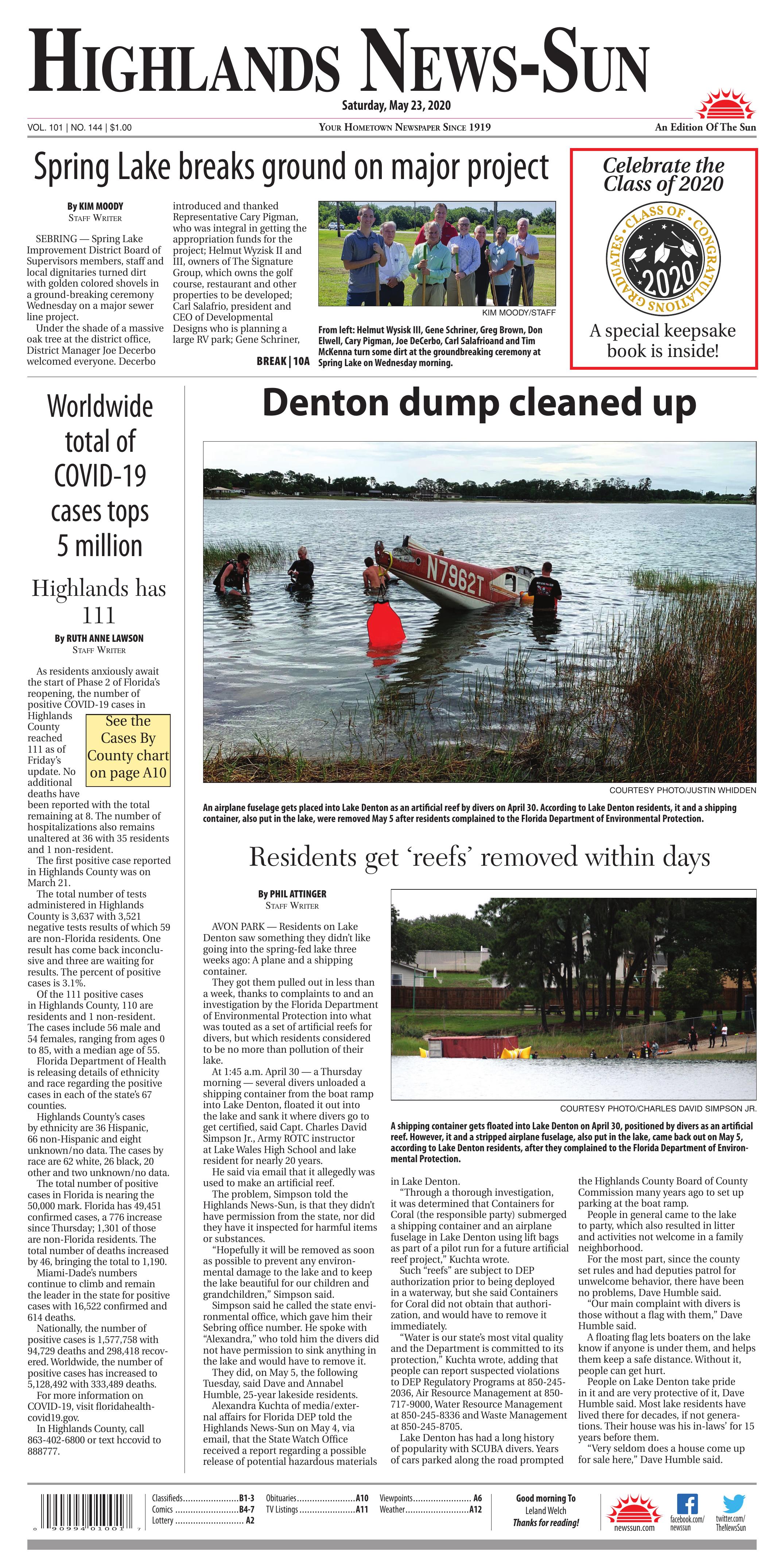