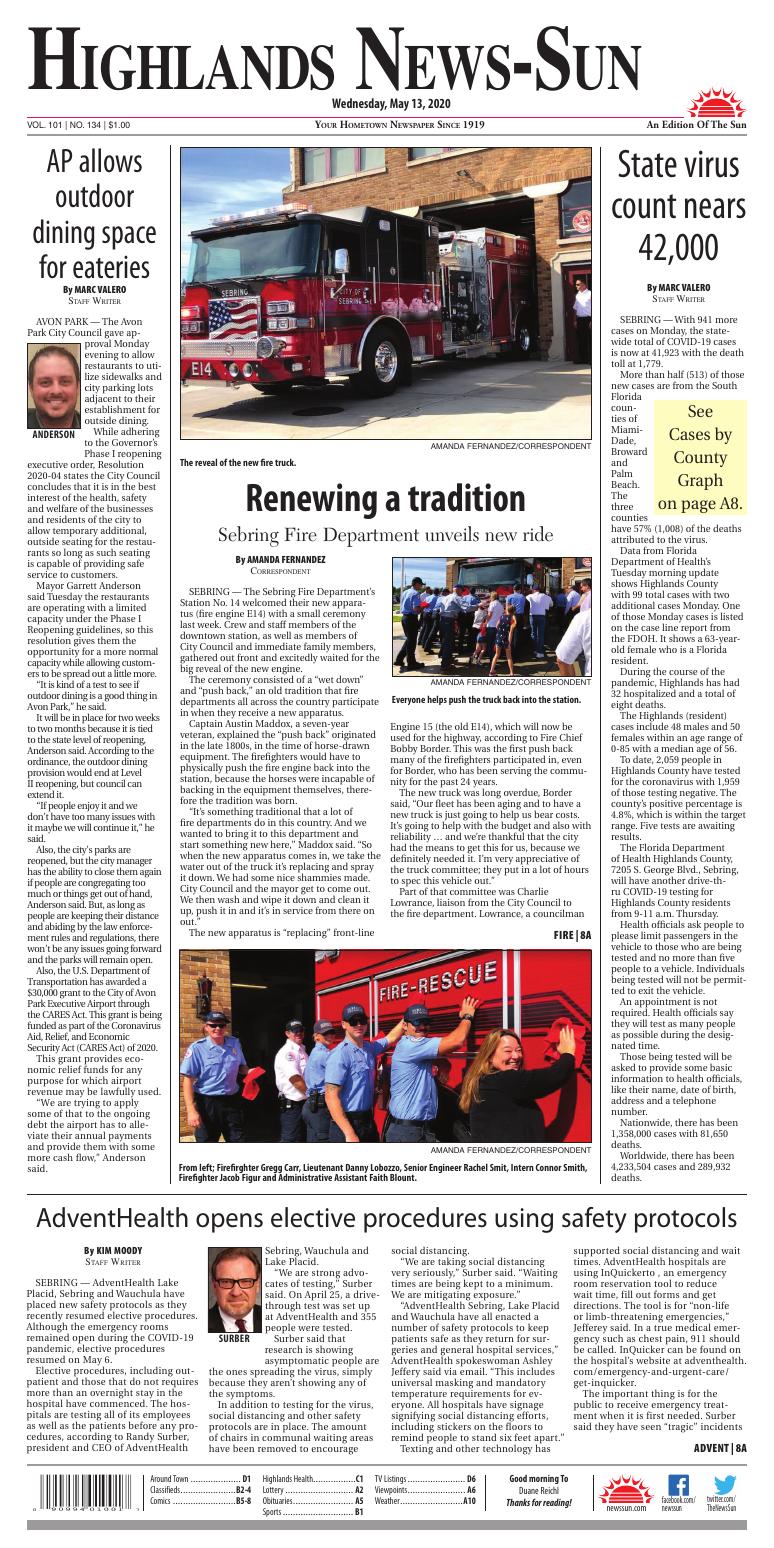 The reveal of the new fire truck.

Firefighters with their new ride.

Everyone helps push the truck back into the station.

Towels that were given out.

SEBRING — The Sebring Fire Department’s Station No. 14 welcomed their new apparatus (fire engine E14) with a small ceremony last week. Crew and staff members of the downtown station, as well as members of City Council and immediate family members, gathered out front and excitedly waited for the big reveal of the new engine.

The ceremony consisted of a “wet down” and “push back,” an old tradition that fire departments all across the country participate in when they receive a new apparatus.

Captain Austin Maddox, a seven-year veteran, explained the “push back” originated in the late 1800s, in the time of horse-drawn equipment. The firefighters would have to physically push the fire engine back into the station, because the horses were incapable of backing in the equipment themselves, therefore the tradition was born.

“It’s something traditional that a lot of fire departments do in this country. And we wanted to bring it to this department and start something new here,” Maddox said. “So when the new apparatus comes in, we take the water out of the truck it’s replacing and spray it down. We had some nice shammies made. City Council and the mayor get to come out. We then wash and wipe it down and clean it up, push it in and it’s in service from there on out.”

The new apparatus is “replacing” front-line Engine 15 (the old E14), which will now be used for the highway, according to Fire Chief Bobby Border. This was the first push back many of the firefighters participated in, even for Border, who has been serving the community for the past 24 years.

The new truck was long overdue, Border said, “Our fleet has been aging and to have a new truck is just going to help us bear costs. It’s going to help with the budget and also with reliability … and we’re thankful that the city had the means to get this for us, because we definitely needed it. I’m very appreciative of the truck committee; they put in a lot of hours to spec this vehicle out.”

Part of that committee was Charlie Lowrance, liaison from the City Council to the fire department. Lowrance, a councilman for the past four years, previously worked for Miami Dade Fire Rescue as a captain and station commander for more than 29 years.

“The fire department is one of the instrumental departments of the city, they’re out there doing this stuff everyday, not just fire, but rescue as well. The fire department responds as first responders to car accidents and things like that, so we have to have equipment,” Lowrance said. “The men and the people are extremely important, can’t do it without them, but the equipment is also very important and we have to keep our equipment updated.

“So usually about every 15 years we have to replace a truck, and we’re kind of trying to schedule for every five years to replace one of the first-line apparatuses.”

It took at least a year between getting the money and go ahead from City Council to get the truck rolling into the station. Originally the fire department had big plans for revealing Engine 14 to the public and having the community participate in the ceremony, but due to the current COVID-19 crisis had to scale things back and settled for something a bit more personal.

Sebring Mayor John Shoop expressed how great it was not only for the community but for the fire department to restart this tradition.

“We have a great fire department,” Shoop said. “These men and women are so dedicated and do a wonderful job. It’s just a testament to what they can do.”

When the bay doors opened everyone happily applauded the reveal of Engine 14 and, before the ceremony began, all turned to the American flag to state the Pledge of Allegiance.

Border thanked everyone for coming out and also expressed his appreciation to all who took part in being able to achieve getting Engine 14. That was followed by a short speech by Maddox and a blessing from Pastor Dr. Derek Lambert from First Baptist Church. Lambert also had everyone take a moment of silence for the injured and fallen firefighters in our nation.

Anyone who wanted to participate in wetting down the truck was welcomed to do so. Maddox then had all participants grab a bright red shammy towel that was embroidered with the words “Sebring Fire 2020 Wet-Down” and everyone helped in drying off the engine.

Finally after completing the wet-down, all gathered to the front of Engine 14 and proceeded to push it back into the station. The ceremony was joyfully completed and Engine 14 now sits as the new front liner for the station that is already rich with history, waiting to serve the Sebring community.

SEBRING — AdventHealth Lake Placid, Sebring and Wauchula have placed new safety protocols as they recently resumed elective procedures. Although the emergency rooms remained open during the COVID-19 pandemic, elective procedures resumed on May 6.

Elective procedures, including outpatient and those that do not requires more than an overnight stay in the hospital have commenced. The hospitals are testing all of its employees as well as the patients before any procedures, according to Randy Surber, president and CEO of AdventHealth Sebring, Wauchula and Lake Placid.

“We are strong advocates of testing,” Surber said. On April 25, a drive-through test was set up at AdventHealth and 355 people were tested.

Surber said that research is showing asymptomatic people are the ones spreading the virus, simply because they aren’t showing any of the symptoms.

In addition to testing for the virus, social distancing and other safety protocols are in place. The amount of chairs in communal waiting areas have been removed to encourage social distancing.

“We are taking social distancing very seriously,” Surber said. “Waiting times are being kept to a minimum. We are mitigating exposure.”

“AdventHealth Sebring, Lake Placid and Wauchula have all enacted a number of safety protocols to keep patients safe as they return for surgeries and general hospital services,” AdventHealth spokeswoman Ashley Jeffery said via email. “This includes universal masking and mandatory temperature requirements for everyone. All hospitals have signage signifying social distancing efforts, including stickers on the floors to remind people to stand six feet apart.”

Texting and other technology has supported social distancing and wait times. AdventHealth hospitals are using InQuickerto , an emergency room reservation tool to reduce wait time, fill out forms and get directions. The tool is for “non-life or limb-threatening emergencies,” Jefferey said. In a true medical emergency such as chest pain, 911 should be called. InQuicker can be found on the hospital’s website at adventhealth.com/emergency-and-urgent-care/get-inquicker.

The important thing is for the public to receive emergency treatment when it is first needed. Surber said they have seen “tragic” incidents because people have waited to seek treatment because they feared exposure to the virus at the hospital.

Those who have respiratory symptoms can stay in their cars and be seen curbside at Prompt Care at 4421 Sun ‘N Lake Blvd. daily. Telemed services are being provided as well. A drive-through lab has been established at the hospital for convenience while using social distancing.

Although the county is slowly opening, Surber urged the public to be diligent and follow the CDC guidelines especially if they are over 65 years of age or if they have underlying medical complications such as an autoimmune deficiency, and cancer treatments. Stay at home when possible, telework and telemed doctor appointments when possible.

Testing at AdventHealth Wauchula at 735 S. 5th Ave. will take place from 10 a.m. to 2 p.m. Thursday, May 14. The hospital will not turn anyone away regardless of insurance and there will be no out-of-pocket charge to the patient for the testing.

“While a doctor’s order is no longer required for testing, AdventHealth is encouraging patients to pre-register at AdventHealth Coronavirus Testing.com or 866-694-5503 prior to arrival,” a press release said.

While adhering to the Governor’s Phase I reopening executive order, Resolution 2020-04 states the City Council concludes that it is in the best interest of the health, safety and welfare of the businesses and residents of the city to allow temporary additional, outside seating for the restaurants so long as such seating is capable of providing safe service to customers.

Mayor Garrett Anderson said Tuesday the restaurants are operating with a limited capacity under the Phase I Reopening guidelines, so this resolution gives them the opportunity for a more normal capacity while allowing customers to be spread out a little more.

“It is kind of a test to see if outdoor dining is a good thing in Avon Park,” he said.

It will be in place for two weeks to two months because it is tied to the state level of reopening, Anderson said. According to the ordinance, the outdoor dining provision would end at Level II reopening, but council can extend it.

“If people enjoy it and we don’t have too many issues with it maybe we will continue it,” he said.

Also, the city’s parks are reopened, but the city manager has the ability to close them again if people are congregating too much or things get out of hand, Anderson said. But, as long as people are keeping their distance and abiding by the law enforcement rules and regulations, there won’t be any issues going forward and the parks will remain open.

Also, the U.S. Department of Transportation has awarded a $30,000 grant to the City of Avon Park Executive Airport through the CARES Act. This grant is being funded as part of the Coronavirus Aid, Relief, and Economic Security Act (CARES Act) of 2020.

This grant provides economic relief funds for any purpose for which airport revenue may be lawfully used.

“We are trying to apply some of that to the ongoing debt the airport has to alleviate their annual payments and provide them with some more cash flow,” Anderson said.

A breakdown of the positive coronavirus cases in Highlands County as of Tuesday, May 12, according to the Florida Department of Highlands.

More than half (513) of those new cases are from the South Florida counties of Miami-Dade, Broward and Palm Beach. The three counties have 57% (1,008) of the deaths attributed to the virus.

Data from Florida Department of Health’s Tuesday morning update shows Highlands County with 99 total cases with two additional cases Monday. One of those Monday cases is listed on the case line report from the FDOH. It shows a 63-year-old female who is a Florida resident.

During the course of the pandemic, Highlands has had 32 hospitalized and a total of eight deaths.

The Highlands (resident) cases include 48 males and 50 females within an age range of 0-85 with a median age of 56.

To date, 2,059 people in Highlands County have tested for the coronavirus with 1,959 of those testing negative. The county’s positive percentage is 4.8%, which is within the target range. Five tests are awaiting results.

Health officials ask people to please limit passengers in the vehicle to those who are being tested and no more than five people to a vehicle. Individuals being tested will not be permitted to exit the vehicle.

An appointment is not required. Health officials say they will test as many people as possible during the designated time.

Those being tested will be asked to provide some basic information to health officials, like their name, date of birth, address and a telephone number. 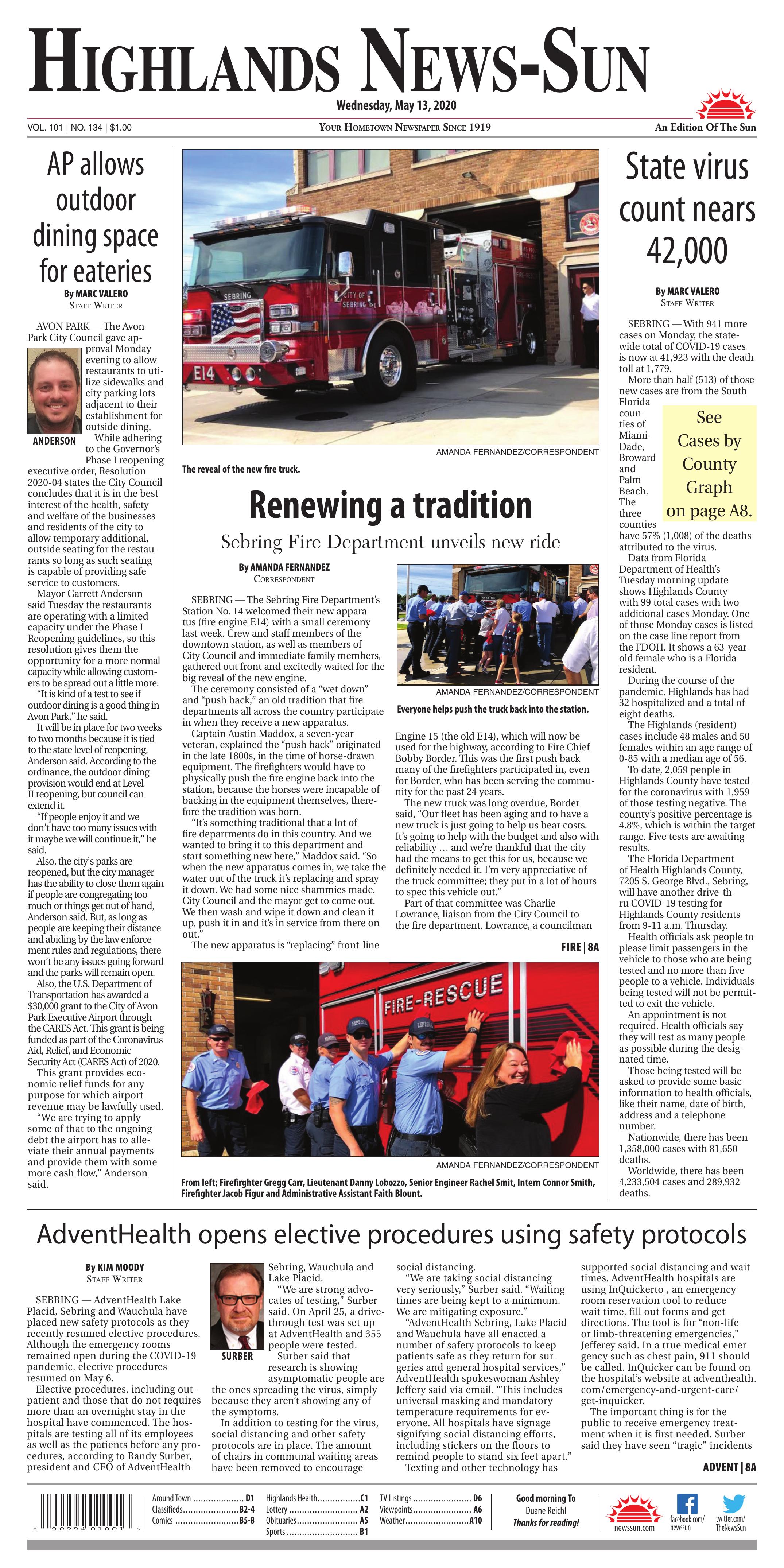