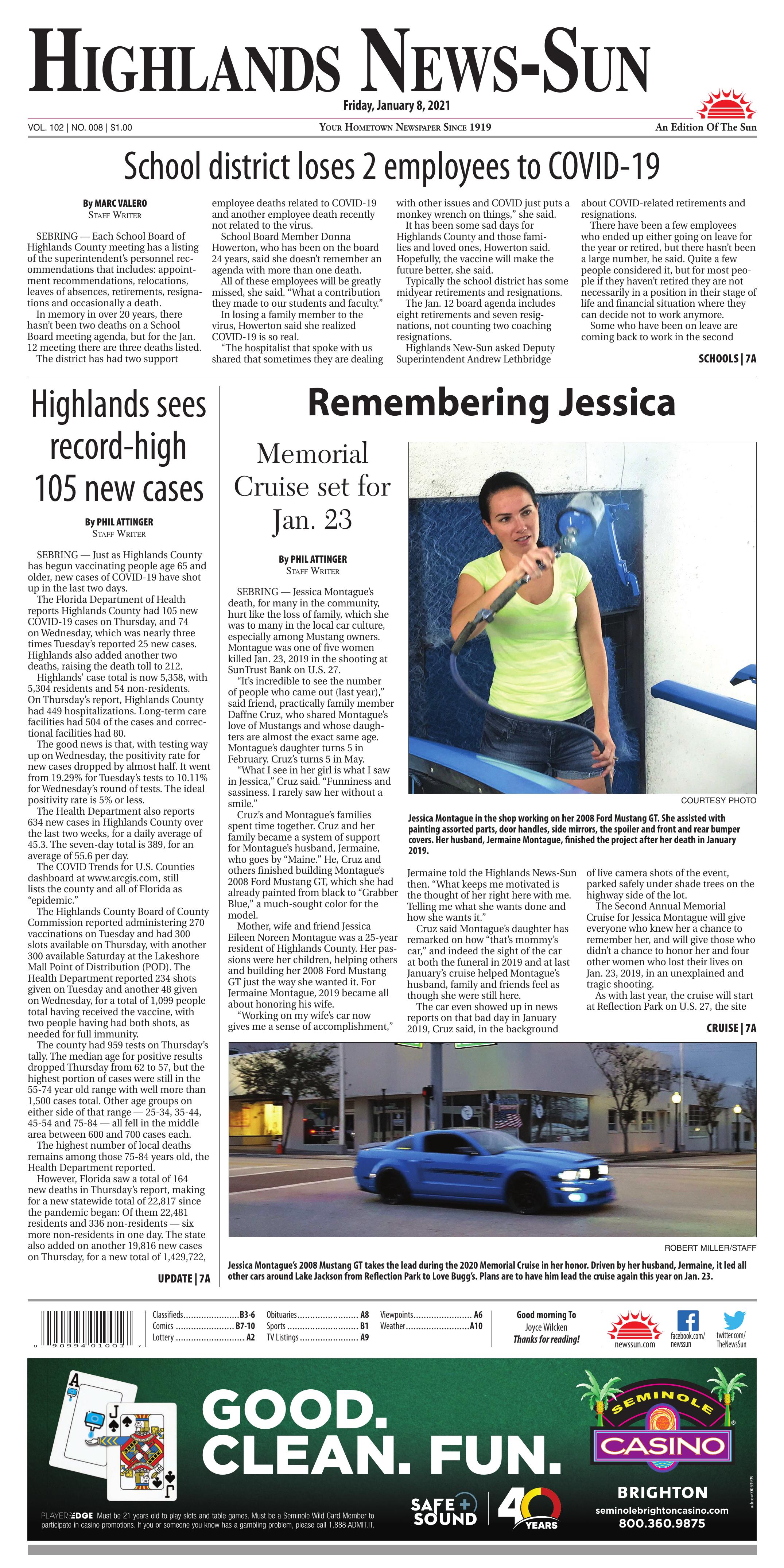 SEBRING — Each School Board of Highlands County meeting has a listing of the superintendent’s personnel recommendations that includes: appointment recommendations, relocations, leaves of absences, retirements, resignations and occasionally a death.

In memory in over 20 years, there hasn’t been two deaths on a School Board meeting agenda, but for the Jan. 12 meeting there are three deaths listed.

School Board Member Donna Howerton, who has been on the board 24 years, said she doesn’t remember an agenda with more than one death.

All of these employees will be greatly missed, she said. “What a contribution they made to our students and faculty.”

In losing a family member to the virus, Howerton said she realized COVID-19 is so real.

“The hospitalist that spoke with us shared that sometimes they are dealing with other issues and COVID just puts a monkey wrench on things,” she said.

It has been some sad days for Highlands County and those families and loved ones, Howerton said. Hopefully, the vaccine will make the future better, she said.

Typically the school district has some midyear retirements and resignations.

There have been a few employees who ended up either going on leave for the year or retired, but there hasn’t been a large number, he said. Quite a few people considered it, but for most people if they haven’t retired they are not necessarily in a position in their stage of life and financial situation where they can decide not to work anymore.

Some who have been on leave are coming back to work in the second semester, but others are still out for medical reasons and want to be out for the whole year, Lethbridge noted.

The retirements were higher in the transportation department that included more veterans. Based on age they didn’t want to take unnecessary risks for themselves, Lethbridge explained.

He said the district was impacted, but it wasn’t an overwhelming number when considering the entire school system.

Jessica Montague’s 2008 Mustang GT takes the lead during the 2020 Memorial Cruise in her honor. Driven by her husband, Jermaine, it led all other cars around Lake Jackson from Reflection Park to Love Bugg’s. Plans are to have him lead the cruise again this year on Jan. 23.

Jessica Montague in the shop working on her 2008 Ford Mustang GT. She assisted with painting assorted parts, door handles, side mirrors, the spoiler and front and rear bumper covers. Her husband, Jermaine Montague, finished the project after her death in January 2019.

SEBRING — Jessica Montague’s death, for many in the community, hurt like the loss of family, which she was to many in the local car culture, especially among Mustang owners. Montague was one of five women killed Jan. 23, 2019 in the shooting at SunTrust Bank on U.S. 27.

“It’s incredible to see the number of people who came out (last year),” said friend, practically family member Daffne Cruz, who shared Montague’s love of Mustangs and whose daughters are almost the exact same age. Montague’s daughter turns 5 in February. Cruz’s turns 5 in May.

“What I see in her girl is what I saw in Jessica,” Cruz said. “Funniness and sassiness. I rarely saw her without a smile.”

Cruz’s and Montague’s families spent time together. Cruz and her family became a system of support for Montague’s husband, Jermaine, who goes by “Maine.” He, Cruz and others finished building Montague’s 2008 Ford Mustang GT, which she had already painted from black to “Grabber Blue,” a much-sought color for the model.

Mother, wife and friend Jessica Eileen Noreen Montague was a 25-year resident of Highlands County. Her passions were her children, helping others and building her 2008 Ford Mustang GT just the way she wanted it. For Jermaine Montague, 2019 became all about honoring his wife.

“Working on my wife’s car now gives me a sense of accomplishment,” Jermaine told the Highlands News-Sun then. “What keeps me motivated is the thought of her right here with me. Telling me what she wants done and how she wants it.”

Cruz said Montague’s daughter has remarked on how “that’s mommy’s car,” and indeed the sight of the car at both the funeral in 2019 and at last January’s cruise helped Montague’s husband, family and friends feel as though she were still here.

The car even showed up in news reports on that bad day in January 2019, Cruz said, in the background of live camera shots of the event, parked safely under shade trees on the highway side of the lot.

The Second Annual Memorial Cruise for Jessica Montague will give everyone who knew her a chance to remember her, and will give those who didn’t a chance to honor her and four other women who lost their lives on Jan. 23, 2019, in an unexplained and tragic shooting.

As with last year, the cruise will start at Reflection Park on U.S. 27, the site of the former SunTrust bank where the shooting occurred and now dedicated as a memorial to Montague, Debra Cook, Marisol Lopez, Ana Piñon-Williams and Cynthia Watson.

People are asked to start gathering at 5:30 p.m. on Jan. 23 and be ready to drive out by 6 p.m., down U.S. 27 to Lakeview Drive, through downtown Sebring, and then out on Sebring Parkway to Panther Parkway, Manatee Drive, Valerie Boulevard and U.S. 27 to gather again at Love Bugg’s, like last year.

Cruz said she’s made sure folks at Love Bugg’s know about the plan to arrive there this time. Last time they didn’t, and although the parking lot accommodated the 30-plus cars of the cruise, it surprised the store staff a bit. This year the event page shows 28 going, but another 74 interested, who could easily show up that day.

Not that it worries Cruz too much, given the drivers’ experience with cruise events and car shows.

“You get crafty on how to park and stage cars,” Cruz said.

She said she wants to talk with staff at the Residence Inn by Marriott, across Tubbs Road from Reflection Park. It became a law enforcement and emergency vehicle staging area in 2019 and could end up taking some overflow if enough people join the cruise.

Mostly, this is about sharing stories and supporting those families who lost their loved ones.

Cruz said it hurts her heart that Jermaine has gone through this. Jessica died on her husband’s birthday. Cruz said she makes a point to give him a gift on the day before or after, but never that day.

She wants people to know that it’s easy to get caught up in the sadness of the tragedy.

“We’ve tried to turn it into something positive,” Cruz said, “doing something she would have loved to have done.”

She also encourages people to continue to check on and support those who lost loved ones. A year or two later, most people have forgotten the event, but families still live with the loss.

Seeing people come out last year, not just for Montague, but for all five women, and ride out together through town was, as Cruz said, “beautifully tragic.”

To go, find the event on Facebook and sign up. It’s being sponsored by Strictly Royal Racing, the shop where both Montague and Cruz have worked on their cars. Gather at 5:30 p.m. Saturday, Jan. 23, at 1901 U.S. 27 South in Sebring.

SEBRING — Just as Highlands County has begun vaccinating people age 65 and older, new cases of COVID-19 have shot up in the last two days.

Highlands’ case total is now 5,358, with 5,304 residents and 54 non-residents. On Thursday’s report, Highlands County had 449 hospitalizations. Long-term care facilities had 504 of the cases and correctional facilities had 80.

The good news is that, with testing way up on Wednesday, the positivity rate for new cases dropped by almost half. It went from 19.29% for Tuesday’s tests to 10.11% for Wednesday’s round of tests. The ideal positivity rate is 5% or less.

The Health Department also reports 634 new cases in Highlands County over the last two weeks, for a daily average of 45.3. The seven-day total is 389, for an average of 55.6 per day.

The COVID Trends for U.S. Counties dashboard at www.arcgis.com, still lists the county and all of Florida as “epidemic.”

The Highlands County Board of County Commission reported administering 270 vaccinations on Tuesday and had 300 slots available on Thursday, with another 300 available Saturday at the Lakeshore Mall Point of Distribution (POD). The Health Department reported 234 shots given on Tuesday and another 48 given on Wednesday, for a total of 1,099 people total having received the vaccine, with two people having had both shots, as needed for full immunity.

The highest number of local deaths remains among those 75-84 years old, the Health Department reported.

The state’s positivity rate for new cases was almost the same as the county’s: 11.6%, which was down a bit from Wednesday’s measurement of 12.6%. Florida processed more than 168,000 tests for the day.

Nationally, the United States saw 247,051 new cases, according to data from The COVID Tracking Project [covidtracking.com/data] from Wednesday night, which was 32,673 more than Wednesday’s 214,378 new cases, and brought the seven-day average to 218,749.4 new cases per day.

According to the Johns Hopkins University of Medicine Coronavirus Resource Center at coronavirus.jhu.edu, the U.S. has now had 21.47 million COVID-19 cases and 363,519 deaths attributed to the disease.