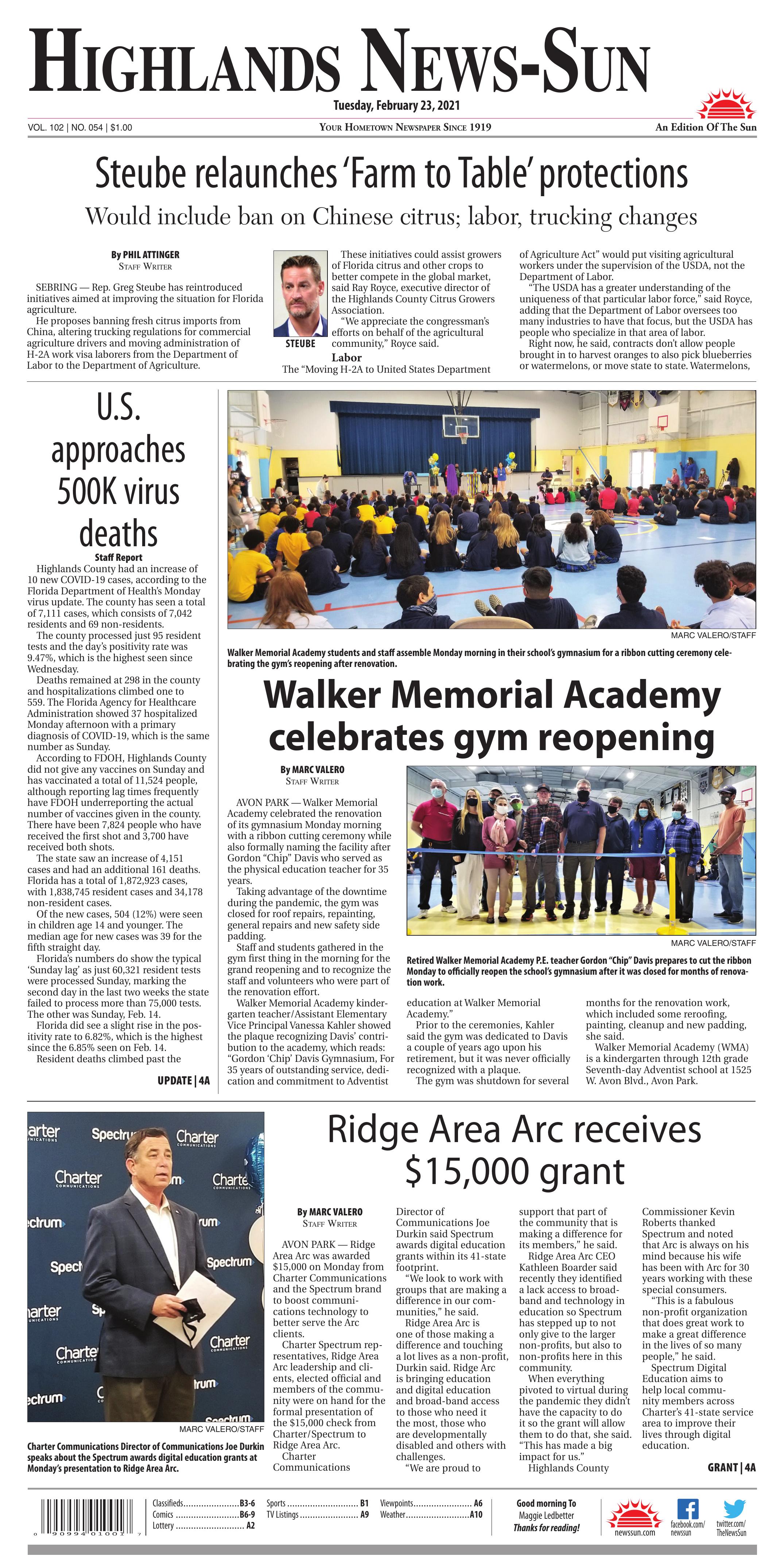 He proposes banning fresh citrus imports from China, altering trucking regulations for commercial agriculture drivers and moving administration of H-2A work visa laborers from the Department of Labor to the Department of Agriculture.

These initiatives could assist growers of Florida citrus and other crops to better compete in the global market, said Ray Royce, executive director of the Highlands County Citrus Growers Association.

“We appreciate the congressman’s efforts on behalf of the agricultural community,” Royce said.

LaborThe “Moving H-2A to United States Department of Agriculture Act” would put visiting agricultural workers under the supervision of the USDA, not the Department of Labor.

“The USDA has a greater understanding of the uniqueness of that particular labor force,” said Royce, adding that the Department of Labor oversees too many industries to have that focus, but the USDA has people who specialize in that area of labor.

Right now, he said, contracts don’t allow people brought in to harvest oranges to also pick blueberries or watermelons, or move state to state. Watermelons, for example, get harvested in Immokalee in April, in Georgia in June and Michigan later in the year. Royce said “it’s silly” to send people back and then bring them back again to have them cross state lines.

It would also protect Florida growers, with their labor and safety costs, from cheaper imported fruit. Mexican blueberries have posed a similar problem for Florida growers, Royce said under the United States–Mexico–Canada Agreement (USMCA) and the North American Free-Trade Agreement (NAFTA) allowances.

“Florida fruits and vegetables have suffered from that,” Royce said.

TuckingThe “FRESH Trucking Act,” originally introduced by Steube in January 2020, would amend the Federal Motor Carrier Safety Administration’s “Hours of Service Regulations” governing how long truckers may be on the road and how long they must sleep.

Regulations cap driving time at 11 hours a day, with a half hour of rest and a full stop after a 14-hour day, no matter how much downtime they’ve had. The regulations exist to prevent fatal crashes from sleepy or exhausted long-haul truckers.

Most citrus truckers don’t drive out of state, Royce said, but they may run several loads per day during harvest season when the product is perishable and the harvest may soon end.

Steube’s bill would change hours and breaks for agricultural truckers, letting them complete a trip if they are within 150 miles of their destination, even if they are over the maximum on-duty drive time. Also, loading and unloading would no longer count against their on-duty time.

The bill, sent to the U.S. House Transportation and Infrastructure Committee last year, got no cosponsors

“It will be interesting to see if he gets cosigners [now] and will it be able to move through the Democratic-controlled committees,” Royce said, “Having legislation introduced and having it passed are two different things. To his credit, he is responding to the concerns of his constituents and we appreciate his willingness to work on our behalf.”

Retired Walker Memorial Academy P.E. teacher Gordon “Chip” Davis prepares to cut the ribbon Monday to officially reopen the school’s gymnasium after it was closed for months of renovation work.

AVON PARK — Walker Memorial Academy celebrated the renovation of its gymnasium Monday morning with a ribbon cutting ceremony while also formally naming the facility after Gordon “Chip” Davis who served as the physical education teacher for 35 years.

Taking advantage of the downtime during the pandemic, the gym was closed for roof repairs, repainting, general repairs and new safety side padding.

Staff and students gathered in the gym first thing in the morning for the grand reopening and to recognize the staff and volunteers who were part of the renovation effort.

Prior to the ceremonies, Kahler said the gym was dedicated to Davis a couple of years ago upon his retirement, but it was never officially recognized with a plaque.

The gym was shutdown for several months for the renovation work, which included some reroofing, painting, cleanup and new padding, she said.

AVON PARK — Ridge Area Arc was awarded $15,000 on Monday from Charter Communications and the Spectrum brand to boost communications technology to better serve the Arc clients.

Charter Spectrum representatives, Ridge Area Arc leadership and clients, elected official and members of the community were on hand for the formal presentation of the $15,000 check from Charter/Spectrum to Ridge Area Arc.

“We look to work with groups that are making a difference in our communities,” he said.

Ridge Area Arc is one of those making a difference and touching a lot lives as a non-profit, Durkin said. Ridge Arc is bringing education and digital education and broad-band access to those who need it the most, those who are developmentally disabled and others with challenges.

“We are proud to support that part of the community that is making a difference for its members,” he said.

Ridge Area Arc CEO Kathleen Boarder said recently they identified a lack access to broadband and technology in education so Spectrum has stepped up to not only give to the larger non-profits, but also to non-profits here in this community.

When everything pivoted to virtual during the pandemic they didn’t have the capacity to do it so the grant will allow them to do that, she said. “This has made a big impact for us.”

Highlands County Commissioner Kevin Roberts thanked Spectrum and noted that Arc is always on his mind because his wife has been with Arc for 30 years working with these special consumers.

“This is a fabulous non-profit organization that does great work to make a great difference in the lives of so many people,” he said.

Since launching the program in 2017, Charter has committed to awarding $6 million in cash grants and in-kind commitments, including PSAs and technical assistance, to support broadband education, training and technology.

Spectrum Digital Education has benefitted more than 56,000 individuals in 17 states and Washington, DC.

Highlands County had an increase of 10 new COVID-19 cases, according to the Florida Department of Health’s Monday virus update. The county has seen a total of 7,111 cases, which consists of 7,042 residents and 69 non-residents.

The county processed just 95 resident tests and the day’s positivity rate was 9.47%, which is the highest seen since Wednesday.

Deaths remained at 298 in the county and hospitalizations climbed one to 559. The Florida Agency for Healthcare Administration showed 37 hospitalized Monday afternoon with a primary diagnosis of COVID-19, which is the same number as Sunday.

According to FDOH, Highlands County did not give any vaccines on Sunday and has vaccinated a total of 11,524 people, although reporting lag times frequently have FDOH underreporting the actual number of vaccines given in the county. There have been 7,824 people who have received the first shot and 3,700 have received both shots.

Florida’s numbers do show the typical ‘Sunday lag’ as just 60,321 resident tests were processed Sunday, marking the second day in the last two weeks the state failed to process more than 75,000 tests. The other was Sunday, Feb. 14.

FDOH reports show just 3,048 vaccines administered in the state on Sunday, which is by far the lowest number in the past two weeks. Vaccine distribution problems caused by storms throughout the country delayed most shipments.

COVID numbers continue to look better across the nation, as the United States bears down on 500,000 deaths. The number of new cases continues to drop, as the COVID Tracking Project’s Sunday night report showed a total of 58,429 new cases. The seven-day rolling average of 64,301 is the lowest seen since Oct. 23.

Hospitalizations have dropped for 40 straight days and there are 56,159 currently hospitalized, while deaths also dropped for the day, with 1,286 reported.

Testing is at its lowest rate since October, while the country’s positivity rate has trickled down to 6.06%.

According to the Johns Hopkins University Center for Systems Science and Engineering, the United States has seen 28.17 million cases and had 499,779 virus deaths.

Globally, there have been 111.7 million cases and 2.47 million deaths.