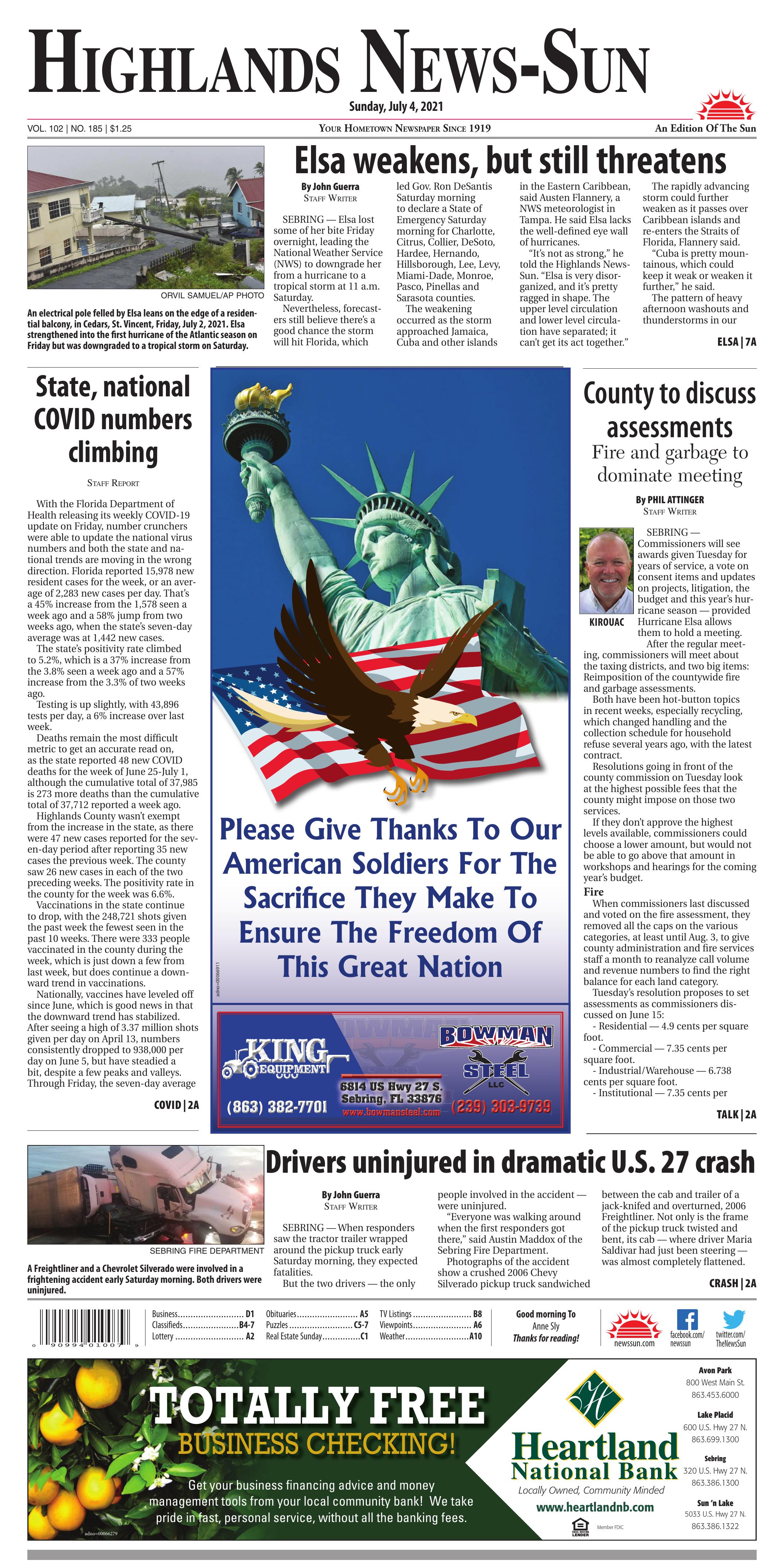 An electrical pole felled by Elsa leans on the edge of a residential balcony, in Cedars, St. Vincent, Friday, July 2, 2021. Elsa strengthened into the first hurricane of the Atlantic season on Friday but was downgraded to a tropical storm on Saturday.

SEBRING — Elsa lost some of her bite Friday overnight, leading the National Weather Service (NWS) to downgrade her from a hurricane to a tropical storm at 11 a.m. Saturday.

The weakening occurred as the storm approached Jamaica, Cuba and other islands in the Eastern Caribbean, said Austen Flannery, a NWS meteorologist in Tampa. He said Elsa lacks the well-defined eye wall of hurricanes.

The rapidly advancing storm could further weaken as it passes over Caribbean islands and re-enters the Straits of Florida, Flannery said.

“Cuba is pretty mountainous, which could keep it weak or weaken it further,” he said.

The pattern of heavy afternoon washouts and thunderstorms in our area will continue on Independence Day and Monday, Flannery said, “until the area could begin to feel the effects of the storm later in the week. NWS tracking maps on Saturday put the storm’s eye offshore of Naples around 2 p.m. Tuesday.

The U.S. Air Force’s 53rd Weather Reconnaissance Squadron aka, “Hurricane Hunters” as well as National Oceanographic and Atmospheric Administration aircraft will continuously fly into the system as it nears the Florida coasts, Flannery said.

He said there were no other areas of concern in the Caribbean Saturday afternoon.

Florida residents — veterans of many hurricanes — probably already have their hurricane supplies organized and at the ready, but if not, it’s time to do so, Flannery said.

“If this one doesn’t pan out, another one probably will. This is just the middle of hurricane season, and Elsa may not be the last one this season.”

A Freightliner and a Chevrolet Silverado were involved in a frightening accident early Saturday morning. Both drivers were uninjured.

But the two drivers — the only people involved in the accident — were uninjured.

“Everyone was walking around when the first responders got there,” said Austin Maddox of the Sebring Fire Department.

Photographs of the accident show a crushed 2006 Chevy Silverado pickup truck sandwiched between the cab and trailer of a jack-knifed and overturned, 2006 Freightliner. Not only is the frame of the pickup truck twisted and bent, its cab — where driver Maria Saldivar had just been steering — was almost completely flattened.

In a situation that Sebring Police Sgt. Vivian Buck called “amazing,” the driver of the Freightliner, Javionne Floyd, also walked away with no apparent injuries. “They were able to extricate themselves by the time responders got there,” she said.

Ms. Saldivar, of Sebring, was driving east on Schumacher Road at the intersection with U.S. 27 South. Schumacher becomes Sebring Parkway on the other side of U.S. 27.

As she crossed into the intersection, Floyd, driving his Freightliner south on the divided highway, slammed into the side of her pickup.

Buck told the Highlands News-Sun that Floyd, who lives in Avon Park, ran the south-bound red light in front of him and is considered at fault in the crash.

“He steered left to avoid the pickup truck and slammed on his brakes, but he made contact,” Buck said. The two vehicles, locked together, slid into the medium.

The Highlands County Sheriff’s Office then issued an alert that both sides of U.S. 27 were blocked as traffic investigators worked the scene and removed the vehicles.

There was no need, however, for an ambulance, Maddox said.

“Everyone was good to go,” he said. “No one was transported to the hospital.”

The highway reopened about four hours later, when the Sheriff’s Office sent an alert that the roads were free at 10:19 a.m.

With the Florida Department of Health releasing its weekly COVID-19 update on Friday, number crunchers were able to update the national virus numbers and both the state and national trends are moving in the wrong direction. Florida reported 15,978 new resident cases for the week, or an average of 2,283 new cases per day. That’s a 45% increase from the 1,578 seen a week ago and a 58% jump from two weeks ago, when the state’s seven-day average was at 1,442 new cases.

Highlands County wasn’t exempt from the increase in the state, as there were 47 new cases reported for the seven-day period after reporting 35 new cases the previous week. The county saw 26 new cases in each of the two preceding weeks. The positivity rate in the county for the week was 6.6%.

Vaccinations in the state continue to drop, with the 248,721 shots given the past week the fewest seen in the past 10 weeks. There were 333 people vaccinated in the county during the week, which is just down a few from last week, but does continue a downward trend in vaccinations.

Nationally, vaccines have leveled off since June, which is good news in that the downward trend has stabilized. After seeing a high of 3.37 million shots given per day on April 13, numbers consistently dropped to 938,000 per day on June 5, but have steadied a bit, despite a few peaks and valleys. Through Friday, the seven-day average is 1.09 million new vaccines given per day. At the current rate of 1.09 million vaccines given per day it will take an additional five months for the U.S. to reach the goal of vaccinating 75% of the population.

The country did see a 7% increase in testing compared to a week ago.

According to the Johns Hopkins Center for Systems Science and Engineering, there have been 183.2 million cases globally and the death toll is marching towards the 4 million mark, with 3,966,264 reported deaths. The U.S. leads the world in deaths, with Brazil (521,952) and India (401,050) also with high numbers. The same three countries have also seen the most cases.

Globally, there have been roughly 3.14 billion shots given, which is enough to fully vaccinate 20.4% of the world’s population. The seven-day average for vaccines given is 40.8 million per day.

Commissioners to talk about fire and garbage

SEBRING — Commissioners will see awards given Tuesday for years of service, a vote on consent items and updates on projects, litigation, the budget and this year’s hurricane season — provided Hurricane Elsa allows them to hold a meeting.

After the regular meeting, commissioners will meet about the taxing districts, and two big items: Reimposition of the countywide fire and garbage assessments.

Both have been hot-button topics in recent weeks, especially recycling, which changed handling and the collection schedule for household refuse several years ago, with the latest contract.

Resolutions going in front of the county commission on Tuesday look at the highest possible fees that the county might impose on those two services.

If they don’t approve the highest levels available, commissioners could choose a lower amount, but would not be able to go above that amount in workshops and hearings for the coming year’s budget.

FireWhen commissioners last discussed and voted on the fire assessment, they removed all the caps on the various categories, at least until Aug. 3, to give county administration and fire services staff a month to reanalyze call volume and revenue numbers to find the right balance for each land category.

Commissioners have already approved a 7% increase for all categories for the next five years, along with removing all caps, including the top range assessments, for now. They did discuss cutting the fee for institutional buildings in half, from 23 cents per square foot to 12 cents, after hearing from pastors at the most recent workshop.

GarbageThe maximum rate possible is $240 per year per household, which is what commissioners have on their resolution for the solid waste assessment, to collect garbage and recycling.

Commission Chair Scott Kirouac told the Highlands News-Sun after a recent meeting at Sun ‘N Lake Special Improvement District that the Texas office had not learned of the problems Highlands County has had with the service. Problems have included contaminated recycling loads to the extent that county officials have waived tipping fees on such spoiled loads at the Highlands County Landfill.

Kirouac said contaminated residential loads have come from spotty compliance with what can and what can not go into recycling bins. Even if a resident on one street gets it right, a resident on the next street might not and it spoils the load for the entire route.

With any hike in the assessment, commissioners have said they want the hauler to significantly improve its service.