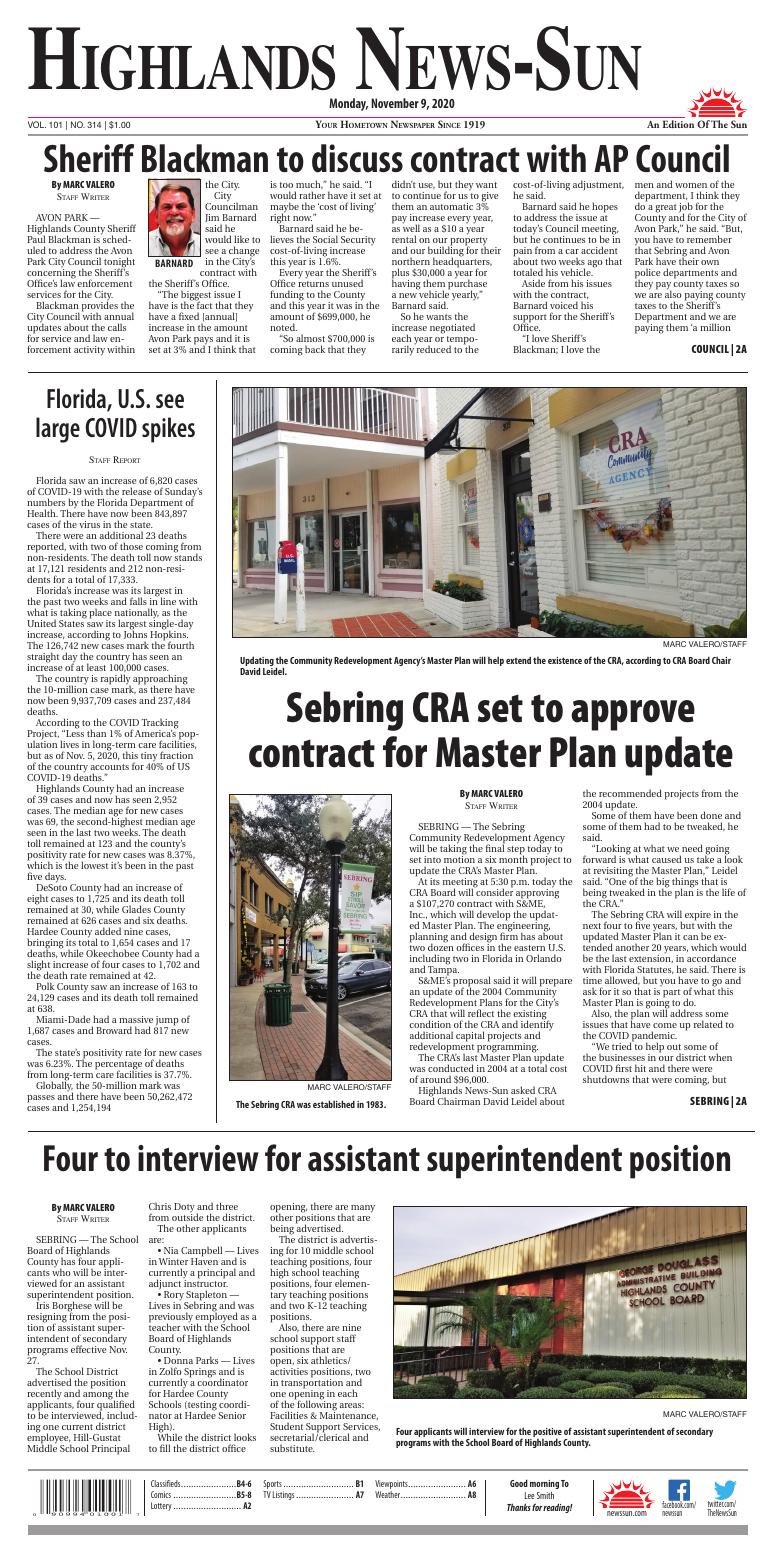 Blackman provides the City Council with annual updates about the calls for service and law enforcement activity within the City.

City Councilman Jim Barnard said he would like to see a change in the City’s contract with the Sheriff’s Office.

“The biggest issue I have is the fact that they have a fixed [annual] increase in the amount Avon Park pays and it is set at 3% and I think that is too much,” he said. “I would rather have it set at maybe the ‘cost of living’ right now.”

Barnard said he believes the Social Security cost-of-living increase this year is 1.6%.

Every year the Sheriff’s Office returns unused funding to the County and this year it was in the amount of $699,000, he noted.

“So almost $700,000 is coming back that they didn’t use, but they want to continue for us to give them an automatic 3% pay increase every year, as well as a $10 a year rental on our property and our building for their northern headquarters, plus $30,000 a year for having them purchase a new vehicle yearly,” Barnard said.

So he wants the increase negotiated each year or temporarily reduced to the cost-of-living adjustment, he said.

Barnard said he hopes to address the issue at today’s Council meeting, but he continues to be in pain from a car accident about two weeks ago that totaled his vehicle.

Aside from his issues with the contract, Barnard voiced his support for the Sheriff’s Office.

“I love Sheriff’s Blackman; I love the men and women of the department, I think they do a great job for the County and for the City of Avon Park,” he said. “But, you have to remember that Sebring and Avon Park have their own police departments and they pay county taxes so we are also paying county taxes to the Sheriff’s Department and we are paying them ‘a million and a half plus dollars’, every year too.

“I do think they deserve what they deserve, but I think that an automatic increase every year is something we need to get away from.”

In a cost saving effort, the City of Avon Park disbanded its police department and approved an agreement with the Sheriff’s Office for law enforcement services within the city limits that started in October 2012.

Many of the former Avon Park Police officers were hired by the Sheriff’s Office at the time of the transition.

Updating the Community Redevelopment Agency’s Master Plan will help extend the existence of the CRA, according to CRA Board Chair David Leidel.

The Sebring CRA was established in 1983.

The Sebring CRA Board will vote today on approving a contract with an engineering/planning/design firm to update the CRA’s Master Plan.

SEBRING — The Sebring Community Redevelopment Agency will be taking the final step today to set into motion a six month project to update the CRA’s Master Plan.

At its meeting at 5:30 p.m. today the CRA Board will consider approving a $107,270 contract with S&ME, Inc., which will develop the updated Master Plan. The engineering, planning and design firm has about two dozen offices in the eastern U.S. including two in Florida in Orlando and Tampa.

S&ME’s proposal said it will prepare an update of the 2004 Community Redevelopment Plans for the City’s CRA that will reflect the existing condition of the CRA and identify additional capital projects and redevelopment programming.

Highlands News-Sun asked CRA Board Chairman David Leidel about the recommended projects from the 2004 update.

“Looking at what we need going forward is what caused us take a look at revisiting the Master Plan,” Leidel said. “One of the big things that is being tweaked in the plan is the life of the CRA.”

The Sebring CRA will expire in the next four to five years, but with the updated Master Plan it can be extended another 20 years, which would be the last extension, in accordance with Florida Statutes, he said. There is time allowed, but you have to go and ask for it so that is part of what this Master Plan is going to do.

Also, the plan will address some issues that have come up related to the COVID pandemic.

“We tried to help out some of the businesses in our district when COVID first hit and there were shutdowns that were coming, but there was nothing in our plan that would allow for any kind of rent subsidies or business grants or anything like that because nobody, of course, would have thought of a pandemic hitting and shutting down the economy, Leidel said.

Leidel said the planning firm offered those additional options, but it is not something the CRA is seeking.

The process to expand CRA district is a lot more stringent than updating the plan or asking for more time for the district, he said.

“We have a fairly large district and it really incorporates the necessary portion of our City,” Leidel said.

Also, the CRA board will likely not approve the 3-D imaging option for the plan, he said.

“We are going to be very cautious with how we spend those dollars,” Leidel said. “Spending too much money on the Master Plan that takes away the ability to implement that Master Plan.”

The Sebring CRA was created in 1983 by the City of Sebring City Council to aid in eliminating blight in the City and guide the City in its redevelopment efforts.

The Sebring CRA encompasses 650 acres including the Historic District in the heart of Downtown Sebring.

The purpose of the CRA is to revitalize the physical environment and the economy of the Community Redevelopment Area.

The CRA’s activities are designed to solve the underlying problems of slum and blighted conditions through planning, redevelopment, historic preservation, economic development and affordable housing so that the tax base can be protected and enhanced by these mutually supportive activities.

Four applicants will interview for the positive of assistant superintendent of secondary programs with the School Board of Highlands County.

SEBRING — The School Board of Highlands County has four applicants who will be interviewed for an assistant superintendent position.

Iris Borghese will be resigning from the position of assistant superintendent of secondary programs effective Nov. 27.

The School District advertised the position recently and among the applicants, four qualified to be interviewed, including one current district employee, Hill-Gustat Middle School Principal Chris Doty and three from outside the district.

The other applicants are:

• Nia Campbell — Lives in Winter Haven and is currently a principal and adjunct instructor.

• Rory Stapleton — Lives in Sebring and was previously employed as a teacher with the School Board of Highlands County.

While the district looks to fill the district office opening, there are many other positions that are being advertised.

Also, there are nine school support staff positions that are open, six athletics/activities positions, two in transportation and one opening in each of the following areas: Facilities & Maintenance, Student Support Services, secretarial/clerical and substitute.

Florida saw an increase of 6,820 cases of COVID-19 with the release of Sunday’s numbers by the Florida Department of Health. There have now been 843,897 cases of the virus in the state.

There were an additional 23 deaths reported, with two of those coming from non-residents. The death toll now stands at 17,121 residents and 212 non-residents for a total of 17,333.

Florida’s increase was its largest in the past two weeks and falls in line with what is taking place nationally, as the United States saw its largest single-day increase, according to Johns Hopkins. The 126,742 new cases mark the fourth straight day the country has seen an increase of at least 100,000 cases.

According to the COVID Tracking Project, “Less than 1% of America’s population lives in long-term care facilities, but as of Nov. 5, 2020, this tiny fraction of the country accounts for 40% of US COVID-19 deaths.”

The state’s positivity rate for new cases was 6.23%. The percentage of deaths from long-term care facilities is 37.7%. 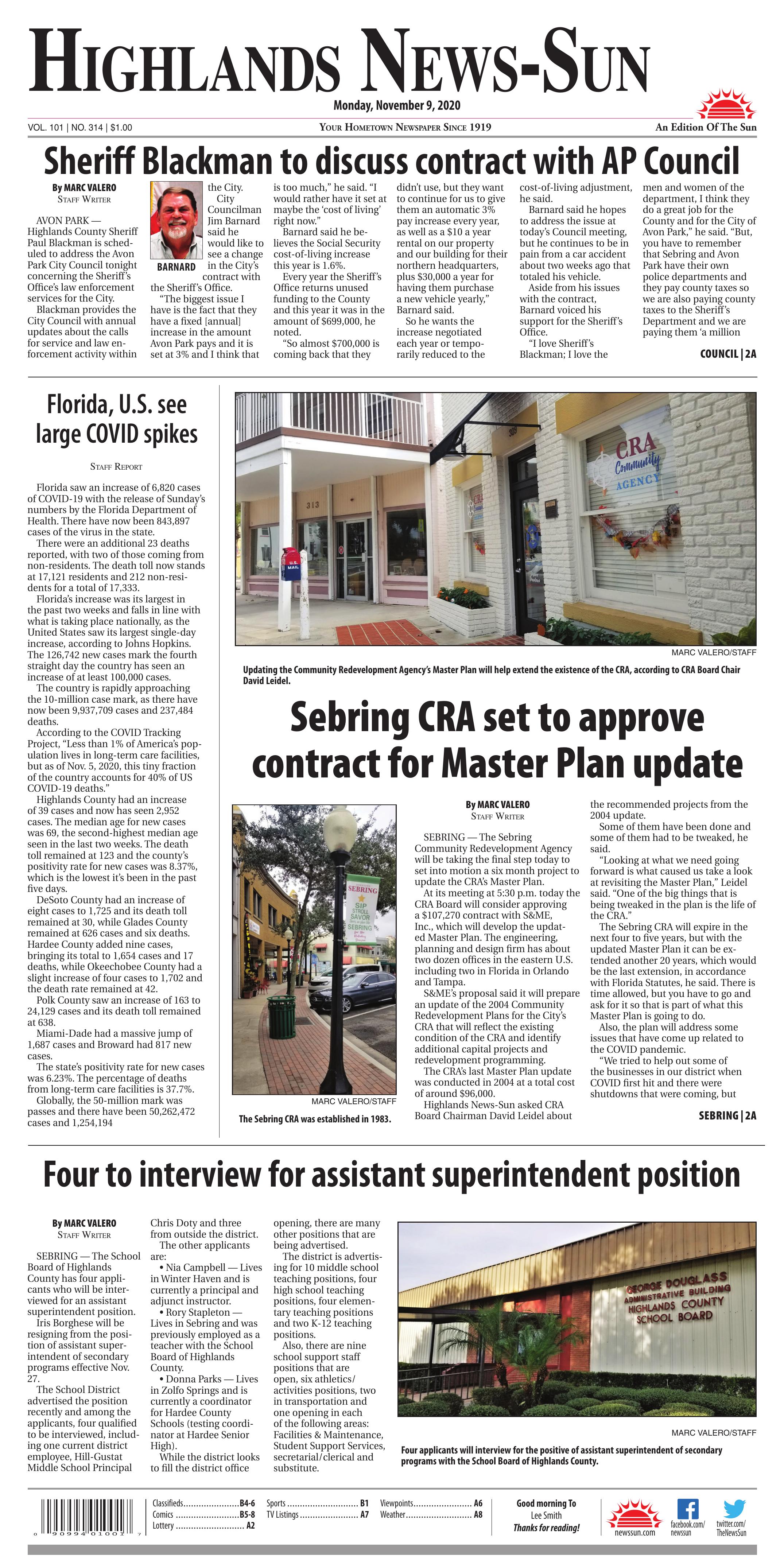