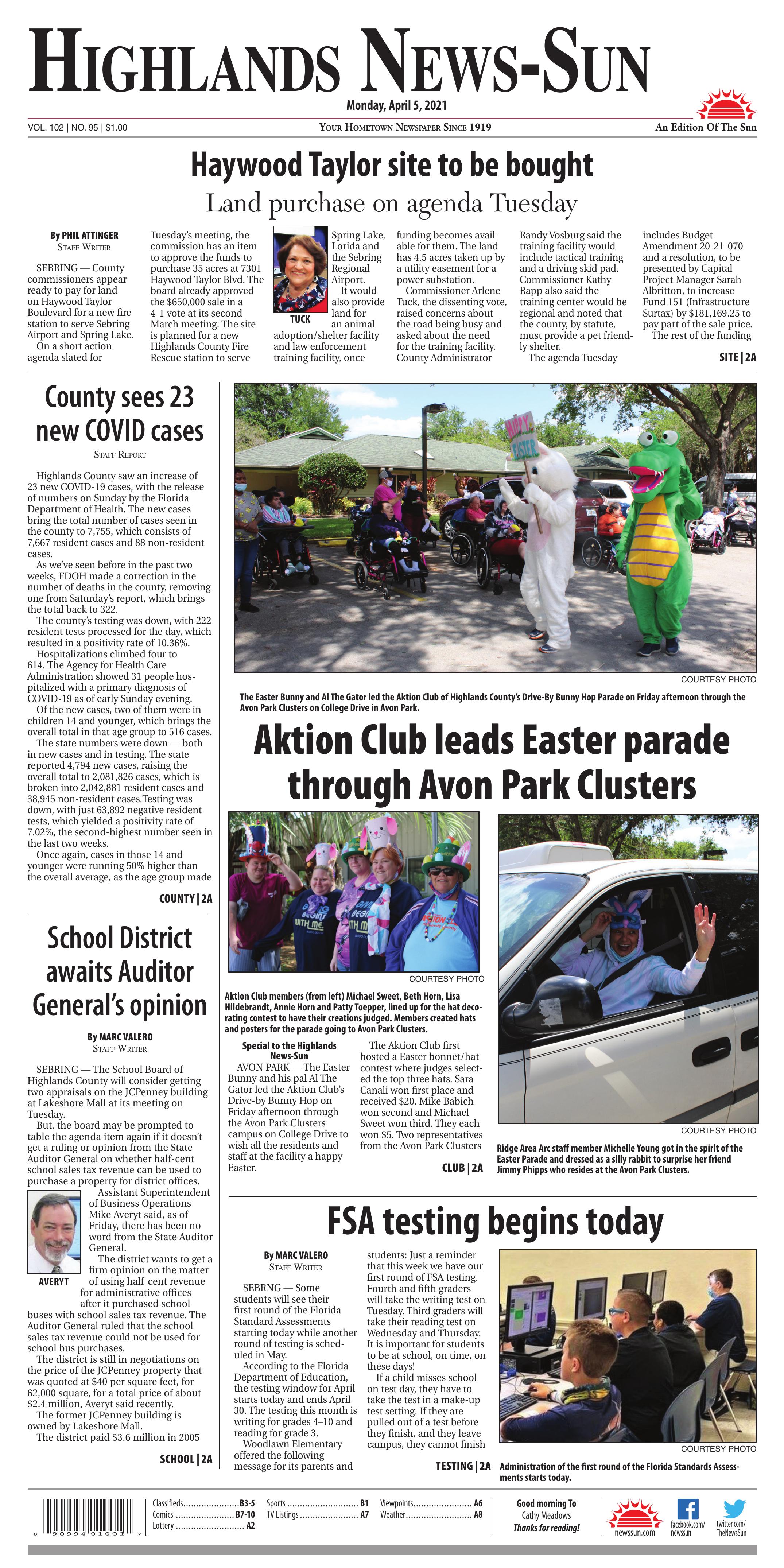 On a short action agenda slated for Tuesday’s meeting, the commission has an item to approve the funds to purchase 35 acres at 7301 Haywood Taylor Blvd. The board already approved the $650,000 sale in a 4-1 vote at its second March meeting. The site is planned for a new Highlands County Fire Rescue station to serve Spring Lake, Lorida and the Sebring Regional Airport.

It would also provide land for an animal adoption/shelter facility and law enforcement training facility, once funding becomes available for them. The land has 4.5 acres taken up by a utility easement for a power substation.

The agenda Tuesday includes Budget Amendment 20-21-070 and a resolution, to be presented by Capital Project Manager Sarah Albritton, to increase Fund 151 (Infrastructure Surtax) by $181,169.25 to pay part of the sale price.

The rest of the funding will come from the Fund Balance — money brought forth from the previous fiscal year. According to a financial presentation provided by the Office of Management and Budget, there was $4.4 million carried over from fiscal year 2019-20 and the county has $12.1 million unassigned in the 2020-21 fiscal year budget, leaving $16.5 million in total fund balance.

The proposed fire station is part of an expansion and improvement program instituted by the county to increase fire coverage throughout the county through a combination of full-time staff at some fire stations and volunteer firefighters at others.

In related matters, the county commission has several Fire and Emergency Medical Services-related items in Tuesday’s consent agenda, the portion of the county business that is considered non-controversial, to be handled en masse with a single vote.

- An amended renewal agreement between the Board and the Highlands County Sheriff’s Office to have the SWAT Tactical Medical Support Team, a medical unit consisting of cross-trained medical personnel from Highlands County Fire Rescue who will accompany SWAT Team members into “hot zones” at incidents to provide medical care within the zone.

- Payment of $45,186 to Public Consulting Group LLC for services provided to Highlands County by getting the county EMS enrolled in the Florida EMS Public Emergency Medical Transports Program, and consulting services, which will continue through the end of fiscal year 2021-22.

- Budget Amendment 20-21-065 and a resolution to provide $41,300 to fund the Length of Service Award Program (LOSAP) to recognize long-standing volunteer firefighters.

The Easter Bunny and Al The Gator led the Aktion Club of Highlands County’s Drive-By Bunny Hop Parade on Friday afternoon through the Avon Park Clusters on College Drive in Avon Park.

Ridge Area Arc staff member Michelle Young got in the spirit of the Easter Parade and dressed as a silly rabbit to surprise her friend Jimmy Phipps who resides at the Avon Park Clusters.

AVON PARK — The Easter Bunny and his pal Al The Gator led the Aktion Club’s Drive-by Bunny Hop on Friday afternoon through the Avon Park Clusters campus on College Drive to wish all the residents and staff at the facility a happy Easter.

After the judging on the Ridge Rea Arc campus, Aktion Club members loaded up in their vehicles decorated with “Happy Easter” posters and drove to the Clusters. Aktion Club member Alex Lopez played the Easter Bunny and Aktion Club Treasurer Jack Garnett was the Gator. They led the parade of vehicles through the Clusters housing complex to wave and honk at more than 50 people outside waiting for their arrival.

“It was great to see them smile,” Garnett said. “I was glad to be a part of this.”

Residents at the Clusters, which is an assisted living facility for people with disabilities, were presented beads, stuffed animals and a basket of Easter eggs filled with candy to hunt after the parade. Staff were presented chocolates for all their hard work and dedication. They posed with pictures with the bunny and gator.

As the Aktion Club members departed, they too received chocolate rabbits for Easter. Aktion Club, a civic club sponsored by the Kiwanis, consists of 60 adults with disabilities who help their community.

Administration of the first round of the Florida Standards Assessments starts today.

SEBRNG — Some students will see their first round of the Florida Standard Assessments starting today while another round of testing is scheduled in May.

According to the Florida Department of Education, the testing window for April starts today and ends April 30. The testing this month is writing for grades 4–10 and reading for grade 3.

Woodlawn Elementary offered the following message for its parents and students: Just a reminder that this week we have our first round of FSA testing. Fourth and fifth graders will take the writing test on Tuesday. Third graders will take their reading test on Wednesday and Thursday. It is important for students to be at school, on time, on these days!

If a child misses school on test day, they have to take the test in a make-up test setting. If they are pulled out of a test before they finish, and they leave campus, they cannot finish that day’s test. We want all of our Eagles to have the opportunity to do their best!

At the state level, in an effort to offset COVID-19’s impacts on Florida’s education system, a Senate committee gave bipartisan support to a proposal that would shield public-school students from testing accountability this year and protect colleges and universities from lawsuits.

The Senate Education Committee unanimously approved the measure (SB 7070), which includes two proposals by Democrats related to testing and letting parents choose to retain students in their current grade levels.

Lawmakers, parents and educators have raised concerns about such issues because of disruptions this school year — including many students learning remotely — during the COVID-19 pandemic.

The bill, in part, would prohibit state standardized assessments from being used “for calculating student performance measurement and evaluating personnel,” an issue proposed by Sen. Perry Thurston, D-Fort Lauderdale.

The proposal also would prohibit schools from being penalized with lower school grades based on test scores, which in some cases can force low-performing schools to implement turnaround plans or be taken over by charter-school operators. It would, however, allow schools that raise their grades to exit turnaround plans.

Highlands County saw an increase of 23 new COVID-19 cases, with the release of numbers on Sunday by the Florida Department of Health. The new cases bring the total number of cases seen in the county to 7,755, which consists of 7,667 resident cases and 88 non-resident cases.

As we’ve seen before in the past two weeks, FDOH made a correction in the number of deaths in the county, removing one from Saturday’s report, which brings the total back to 322.

The county’s testing was down, with 222 resident tests processed for the day, which resulted in a positivity rate of 10.36%.

Hospitalizations climbed four to 614. The Agency for Health Care Administration showed 31 people hospitalized with a primary diagnosis of COVID-19 as of early Sunday evening.

Of the new cases, two of them were in children 14 and younger, which brings the overall total in that age group to 516 cases.

The state numbers were down — both in new cases and in testing. The state reported 4,794 new cases, raising the overall total to 2,081,826 cases, which is broken into 2,042,881 resident cases and 38,945 non-resident cases. Testing was down, with just 63,892 negative resident tests, which yielded a positivity rate of 7.02%, the second-highest number seen in the last two weeks.

Once again, cases in those 14 and younger were running 50% higher than the overall average, as the age group made up 12% of the new cases. There were 584 new cases in that age group, which raises the overall number of cases to 171,786. There have been 1,125 hospitalizations involving children 14 and under and six deaths.

There were 36,913 hospitalized Saturday evening, which is slightly above the average of the last two weeks, but well below the 100,000 seen two months ago.

Expect numbers to be a little shaky the next few days, with some states not reporting on Easter Sunday. As of 5 p.m., Michigan had yet to update its numbers, while California updated at its regular time and reported 2,400 new cases and 109 deaths. Texas has been seeing better numbers lately and reported 1,465 confirmed cases on Sunday and 21 new deaths.

According to the Johns Hopkins University Center for Systems Science and Engineering, the United States has seen 30.7 million cases and had 554,988 virus-related deaths.

Globally, there have been 131.1 million cases and 2.85 million deaths.

SEBRING — The School Board of Highlands County will consider getting two appraisals on the JCPenney building at Lakeshore Mall at its meeting on Tuesday.

But, the board may be prompted to table the agenda item again if it doesn’t get a ruling or opinion from the State Auditor General on whether half-cent school sales tax revenue can be used to purchase a property for district offices.

Assistant Superintendent of Business Operations Mike Averyt said, as of Friday, there has been no word from the State Auditor General.

The district is still in negotiations on the price of the JCPenney property that was quoted at $40 per square feet, for 62,000 square, for a total price of about $2.4 million, Averyt said recently.

The former JCPenney building is owned by Lakeshore Mall.

The district paid $3.6 million in 2005 when it purchased the property for the Kindergarten Learning Center (a former grocery store with a few small stores), which was only 40,000 square feet, Averyt noted.

The district needs have increased which is why they are researching the property for a possible relocation of the district office, he said.

Currently the District Office is located in the buildings of the former E.O. Douglas High School, 426 School St. in Sebring.

If the district purchased the JCPenney building, most of the district offices would relocate to the former department store except for Transportation and Facilities.