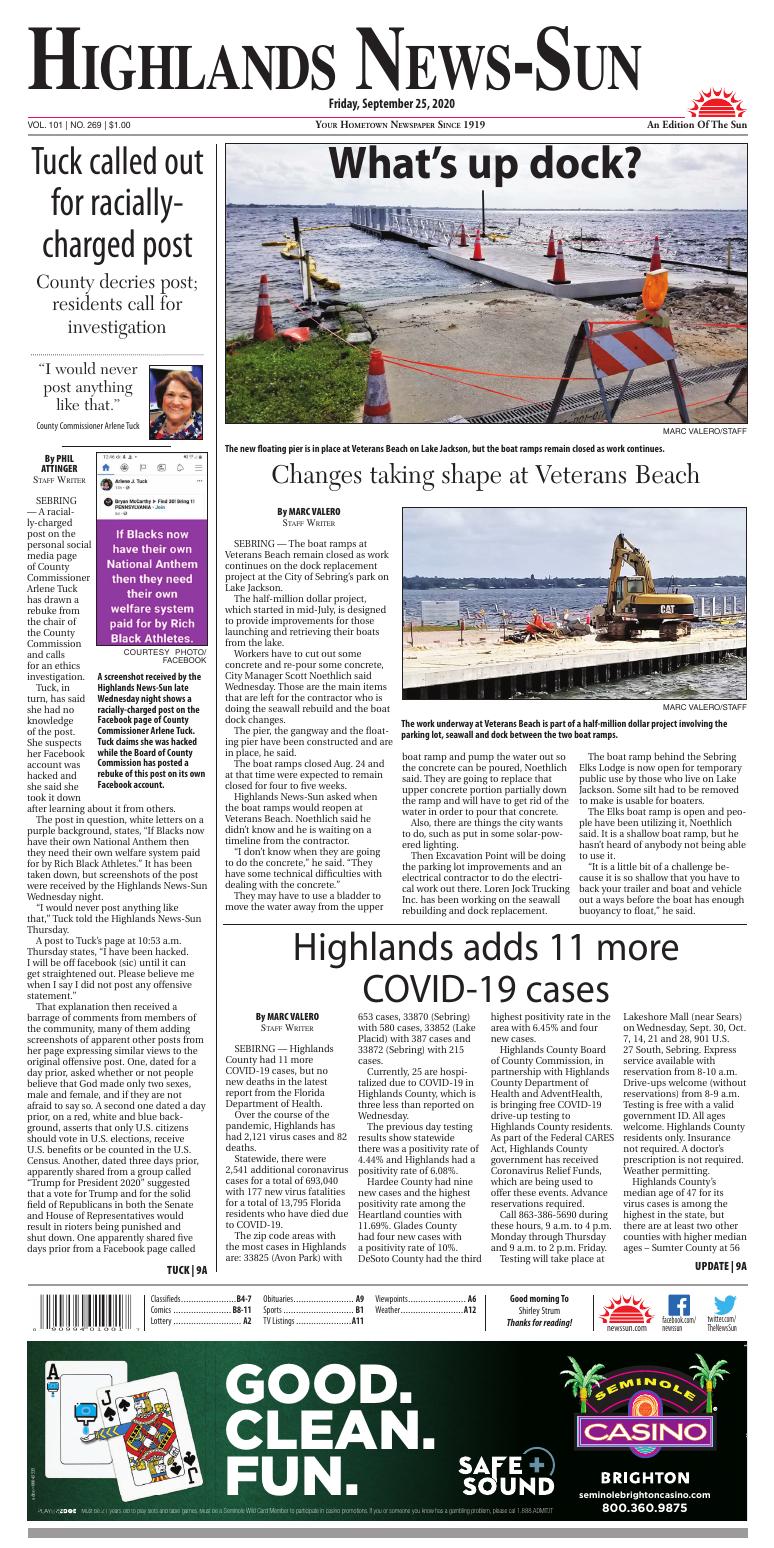 The Lake Jackson water level is very high due to the summer rains, which is presenting challenges for completion of the work on the new pier between the two boat ramps.

The new floating pier is in place at Veterans Beach on Lake Jackson, but the boat ramps remain closed as work continues.

The work underway at Veterans Beach is part of a half-million dollar project involving the parking lot, seawall and dock between the two boat ramps.

SEBRING — The boat ramps at Veterans Beach remain closed as work continues on the dock replacement project at the City of Sebring’s park on Lake Jackson.

The half-million dollar project, which started in mid-July, is designed to provide improvements for those launching and retrieving their boats from the lake.

Workers have to cut out some concrete and re-pour some concrete, City Manager Scott Noethlich said Wednesday. Those are the main items that are left for the contractor who is doing the seawall rebuild and the boat dock changes.

The pier, the gangway and the floating pier have been constructed and are in place, he said.

The boat ramps closed Aug. 24 and at that time were expected to remain closed for four to five weeks.

Highlands News-Sun asked when the boat ramps would reopen at Veterans Beach. Noethlich said he didn’t know and he is waiting on a timeline from the contractor.

“I don’t know when they are going to do the concrete,” he said. “They have some technical difficulties with dealing with the concrete.”

They may have to use a bladder to move the water away from the upper boat ramp and pump the water out so the concrete can be poured, Noethlich said. They are going to replace that upper concrete portion partially down the ramp and will have to get rid of the water in order to pour that concrete.

Also, there are things the city wants to do, such as put in some solar-powered lighting.

Then Excavation Point will be doing the parking lot improvements and an electrical contractor to do the electrical work out there. Loren Jock Trucking Inc. has been working on the seawall rebuilding and dock replacement.

The boat ramp behind the Sebring Elks Lodge is now open for temporary public use by those who live on Lake Jackson. Some silt had to be removed to make is usable for boaters.

The Elks boat ramp is open and people have been utilizing it, Noethlich said. It is a shallow boat ramp, but he hasn’t heard of anybody not being able to use it.

“It is a little bit of a challenge because it is so shallow that you have to back your trailer and boat and vehicle out a ways before the boat has enough buoyancy to float,” he said.

SEBIRNG — Highlands County had 11 more COVID-19 cases, but no new deaths in the latest report from the Florida Department of Health.

Over the course of the pandemic, Highlands has had 2,121 virus cases and 82 deaths.

Currently, 25 are hospitalized due to COVID-19 in Highlands County, which is three less than reported on Wednesday.

Highlands County Board of County Commission, in partnership with Highlands County Department of Health and AdventHealth, is bringing free COVID-19 drive-up testing to Highlands County residents. As part of the Federal CARES Act, Highlands County government has received Coronavirus Relief Funds, which are being used to offer these events. Advance reservations required.

Testing will take place at Lakeshore Mall (near Sears) on Wednesday, Sept. 30, Oct. 7, 14, 21 and 28, 901 U.S. 27 South, Sebring. Express service available with reservation from 8-10 a.m. Drive-ups welcome (without reservations) from 8-9 a.m. Testing is free with a valid government ID. All ages welcome. Highlands County residents only. Insurance not required. A doctor’s prescription is not required. Weather permitting.

Highlands County’s median age of 47 for its virus cases is among the highest in the state, but there are at least two other counties with higher median ages – Sumter County at 56 and Citrus with 52 for its median age of virus cases.

Alachua County appears to have the lowest median age (27) for cases among Florida counties by a wide margin. The 15-24 age group has 40% of the total number of cases in Alachua.

Statewide, 40 is the median age for coronavirus cases.

SEBRING — A racially-charged post on the personal social media page of County Commissioner Arlene Tuck has drawn a rebuke from the chair of the County Commission and calls for an ethics investigation.

Tuck, in turn, has said she had no knowledge of the post. She suspects her Facebook account was hacked and she said she took it down after learning about it from others.

The post in question, white letters on a purple background, states, “If Blacks now have their own National Anthem then they need their own welfare system paid for by Rich Black Athletes.” It has been taken down, but screenshots of the post were received by the Highlands News-Sun Wednesday night.

A post to Tuck’s page at 10:53 a.m. Thursday states, “I have been hacked. I will be off facebook (sic) until it can get straightened out. Please believe me when I say I did not post any offensive statement.”

That explanation then received a barrage of comments from members of the community, many of them adding screenshots of apparent other posts from her page expressing similar views to the original offensive post. One, dated for a day prior, asked whether or not people believe that God made only two sexes, male and female, and if they are not afraid to say so. A second one dated a day prior, on a red, white and blue background, asserts that only U.S. citizens should vote in U.S. elections, receive U.S. benefits or be counted in the U.S. Census. Another, dated three days prior, apparently shared from a group called “Trump for President 2020” suggested that a vote for Trump and for the solid field of Republicans in both the Senate and House of Representatives would result in rioters being punished and shut down. One apparently shared five days prior from a Facebook page called “Concerned Patriots” showed two African-American women, standing on an American flag and holding up their right fists. The caption reads, “Cancel the welfare checks of anyone who disrespects the U.S. flag. Share if you agree.” An apparent post from Sept. 3 shows two cartoon diagrams of police officers saying stop and persons either stopping and being hand-cuffed or not stopping and being handcuffed face-down in a pool of blood. The caption reads, “It’s NOT (sic) about color. It’s about the law. If you understand this ... please share. If you are still confused ... please keep studying it.” Another apparent share on Sept. 13 at 3:36 p.m. shows a group of people on a hilltop overlooking a valley, holding up flags — including the British flag — and a 15-20 yard banner that states “White Lives Matter.”

When asked about each of these, Tuck said she did not recall them and believes that they all may have been the work of someone else. She suggested an irate constituent, such as one who has sent her 15 emails in recent days.

“I hope people won’t hold it against me. It’s not me. Or hold it against my granddaughter,” Tuck said, referring to Kaylee Tuck, who is running for the Florida House of Representatives District 55.

The Highlands News-Sun attempted to contact both Kaylee Tuck and her father, Andy Tuck, who chairs the Florida State Board of Education. Messages were not returned.

Although Arlene Tuck has added many friends in recent weeks because of this year’s political campaigns, she claimed she mostly used Facebook for interaction with family and friends. “I kind of stay away from all that political stuff,” Tuck said.

Wednesday night’s post on her page drew a statement from Board of County Commission Chair Ron Handley on the county social media account.

“We regret the unfortunate post made on a county commissioner’s Facebook page. It was not appropriate and does not reflect the views of Highlands County government or the County Commission,” Handley’s statement reads. “We want to express our sincere apologies to all of the members of our community for this post. Highlands County remains dedicated to unifying our community and breaking the barriers that divide us so that we, as a community, can move forward in unity.”

Pastor George Miller of the United Church of Christ said he was glad to see an opportunity to bring the community together to discuss this issue, calmly, rather than let it explode. It’s been a matter of growing concern for him and other community leaders.

“People have been paying attention to her comments over the past month with growing concern over posts that are clearly racist, homophobic [and] divisive,” Miller said.

To her claim of being hacked, Miller said he did not reach out to her, as of yet, to ask her what she meant.

“When watching public figures and their Facebook posts, you are seeing who they want you to see,” Miller said.

Community leaders have been monitoring the Facebook pages of elected officials with concern, he said.

Felecia Dozier, mental health clinician from Sebring, took Tuck to task on her Facebook page, and also initiated emails and calls to both county and state officials, including the governor and the Florida State Board of Ethics, starting at 6:36 a.m. Thursday.

“They were very concerned, I must say, and they said that they would look into it,” Dozier said of county officials.

Tuck’s account had objectionable posts for nine months. Dozier said she finally stopped following her actively a month ago, “because it was becoming too much.”

“She has been on a roll, to be quite honest,” Dozier said of racially-charged objectionable posts. “She has a post like every day.”

When she objected to Tuck on Facebook, Dozier said, she got an argument ending in a laughing emoji.

“I hope that maybe this will be a wake-up call for her,” Dozier said. “My impression is that she does not see her ways, and so there is no wake-up call for her. What person in their right mind, that is part of the government in a small town, would post such degrading posts?”

Dozier thinks Tuck either believes she’s invincible or does not understand what she’s posting is degrading to others based on race, sex or economic class.

Miller, who also wrote to Handley and the governor said posts like the one Wednesday night hurt the community and the local economy.

“We need to find a way to make us one,” Dozier said. “What separates her from the others [posting such things] is her position here in the community. I feel there is no place for that at this time in life.”

“And you would think that in 2020 we would not be having this conversation,” Dozier added. “We need to love one another. We need to become our brothers’ and sister’s keepers. We need to look past the color of people’s skin.”

Miller said some people in the community have been scared to come forward about such things, but social media has now made it possible for them to come together with others who feel the same way.

“If we acknowledge what’s going on, we might avoid the struggles that other areas of the country are going through,” Miller said.

"Highlands County remains dedicated to unifying our community and breaking the barriers that divide us so that we, as a community, can move forward in unity." 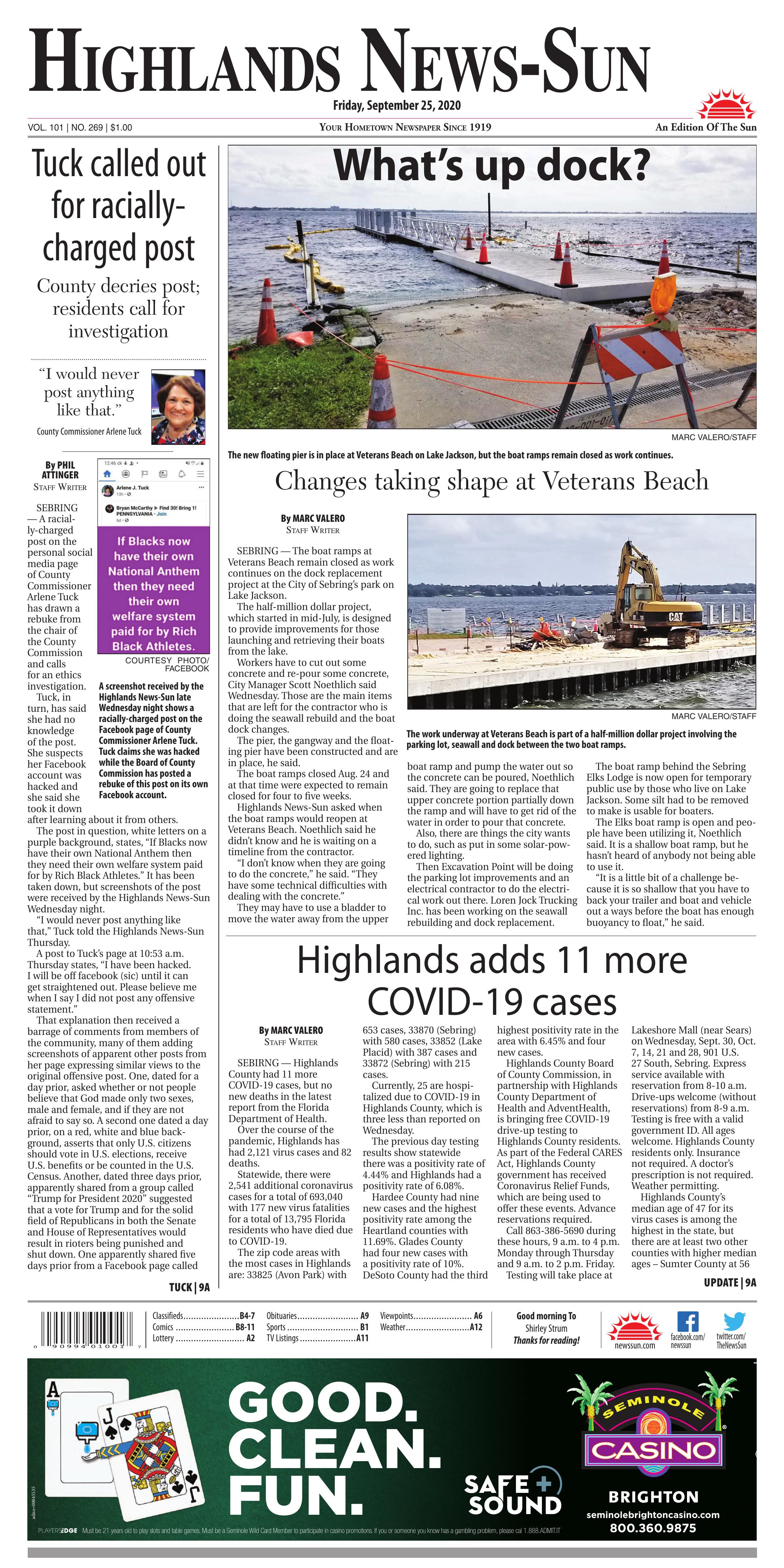