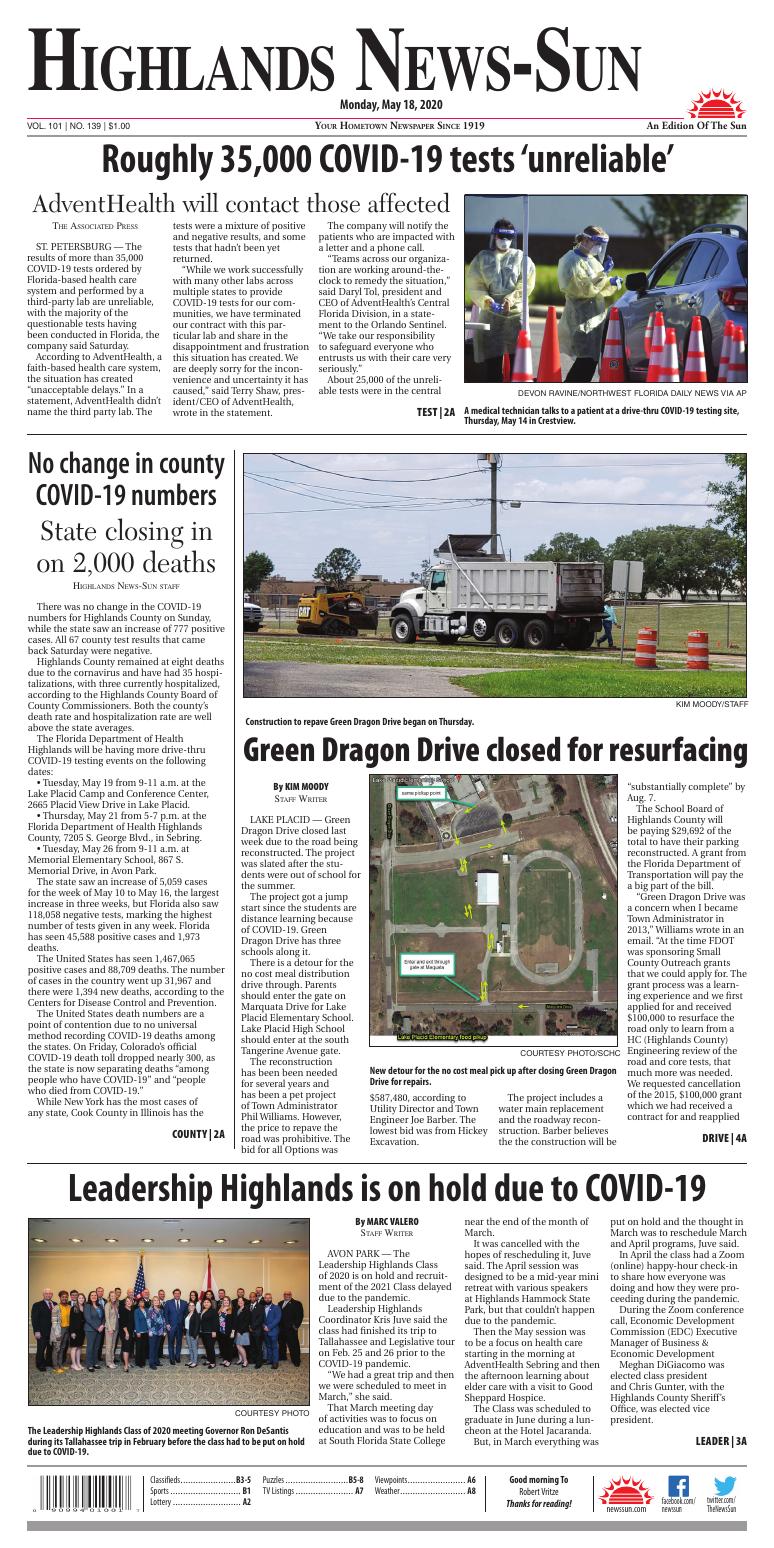 A medical technician talks to a patient at a drive-thru COVID-19 testing site, Thursday, May 14 in Crestview.

Medical personnel place a swab in a specimen container at a drive-thru COVID-19 testing site, Thursday, May 14 in Crestview.

ST. PETERSBURG — The results of more than 35,000 COVID-19 tests ordered by Florida-based health care system and performed by a third-party lab are unreliable, with the majority of the questionable tests having been conducted in Florida, the company said Saturday.

According to AdventHealth, a faith-based health care system, the situation has created “unacceptable delays.” In a statement, AdventHealth didn’t name the third party lab. The tests were a mixture of positive and negative results, and some tests that hadn’t been yet returned.

“While we work successfully with many other labs across multiple states to provide COVID-19 tests for our communities, we have terminated our contract with this particular lab and share in the disappointment and frustration this situation has created. We are deeply sorry for the inconvenience and uncertainty it has caused,” said Terry Shaw, president/CEO of AdventHealth, wrote in the statement.

The company will notify the patients who are impacted with a letter and a phone call.

“Teams across our organization are working around-the-clock to remedy the situation,” said Daryl Tol, president and CEO of AdventHealth’s Central Florida Division, in a statement to the Orlando Sentinel. “We take our responsibility to safeguard everyone who entrusts us with their care very seriously.”

About 25,000 of the unreliable tests were in the central Florida area.

AdventHealth spokeswoman Melanie Lawhorn said the company has 49 hospitals in nine states, but two of those states are joint venture systems and were not affected by the unreliable testing situation.

Just over 630,000 people in Florida have been tested for coronavirus as of Saturday afternoon.

According to state health statistics, there have been more than 44,800 confirmed cases in the state, and at least 1,964 deaths. Those numbers were announced as businesses prepare for a “Phase One” reopening on Monday. Since the start of May, parts of the state have allowed some businesses to reopen with limited capacity.

The state will increase restrictions on restaurant and retail store capacity from 25% to 50%, as well as allow the reopening of museums, libraries and gyms at 50% capacity. Bars and movie theaters will remain closed. Also, Miami-Dade and Broward counties will be allowed to begin slowly reopening.

Those two South Florida counties, along with Palm Beach County, have been the hardest hit by coronavirus and have seen about 58% of the state’s coronavirus cases.

Miami-Dade Mayor Carlos Gimenez said anyone in the county that’s going back to work on Monday needs to wear a face covering, and businesses must test all staff and hire deep cleaners if an employee tests positive for COVID-19.

Also in that county, The Miami Herald reported that one nursing home reported 14 additional COVID-19 deaths in the past week, bringing the total number of resident fatalities at the home to 22. It’s the most in South Florida and second most of any long-term care facility in the state, according to data released Friday by the Florida Department of Health.

The newspaper said earlier in the week that the state halted new admissions to the Fair Havens Center Nursing Home in Miami Springs, citing ineffective COVID-19 monitoring and isolation practices that created a “fertile ground for the virus to spread.”

Only one Florida nursing home has had more deaths than Fair Havens — Seminole Pavilion in Pinellas County, which has tallied 25, including one staffer.

LAKE PLACID — Green Dragon Drive closed last week due to the road being reconstructed. The project was slated after the students were out of school for the summer.

The project got a jump start since the students are distance learning because of COVID-19. Green Dragon Drive has three schools along it.

There is a detour for the no cost meal distribution drive through. Parents should enter the gate on Marquata Drive for Lake Placid Elementary School. Lake Placid High School should enter at the south Tangerine Avenue gate.

The reconstruction has been been needed for several years and has been a pet project of Town Administrator Phil Williams. However, the price to repave the road was prohibitive. The bid for all Options was $587,480, according to Utility Director and Town Engineer Joe Barber. The lowest bid was from Hickey Excavation.

The project includes a water main replacement and the roadway reconstruction. Barber believes the the construction will be “substantially complete” by Aug. 7.

The School Board of Highlands County will be paying $29,692 of the total to have their parking reconstructed. A grant from the Florida Department of Transportation will pay the a big part of the bill.

“Green Dragon Drive was a concern when I became Town Administrator in 2013,” Williams wrote in an email. “At the time FDOT was sponsoring Small County Outreach grants that we could apply for. The grant process was a learning experience and we first applied for and received $100,000 to resurface the road only to learn from a HC (Highlands County) Engineering review of the road and core tests, that much more was needed. We requested cancellation of the 2015, $100,000 grant which we had received a contract for and reapplied for $477,939 which FDOT granted and a contract was established in 2016 to reconstruct Green Dragon Drive — foundation and all.”

Barber did the design work for the project saving the town thousands of dollars.

“Green Dragon is a major South County roadway for the town and more importantly for the Greater Lake Placid area,” Williams said. “Three schools are located on the roadway along with the Greater Lake Placid’s main storm shelter at the high school. How such a poorly constructed road came to be a major server for such concentrated interest is left to history. I am not sure when the road was last resurfaced; however, from what I have learned Engineering practices have evolved to better test and calculate the long term foundational needs more so than historically throwing some asphalt over a sand foundation.”

In the past, Williams has jokingly said he wouldn’t retire until after Green Dragon Drive was paved. He has no immediate plans to retire. He said he would hate to leave the town in the middle of the COVID-19 crisis. He likened it to leaving during a hurricane and said he might not retire for another 10 years.

The Leadership Highlands Class of 2020 meeting Governor Ron DeSantis during its Tallahassee trip in February before the class had to be put on hold due to COVID-19.

AVON PARK — The Leadership Highlands Class of 2020 is on hold and recruitment of the 2021 Class delayed due to the pandemic.

Leadership Highlands Coordinator Kris Juve said the class had finished its trip to Tallahassee and Legislative tour on Feb. 25 and 26 prior to the COVID-19 pandemic.

“We had a great trip and then we were scheduled to meet in March,” she said.

That March meeting day of activities was to focus on education and was to be held at South Florida State College near the end of the month of March.

It was cancelled with the hopes of rescheduling it, Juve said. The April session was designed to be a mid-year mini retreat with various speakers at Highlands Hammock State Park, but that couldn’t happen due to the pandemic.

Then the May session was to be a focus on health care starting in the morning at AdventHealth Sebring and then the afternoon learning about elder care with a visit to Good Sheppard Hospice.

The Class was scheduled to graduate in June during a luncheon at the Hotel Jacaranda.

But, in March everything was put on hold and the thought in March was to reschedule March and April programs, Juve said.

In April the class had a Zoom (online) happy-hour check-in to share how everyone was doing and how they were proceeding during the pandemic.

This time of the year Juve is usually meeting with her partners and picking dates for the next class and recruiting for the Class of 2021.

The Leadership Highlands Advisory Board met recently to discuss options for the the remainder of the year, Juve said.

“How do we finish the year and allow the class to graduate and ensure the integrity of Leadership Highlands in finishing up?” she said. With the social distancing guidelines it will be challenging, but they are looking at the best way that will work for the class and ensure they will hear from the speakers that were scheduled in March, April and May.

Leadership Highlands was founded in 1999 to familiarize the participants with the infrastructure, agencies and economic enterprises that exist in Highlands County.

About 20-28 participants from the public and the private sector attend the monthly classes that are held in different locations that are appropriate for the focus of that day’s class.

For information about enrollment or participation, contact Kris Juve at 863-784-7189 or email juvek@southflorida.edu.

Juve is also the coordinator of the Retired and Senior Volunteer Program (RSVP) at South Florida State College.

There was no change in the COVID-19 numbers for Highlands County on Sunday, while the state saw an increase of 777 positive cases. All 67 county test results that came back Saturday were negative.

The Florida Department of Health Highlands will be having more drive-thru COVID-19 testing events on the following dates:

The state saw an increase of 5,059 cases for the week of May 10 to May 16, the largest increase in three weeks, but Florida also saw 118,058 negative tests, marking the highest number of tests given in any week. Florida has seen 45,588 positive cases and 1,973 deaths.

The United States has seen 1,467,065 positive cases and 88,709 deaths. The number of cases in the country went up 31,967 and there were 1,394 new deaths, according to the Centers for Disease Control and Prevention.

The United States death numbers are a point of contention due to no universal method recording COVID-19 deaths among the states. On Friday, Colorado’s official COVID-19 death toll dropped nearly 300, as the state is now separating deaths “among people who have COVID-19” and “people who died from COVID-19.”

With over 15,000 confirmed cases, Miami-Dade County has the 17th-highest number of cases of any county in the country.

Montana, Wyoming, Vermont, Alaska and Hawaii have each seen fewer than 1,000 cases.

Globally, there have been 4,687,320 cases and 313,973 deaths, according to John Hopkins. After the United States, the next three countries with the highest number of cases are Russia, the United Kingdom and Brazil. Spain and Italy are the two remaining countries with over 200,000 cases. 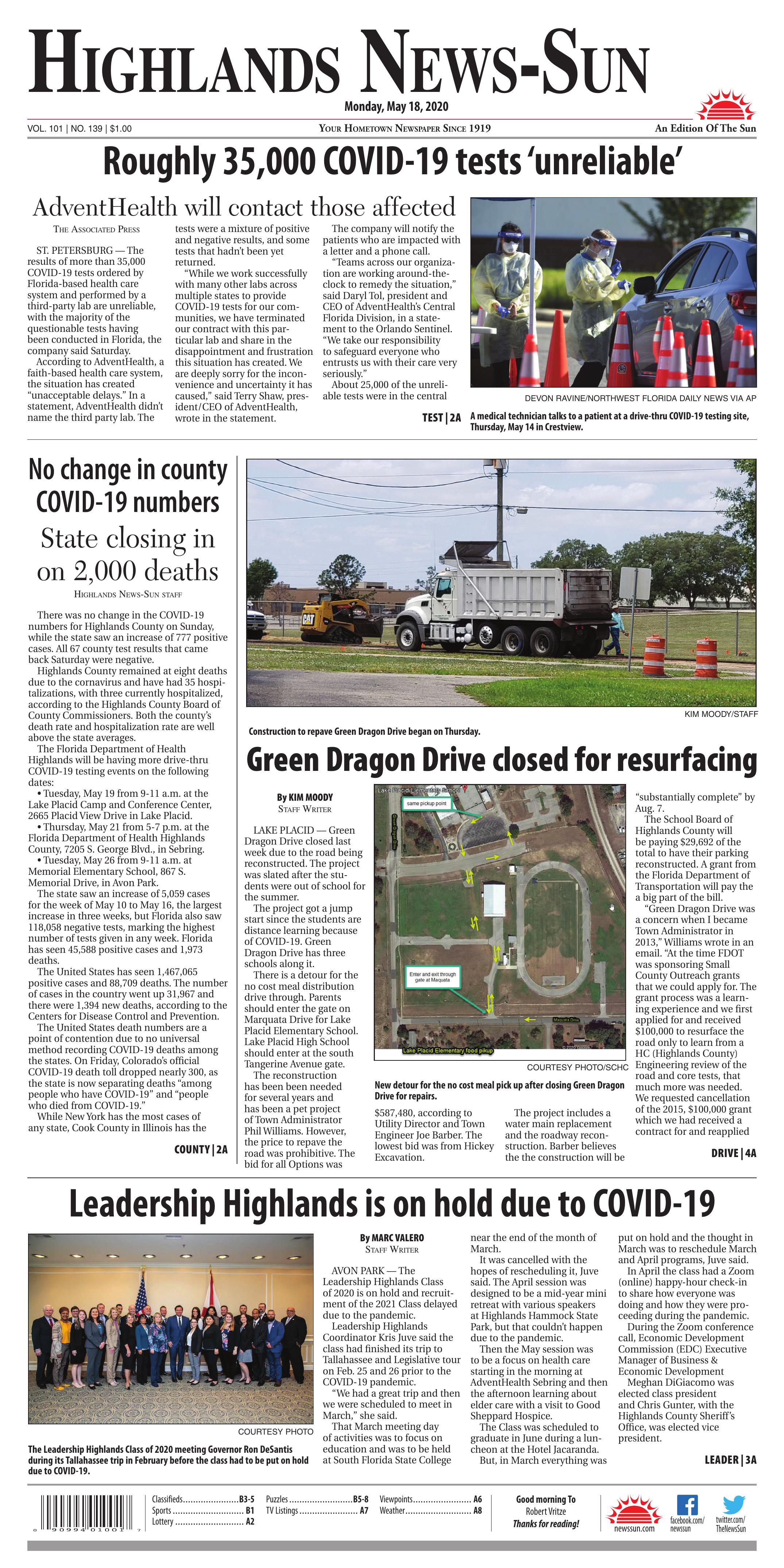