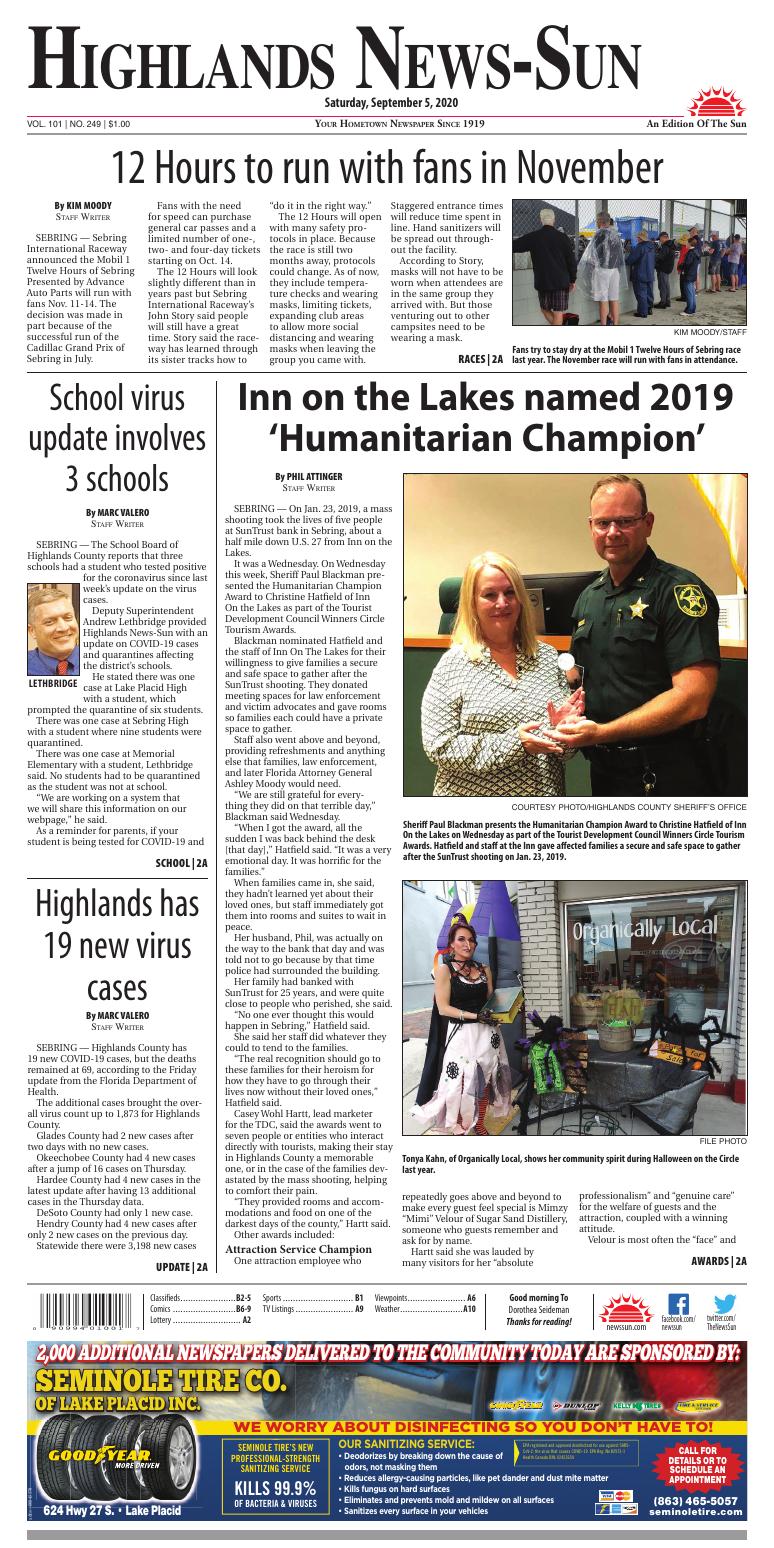 Fans try to stay dry at the Mobil 1 Twelve Hours of Sebring race last year. The November race will run with fans in attendance.

The Sebring Cows, here making the day of racer Katherine Legge, will have to wear masks at the Mobil 1 Twelve Hours of Sebring while they are out mingling this year.

SEBRING — Sebring International Raceway announced the Mobil 1 Twelve Hours of Sebring Presented by Advance Auto Parts will run with fans Nov. 11-14. The decision was made in part because of the successful run of the Cadillac Grand Prix of Sebring in July.

Fans with the need for speed can purchase general car passes and a limited number of one-, two- and four-day tickets starting on Oct. 14.

The 12 Hours will look slightly different than in years past but Sebring International Raceway’s John Story said people will still have a great time. Story said the raceway has learned through its sister tracks how to “do it in the right way.”

The 12 Hours will open with many safety protocols in place. Because the race is still two months away, protocols could change. As of now, they include temperature checks and wearing masks, limiting tickets, expanding club areas to allow more social distancing and wearing masks when leaving the group you came with. Staggered entrance times will reduce time spent in line. Hand sanitizers will be spread out throughout the facility.

According to Story, masks will not have to be worn when attendees are in the same group they arrived with. But those venturing out to other campsites need to be wearing a mask.

He likened the changes to putting on a mask to go into the grocery store and not wearing it when you are at home.

“We hope people don’t even realize the restrictions in place,” he said. “We ask and expect people to be responsible.”

The paddock will be one “bubble” for the race teams, hospitality and guest suites are in the pit and the last pit includes the midway and east paddock. The foot bridge will be open for hospitality guests only. There is no word yet if the Sebring Cows or Drunk Monks will have a separate bubble.

The popular grid walk will not be taking place in November.

The midway, named Vendor Village, is the place to find all vendors and display partners.

Club Sebring has been moved into two much larger suites to accommodate the 225 people. The Celebrity Luxury Lounge has been expanded to double its size to accommodate its 350 guest.

“It will be exact same race on the track,” Story said. “People will be able to see their friends. People have been meeting up here for years.”

Tonya Kahn, of Organically Local, shows her community spirit during Halloween on the Circle last year.

Sheriff Paul Blackman presents the Humanitarian Champion Award to Christine Hatfield of Inn On the Lakes on Wednesday as part of the Tourist Development Council Winners Circle Tourism Awards. Hatfield and staff at the Inn gave affected families a secure and safe space to gather after the SunTrust shooting on Jan. 23, 2019.

Bartender Mimi Velour always has a smile as she pours tiny samples of the products produced at Sugar Sand Distillery.

It was a Wednesday. On Wednesday this week, Sheriff Paul Blackman presented the Humanitarian Champion Award to Christine Hatfield of Inn On the Lakes as part of the Tourist Development Council Winners Circle Tourism Awards.

Blackman nominated Hatfield and the staff of Inn On The Lakes for their willingness to give families a secure and safe space to gather after the SunTrust shooting. They donated meeting spaces for law enforcement and victim advocates and gave rooms so families each could have a private space to gather.

Staff also went above and beyond, providing refreshments and anything else that families, law enforcement, and later Florida Attorney General Ashley Moody would need.

“We are still grateful for everything they did on that terrible day,” Blackman said Wednesday.

“When I got the award, all the sudden I was back behind the desk [that day],” Hatfield said. “It was a very emotional day. It was horrific for the families.”

When families came in, she said, they hadn’t learned yet about their loved ones, but staff immediately got them into rooms and suites to wait in peace.

Her husband, Phil, was actually on the way to the bank that day and was told not to go because by that time police had surrounded the building.

Her family had banked with SunTrust for 25 years, and were quite close to people who perished, she said.

“No one ever thought this would happen in Sebring,” Hatfield said.

She said her staff did whatever they could to tend to the families.

“The real recognition should go to these families for their heroism for how they have to go through their lives now without their loved ones,” Hatfield said.

Casey Wohl Hartt, lead marketer for the TDC, said the awards went to seven people or entities who interact directly with tourists, making their stay in Highlands County a memorable one, or in the case of the families devastated by the mass shooting, helping to comfort their pain.

“They provided rooms and accommodations and food on one of the darkest days of the county,” Hartt said.

One attraction employee who repeatedly goes above and beyond to make every guest feel special is Mimzy “Mimi” Velour of Sugar Sand Distillery, someone who guests remember and ask for by name.

Hartt said she was lauded by many visitors for her “absolute professionalism” and “genuine care” for the welfare of guests and the attraction, coupled with a winning attitude.

Velour is most often the “face” and voice of the distillery as she conducts the spirit tastings, talks about the distillery and its products and entertains the guests to ensure they have fun during their visit.

Hartt said a hotel, motel or resort employee who repeatedly goes above and beyond to make every guest feel special is Yanique Blacklellar of Inn on the Lakes.

Hartt said Blacklellar welcomes people with a smile, and enjoys seeing guests depart with a smile after their vacation here gives her great joy. Hotel guests know her by name. From the very moment they call in to make reservations, they normally ask to speak with her. And even if she is busy, she will take the time to assist them. Once they arrive on property, they feel compelled to stop by the front desk to say hello on each visit, and her employer receives numerous letters and thank you cards from guests praising her dedicated service.

A restaurant staff member who provides exemplary service to guests and uses their own imagination as well as resources at the restaurant to enhance the guest experience is Debra Overbeck of Chicane’s Restaurant.

Hartt said Overbeck has worked there more than 15 years, starting as a server in the restaurant and moving toward serving at the restaurant’s banquets and off-site events. Most repeat banquet and special event clients request her by name, Hartt siad.

Overbeck now heads up the Banquet Department and trains not only banquet servers but also the new hires. Hartt said Overbeck has been seen to stop what she is doing to help people wondering around the property, always wearing a smile and making someone’s experience more pleasurable.

Among the newest individuals at a hotel, attraction, retail or tourism-focused business team who is always willing to give time, talent, imagination and resources to create the ideal environment for guests is actually two people, Tonya Kahn and Stephanie Nelson, who created one of Sebring’s newest restaurants and the first eatery in the area to focus on locally sourced, organic foods.

Their store, Organically Local, off the Circle on North Ridgewood Drive in downtown Sebring, has become a “one-stop shop” for locally grown, harvested and handmade products since they opened in March 2019, along with providing a customer dining experience that goes beyond a healthy, delicious meal, Hartt said.

A person who offers his or her time, energy and skills for a service or undertaking that benefits others, without compensation, is Natalee Kovens at the Peter Powell Roberts Museum in Avon Park.

During her more than 500 volunteer hours, Kovens has enthusiastically greeted patrons as they enter the venue, shared interesting information in a friendly manner and has consistently done everything in her power to meet the needs and requests of the museum guests, Hartt said.

Kovens serves on the Heartland Cultural Alliance Board of Directors, anticipated and prepared for upcoming activities, assisted in the training of new docents, helped create policies & procedures and worked in data entry and sales

The Innovation Champion Award this year went to the team of Tiffany Cadzow and Devra Moore who used imagination, creativity and innovation to bring the Mon Cirque Wine Bar to life in January 2019, off the Circle on North Commerce Avenue in downtown Sebring.

Cadzow had already had success with Faded Bistro & Beer Garden, Hartt said, and brought the Mon Cirque and created an atmosphere inspired by vintage French décor and the circus, including an offering on the menu of Acrobat wine..

Hartt said visitors have reported that the whimsical wine bar that makes for great photos and destination stories.

SEBRING — The School Board of Highlands County reports that three schools had a student who tested positive for the coronavirus since last week’s update on the virus cases.

He stated there was one case at Lake Placid High with a student, which prompted the quarantine of six students.

There was one case at Sebring High with a student where nine students were quarantined.

There was one case at Memorial Elementary with a student, Lethbridge said. No students had to be quarantined as the student was not at school.

“We are working on a system that we will share this information on our webpage,” he said.

As a reminder for parents, if your student is being tested for COVID-19 and waiting for test results, do not send your child to school, Lethbridge stressed.

There was another meeting with the medical task force on Aug. 31 with representatives from the Health Department, Advent Health, Highlands Regional Medical Center, Highlands Urgent Care (the district’s medical provider) and many local pediatricians.

“We reviewed our current data and discussed future steps,” Lethbridge said. “We are extremely blessed to have formed the partnerships in this work.

“From medical advice and guidance to sharing best practices, it allows a safe and open forum for ideas to be shared and help form policy. It also gives us a chance for all of the organizations to get on the same page.”

The medical task force’s next meeting is scheduled at 8:30 a.m., Oct. 2, as we continue this important work, he said.

SEBRING — Highlands County has 19 new COVID-19 cases, but the deaths remained at 69, according to the Friday update from the Florida Department of Health.

The additional cases brought the overall virus count up to 1,873 for Highlands County.

Glades County had 2 new cases after two days with no new cases.

Okeechobee County had 4 new cases after a jump of 16 cases on Thursday.

DeSoto County had only 1 new case.

Hendry County had 4 new cases after only 2 new cases on the previous day.

The Pediatric Report shows the following number of cases in those under 18 years of age in the Heartland counties: Highlands 134, Hardee 174, DeSoto 219, Okeechobee 194, Glades 30 and Hendry 255.

A report based on information from the Florida Department of Corrections shows there have been 2 inmate deaths at the Avon Park Correctional Institution. 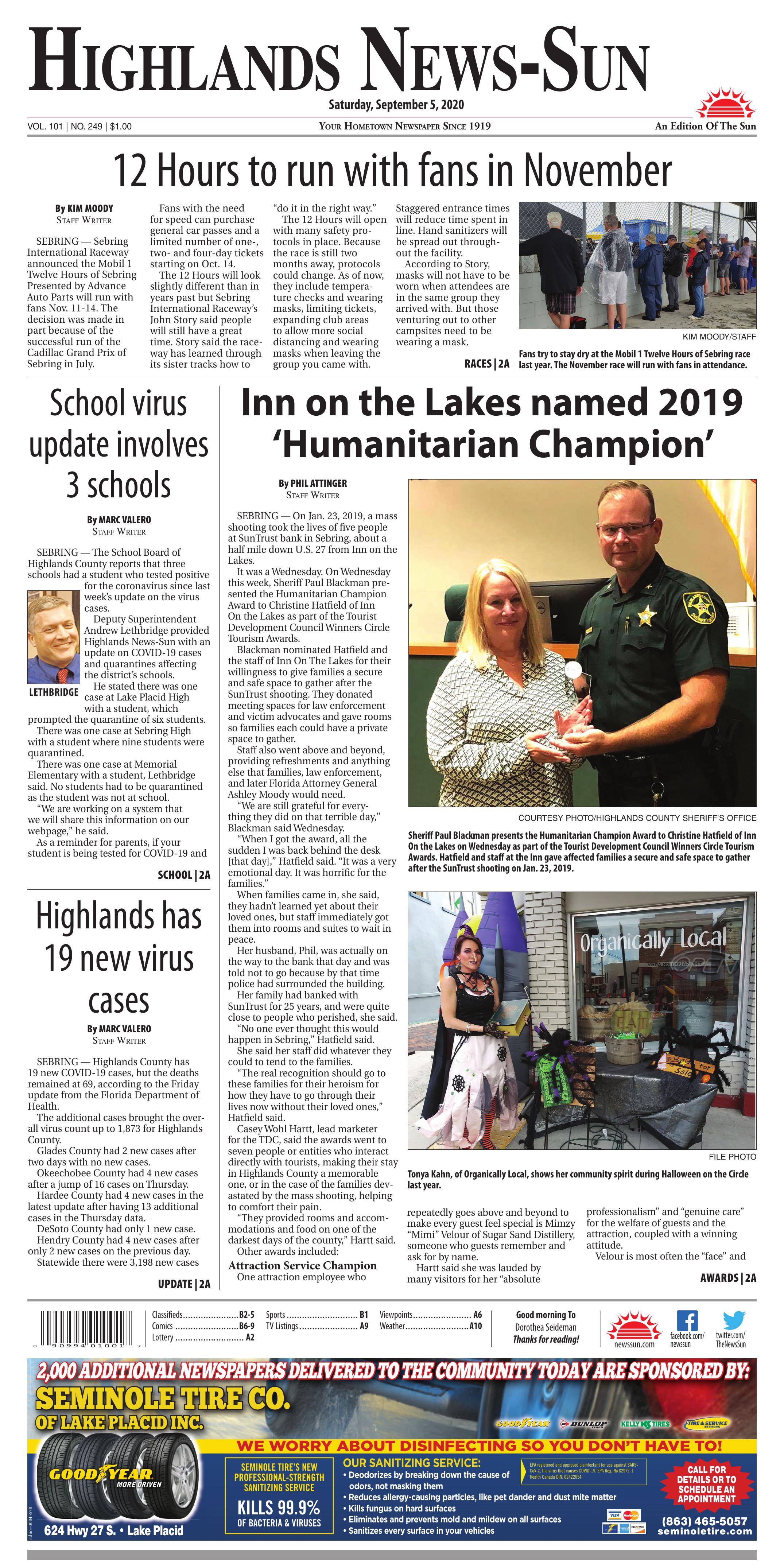