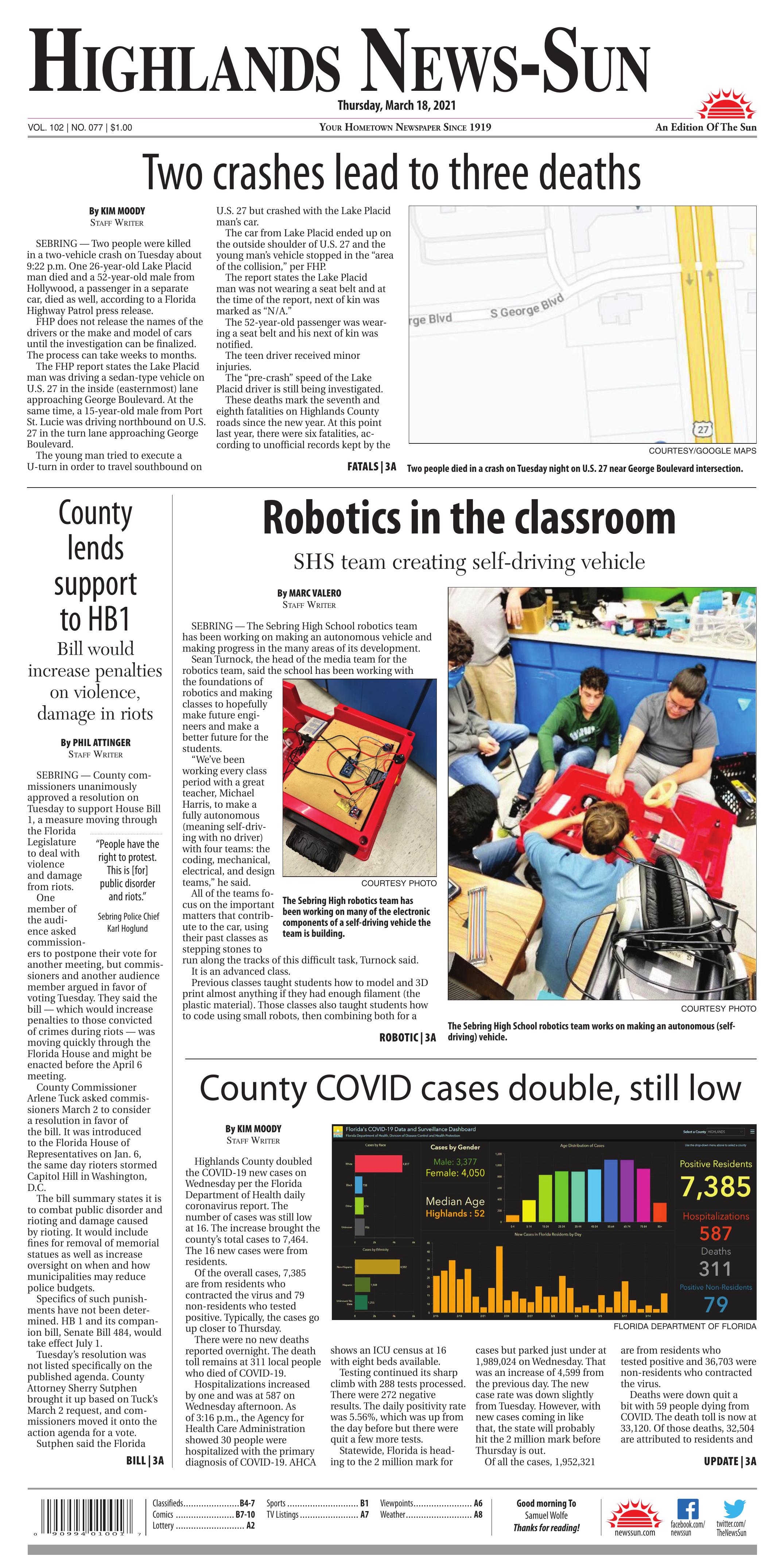 Two people died in a crash on Tuesday night on U.S. 27 near George Boulevard intersection.

SEBRING — Two people were killed in a two-vehicle crash on Tuesday about 9:22 p.m. One 26-year-old Lake Placid man died and a 52-year-old male from Hollywood, a passenger in a separate car, died as well, according to a Florida Highway Patrol press release.

FHP does not release the names of the drivers or the make and model of cars until the investigation can be finalized. The process can take weeks to months.

The young man tried to execute a U-turn in order to travel southbound on U.S. 27 but crashed with the Lake Placid man’s car.

The car from Lake Placid ended up on the outside shoulder of U.S. 27 and the young man’s vehicle stopped in the “area of the collision,” per FHP.

The report states the Lake Placid man was not wearing a seat belt and at the time of the report, next of kin was marked as “N/A.”

The 52-year-old passenger was wearing a seat belt and his next of kin was notified.

The “pre-crash” speed of the Lake Placid driver is still being investigated.

These deaths mark the seventh and eighth fatalities on Highlands County roads since the new year. At this point last year, there were six fatalities, according to unofficial records kept by the Highlands News-Sun.

The FHP did not report if the 15-year-old had a learner’s license (permit) to drive. Florida Department of Highway Safety and Motor Vehicles shows the following restrictions: daylight driving for the first three months after the license is issued, then until 10 p.m.; must hold the learner’s license for 12 months or until the 18th birthday, whichever is first and requires 50 hours of supervised driving with 10 of those being at night.

Although the crash is still under investigation, the preliminary investigation shows Pfantz was eastbound on Smith Lane and may have had some sort of medical episode. The Ford truck he was driving went through a red light and into the southbound lanes of U.S. 98.

The trajectory took Pfantz’s black truck into the path of Jamison’s red truck where it hit the black truck’s driver side door. The impact sent both trucks “rolled across the median and entered the northbound lanes of U.S. 98.”

Jamison’s red truck also hit the front of the semi, which was in the center lane of northbound U.S. 98. The black truck hit the side of the semi.

Harris was driving in the inside northbound lane trying to avoid the wreck but PCSO said she lost control and the car started to spin. Her car was hit by Green’s white truck.

No criminal charges are expected but the investigation continues.

The Sebring High robotics team has been working on many of the electronic components of a self-driving vehicle the team is building.

SEBRING — The Sebring High School robotics team has been working on making an autonomous vehicle and making progress in the many areas of its development.

Sean Turnock, the head of the media team for the robotics team, said the school has been working with the foundations of robotics and making classes to hopefully make future engineers and make a better future for the students.

“We’ve been working every class period with a great teacher, Michael Harris, to make a fully autonomous (meaning self-driving with no driver) with four teams: the coding, mechanical, electrical, and design teams,” he said.

All of the teams focus on the important matters that contribute to the car, using their past classes as stepping stones to run along the tracks of this difficult task, Turnock said.

It is an advanced class.

“By teaching us how to 3D print, the design team has been able to make parts for the vehicle including gears to maximize turning and torque,” Turnock said. “They also made a battery clamp in the event that if the car ever falls over then the battery will stay in place and not go flying.

“The car isn’t fully autonomous and we are working on programming cameras, motions sensors, and lights on it like RGB’s (red, green, blue, LED lighting),” he said. “We have gotten the car to move and are trying out different steering ideas and mechanisms.”

Highlands County doubled the COVID-19 new cases on Wednesday per the Florida Department of Health daily coronavirus report. The number of cases was still low at 16. The increase brought the county’s total cases to 7,464.The 16 new cases were from residents.

Of the overall cases, 7,385 are from residents who contracted the virus and 79 non-residents who tested positive. Typically, the cases go up closer to Thursday.

There were no new deaths reported overnight. The death toll remains at 311 local people who died of COVID-19.

Hospitalizations increased by one and was at 587 on Wednesday afternoon. As of 3:16 p.m., the Agency for Health Care Administration showed 30 people were hospitalized with the primary diagnosis of COVID-19. AHCA shows an ICU census at 16 with eight beds available.

Testing continued its sharp climb with 288 tests processed. There were 272 negative results. The daily positivity rate was 5.56%, which was up from the day before but there were quit a few more tests.

Statewide, Florida is heading to the 2 million mark for cases but parked just under at 1,989,024 on Wednesday. That was an increase of 4,599 from the previous day. The new case rate was down slightly from Tuesday. However, with new cases coming in like that, the state will probably hit the 2 million mark before Thursday is out.

Of all the cases, 1,952,321 are from residents who tested positive and 36,703 were non-residents who contracted the virus.

Testing continued to rise with 84,910 processed with 80,183 negative results. The daily positivity rate came down slightly at 5.57%.

Florida continues to lead the nation in the U.K. variant cases, having 738 of the 4,686 cases in the country. The state also has seen 13 of the 27 Brazilian variant cases.

Numbers in the United States remained consistent, as there were 49,431 new cases reported on Thursday. That’s slightly below the seven-day average of 52,330 new cases for the past seven days and a decrease of 5% from the average of 55,079 new cases per day as of a week ago.

There were 1,096 new deaths reported, which is in line with the rolling seven day average of 1,117 deaths seen per day over the last week. Hospitalizations have leveled off a bit after seeing declines for more than 50 consecutive days. The number of hospitalizations reported Tuesday night were 36,482, which is several hundred more than were reported Monday evening. The 7,225 ICU patients is 25 fewer than Monday night.

Testing has also continued to drop, with the 1.08 million tests roughly 350,000 fewer than the seven-day average and is down 19% from a month ago.

According to the Johns Hopkins University Center for Systems Science and Engineering, the United States has seen a total of 29.58 million cases and had 537,527 deaths.

Globally, there have been 121 million cases and 2.675 million deaths.

SEBRING — County commissioners unanimously approved a resolution on Tuesday to support House Bill 1, a measure moving through the Florida Legislature to deal with violence and damage from riots.

One member of the audience asked commissioners to postpone their vote for another meeting, but commissioners and another audience member argued in favor of voting Tuesday. They said the bill — which would increase penalties to those convicted of crimes during riots — was moving quickly through the Florida House and might be enacted before the April 6 meeting.

County Commissioner Arlene Tuck asked commissioners March 2 to consider a resolution in favor of the bill. It was introduced to the Florida House of Representatives on Jan. 6, the same day rioters stormed Capitol Hill in Washington, D.C.

The bill summary states it is to combat public disorder and rioting and damage caused by rioting. It would include fines for removal of memorial statues as well as increase oversight on when and how municipalities may reduce police budgets.

Specifics of such punishments have not been determined. HB 1 and its companion bill, Senate Bill 484, would take effect July 1.

Tuesday’s resolution was not listed specifically on the published agenda. County Attorney Sherry Sutphen brought it up based on Tuck’s March 2 request, and commissioners moved it onto the action agenda for a vote.

Sutphen said the Florida Association of Counties is monitoring the bill’s progress.

In answer to the audience question for the need, Commission Chair Scott Kirouac referenced protests from the previous year.

“This resolution is basically stating we want to encourage peaceful protests,” Kirouac said. He said police stood by at riots last year with no authority to act, adding that their support states “we believe in peaceful protest” versus violent protest with property damage.

Statewide opponents of the bill have decried it as criminalizing protests, revoking state funding for any decrease in municipal police budgets and putting mandatory sentences on those arrested and charged during a riot.

Local law enforcement officials haven’t commented much, wanting time to review the bill. Sebring Police Chief Karl Hoglund, who had not gone through it, told the Highlands News-Sun he understood it to increase accountability for actions during riots.

HB 1, as recommended, would amend Florida Statutes in the following sections:

- Section 166.241 to authorize a resident of a municipality to file an appeal to the Administration Commission if the city government makes specific reductions to that city’s law enforcement department. Based on that petition, the Governor’s Office would conduct a budget hearing on it and make recommendations to the Administration Commission which could then approve, amend, or modify the city’s budget.

- Section 316.2045 prohibitions on obstructing traffic by standing on the street, highway, or road by deleting provisions concerning charitable solicitations.

- Section 768.28 to create a cause of action against a city for obstructing or interfering with reasonable law enforcement protection during a riot or an unlawful assembly, as well as waiving sovereign immunity for a municipality in specific circumstances.

- Section 784.011 to reclassify the penalty for an assault committed during a riot and would amend F.S. 784.021 to increase the severity of such an offense in the Criminal Punishment Code.

- Section 784.03 to reclassify the penalty for a battery committed during a riot, as well as amend F.S. 784.045 to increase the offense severity ranking of an aggravated battery if done during a riot.

- Section 784.0495, a new section, to prohibit certain assemblies from using or threatening the use of force against another person to coerce them to act a certain way or hold a certain viewpoint. Anyone arrested for such a violation would have to be held until first appearance in front of a judge.

- Section 784.07 to set a minimum prison term for someone convicted of battery on a law enforcement officer during a riot.

- Section 806.13 to prohibit defacing, injuring, damaging, or destroying a memorial and requiring the court to order restitution as part of the penalty.

- Section 810.02 to reclassify specified burglary offenses committed during a riot, and holding a defendant in custody until first appearance.

- Section 812.014 to reclassify certain theft offenses, if committed during a riot and facilitated by conditions arising from the riot, and holding that person in custody until first appearance.

- Sections 870.02 and 870.03, requiring a person arrested for an unlawful assembly, a riot or a rout to be held in custody until first appearance.

- Section 870.07 to create an defense to a civil action against police if the plaintiff participated in a riot or unlawful assembly.

- Section 872.02 to increase the severity of offense involving graves and tombs if done during a riot.

"People have the right to protest. This is [for] public disorder and riots." Sebring Police Chief Karl Hoglund