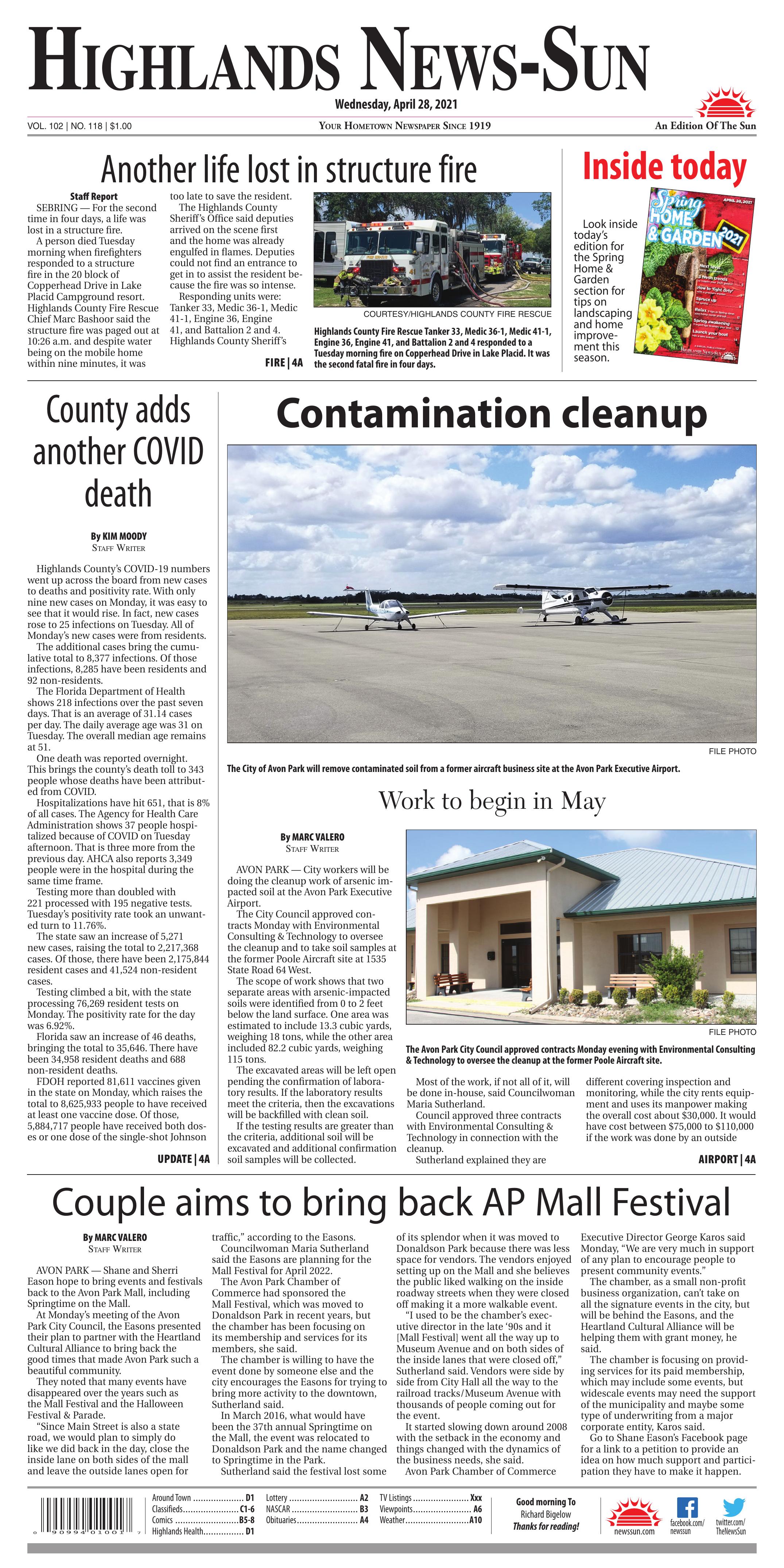 Highlands County Fire Rescue Tanker 33, Medic 36-1, Medic 41-1, Engine 36, Engine 41, and Battalion 2 and 4 responded to a Tuesday morning fire on Copperhead Drive in Lake Placid. It was the second fatal fire in four days.

SEBRING — For the second time in four days, a life was lost in a structure fire.

A person died Tuesday morning when firefighters responded to a structure fire in the 20 block of Copperhead Drive in Lake Placid Campground resort. Highlands County Fire Rescue Chief Marc Bashoor said the structure fire was paged out at 10:26 a.m. and despite water being on the mobile home within nine minutes, it was too late to save the resident.

The Highlands County Sheriff’s Office said deputies arrived on the scene first and the home was already engulfed in flames. Deputies could not find an entrance to get in to assist the resident because the fire was so intense.

In the second fatal fire, Savannah Roland, 22, died early Saturday in a house fire in the 4100 block of Sparta Road in Sebring. According to the Florida Department of Financial Services, this fire investigation is open and ongoing. No additional details are available at this time.

Officials said the fire is not considered suspicious at this time, but that may change as the investigation continues.

The DFS investigation focuses on the origin and cause of the fire incident.

HCSO reported the fire victim’s body was found by the door.

The sheriff’s office reported the fire was put out by an individual with a water hose, but that person had left by the time units arrived at the scene. The person who put out the fire was later identified by HSCO.

The cause of both fires are being investigated by the state Fire Marshal office.

The City of Avon Park will remove contaminated soil from a former aircraft business site at the Avon Park Executive Airport.

AVON PARK — City workers will be doing the cleanup work of arsenic impacted soil at the Avon Park Executive Airport.

The City Council approved contracts Monday with Environmental Consulting & Technology to oversee the cleanup and to take soil samples at the former Poole Aircraft site at 1535 State Road 64 West.

If the testing results are greater than the criteria, additional soil will be excavated and additional confirmation soil samples will be collected.

Most of the work, if not all of it, will be done in-house, said Councilwoman Maria Sutherland.

Council approved three contracts with Environmental Consulting & Technology in connection with the cleanup.

Sutherland explained they are different covering inspection and monitoring, while the city rents equipment and uses its manpower making the overall cost about $30,000. It would have cost between $75,000 to $110,000 if the work was done by an outside company.

“We have the capacity and the capability to do it,” she said. “We have staff that is very well prepared to do that kind of work.

“It will save the taxpayers a lot of money by us doing it ourselves.”

According to the agreement with Environmental Consulting & Technology, the work will be conducted between 4 p.m. and 8 p.m. with the field work beginning May 17.

It is anticipated that the excavation will require two to three days of field work. The laboratory results should be available within one to two days.

A report documenting the field activities and confirmatory soil sample results will be provided within three weeks.

The soil contamination at the airport was initially discovered in 2015.

At the time, two aircraft-related businesses were found to have caused soil contamination. Cleanup at one site had been completed years ago, but the former Poole Industries site, which was previously Dumont Aircraft, required additional cleanup.

AVON PARK — Shane and Sherri Eason hope to bring events and festivals back to the Avon Park Mall, including Springtime on the Mall.

At Monday’s meeting of the Avon Park City Council, the Easons presented their plan to partner with the Heartland Cultural Alliance to bring back the good times that made Avon Park such a beautiful community.

They noted that many events have disappeared over the years such as the Mall Festival and the Halloween Festival & Parade.

“Since Main Street is also a state road, we would plan to simply do like we did back in the day, close the inside lane on both sides of the mall and leave the outside lanes open for traffic,” according to the Easons.

Councilwoman Maria Sutherland said the Easons are planning for the Mall Festival for April 2022.

The Avon Park Chamber of Commerce had sponsored the Mall Festival, which was moved to Donaldson Park in recent years, but the chamber has been focusing on its membership and services for its members, she said.

The chamber is willing to have the event done by someone else and the city encourages the Easons for trying to bring more activity to the downtown, Sutherland said.

In March 2016, what would have been the 37th annual Springtime on the Mall, the event was relocated to Donaldson Park and the name changed to Springtime in the Park.

Sutherland said the festival lost some of its splendor when it was moved to Donaldson Park because there was less space for vendors. The vendors enjoyed setting up on the Mall and she believes the public liked walking on the inside roadway streets when they were closed off making it a more walkable event.

“I used to be the chamber’s executive director in the late ‘90s and it [Mall Festival] went all the way up to Museum Avenue and on both sides of the inside lanes that were closed off,” Sutherland said. Vendors were side by side from City Hall all the way to the railroad tracks/Museum Avenue with thousands of people coming out for the event.

It started slowing down around 2008 with the setback in the economy and things changed with the dynamics of the business needs, she said.

Avon Park Chamber of Commerce Executive Director George Karos said Monday, “We are very much in support of any plan to encourage people to present community events.”

The chamber, as a small non-profit business organization, can’t take on all the signature events in the city, but will be behind the Easons, and the Heartland Cultural Alliance will be helping them with grant money, he said.

The chamber is focusing on providing services for its paid membership, which may include some events, but widescale events may need the support of the municipality and maybe some type of underwriting from a major corporate entity, Karos said.

Go to Shane Eason’s Facebook page for a link to a petition to provide an idea on how much support and participation they have to make it happen.

Highlands County’s COVID-19 numbers went up across the board from new cases to deaths and positivity rate. With only nine new cases on Monday, it was easy to see that it would rise. In fact, new cases rose to 25 infections on Tuesday. All of Monday’s new cases were from residents.

The additional cases bring the cumulative total to 8,377 infections. Of those infections, 8,285 have been residents and 92 non-residents.

The Florida Department of Health shows 218 infections over the past seven days. That is an average of 31.14 cases per day. The daily average age was 31 on Tuesday. The overall median age remains at 51.

One death was reported overnight. This brings the county’s death toll to 343 people whose deaths have been attributed from COVID.

Hospitalizations have hit 651, that is 8% of all cases. The Agency for Health Care Administration shows 37 people hospitalized because of COVID on Tuesday afternoon. That is three more from the previous day. AHCA also reports 3,349 people were in the hospital during the same time frame.

Testing climbed a bit, with the state processing 76,269 resident tests on Monday. The positivity rate for the day was 6.92%.

FDOH reported 81,611 vaccines given in the state on Monday, which raises the total to 8,625,933 people to have received at least one vaccine dose. Of those, 5,884,717 people have received both doses or one dose of the single-shot Johnson & Johnson vaccine.

Numbers in the U.S. bounced upwards as expected on Monday, as states reported 53,944 new cases. That’s 5,615 lower than last Monday and a shade below the seven-day average of 54,140.

The country’s positivity rates continued its slight downward path, with the seven-day average at 3.64%, a 16% decrease from a week ago.

The Johns Hopkins University Center for Systems Science and Engineering shows the United States with 32.14 million cases and 573,044 deaths.

Globally, there have been 148.1 million cases and 3.12 million deaths.

Look inside today’s edition for the Spring Home & Garden section for tips on landscaping and home improvement this season.