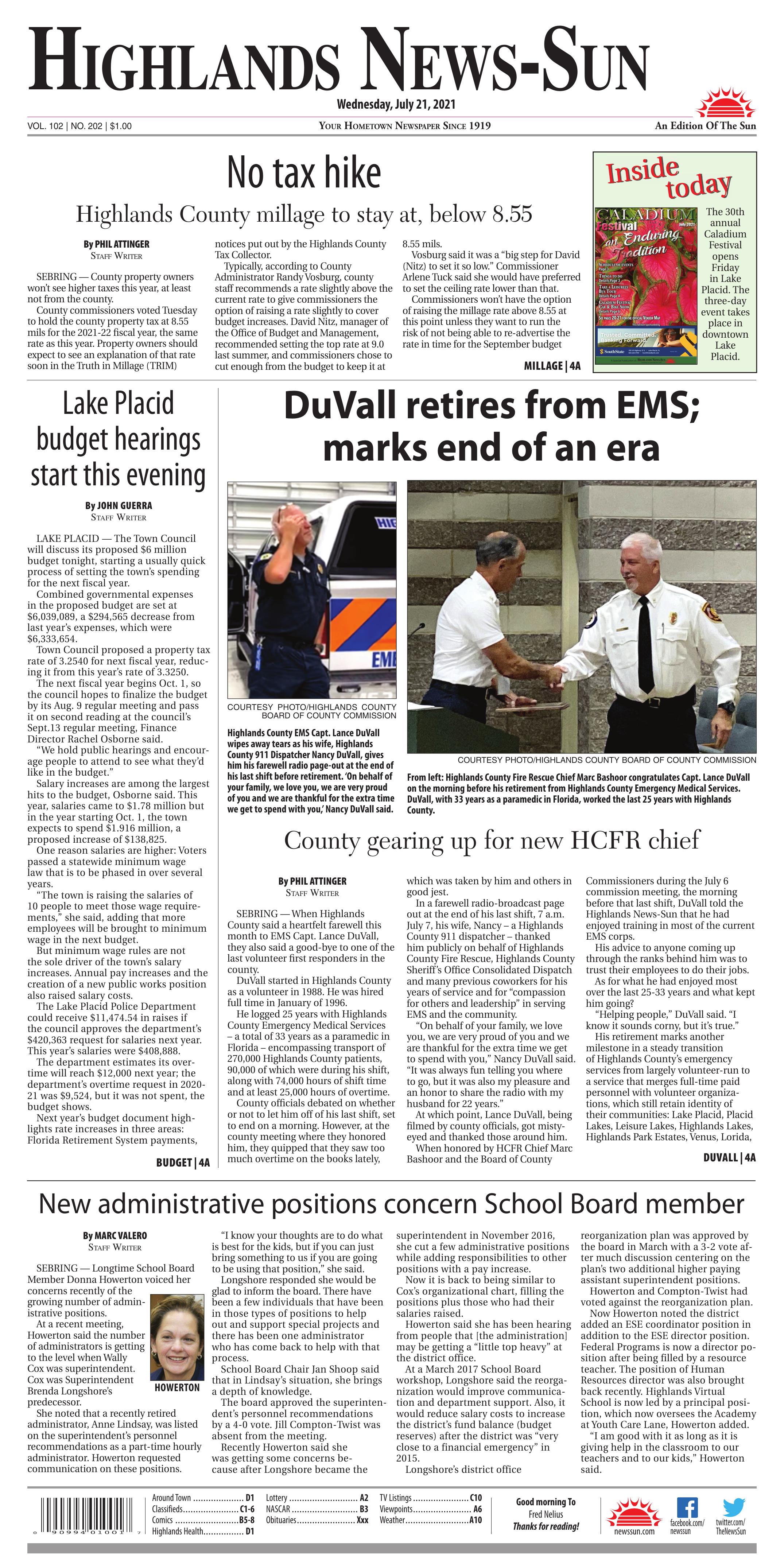 Highlands_news-sun
No tax hike: Millage to stay at, below 8.55

SEBRING — County property owners won’t see higher taxes this year, at least not from the county.

County commissioners voted Tuesday to hold the county property tax at 8.55 mils for the 2021-22 fiscal year, the same rate as this year. Property owners should expect to see an explanation of that rate soon in the Truth in Millage (TRIM) notices put out by the Highlands County Tax Collector.

Typically, according to County Administrator Randy Vosburg, county staff recommends a rate slightly above the current rate to give commissioners the option of raising a rate slightly to cover budget increases. David Nitz, manager of the Office of Budget and Management, recommended setting the top rate at 9.0 last summer, and commissioners chose to cut enough from the budget to keep it at 8.55 mils.

Vosburg said it was a “big step for David (Nitz) to set it so low.” Commissioner Arlene Tuck said she would have preferred to set the ceiling rate lower than that.

Commissioners won’t have the option of raising the millage rate above 8.55 at this point unless they want to run the risk of not being able to re-advertise the rate in time for the September budget hearings. Their options now, Vosburg and Nitz said Tuesday, are to cut spending and/or use more of the county’s fund balance to cover expected expenses.

Tuesday’s budget workshop involved payments to outside governments, constitutional officers, agencies and organizations. Nitz had asked constitutional offices to hold increases at 2.5%, but those budget average a 8.2% increase, with the largest in the Supervisor of Elections Office (36.1%), law enforcement programs paid by the commission (4.51%), the E-911 Dispatch program (11.41%) and the Highlands County Sheriff’s Office (9%).

The Sheriff’s Office is the largest dollar increase: $2.75 million. Sheriff’s Business Manager Rob Reed said most of that is personnel, while just $500,000 is capital expenditures, such as computers, vehicles and equipment. That personnel expense is not new hires, Reed said. Sheriff Paul Blackman has fully-funded positions for the first time in a while.

Reed started to assure commissioners that Blackman would make “substantial” cuts, but then corrected himself to say cuts wherever possible. County staff gave some good-natured jibes at that.

Clerk of Courts Jerome Kazubowski said his 3.97% increase is necessary equipment, especially data servers for all county departments except the Sheriff’s Office, and the staff to maintain and protect them. He said the county sees hundreds of thousands of attempts per day by outside entities to break into those servers, and he needs the staff to cover them.

As for requests from outside agencies, the county has $857,806 outlined for municipal recreations, nonprofit agencies, the Soil and Water District and the Transportation Disadvantaged program, among other things.

From Nu-Hope Elder Services, Executive Director Debbie Slade and Fiscal Director Brad Stoll told commissioners that their support of the nonprofit helps ensure that seniors — as much as 36% to 41% of the local population — can continue to live at home versus moving into expensive assisted living or care facilities.

Tiffany Collins, interim administrator for the Florida Department of Health for Highlands County, said the county’s support also helps them help seniors and all ages of residents. Bob McNeely, new executive director of the Heartland Food Reservoir, urged commissioners to continue their support of the program, which helps families directly and other local food banks.

Representatives of the Peace River Center also urged the county to continue helping them provide an emergency shelter for victims of domestic abuse, which has included men more frequently, as well as women and children.

From left: Highlands County Fire Rescue Chief Marc Bashoor congratulates Capt. Lance DuVall on the morning before his retirement from Highlands County Emergency Medical Services. DuVall, with 33 years as a paramedic in Florida, worked the last 25 years with Highlands County.

Highlands County EMS Capt. Lance DuVall wipes away tears as his wife, Highlands County 911 Dispatcher Nancy DuVall, gives him his farewell radio page-out at the end of his last shift before retirement. ‘On behalf of your family, we love you, we are very proud of you and we are thankful for the extra time we get to spend with you,’ Nancy DuVall said.

Capt. Lance DuVall, at center holding a plaque, celebrates with several colleagues from Highlands County Emergency Medical Services, many of whom he helped train. DuVall retired this month after 25 years with Highlands County EMS and 33 years as a paramedic in the state of Florida.

SEBRING — When Highlands County said a heartfelt farewell this month to EMS Capt. Lance DuVall, they also said a good-bye to one of the last volunteer first responders in the county.

DuVall started in Highlands County as a volunteer in 1988. He was hired full time in January of 1996.

He logged 25 years with Highlands County Emergency Medical Services – a total of 33 years as a paramedic in Florida – encompassing transport of 270,000 Highlands County patients, 90,000 of which were during his shift, along with 74,000 hours of shift time and at least 25,000 hours of overtime.

County officials debated on whether or not to let him off of his last shift, set to end on a morning. However, at the county meeting where they honored him, they quipped that they saw too much overtime on the books lately, which was taken by him and others in good jest.

In a farewell radio-broadcast page out at the end of his last shift, 7 a.m. July 7, his wife, Nancy – a Highlands County 911 dispatcher – thanked him publicly on behalf of Highlands County Fire Rescue, Highlands County Sheriff’s Office Consolidated Dispatch and many previous coworkers for his years of service and for “compassion for others and leadership” in serving EMS and the community.

“On behalf of your family, we love you, we are very proud of you and we are thankful for the extra time we get to spend with you,” Nancy DuVall said. “It was always fun telling you where to go, but it was also my pleasure and an honor to share the radio with my husband for 22 years.”

At which point, Lance DuVall, being filmed by county officials, got misty-eyed and thanked those around him.

When honored by HCFR Chief Marc Bashoor and the Board of County Commissioners during the July 6 commission meeting, the morning before that last shift, DuVall told the Highlands News-Sun that he had enjoyed training in most of the current EMS corps.

His advice to anyone coming up through the ranks behind him was to trust their employees to do their jobs.

As for what he had enjoyed most over the last 25-33 years and what kept him going?

Highlands County doesn’t have volunteer EMS personnel these days, although HCFR still relies heavily on volunteer fire crews to supplement a growing number of full-time paid firefighters, who have increased the ranks and helped lower response times during peak hours.

In the last three years, the county’s newly-imposed countywide fire assessment has brought in more personnel, apparatus and funds to begin building new fire stations to house crews on all shifts.

At a recent meeting, Howerton said the number of administrators is getting to the level when Wally Cox was superintendent. Cox was Superintendent Brenda Longshore’s predecessor.

She noted that a recently retired administrator, Anne Lindsay, was listed on the superintendent’s personnel recommendations as a part-time hourly administrator. Howerton requested communication on these positions.

“I know your thoughts are to do what is best for the kids, but if you can just bring something to us if you are going to be using that position,” she said.

Longshore responded she would be glad to inform the board. There have been a few individuals that have been in those types of positions to help out and support special projects and there has been one administrator who has come back to help with that process.

School Board Chair Jan Shoop said that in Lindsay’s situation, she brings a depth of knowledge.

The board approved the superintendent’s personnel recommendations by a 4-0 vote. Jill Compton-Twist was absent from the meeting.

Recently Howerton said she was getting some concerns because after Longshore became the superintendent in November 2016, she cut a few administrative positions while adding responsibilities to other positions with a pay increase.

Now it is back to being similar to Cox’s organizational chart, filling the positions plus those who had their salaries raised.

Howerton said she has been hearing from people that [the administration] may be getting a “little top heavy” at the district office.

At a March 2017 School Board workshop, Longshore said the reorganization would improve communication and department support. Also, it would reduce salary costs to increase the district’s fund balance (budget reserves) after the district was “very close to a financial emergency” in 2015.

Longshore’s district office reorganization plan was approved by the board in March with a 3-2 vote after much discussion centering on the plan’s two additional higher paying assistant superintendent positions.

Howerton and Compton-Twist had voted against the reorganization plan.

Now Howerton noted the district added an ESE coordinator position in addition to the ESE director position. Federal Programs is now a director position after being filled by a resource teacher. The position of Human Resources director was also brought back recently. Highlands Virtual School is now led by a principal position, which now oversees the Academy at Youth Care Lane, Howerton added.

“I am good with it as long as it is giving help in the classroom to our teachers and to our kids,” Howerton said.

LAKE PLACID — The Town Council will discuss its proposed $6 million budget tonight, starting a usually quick process of setting the town’s spending for the next fiscal year.

Town Council proposed a property tax rate of 3.2540 for next fiscal year, reducing it from this year’s rate of 3.3250.

The next fiscal year begins Oct. 1, so the council hopes to finalize the budget by its Aug. 9 regular meeting and pass it on second reading at the council’s Sept.13 regular meeting, Finance Director Rachel Osborne said.

“We hold public hearings and encourage people to attend to see what they’d like in the budget.”

Salary increases are among the largest hits to the budget, Osborne said. This year, salaries came to $1.78 million but in the year starting Oct. 1, the town expects to spend $1.916 million, a proposed increase of $138,825.

One reason salaries are higher: Voters passed a statewide minimum wage law that is to be phased in over several years.

“The town is raising the salaries of 10 people to meet those wage requirements,” she said, adding that more employees will be brought to minimum wage in the next budget.

But minimum wage rules are not the sole driver of the town’s salary increases. Annual pay increases and the creation of a new public works position also raised salary costs.

There is good news in other insurance premiums, however. For instance, administrative health-life insurance costs are expected to decrease by $4,621, the proposed budget shows.