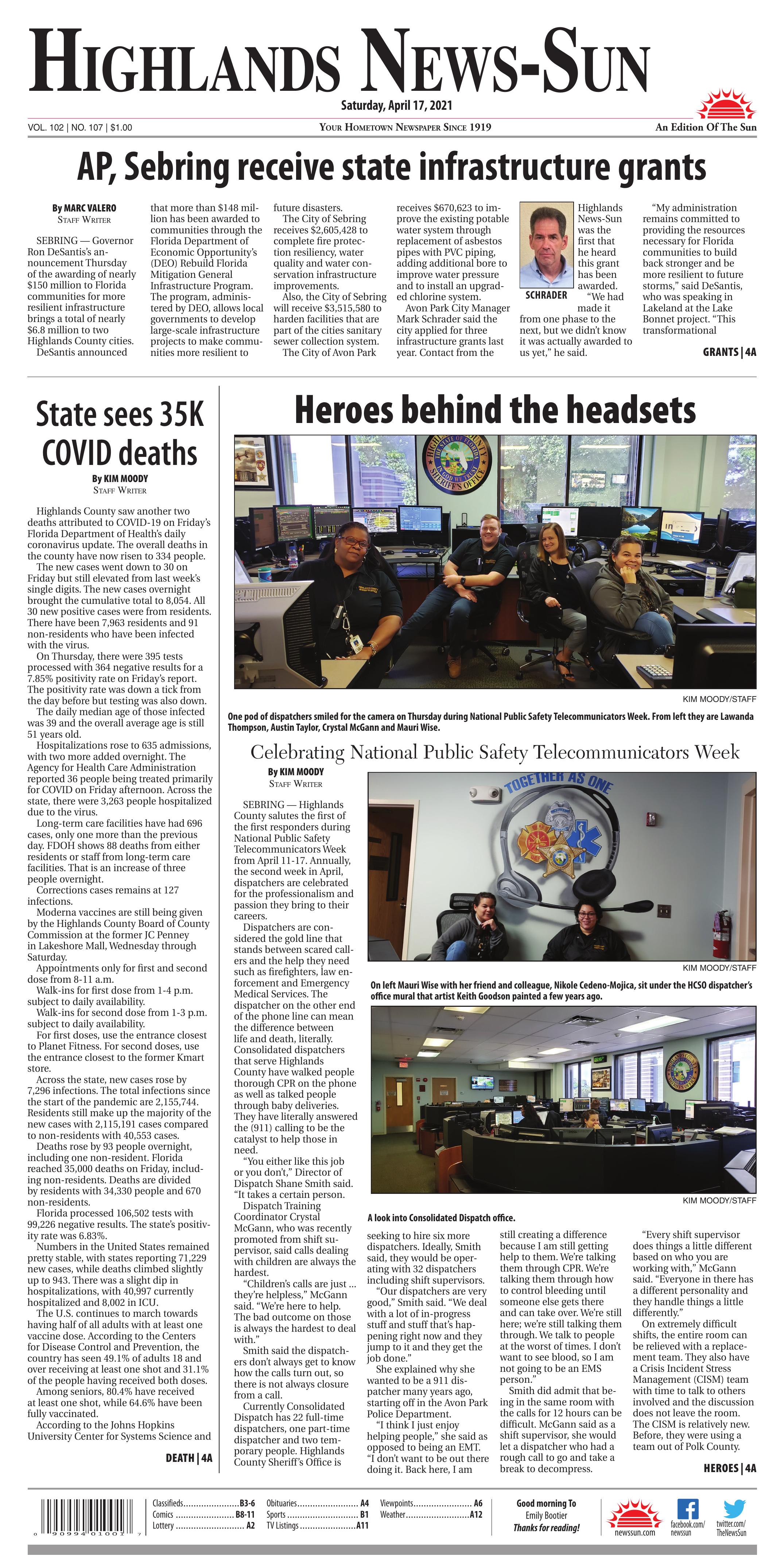 Also, the City of Sebring will receive $3,515,580 to harden facilities that are part of the cities sanitary sewer collection system.

The City of Avon Park receives $670,623 to improve the existing potable water system through replacement of asbestos pipes with PVC piping, adding additional bore to improve water pressure and to install an upgraded chlorine system.

Avon Park City Manager Mark Schrader said the city applied for three infrastructure grants last year. Contact from the Highlands News-Sun was the first that he heard this grant has been awarded.

“We had made it from one phase to the next, but we didn’t know it was actually awarded to us yet,” he said.

“My administration remains committed to providing the resources necessary for Florida communities to build back stronger and be more resilient to future storms,” said DeSantis, who was speaking in Lakeland at the Lake Bonnet project. “This transformational mitigation funding will go a long way in helping Florida’s communities invest in their futures through critical infrastructure improvements.”

The funds are allocated to the state through the U.S. Department of Housing and Urban Development’s (HUD) Community Development Block Grant – Mitigation (CDBG-MIT) program formed in response to the 2016 to 2017 presidentially declared disasters.

With a total allocation of $475 million, the Rebuild Florida Mitigation General Infrastructure Program will provide two additional rounds of funding in the future to communities designated by HUD or the state as Most Impacted and Distressed (MID) by Hurricanes Hermine, Matthew and Irma.

Northern Highlands County (Avon Park and Sebring) are part of the HUD-Designated MID Areas for 2016-2017 storms.

One pod of dispatchers smiled for the camera on Thursday during National Public Safety Telecommunicators Week. From left they are Lawanda Thompson, Austin Taylor, Crystal McGann and Mauri Wise.

On left Mauri Wise with her friend and colleague, Nikole Cedeno-Mojica, sit under the HCSO dispatcher’s office mural that artist Keith Goodson painted a few years ago.

A look into Consolidated Dispatch office.

Director of Dispatch Shane Smith is standing beside her flag made by Lake Placid Police Chief James Fansler after she was promoted in January.

SEBRING — Highlands County salutes the first of the first responders during National Public Safety Telecommunicators Week from April 11-17. Annually, the second week in April, dispatchers are celebrated for the professionalism and passion they bring to their careers.

Dispatchers are considered the gold line that stands between scared callers and the help they need such as firefighters, law enforcement and Emergency Medical Services. The dispatcher on the other end of the phone line can mean the difference between life and death, literally. Consolidated dispatchers that serve Highlands County have walked people thorough CPR on the phone as well as talked people through baby deliveries. They have literally answered the (911) calling to be the catalyst to help those in need.

“You either like this job or you don’t,” Director of Dispatch Shane Smith said. “It takes a certain person.

“Children’s calls are just ... they’re helpless,” McGann said. “We’re here to help. The bad outcome on those is always the hardest to deal with.”

Smith said the dispatchers don’t always get to know how the calls turn out, so there is not always closure from a call.

“Our dispatchers are very good,” Smith said. “We deal with a lot of in-progress stuff and stuff that’s happening right now and they jump to it and they get the job done.”

She explained why she wanted to be a 911 dispatcher many years ago, starting off in the Avon Park Police Department.

Smith did admit that being in the same room with the calls for 12 hours can be difficult. McGann said as a shift supervisor, she would let a dispatcher who had a rough call to go and take a break to decompress.

On extremely difficult shifts, the entire room can be relieved with a replacement team. They also have a Crisis Incident Stress Management (CISM) team with time to talk to others involved and the discussion does not leave the room. The CISM is relatively new. Before, they were using a team out of Polk County. The Employee Assistance Program also allows employees to confidentially speak to professionals. The HCSO chaplains are another good resource for the dispatchers when needed.

McGann said a few of the dispatchers have saved lives. Many have been with the job for 15 years or more, with a few over 30 years, who will retire within two years. The dispatchers are under HCSO’s Captain John Barinas.

Nikole Cedeno-Mojica is a newbie in the group with over a year on the thin gold line. After some disappointing jobs, her mom saw the advertisement and she decided to go for the job. She loves her job, especially the phone and radio while piecing together what is happening on the other end.

Falicia Roth will be retiring soon after being with the Avon Park Police Department for 21 years and 12-and-a-half years with Consolidated.

“My favorite part is the radio and listening to everyone talk,” she said. “I will miss the friendships that I have made here. We are like a family.”

Roth said she learned the bad calls of the day had to be left at the office and learn to relax once she was home.

Smith said most people find out within the first six months if they are meant for the job. She said those seeking a career in dispatch should have a calm demeanor and the ability to multitask is “an absolute must” to be able to keep up with five computer screens that include a 911 system, radio system and computer aided dispatcher (CAD) and answering 911 phone calls.

“Dispatchers often have to deal with people who are having the worst day of their life and they do everything they can to help that person in any way possible,” Sheriff Paul Blackman said. “Their roles go far beyond just answering the phone and sending help. They save lives with just their words. They can give CPR instructions, help someone deliver a baby and be the caring voice that prevents someone from taking their own life. They then have to move on to the next call, which can be another life in crisis or a complaint about a barking dog. They never know what is on the other end of that phone call when they answer, but they have to be prepared to deal with whatever it is in a calm and professional manner. They also rarely get closure on the calls they have to deal with, because they have to move on to the next call immediately and give it their full attention.

“Despite that, most dispatchers will tell you it is a very rewarding job. Our dispatchers are the first of the first responders and their importance can’t be measured. We are lucky to have them.”

Highlands County saw another two deaths attributed to COVID-19 on Friday’s Florida Department of Health’s daily coronavirus update. The overall deaths in the county have now risen to 334 people.

The new cases went down to 30 on Friday but still elevated from last week’s single digits. The new cases overnight brought the cumulative total to 8,054. All 30 new positive cases were from residents. There have been 7,963 residents and 91 non-residents who have been infected with the virus.

On Thursday, there were 395 tests processed with 364 negative results for a 7.85% positivity rate on Friday’s report. The positivity rate was down a tick from the day before but testing was also down.

The daily median age of those infected was 39 and the overall average age is still 51 years old.

Hospitalizations rose to 635 admissions, with two more added overnight. The Agency for Health Care Administration reported 36 people being treated primarily for COVID on Friday afternoon. Across the state, there were 3,263 people hospitalized due to the virus.

Moderna vaccines are still being given by the Highlands County Board of County Commission at the former JC Penney in Lakeshore Mall, Wednesday through Saturday.

Appointments only for first and second dose from 8-11 a.m.

Walk-ins for first dose from 1-4 p.m. subject to daily availability.

Walk-ins for second dose from 1-3 p.m. subject to daily availability.

Across the state, new cases rose by 7,296 infections. The total infections since the start of the pandemic are 2,155,744. Residents still make up the majority of the new cases with 2,115,191 cases compared to non-residents with 40,553 cases.

Numbers in the United States remained pretty stable, with states reporting 71,229 new cases, while deaths climbed slightly up to 943. There was a slight dip in hospitalizations, with 40,997 currently hospitalized and 8,002 in ICU.

The U.S. continues to march towards having half of all adults with at least one vaccine dose. According to the Centers for Disease Control and Prevention, the country has seen 49.1% of adults 18 and over receiving at least one shot and 31.1% of the people having received both doses.

Among seniors, 80.4% have received at least one shot, while 64.6% have been fully vaccinated.

According to the Johns Hopkins University Center for Systems Science and Engineering, the United States has seen a total of 31.5 million cases and had 565,764 deaths.

Globally, there have been 139.4 million cases and deaths are closing in on the 3 million mark, with 2.99 million deaths reported.