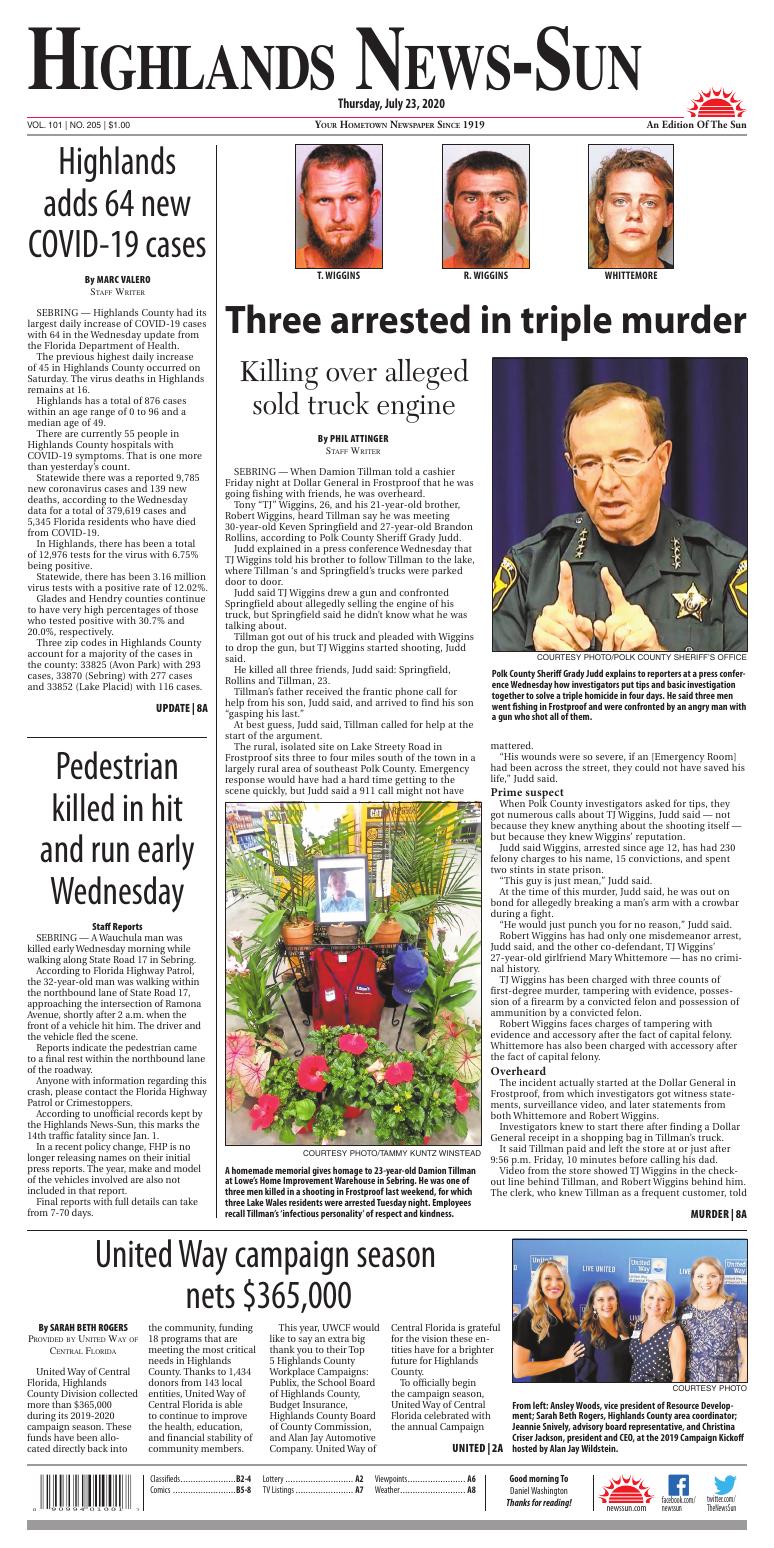 A homemade memorial gives homage to 23-year-old Damion Tillman at Lowe’s Home Improvement Warehouse in Sebring. He was one of three men killed in a shooting in Frostproof last weekend, for which three Lake Wales residents were arrested Tuesday night. Employees recall Tillman’s ‘infectious personality’ of respect and kindness.

Polk County Sheriff Grady Judd explains to reporters at a press conference Wednesday how investigators put tips and basic investigation together to solve a triple homicide in four days. He said three men went fishing in Frostproof and were confronted by an angry man with a gun who shot all of them.

SEBRING — When Damion Tillman told a cashier Friday night at Dollar General in Frostproof that he was going fishing with friends, he was overheard.

Judd explained in a press conference Wednesday that TJ Wiggins told his brother to follow Tillman to the lake, where Tillman ‘s and Springfield’s trucks were parked door to door.

Judd said TJ Wiggins drew a gun and confronted Springfield about allegedly selling the engine of his truck, but Springfield said he didn’t know what he was talking about.

Tillman got out of his truck and pleaded with Wiggins to drop the gun, but TJ Wiggins started shooting, Judd said.

Rollin’s father received the frantic phone call for help from his son, Judd said, and arrived to find his son “gasping his last.”

At best guess, Judd said, Rollins called for help at the start of the argument.

The rural, isolated site on Lake Streety Road in Frostproof sits three to four miles south of the town in a largely rural area of southeast Polk County. Emergency response would have had a hard time getting to the scene quickly, but Judd said a 911 call might not have mattered.

“His wounds were so severe, if an [Emergency Room] had been across the street, they could not have saved his life,” Judd said.

Judd said Wiggins, arrested since age 12, has had 230 felony charges to his name, 15 convictions, and spent two stints in state prison.

At the time of this murder, Judd said, he was out on bond for allegedly breaking a man’s arm with a crowbar during a fight.

“He would just punch you for no reason,” Judd said.

Robert Wiggins has had only one misdemeanor arrest, Judd said, and the other co-defendant, TJ Wiggins’ 27-year-old girlfriend Mary Whittemore — has no criminal history.

The incident actually started at the Dollar General in Frostproof, from which investigators got witness statements, surveillance video, and later statements from both Whittemore and Robert Wiggins.

Investigators knew to start there after finding a Dollar General receipt in a shopping bag in Tillman’s truck.

It said Tillman paid and left the store at or just after 9:56 p.m. Friday, 10 minutes before calling his dad.

Video from the store showed TJ Wiggins in the checkout line behind Tillman, and Robert Wiggins behind him. The clerk, who knew Tillman as a frequent customer, told detectives that Tillman said he was going fishing.

The clerk also saw the suspects in the store at the same time, Judd said, and they were also caught on video. The clerk told detectives that the suspects had heard Tillman say he was going fishing, and that Keven would be with him, and were talking to each other about it.

Given the tips they received, detectives spoke with the brothers and girlfriend on Monday at a mobile home off-grid compound in a wooded area near Lake Wales. While there, they found two SKS rifles, two Mossberg shotguns, and ammunition for both in a gun safe belonging to TJ Wiggins.

Given his felony convictions, he was arrested on weapons possession charges, and held without bond because he had violated bond conditions on the aggravated assault charge.

Deputies then obtained and served a search warrant and found ammunition that the Florida Department of Law Enforcement crime lab matched to shell casings from the murder scene, fired from a Smith & Wesson handgun.

From interviews, detectives learned that Whittemore purchased the ammunition for TJ Wiggins on July 9 in Lake Wales. Store video surveillance recorded the purchase and detectives have the receipt, a Polk Sheriff’s Office press release stated.

Detectives interviewed all three suspects, and their stories were inconsistent and contradicting each other. Whittemore admitted to purchasing the ammunition, and to being with the brothers on the night of the murder. She did not make any additional statements. The Wiggins brothers statements were inconsistent.

Judd said Robert Wiggins admitted to seeing Tillman Friday night while in line at the Dollar General store and that his brother told him to follow Tillman’s and Springfield’s trucks.

When they caught up to them, Robert Wiggins stayed in the truck with Whittemore, Judd said, while TJ Wiggins got out with a gun drawn and accused Springfield of selling the engine out of his truck, punching him and yelling at him.

Detectives found no evidence of any other motive in the killing, Judd said.

Judd said Rollins and Tillman got out of their seats while TJ Wiggins kept screaming at all of them. Robert Wiggins told detectives “it was all over,” Judd said, as he watched his brother shoot all three victims.

TJ Wiggins then had him help put Tillman into the bed of one of the trucks.

After that, all three left for an undisclosed location, Judd said, stripped and threw away the gun, and then drove to McDonald’s in Lake Wales, where they ordered 10 double cheeseburgers and two McChicken sandwiches.

This was the one detail of all three suspects’ stories that matched, Judd said.

They went home to eat, the press release states, then on Saturday morning, Robert Wiggins, having borrowed their truck from a relative, took it to a car wash in Lake Wales to spray the clay off of it.

Deputies found traces of blood on the seat that matched the crime scene.

Neither TJ Wiggins nor Whittemore are cooperating with detectives, he said.

Tammy Winstead, customer service associate at the store, posted a photograph of a store-based memorial for the man who had an infectious personality, she said: Polite, respectful and kind.

“There was nobody in here that he didn’t talk to,” Winstead said. “He talked to everybody.”

Judd expressed great gratitude for people who gave tips to investigators, and praised his detectives for solving the case in four days.

Judd said people have reached out from as far away as Tennessee with offers to increase reward money. What’s needed more, he said, is help for the families with funeral expenses.

Lowe’s has an employee relief fund, Winstead said, and coworkers have put the family in touch with that program, as well as raised money among coworkers.

“One of his main jobs here was to go out and get carts. He was always the one who would go out in the rain,” Winstead said. “This kind of thing just breaks my heart, because he was such a likable young man.”

Editor's note: This story has been corrected since its publication to reflect that Brandon Rollins was the man who called his father for help. We regret any confusion that may have caused.

This couple holds up celebratory hands as they cross the finish line at the Parkway 5K.

The ribbon cutting ceremony at Panther 5k on the Parkway.

United Way of Central Florida, Highlands County Division collected more than $365,000 during its 2019-2020 campaign season. These funds have been allocated directly back into the community, funding 18 programs that are meeting the most critical needs in Highlands County. Thanks to 1,434 donors from 143 local entities, United Way of Central Florida is able to continue to improve the health, education, and financial stability of community members.

This year, UWCF would like to say an extra big thank you to their Top 5 Highlands County Workplace Campaigns: Publix, the School Board of Highlands County, Budget Insurance, Highlands County Board of County Commission, and Alan Jay Automotive Company. United Way of Central Florida is grateful for the vision these entities have for a brighter future for Highlands County.

To officially begin the campaign season, United Way of Central Florida celebrated with the annual Campaign Kickoff hosted by Alan Jay Wildstein. Thank you to Alan for graciously opening your home yet again for this celebration. At the kickoff, UWCF celebrated local partners such as Heacock Insurance, Town of Lake Placid, and Peace River Center, as they set the tone for the campaign season, being named the 2019 Highlands County pacesetters.

The 2020 annual Bayou Bash was hosted again by the gracious Wohl Family at Rafter T Ranch. This night celebrated the leadership givers (annual donors of $1,000 and up) and new friends with Cajun food, live music, and a short presentation on what it means to “LIVE UNITED.”

A favorite new event this year was 5k on the Parkway. Thanks to the Board of County Commission, United Way of Central Florida benefitted from this event. Over 200 participants completed the race as the first of the public to utilize the Panther Parkway, celebrating its grand opening. Thanks to the hard work of Gloria Rybinski, Randy Vosburg, their team, and generous sponsors, the fundraiser raised over $7,000.

The 2019-2020 campaign season sunset a month early due to the COVID-19 pandemic, however, United Way of Central Florida did not stop working.

Out of the pandemic came the United Community Relief Fund, a partnership with the GiveWell Community Foundation, designed to aid local agencies in their COVID-19 relief efforts. Funding from this source, along with gifts from private donors, provided an extra $50,000 to agencies in Highlands County providing childcare for essential workers and emergency assistance for basic needs. United Way of Central Florida – in partnership with SunLand Distribution, Hardee Fresh, Central Florida Healthcare, and Bountiful Blessings Church of God – also provided over 900 families with supplemental meat and produce through three food distribution sites, in the wake of the pandemic.

United Way of Central Florida wrapped up the 2019-2020 year with the Community Investment Team process. Through this process, a group of community volunteers spends time reviewing applications, performing site visits, and ultimately allocates the UWCF funds. Though this year this process looked different being completed virtually, each United Way of Central Florida partner agency was thoroughly vetted for each funded program. Thanks to the hard work of the CIT volunteers, campaign dollars were successfully allocated to 18 different programs in Highlands County that produce positive, measurable, and sustainable impact.

A closer look at the positive cases of coronavirus in Highlands County as of Wednesday’s report.

SEBRING — Highlands County had its largest daily increase of COVID-19 cases with 64 in the Wednesday update from the Florida Department of Health.

The previous highest daily increase of 45 in Highlands County occurred on Saturday. The virus deaths in Highlands remains at 16.

There are currently 55 people in Highlands County hospitals with COVID-19 symptoms. That is one more than yesterday’s count.

Statewide there was a reported 9,785 new coronavirus cases and 139 new deaths, according to the Wednesday data for a total of 379,619 cases and 5,345 Florida residents who have died from COVID-19.

Glades and Hendry counties continue to have very high percentages of those who tested positive with 30.7% and 20.0%, respectively.

SEBRING — A Wauchula man was killed early Wednesday morning while walking along State Road 17 in Sebring.

According to Florida Highway Patrol, the 32-year-old man was walking within the northbound lane of State Road 17, approaching the intersection of Ramona Avenue, shortly after 2 a.m. when the front of a vehicle hit him. The driver and the vehicle fled the scene.

Reports indicate the pedestrian came to a final rest within the northbound lane of the roadway.

Anyone with information regarding this crash, please contact the Florida Highway Patrol or Crimestoppers.

According to unofficial records kept by the Highlands News-Sun, this marks the 14th traffic fatality since Jan. 1.

In a recent policy change, FHP is no longer releasing names on their initial press reports. The year, make and model of the vehicles involved are also not included in that report.

Final reports with full details can take from 7-70 days. 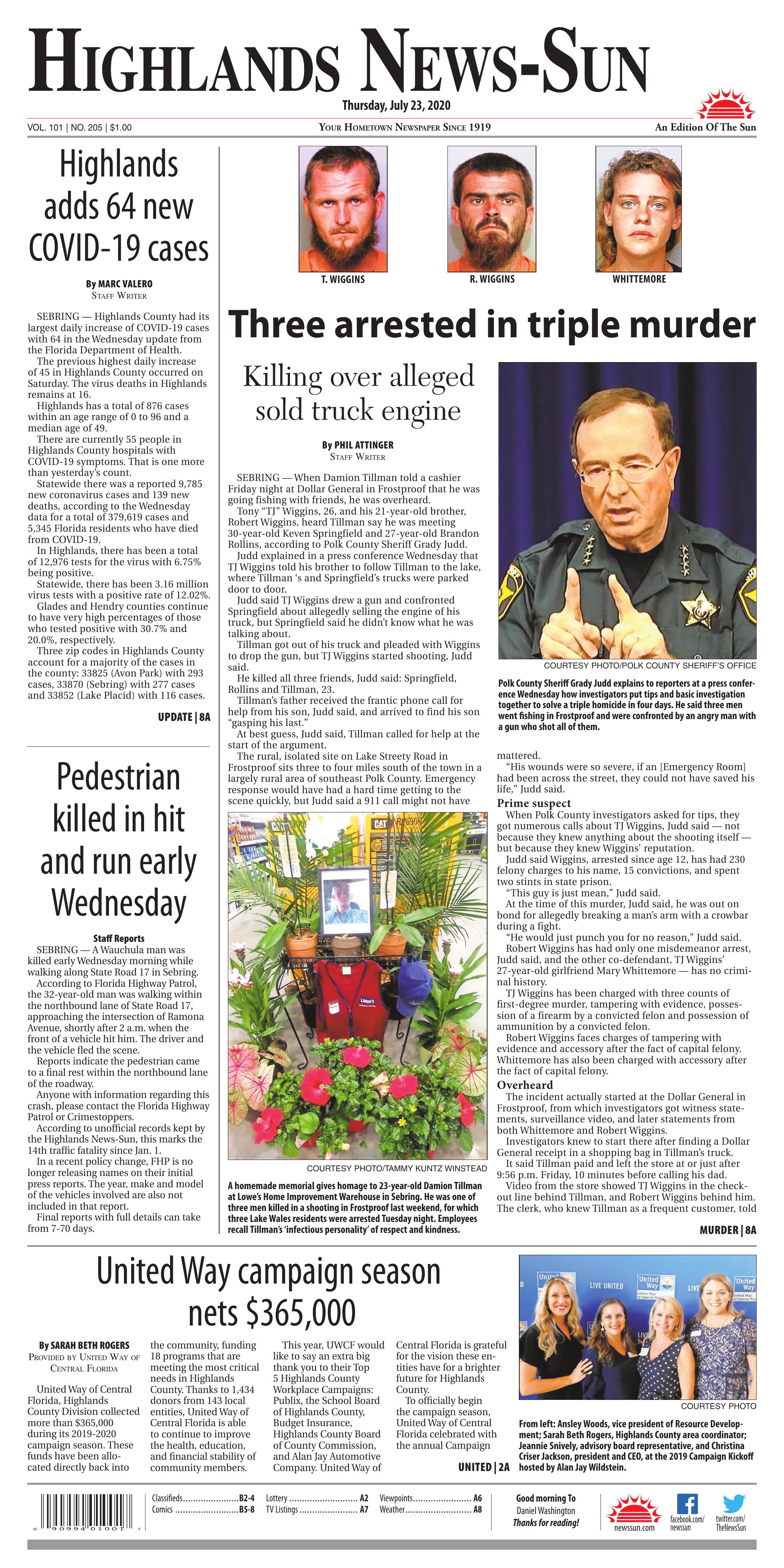