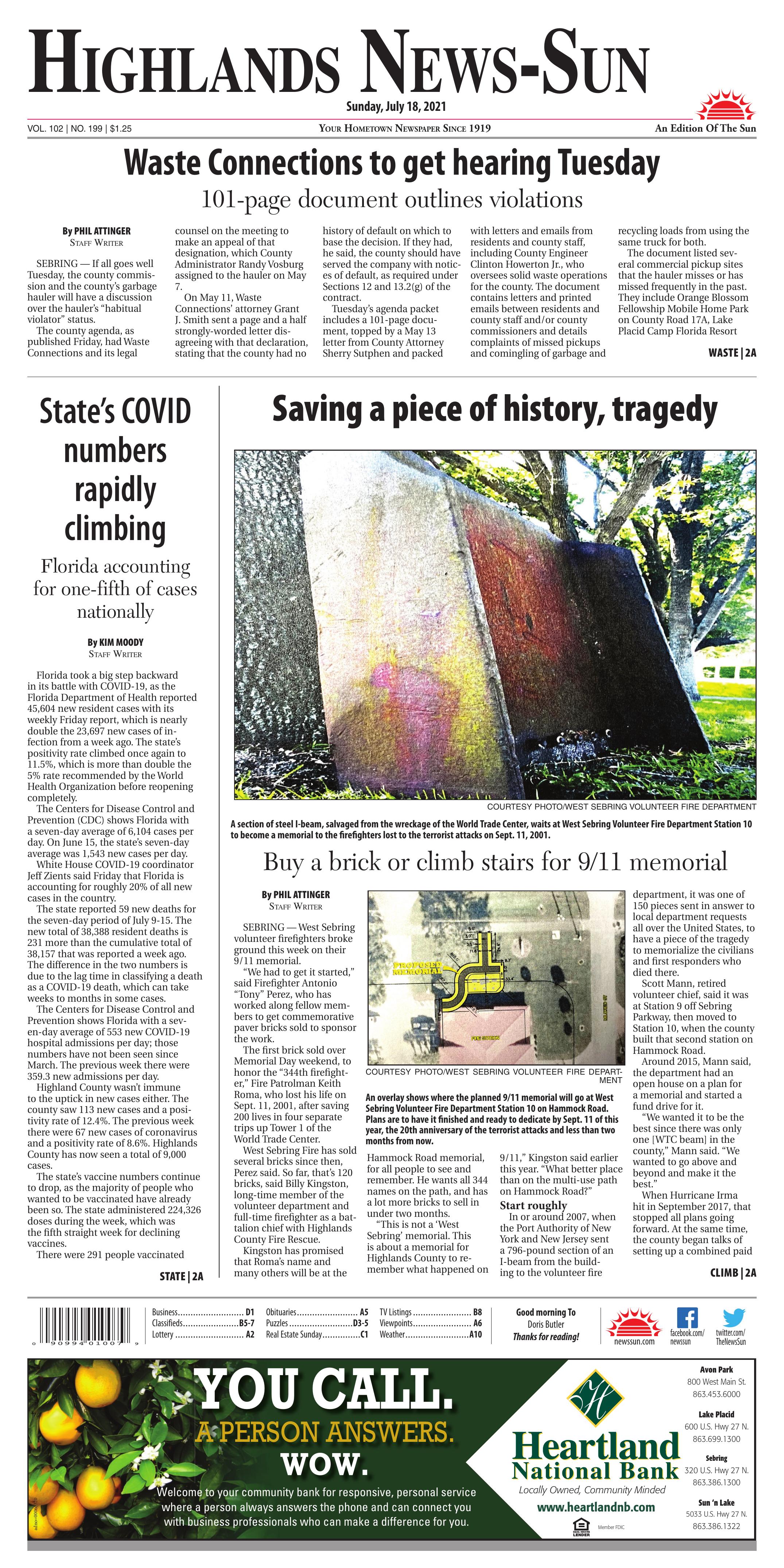 Highlands_news-sun
Hauler to get hearing Tuesday

SEBRING — If all goes well Tuesday, the county commission and the county’s garbage hauler will have a discussion over the hauler’s “habitual violator” status.

The county agenda, as published Friday, had Waste Connections and its legal counsel on the meeting to make an appeal of that designation, which County Administrator Randy Vosburg assigned to the hauler on May 7.

On May 11, Waste Connections’ attorney Grant J. Smith sent a page and a half strongly-worded letter disagreeing with that declaration, stating that the county had no history of default on which to base the decision. If they had, he said, the county should have served the company with notices of default, as required under Sections 12 and 13.2(g) of the contract.

Tuesday’s agenda packet includes a 101-page document, topped by a May 13 letter from County Attorney Sherry Sutphen and packed with letters and emails from residents and county staff, including County Engineer Clinton Howerton Jr., who oversees solid waste operations for the county. The document contains letters and printed emails between residents and county staff and/or county commissioners and details complaints of missed pickups and comingling of garbage and recycling loads from using the same truck for both.

In addition, the emails, letters and documents speak to problems with customer complaints not getting resolved within the 72-hour (three day) deadline imposed by the contract.

A section of steel I-beam, salvaged from the wreckage of the World Trade Center, waits at West Sebring Volunteer Fire Department Station 10 to become a memorial to the firefighters lost to the terrorist attacks on Sept. 11, 2001.

An overlay shows where the planned 9/11 memorial will go at West Sebring Volunteer Fire Department Station 10 on Hammock Road. Plans are to have it finished and ready to dedicate by Sept. 11 of this year, the 20th anniversary of the terrorist attacks and less than two months from now.

An architect’s drafting of the planned 9/11 memorial on Hammock Road shows a brick-paver path around the memorial that will incorporate a 796-pound piece of steel from the World Trade Center. West Sebring Volunteer Fire Department, who will have the memorial at their Fire Station 10, has bricks for sale at www.bricksrus.com/order/westsebring/.

Ground sits prepared at West Sebring Volunteer Fire Department Station 10 to receive bricks and the foundation of a memorial to the 344 firefighters who died in the 2001 terrorist attack on the World Trade Center. The fire department has had a piece of steel from the World Trade Center for many years, and is raising money to pay for the memorial, planned for dedication on Sept. 11 this year.

“We had to get it started,” said Firefighter Antonio “Tony” Perez, who has worked along fellow members to get commemorative paver bricks sold to sponsor the work.

The first brick sold over Memorial Day weekend, to honor the “344th firefighter,” Fire Patrolman Keith Roma, who lost his life on Sept. 11, 2001, after saving 200 lives in four separate trips up Tower 1 of the World Trade Center.

Kingston has promised that Roma’s name and many others will be at the Hammock Road memorial, for all people to see and remember. He wants all 344 names on the path, and has a lot more bricks to sell in under two months.

“This is not a ‘West Sebring’ memorial. This is about a memorial for Highlands County to remember what happened on 9/11,” Kingston said earlier this year. “What better place than on the multi-use path on Hammock Road?”

Start roughlyIn or around 2007, when the Port Authority of New York and New Jersey sent a 796-pound section of an I-beam from the building to the volunteer fire department, it was one of 150 pieces sent in answer to local department requests all over the United States, to have a piece of the tragedy to memorialize the civilians and first responders who died there.

Scott Mann, retired volunteer chief, said it was at Station 9 off Sebring Parkway, then moved to Station 10, when the county built that second station on Hammock Road.

Around 2015, Mann said, the department had an open house on a plan for a memorial and started a fund drive for it.

“We wanted it to be the best since there was only one [WTC beam] in the county,” Mann said. “We wanted to go above and beyond and make it the best.”

When Hurricane Irma hit in September 2017, that stopped all plans going forward. At the same time, the county began talks of setting up a combined paid and volunteer fire service, which took place in 2018.

West Sebring Fire continued collecting funds for a memorial, but basically, everything was put on hold, Mann said.

Move forwardMann retired in June 2019. Chief Joe Romanik took over, and the effort gained traction again last year after David Hawkey, retired from Highlands County Emergency Medical Services, posted on social media that he wanted to see something done with the I-beam, which had sat rusting under an oak at station 10 before being moved to a carport next to a barbecue grill, a picnic table and a couple of broken recliners.

Hawkey told the Highlands News-Sun that a man came to the door of the station one day, asking about the I-beam, and got tears in his eyes, telling how he lost two cousins in the attack. For years after that, Hawkey said, on every Sept. 11, people would leave yellow roses by the beam or by the tree. One man would stop at the station on his daily walk on Hammock Road Trail multi-use path to bow his head and pray, Hawkey said.

After much discussion of where to put the memorial, with concerns raised about a lack of parking at Station 10, the fire station became the final site. As planned, the memorial will stand in full view of Hammock Road Trail with a brick pathway leading to it, including as many names of fallen firefighters that West Sebring Fire can sell.

Climb higherKingston suggests, in addition to attending the dedication, people also take part earlier that morning in the Fallen Firefighters Stair Climb at Sebring International Raceway, to commemorate the 110 flights of stairs firefighters scaled to get up into the twin towers on the fateful day.

People can sign up for the stair climb at $35 per person by contacting West Sebring Fire at 863-386-6052. They can purchase a brick, at various sponsorship levels, by visiting www.bricksrus.com/order/westsebring/.

Each West Sebring member has a goal of selling 20 bricks each.

“We’ve got a pretty good response, so far,” Kingston said, including a sponsor who has offered to lay the bricks at no cost. “We’ve got a couple more in the pipe that we’re looking at and still looking for more.”

Florida took a big step backward in its battle with COVID-19, as the Florida Department of Health reported 45,604 new resident cases with its weekly Friday report, which is nearly double the 23,697 new cases of infection from a week ago. The state’s positivity rate climbed once again to 11.5%, which is more than double the 5% rate recommended by the World Health Organization before reopening completely.

White House COVID-19 coordinator Jeff Zients said Friday that Florida is accounting for roughly 20% of all new cases in the country.

The state reported 59 new deaths for the seven-day period of July 9-15. The new total of 38,388 resident deaths is 231 more than the cumulative total of 38,157 that was reported a week ago. The difference in the two numbers is due to the lag time in classifying a death as a COVID-19 death, which can take weeks to months in some cases.

The Centers for Disease Control and Prevention shows Florida with a seven-day average of 553 new COVID-19 hospital admissions per day; those numbers have not been seen since March. The previous week there were 359.3 new admissions per day.

The state’s vaccine numbers continue to drop, as the majority of people who wanted to be vaccinated have already been so. The state administered 224,326 doses during the week, which was the fifth straight week for declining vaccines.

Nationally, vaccinations did increase slightly. The seven-day average for vaccines climbed to 519,678, which is 12,000 higher than was reported a week ago. There have been a total of 337 million doses given in the country and 55.9% of the population has received at least one dose.

Globally, there have been 189.7 million cases and 4.08 million deaths.