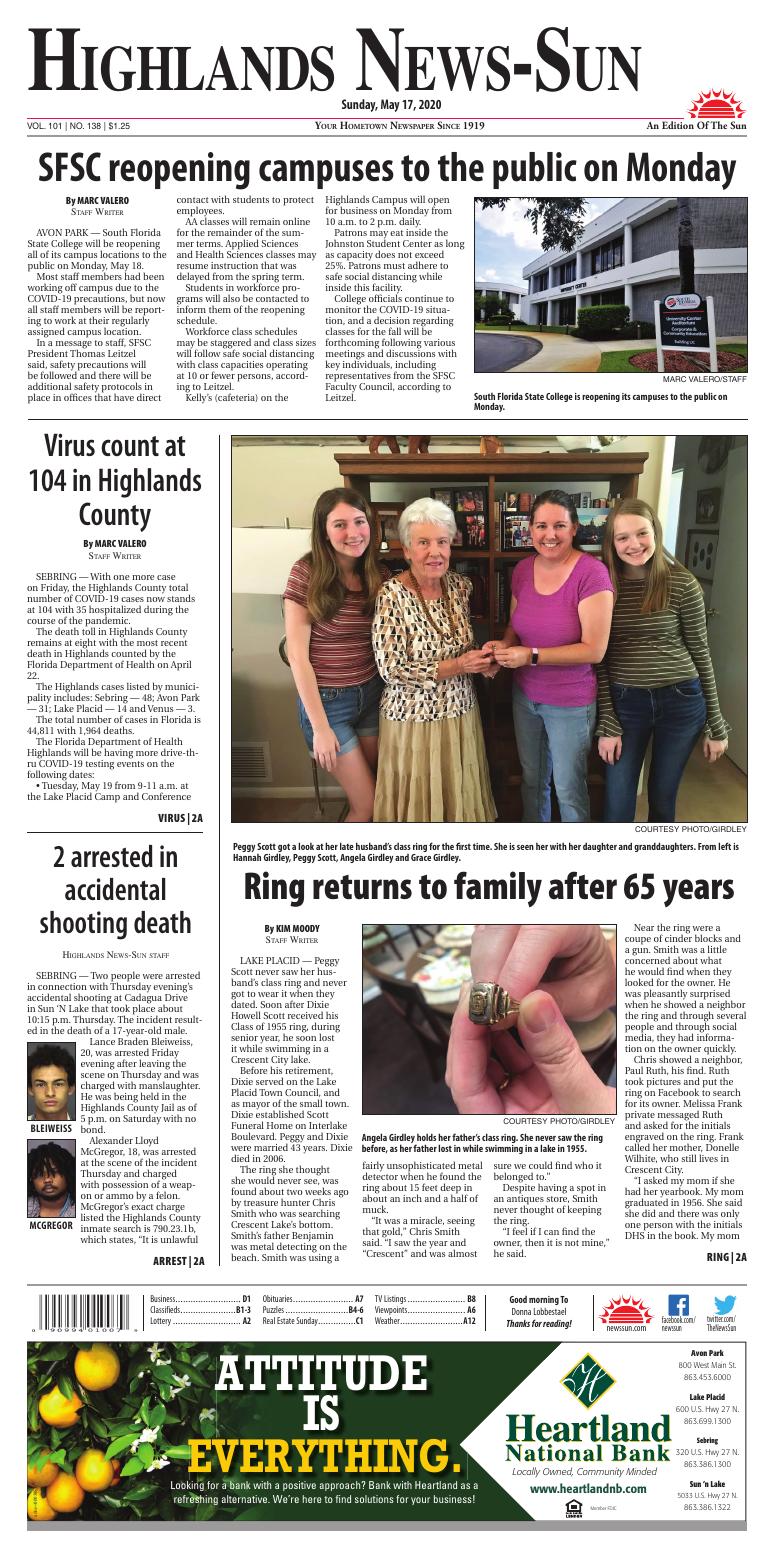 South Florida State College is reopening its campuses to the public on Monday.

AVON PARK — South Florida State College will be reopening all of its campus locations to the public on Monday, May 18.

Most staff members had been working off campus due to the COVID-19 precautions, but now all staff members will be reporting to work at their regularly assigned campus location.

In a message to staff, SFSC President Thomas Leitzel said, safety precautions will be followed and there will be additional safety protocols in place in offices that have direct contact with students to protect employees.

AA classes will remain online for the remainder of the summer terms. Applied Sciences and Health Sciences classes may resume instruction that was delayed from the spring term.

Students in workforce programs will also be contacted to inform them of the reopening schedule.

Workforce class schedules may be staggered and class sizes will follow safe social distancing with class capacities operating at 10 or fewer persons, according to Leitzel.

Kelly’s (cafeteria) on the Highlands Campus will open for business on Monday from 10 a.m. to 2 p.m. daily.

Patrons may eat inside the Johnston Student Center as long as capacity does not exceed 25%. Patrons must adhere to safe social distancing while inside this facility.

College officials continue to monitor the COVID-19 situation, and a decision regarding classes for the fall will be forthcoming following various meetings and discussions with key individuals, including representatives from the SFSC Faculty Council, according to Leitzel.

Peggy Scott got a look at her late husband’s class ring for the first time. She is seen her with her daughter and granddaughters. From left is Hannah Girdley, Peggy Scott, Angela Girdley and Grace Girdley.

Angela Girdley holds her father’s class ring. She never saw the ring before, as her father lost in while swimming in a lake in 1955.

Dixie Howell Scott’s Class of 1955 ring that was retrieved from the bottom of a lake in Putnam County.

LAKE PLACID — Peggy Scott never saw her husband’s class ring and never got to wear it when they dated. Soon after Dixie Howell Scott received his Class of 1955 ring, during senior year, he soon lost it while swimming in a Crescent City lake.

Before his retirement, Dixie served on the Lake Placid Town Council, and as mayor of the small town. Dixie established Scott Funeral Home on Interlake Boulevard. Peggy and Dixie were married 43 years. Dixie died in 2006.

The ring she thought she would never see, was found about two weeks ago by treasure hunter Chris Smith who was searching Crescent Lake’s bottom. Smith’s father Benjamin was metal detecting on the beach. Smith was using a fairly unsophisticated metal detector when he found the ring about 15 feet deep in about an inch and a half of muck.

“It was a miracle, seeing that gold,” Chris Smith said. “I saw the year and “Crescent” and was almost sure we could find who it belonged to.”

Despite having a spot in an antiques store, Smith never thought of keeping the ring.

Near the ring were a coupe of cinder blocks and a gun. Smith was a little concerned about what he would find when they looked for the owner. He was pleasantly surprised when he showed a neighbor the ring and through several people and through social media, they had information on the owner quickly.

Chris showed a neighbor, Paul Ruth, his find. Ruth took pictures and put the ring on Facebook to search for its owner. Melissa Frank private messaged Ruth and asked for the initials engraved on the ring. Frank called her mother, Donelle Wilhite, who still lives in Crescent City.

“I asked my mom if she had her yearbook. My mom graduated in 1956. She said she did and there was only one person with the initials DHS in the book. My mom knew him. They used to call him “Dickie.”

Frank decided to do some sleuthing and began to search Dixie’s whereabouts. She found his obituary online and saw the he was married to Peggy Scott and found his daughter Angela was married to John Girdley, a pastor at Florida Avenue Baptist Church in Avon Park. After messaging on Facebook was unsuccessful, John was reached at work.

“As a pastor, I feel nothing is really lost in God’s economy,” John said. “This is an extra special blessing that we needed right now. We see more than just a ring being found.”

Peggy Scott has said her daughter Angela could have the ring for her granddaughters, Hannah and Grace, who were very young when Dixie died.

“I was shocked,” she said. “I know Dixie lost the ring his senior year swimming, He mentioned it when we were first married and I have never given it another thought. When I got the call last week, I couldn’t believe it.”

SEBRING — With one more case on Friday, the Highlands County total number of COVID-19 cases now stands at 104 with 35 hospitalized during the course of the pandemic.

The death toll in Highlands County remains at eight with the most recent death in Highlands counted by the Florida Department of Health on April 22.

The Florida Department of Health Highlands will be having more drive-thru COVID-19 testing events on the following dates:

Testing is free and no insurance is required. Individuals wanting to be tested for COVID-19 must be 18 or older. Health officials will test as many people as they can at each event.

Statewide 7.1% of those tested are positive for COVID-19 while in Highlands 4.6% are positive.

Hendry County’s percent who test positive has risen to 17.7%.

Hendry County had 24 new cases on Friday boosting the county’s total number of cases to 205 and increasing the total for the Clewiston zip code to 171. The number of deaths in Hendry County attributed to the virus is 12.

A Clewiston nursing home has 19 residents and 19 staff members who have tested positive, according to the Florida Department of Health.

SEBRING — Two people were arrested in connection with Thursday evening’s accidental shooting at Cadagua Drive in Sun ‘N Lake that took place about 10:15 p.m. Thursday. The incident resulted in the death of a 17-year-old male.

Lance Braden Bleiweiss, 20, was arrested Friday evening after leaving the scene on Thursday and was charged with manslaughter. He was being held in the Highlands County Jail as of 5 p.m. on Saturday with no bond.

Alexander Lloyd McGregor, 18, was arrested at the scene of the incident Thursday and charged with possession of a weapon or ammo by a felon. McGregor’s exact charge listed the Highlands County inmate search is 790.23.1b, which states, “It is unlawful for any person to own or to have in his or her care, custody, possession, or control any firearm, ammunition, or electric weapon or device, or to carry a concealed weapon, including a tear gas gun or chemical weapon or device, if that person has been: Found, in the courts of this state, to have committed a delinquent act that would be a felony if committed by an adult and such person is under 24 years of age.”

The Highlands County Sheriff’s Office reported the arrests on its Facebook page, but it didn’t take long for a social media video, allegedly created by the daughter of an HCSO crime scene investigator, to be brought up.

HCSO did acknowledge the video in the comments section with a post that stated, “We are aware of the extremely distasteful and insensitive video that has been circulated. The crime scene investigator whose daughter filmed the video was not on call and was not on the scene of the shooting. The matter is being investigated internally.”

The original HCSO post stated, “Not all arrests result in convictions. Everyone is considered innocent until proven guilty in court.” 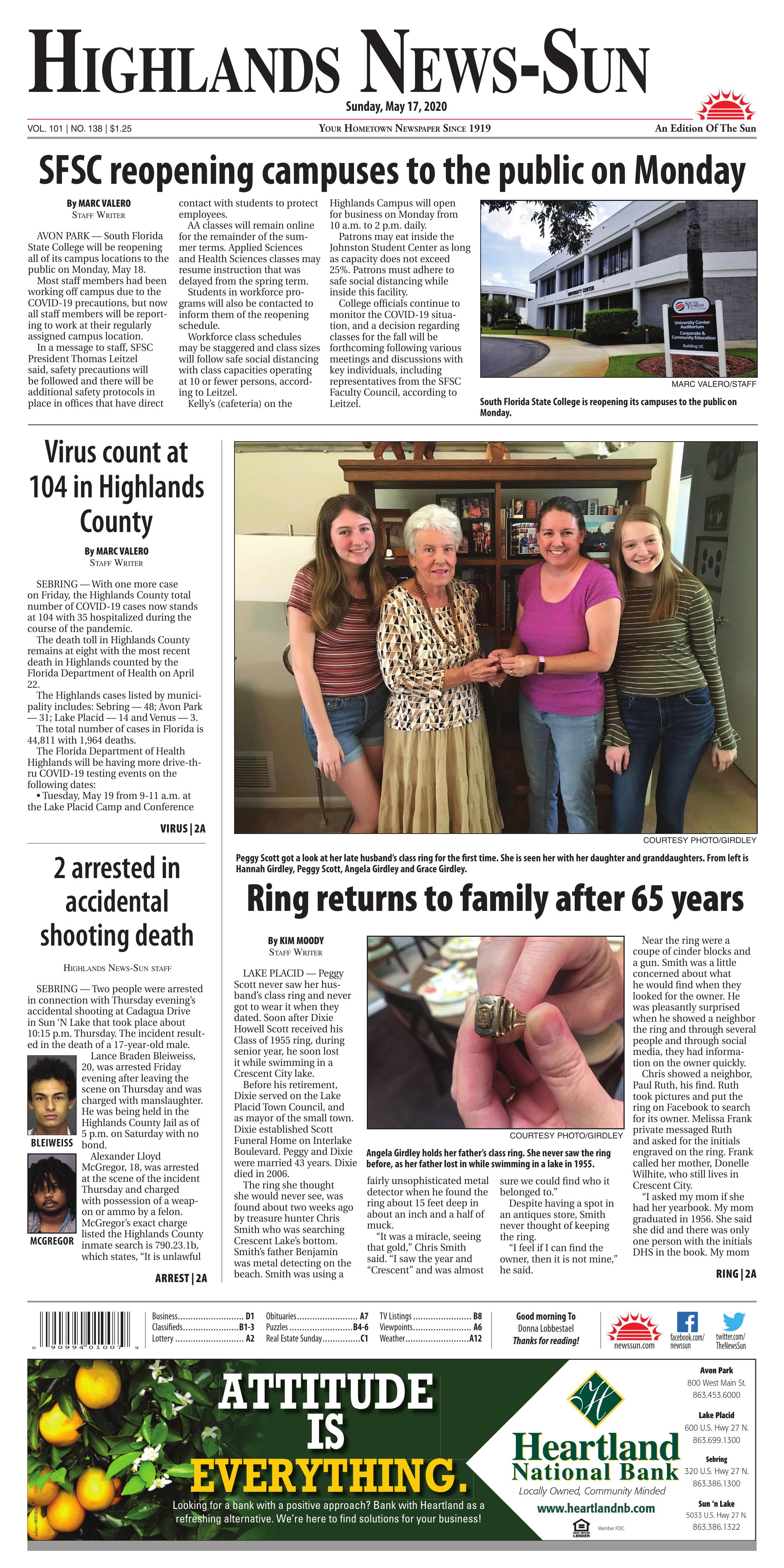