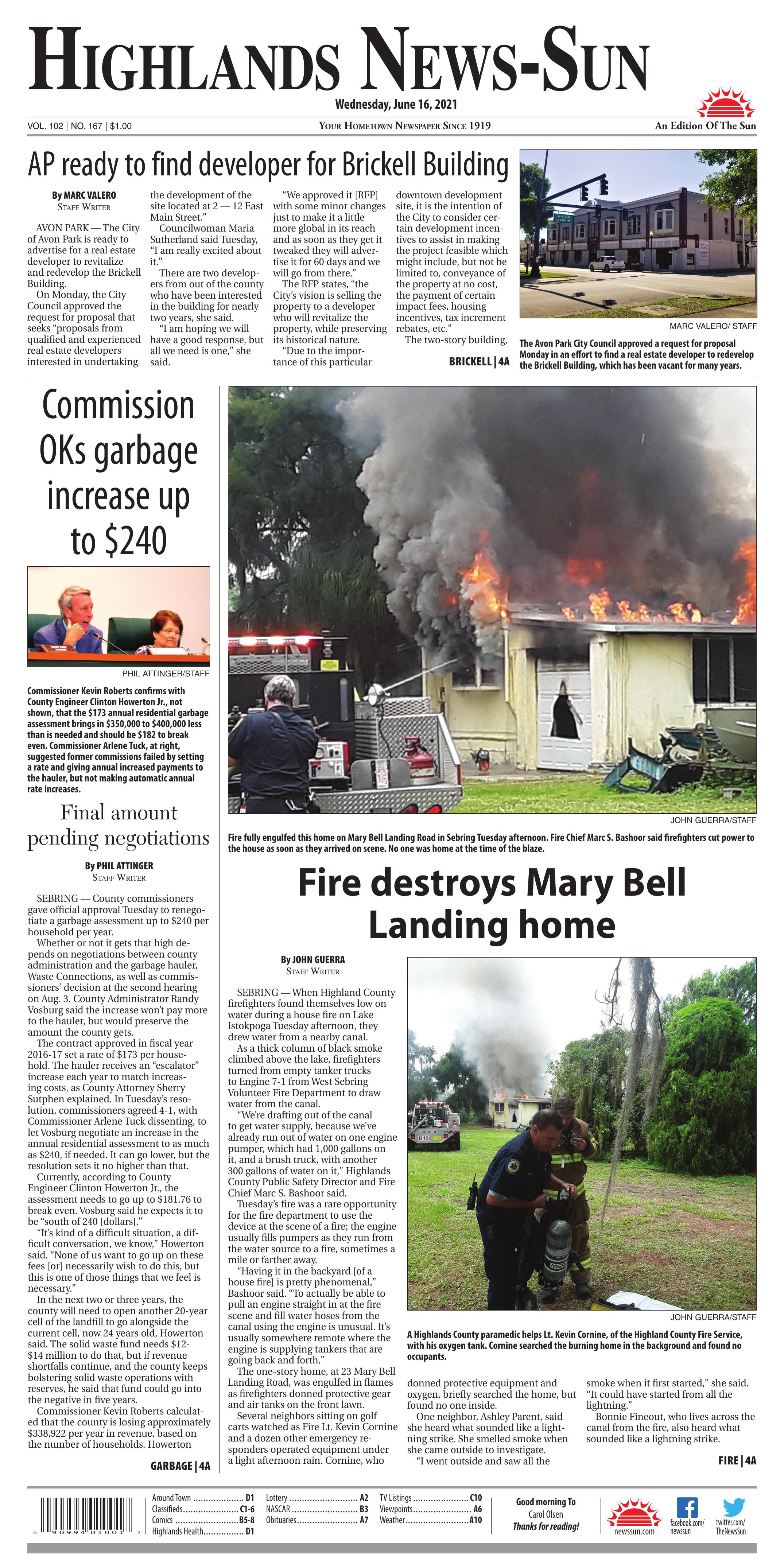 The Avon Park City Council approved a request for proposal Monday in an effort to find a real estate developer to redevelop the Brickell Building, which has been vacant for many years.

AVON PARK — The City of Avon Park is ready to advertise for a real estate developer to revitalize and redevelop the Brickell Building.

On Monday, the City Council approved the request for proposal that seeks “proposals from qualified and experienced real estate developers interested in undertaking the development of the site located at 2 — 12 East Main Street.”

Councilwoman Maria Sutherland said Tuesday, “I am really excited about it.”

There are two developers from out of the county who have been interested in the building for nearly two years, she said.

“I am hoping we will have a good response, but all we need is one,” she said.

“We approved it [RFP] with some minor changes just to make it a little more global in its reach and as soon as they get it tweaked they will advertise it for 60 days and we will go from there.”

The RFP states, “the City’s vision is selling the property to a developer who will revitalize the property, while preserving its historical nature.

“Due to the importance of this particular downtown development site, it is the intention of the City to consider certain development incentives to assist in making the project feasible which might include, but not be limited to, conveyance of the property at no cost, the payment of certain impact fees, housing incentives, tax increment rebates, etc.”

The city’s preference is for a future use to include multi-family housing, retail shops, lunch/dinner eateries, bakery, coffee shop, sports bar, brewery or tap room, etc., with the overall goal of creating a destination for the community and surrounding areas to live, work, shop, play and to increase foot traffic in the downtown area.

In 2015, the Avon Park Housing Authority was considering using the upstairs for housing and it was determined the city would have to pass the ownership of the building to the Main Street Community Redevelopment Agency.

The Housing Authority plan did not happen and the ownership of the building was transferred in February from the CRA back to the City.

The building has been vacant for more than five years.

A Highlands County paramedic helps Lt. Kevin Cornine, of the Highland County Fire Service, with his oxygen tank. Cornine searched the burning home in the background and found no occupants.

Fire fully engulfed this home on Mary Bell Landing Road in Sebring Tuesday afternoon. Fire Chief Marc S. Bashoor said firefighters cut power to the house as soon as they arrived on scene. No one was home at the time of the blaze.

No one was home at 23 Mary Bell Landing Road Tuesday when neighbors heard what they thought was a lightning strike and discovered smoke pouring from the one-story structure. Highlands County Fire Chief Marc S. Bashoor said Tuesday that it was too soon to say what started the fire. He said such unattended structure fires occur several times a year.

Engine 7-1 from West Sebring Volunteer Fire Department draws canal water and sends it into the hoses held by firefighters. The small stream of water helps maintain suction to an intake hose floating on the canal’s surface.

SEBRING — When Highland County firefighters found themselves low on water during a house fire on Lake Istokpoga Tuesday afternoon, they drew water from a nearby canal.

As a thick column of black smoke climbed above the lake, firefighters turned from empty tanker trucks to Engine 7-1 from West Sebring Volunteer Fire Department to draw water from the canal.

“We’re drafting out of the canal to get water supply, because we’ve already run out of water on one engine pumper, which had 1,000 gallons on it, and a brush truck, with another 300 gallons of water on it,” Highlands County Public Safety Director and Fire Chief Marc S. Bashoor said.

Tuesday’s fire was a rare opportunity for the fire department to use the device at the scene of a fire; the engine usually fills pumpers as they run from the water source to a fire, sometimes a mile or farther away.

“Having it in the backyard [of a house fire] is pretty phenomenal,” Bashoor said. “To actually be able to pull an engine straight in at the fire scene and fill water hoses from the canal using the engine is unusual. It’s usually somewhere remote where the engine is supplying tankers that are going back and forth.”

The one-story home, at 23 Mary Bell Landing Road, was engulfed in flames as firefighters donned protective gear and air tanks on the front lawn.

Several neighbors sitting on golf carts watched as Fire Lt. Kevin Cornine and a dozen other emergency responders operated equipment under a light afternoon rain. Cornine, who donned protective equipment and oxygen, briefly searched the home, but found no one inside.

One neighbor, Ashley Parent, said she heard what sounded like a lightning strike. She smelled smoke when she came outside to investigate.

“I went outside and saw all the smoke when it first started,” she said. “It could have started from all the lightning.”

Bonnie Fineout, who lives across the canal from the fire, also heard what sounded like a lightning strike.

“We heard something pop, it may have got hit by lightning,” Fineout told the Highland News-Sun. “A friend of mine and I came outside, saw the smoke and then we smelled it.”

Bashoor said fire officials would look for a cause once the fire is out.

Commissioner Kevin Roberts confirms with County Engineer Clinton Howerton Jr., not shown, that the $173 annual residential garbage assessment brings in $350,000 to $400,000 less than is needed and should be $182 to break even. Commissioner Arlene Tuck, at right, suggested former commissions failed by setting a rate and giving annual increased payments to the hauler, but not making automatic annual rate increases.

P Attinger / PROVIDED BY HIGHLANDS COUNTY BOARD OF COUNTY COMMISSIONERS

A graphic from Highlands County Engineering shows the relative shortfall the county experiences as more of the garbage assessment, shown in blue, goes to the contracted hauler, Waste Connections, according to contract, leaving less for the county's solid waste operations, shown in orange. Commissioners have given leeway for administration to negotiate a higher rate to cover the shortfall, shown as shaded orange.

SEBRING — County commissioners gave official approval Tuesday to renegotiate a garbage assessment up to $240 per household per year.

Whether or not it gets that high depends on negotiations between county administration and the garbage hauler, Waste Connections, as well as commissioners’ decision at the second hearing on Aug. 3. County Administrator Randy Vosburg said the increase won’t pay more to the hauler, but would preserve the amount the county gets.

The contract approved in fiscal year 2016-17 set a rate of $173 per household. The hauler receives an “escalator” increase each year to match increasing costs, as County Attorney Sherry Sutphen explained. In Tuesday’s resolution, commissioners agreed 4-1, with Commissioner Arlene Tuck dissenting, to let Vosburg negotiate an increase in the annual residential assessment to as much as $240, if needed. It can go lower, but the resolution sets it no higher than that.

Currently, according to County Engineer Clinton Howerton Jr., the assessment needs to go up to $181.76 to break even. Vosburg said he expects it to be “south of 240 [dollars].”

“It’s kind of a difficult situation, a difficult conversation, we know,” Howerton said. “None of us want to go up on these fees [or] necessarily wish to do this, but this is one of those things that we feel is necessary.”

In the next two or three years, the county will need to open another 20-year cell of the landfill to go alongside the current cell, now 24 years old, Howerton said. The solid waste fund needs $12-$14 million to do that, but if revenue shortfalls continue, and the county keeps bolstering solid waste operations with reserves, he said that fund could go into the negative in five years.

Commissioner Kevin Roberts calculated that the county is losing approximately $338,922 per year in revenue, based on the number of households. Howerton agreed. Roberts suggested staff put out bullet-point reasons to the public for raising the rate to help commissioners and residents.

Tuck asked how the county came up with $173 per household; Howerton said that was before his tenure. Vosburg said it was, in part, defined by the hauler’s bid for the contract. Sutphen said Hurricane Irma and other crises have delayed discussion of increasing the rate.

Commission Chair Scott Kirouac estimated that $240 per year would be an increase of $1.28 per week, and $225 would be $1 per week. He said he was mindful of the fact that people’s ability to pay increases varies, and pledged to keep those increases to a minimum.

“This is a can that was kicked to this commission,” Kirouac said, adding that when he ran for office, many constituents told him: “If you can fix my garbage and fix the service for a dollar a week, fix it.”

Sutphen said the assessment rate has no bearing or connection to Waste Connections’ appeal to Vosburg’s designation of the hauler as an “habitual offender” for allegedly not meeting contract obligations. That appeal is still to be heard, she said.