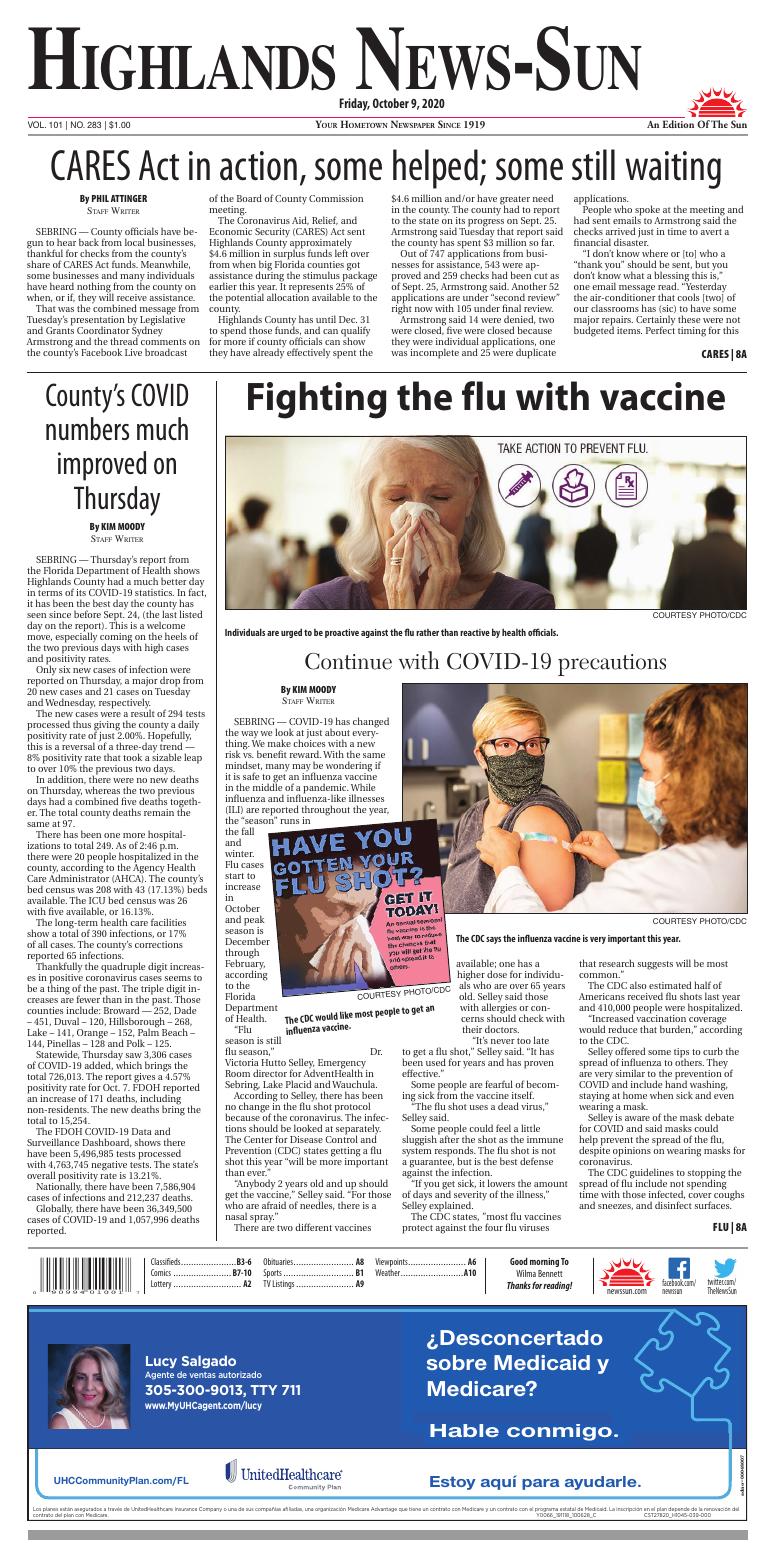 SEBRING — County officials have begun to hear back from local businesses, thankful for checks from the county’s share of CARES Act funds. Meanwhile, some businesses and many individuals have heard nothing from the county on when, or if, they will receive assistance.

That was the combined message from Tuesday’s presentation by Legislative and Grants Coordinator Sydney Armstrong and the thread comments on the county’s Facebook Live broadcast of the Board of County Commission meeting.

The Coronavirus Aid, Relief, and Economic Security (CARES) Act sent Highlands County approximately $4.6 million in surplus funds left over from when big Florida counties got assistance during the stimulus package earlier this year. It represents 25% of the potential allocation available to the county.

Highlands County has until Dec. 31 to spend those funds, and can qualify for more if county officials can show they have already effectively spent the $4.6 million and/or have greater need in the county. The county had to report to the state on its progress on Sept. 25. Armstrong said Tuesday that report said the county has spent $3 million so far.

Out of 747 applications from businesses for assistance, 543 were approved and 259 checks had been cut as of Sept. 25, Armstrong said. Another 52 applications are under “second review” right now with 105 under final review.

Armstrong said 14 were denied, two were closed, five were closed because they were individual applications, one was incomplete and 25 were duplicate applications.

People who spoke at the meeting and had sent emails to Armstrong said the checks arrived just in time to avert a financial disaster.

“I don’t know where or [to] who a “thank you” should be sent, but you don’t know what a blessing this is,” one email message read. “Yesterday the air-conditioner that cools [two] of our classrooms has (sic) to have some major repairs. Certainly these were not budgeted items. Perfect timing for this grant.”

Another wrote, “The struggle for our salon industry is real. God bless you for giving me the opportunity to continue serving my community.”

Susan Norris of Trinity Tots Preschool, who said hers was the air-conditioning problem, said the majority of early childhood centers are struggling.

Some non-working parents or those with grandparents available to watch children have chosen to keep their kids at home during the pandemic. The loss of five to 10 children’s tuition can hurt budgets, she said. She also said the water bill has gone up, the daycare purchased a fogger to sanitize items, extra thermometers and sanitization supplies.

Anthony Haney, executive director of the Lake Placid Camp and Conference Center, said their facility has lost $2 million in revenue and dropped staff from approximately 27 to five.

“We believe that we are going to overcome it,” Haney said.

Laurie Murphy with Nu-Hope Elder Care Services said the non-profit had to close down congregate meal sites, because of the pandemic.

“As a non-profit, as I’m sure you all know, it’s a struggle,” Murphy said. “The services you have in January, you have to make sure to have in December. Clients aren’t just ‘one and done.’”

Where the organization was delivering 115 meals to homes in January, they delivered 565 in August.

Comments on the thread said they are still in the midst of that disaster and are afraid of going under.

Local business owners Vicki and Mike Jarvis, speaking via the social media thread, said several businesses haven’t gotten their money, and they were approved back in August and September.

Christopher Santi lodged several complaints through the thread regarding the time and number of people dedicated to checking applications.

“Y’all need some more staff working on this,” wrote La’Keidra Gasper. “This is ridiculous.”

Individual cases saw a total of 2,426 applications, of which 719 were approved and 498 got checks cut as of Sept. 25. Of the total, 976 are in second review and 454 are in final review. Eight have been closed, with another closed and approved as business applications, with another two listed as needed to apply as businesses. Of the rest, 28 were denied, five were incomplete and 170 were closed as duplicates.

To questions from commissioners, Armstrong said they have added a reviewer to the final review stage, and a lot of individual cases should be going over to the Clerk of Courts for review.

County Administrator Randy Vosburg said county officials’ reviews of business applications should be complete this week with individual applications going through the middle of next week.

Commissioner Jim Brooks asked how the county compares to other counties on getting applications approved. Vosburg said he was biased, but thought they were doing well.

“Another county just opened the application process on Oct. 5,” Vosburg said. “We’re being compared to larger counties that got money first.”

Brooks asked further on how the process is working, and Armstrong said Highlands is “ahead of the game” compared to that other county.

Brooks then asked about the second allotment, and Armstrong said the county is working daily with the Florida Department of Emergency Management, which is overseeing the funds.

Once the county gets this first round of checks wrapped up in a couple of weeks, then the second allotment would be considered, she said. Some counties will have even less time to get and use that money.

When people call in to the county’s hotline, Armstrong said, call-takers can look at the online application portal to review the status of the case for that caller.

Kutanya Williams-Mckeithan, commenting online, did not think the county did a great job of informing the community on how the program would work.

“It leaves the community waiting, confused and aggravated by this entire process,” Williams-Mckeithan wrote.

Theodore “Pink Tie” Murray, running for U.S. House of Representatives, District 17, warned commissioners not to forget that they can use the funds for “stop gap” measures.

He said the government sent out $6.42 trillion and “can’t do that again,” so he encouraged people to request what they need.

“We pay $200 billion per year [for the federal government] to redistribute to the local governments,” Murray said. “Don’t be afraid to ask for help.”

The CDC says the influenza vaccine is very important this year.

Individuals are urged to be proactive against the flu rather than reactive by health officials.

The CDC would like most people to get an influenza vaccine.

SEBRING — COVID-19 has changed the way we look at just about everything. We make choices with a new risk vs. benefit reward. With the same mindset, many may be wondering if it is safe to get an influenza vaccine in the middle of a pandemic. While influenza and influenza-like illnesses (ILI) are reported throughout the year, the “season” runs in the fall and winter. Flu cases start to increase in October and peak season is December through February, according to the Florida Department of Health.

According to Selley, there has been no change in the flu shot protocol because of the coronavirus. The infections should be looked at separately. The Center for Disease Control and Prevention (CDC) states getting a flu shot this year “will be more important than ever.”

“Anybody 2 years old and up should get the vaccine,” Selley said. “For those who are afraid of needles, there is a nasal spray.”

There are two different vaccines available; one has a higher dose for individuals who are over 65 years old. Selley said those with allergies or concerns should check with their doctors.

“It’s never too late to get a flu shot,” Selley said. “It has been used for years and has proven effective.”

Some people are fearful of becoming sick from the vaccine itself.

Some people could feel a little sluggish after the shot as the immune system responds. The flu shot is not a guarantee, but is the best defense against the infection.

“If you get sick, it lowers the amount of days and severity of the illness,” Selley explained.

The CDC states, ”most flu vaccines protect against the four flu viruses that research suggests will be most common.”

The CDC also estimated half of Americans received flu shots last year and 410,000 people were hospitalized.

“Increased vaccination coverage would reduce that burden,” according to the CDC.

Selley offered some tips to curb the spread of influenza to others. They are very similar to the prevention of COVID and include hand washing, staying at home when sick and even wearing a mask.

Selley is aware of the mask debate for COVID and said masks could help prevent the spread of the flu, despite opinions on wearing masks for coronavirus.

The CDC guidelines to stopping the spread of flu include not spending time with those infected, cover coughs and sneezes, and disinfect surfaces.

“For flu, CDC recommends that people stay home for at least 24 hours after their fever is gone except to get medical care or other necessities. Fever should be gone without the need to use a fever-reducing medicine,” the CDC site stated.

COVID orders for staying at home would likely be different, according to the CDC.

“Regardless of what you have, it means you care for others,” Selley said.

Healthy lifestyles and decisions going into flu season are also a way to avoid infection. Selley said to get plenty of sleep, stay hydrated, have a balanced diet and take a multivitamin.

“Flu vaccines will not prevent COVID-19, but they will reduce the burden of flu illnesses, hospitalizations and deaths on the health care system and conserve scarce medical resources for the care of people with COVID-19,” the CDC states on its website.

Weekly influenza reports can be found year-round at cdc.gov/flu/weekly.

SEBRING — Thursday's report from the Florida Department of Health shows Highlands County had a much better day in terms of its COVID-19 statistics. In fact, it has been the best day the county has seen since before Sept. 24, (the last listed day on the report). This is a welcome move, especially coming on the heels of the two previous days with high cases and positivity rates.

Only six new cases of infection were reported on Thursday, a major drop from 20 new cases and 21 cases on Tuesday and Wednesday, respectively.

The new cases were a result of 294 tests processed thus giving the county a daily positivity rate of just 2.00%. Hopefully, this is a reversal of a three-day trend - 8% positivity rate that took a sizable leap to over 10% the previous two days.

In addition, there were no new deaths on Thursday, whereas the two previous days had a combined five deaths together. The total county deaths remain the same at 97.

The long-term health care facilities show a total of 390 infections, or 17% of all cases. The county's corrections reported 65 infections. 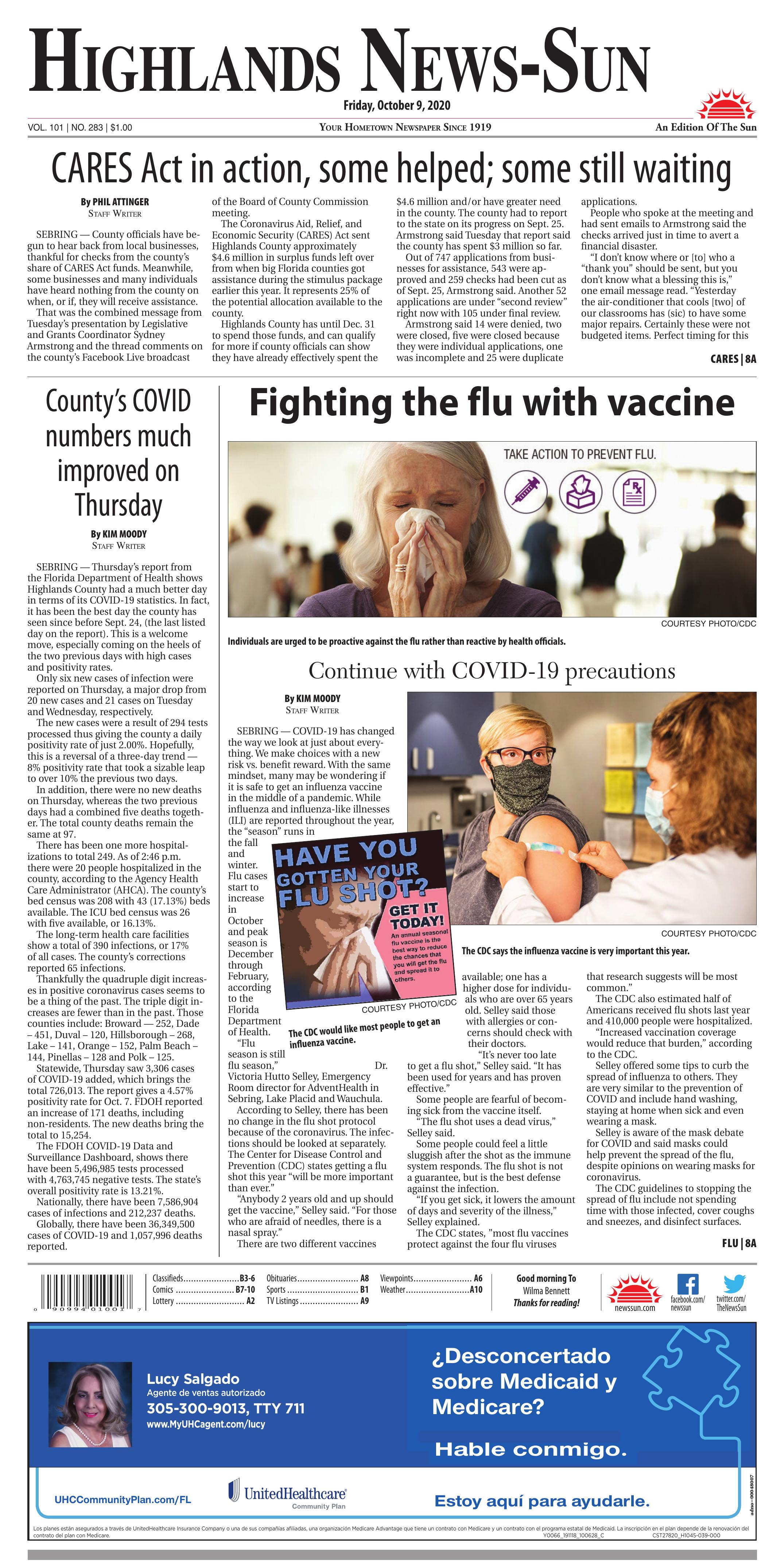