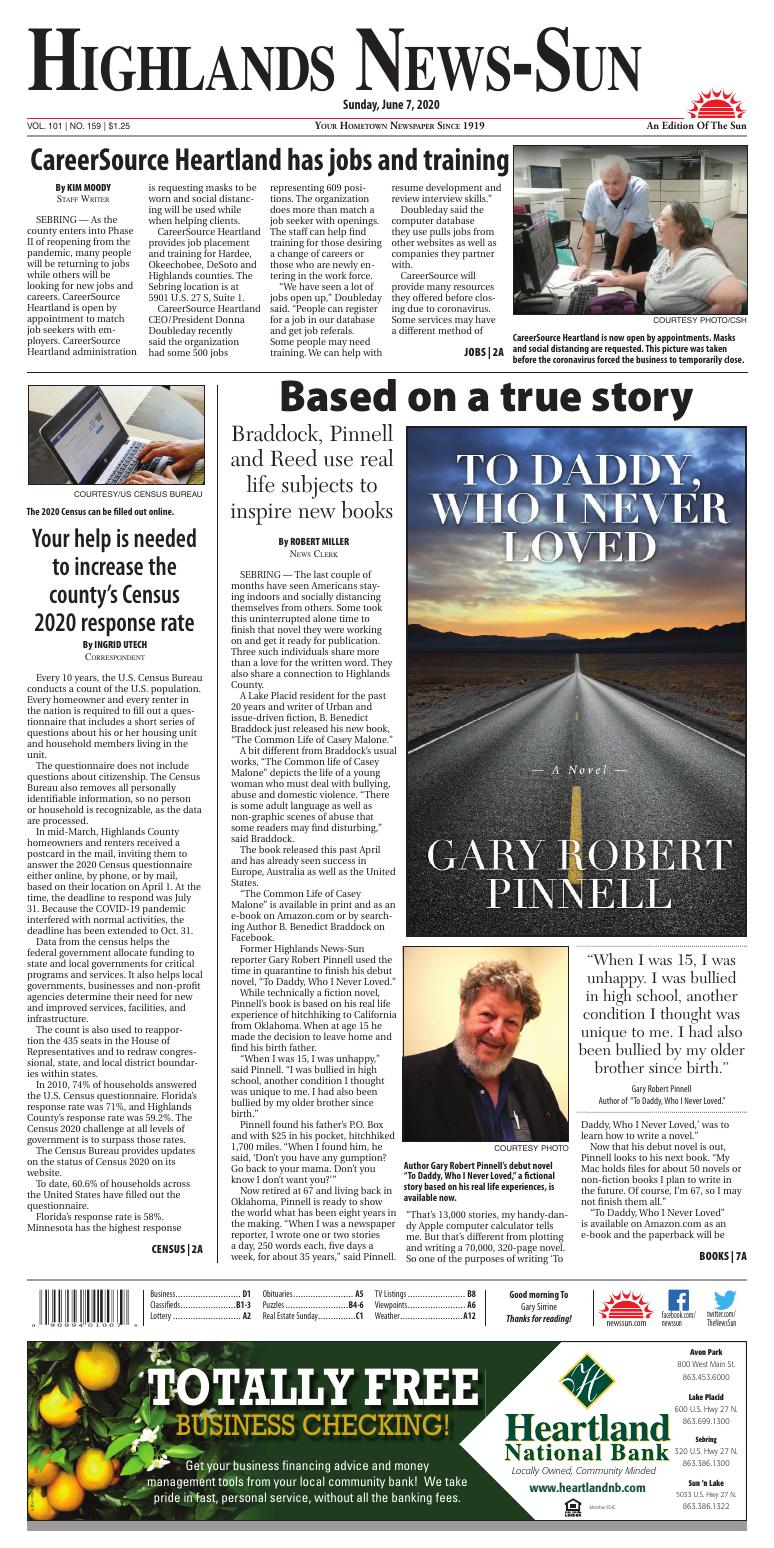 CareerSource Heartland is now open by appointments. Masks and social distancing are requested. This picture was taken before the coronavirus forced the business to temporarily close.

SEBRING — As the county enters into Phase II of reopening from the pandemic, many people will be returning to jobs while others will be looking for new jobs and careers. CareerSource Heartland is open by appointment to match job seekers with employers. CareerSource Heartland administration is requesting masks to be worn and social distancing will be used while when helping clients.

CareerSource Heartland CEO/President Donna Doubleday recently said the organization had some 500 jobs representing 609 positions. The organization does more than match a job seeker with openings. The staff can help find training for those desiring a change of careers or those who are newly entering in the work force.

“We have seen a lot of jobs open up,” Doubleday said. “People can register for a job in our database and get job referals. Some people may need training. We can help with resume development and review interview skills.”

Doubleday said the computer database they use pulls jobs from other websites as well as companies they partner with.

CareerSource will provide many resources they offered before closing due to coronavirus. Some services may have a different method of delivery such as webinars or by phone calls.

Clients have access to funding for specific careers that need training as truck drivers, nursing, industrial and trade jobs.

“There are some on-the-job-training jobs possible for the right person,” Doubleday said. “There are funds available for temporary employment opportunity for humanitarian or clean up efforts related to COVID-19 for non-profits or individuals who are unemployed because of COVID-19.

While the staff will not apply for reemployment benefits for clients, computer access is available for those applying. The staff can help individuals navigate the system and provide paper claims.

News
Based on a true story
By ROBERT MILLER News Clerk
06.07.20
COURTESY PHOTO

Author Gary Robert Pinnell’s debut novel “To Daddy, Who I Never Loved,” a fictional story based on his real life experiences, is available now.

Philip J. Reed is a former Sebring resident and current author. His non-fiction book, “Resident Evil,” will be available in August. Links can be found on his website, NoiselessChatter.com.

SEBRING — The last couple of months have seen Americans staying indoors and socially distancing themselves from others. Some took this uninterrupted alone time to finish that novel they were working on and get it ready for publication. Three such individuals share more than a love for the written word. They also share a connection to Highlands County.

A Lake Placid resident for the past 20 years and writer of Urban and issue-driven fiction, B. Benedict Braddock just released his new book, “The Common Life of Casey Malone.”

A bit different from Braddock’s usual works, “The Common life of Casey Malone” depicts the life of a young woman who must deal with bullying, abuse and domestic violence. “There is some adult language as well as non-graphic scenes of abuse that some readers may find disturbing,” said Braddock.

The book released this past April and has already seen success in Europe, Australia as well as the United States.

“The Common Life of Casey Malone” is available in print and as an e-book on Amazon.com or by searching Author B. Benedict Braddock on Facebook.

Former Highlands News-Sun reporter Gary Robert Pinnell used the time in quarantine to finish his debut novel, “To Daddy, Who I Never Loved.”

While technically a fiction novel, Pinnell’s book is based on his real life experience of hitchhiking to California from Oklahoma. When at age 15 he made the decision to leave home and find his birth father.

“When I was 15, I was unhappy,” said Pinnell. “I was bullied in high school, another condition I thought was unique to me. I had also been bullied by my older brother since birth.”

Now retired at 67 and living back in Oklahoma, Pinnell is ready to show the world what has been eight years in the making. “When I was a newspaper reporter, I wrote one or two stories a day, 250 words each, five days a week, for about 35 years,” said Pinnell. “That’s 13,000 stories, my handy-dandy Apple computer calculator tells me. But that’s different from plotting and writing a 70,000, 320-page novel. So one of the purposes of writing ‘To Daddy, Who I Never Loved,’ was to learn how to write a novel.”

Now that his debut novel is out, Pinnell looks to his next book. “My Mac holds files for about 50 novels or non-fiction books I plan to write in the future. Of course, I’m 67, so I may not finish them all.”

“To Daddy, Who I Never Loved” is available on Amazon.com as an e-book and the paperback will be available in September or it can be found through Pinnell’s website, GaryRobertPinnell.com.

Former Sebring resident Philip J. Reed is gearing up for the release of his non-fiction book about the classic survival horror video game, “Resident Evil.”

“I pitched it to Boss Fight Books with the mindset that Resident Evil is silly and we could chuckle about it and crack jokes as we explored its methods and its history,” said Reed. “but in all honesty it held up far better than I expected.”

Now a writer living in Denver, Colorado and working for the federal government, he was a Sebring resident until 2012. “I had a nice little apartment on Dinner Lake. Just about every day after work I’d head out there and read by the water as the sun set. It was very peaceful and I miss that.”

Inspired to write one kind of book about Resident Evil, Reed said that what he ended up with was a very different book altogether. While putting together a chapter on the notoriously bad voice acting, for instance, he was able to get the scoop from the voice actors themselves and found out that there was a very good reason that the voice acting was so horrendous back then.

“The fact is that I was inspired to write one kind of book, and ended up writing something much different, much better, and much more interesting,” Reed said. “These stories were there for the taking. I was lucky enough to be the guy who asked to hear them.”

When he’s not working for the federal government or researching a 25-year-old video game, Reed manages his website, NoiselessChatter.com. “I manage Noiseless Chatter, where I write long form critical analyses of things that probably don’t deserve it,” said Reed. “I even analyzed every episode of ALF, which has likely put me on a watch list. Searching Noiseless Chatter on Facebook, Instagram and Twitter will lead you to my social profiles.”

“Resident Evil” will be available in August in both paperback and e-book from Boss Fight Books, Amazon.com and other booksellers.

“Writing has always been my main hobby and outlet,” said Reed. “I’ve been lucky enough to write professionally for around 20 years now, both criticism and fiction. Not that anyone pays me to write the fiction…”

The 2020 Census can be filled out online.

Every 10 years, the U.S. Census Bureau conducts a count of the U.S. population. Every homeowner and every renter in the nation is required to fill out a questionnaire that includes a short series of questions about his or her housing unit and household members living in the unit.

The questionnaire does not include questions about citizenship. The Census Bureau also removes all personally identifiable information, so no person or household is recognizable, as the data are processed.

In mid-March, Highlands County homeowners and renters received a postcard in the mail, inviting them to answer the 2020 Census questionnaire either online, by phone, or by mail, based on their location on April 1. At the time, the deadline to respond was July 31. Because the COVID-19 pandemic interfered with normal activities, the deadline has been extended to Oct. 31.

Data from the census helps the federal government allocate funding to state and local governments for critical programs and services. It also helps local governments, businesses and non-profit agencies determine their need for new and improved services, facilities, and infrastructure.

The count is also used to reapportion the 435 seats in the House of Representatives and to redraw congressional, state, and local district boundaries within states.

The Census Bureau provides updates on the status of Census 2020 on its website.

To date, 60.6% of households across the United States have filled out the questionnaire.

Florida’s response rate is 58%. Minnesota has the highest response rate at 70%, followed by 16 other states with response rates between 63% and 68%. Alaska at 41% has the lowest response rate. Four states are hovering around 50%. Remaining states fall somewhere within the low 50s to high 50s.

The Highlands County census tract with the highest response rate at 72% is bounded by U.S. 27 on the east, Highlands Hammock on the west, Hammock Road on the north, and SR 66 on the south. Multiple developments are located in this tract, including but not limited to the Country Club of Sebring, Lakewood Terrace, Lake Haven Estates, and Orange Blossom Estates. Households total 2,908.

The tract with the second highest response rate at 67% is the tract that comprises Placid Lakes subdivision. The tract is bounded on the east by Lake Placid Lake and on the north by Lake June-in-Winter. Households total 1,985.

The census tract with the lowest response rate at 37.1% is the tract which is bounded by U.S. 27 on the west, Memorial Drive on the east, West Hal McRae Boulevard on the north and Valerie Boulevard on the south. The Bluffs of Sebring, South Florida State College, and the Palms at Lake Tulane are encompassed in this tract. Households total 1,034.

Some of the homeowners and renters in this tract are seasonal residents and may have chosen to respond to the census from their primary residence which would account in part for the low response rate.

The tract with the second lowest response rate at 37.5% is the tract in the southernmost portion of the county. It is bordered by SR 70 on the north and the Highlands County line on the south. It includes Archbold Biological Station and the town of Venus. Households total 932. 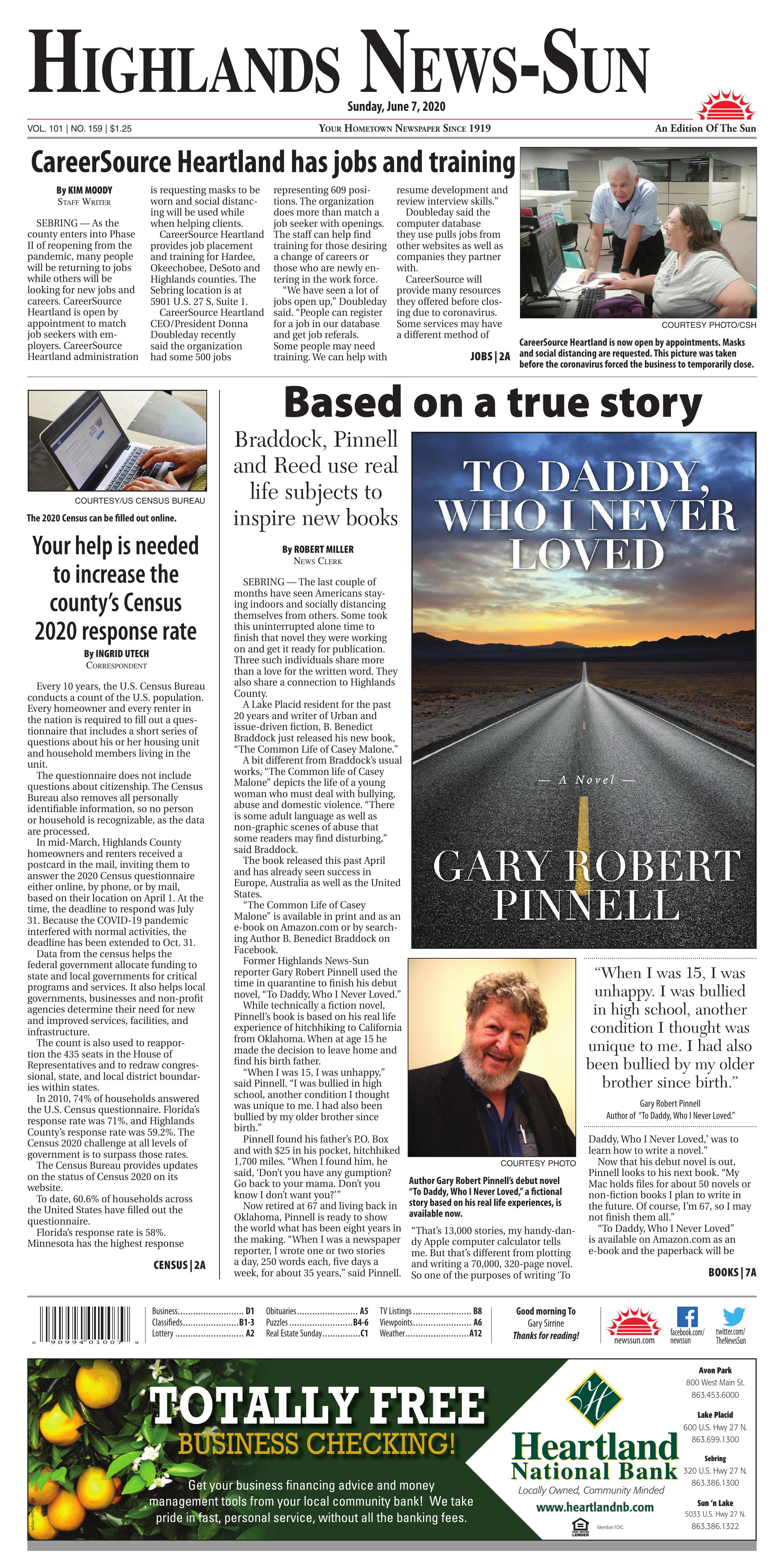