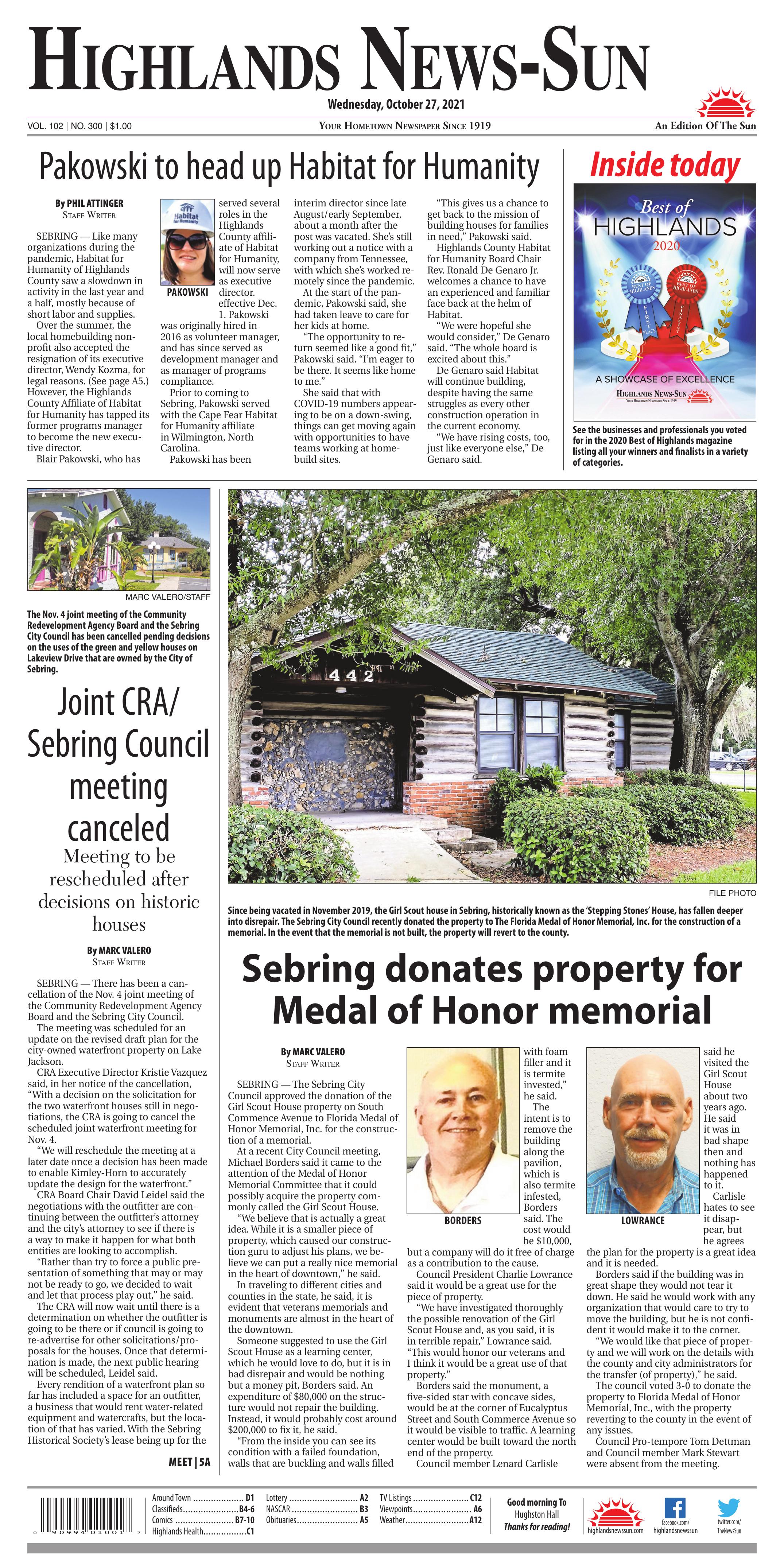 SEBRING — Like many organizations during the pandemic, Habitat for Humanity of Highlands County saw a slowdown in activity in the last year and a half, mostly because of short labor and supplies.

Over the summer, the local homebuilding nonprofit also accepted the resignation of its executive director, Wendy Kozma, for legal reasons. (See page A5.) However, the Highlands County Affiliate of Habitat for Humanity has tapped its former programs manager to become the new executive director.

Blair Pakowski, who has served several roles in the Highlands County affiliate of Habitat for Humanity, will now serve as executive director. effective Dec. 1. Pakowski was originally hired in 2016 as volunteer manager, and has since served as development manager and as manager of programs compliance.

Prior to coming to Sebring, Pakowski served with the Cape Fear Habitat for Humanity affiliate in Wilmington, North Carolina.

Pakowski has been interim director since late August/early September, about a month after the post was vacated. She’s still working out a notice with a company from Tennessee, with which she’s worked remotely since the pandemic.

At the start of the pandemic, Pakowski said, she had taken leave to care for her kids at home.

“The opportunity to return seemed like a good fit,” Pakowski said. “I’m eager to be there. It seems like home to me.”

She said that with COVID-19 numbers appearing to be on a down-swing, things can get moving again with opportunities to have teams working at home-build sites.

“This gives us a chance to get back to the mission of building houses for families in need,” Pakowski said.

Highlands County Habitat for Humanity Board Chair Rev. Ronald De Genaro Jr. welcomes a chance to have an experienced and familiar face back at the helm of Habitat.

“We were hopeful she would consider,” De Genaro said. “The whole board is excited about this.”

De Genaro said Habitat will continue building, despite having the same struggles as every other construction operation in the current economy.

“We have rising costs, too, just like everyone else,” De Genaro said.

Since being vacated in November 2019, the Girl Scout house in Sebring, historically known as the ‘Stepping Stones’ House, has fallen deeper into disrepair. The Sebring City Council recently donated the property to The Florida Medal of Honor Memorial, Inc. for the construction of a memorial. In the event that the memorial is not built, the property will revert to the county.

SEBRING — The Sebring City Council approved the donation of the Girl Scout House property on South Commence Avenue to Florida Medal of Honor Memorial, Inc. for the construction of a memorial.

At a recent City Council meeting, Michael Borders said it came to the attention of the Medal of Honor Memorial Committee that it could possibly acquire the property commonly called the Girl Scout House.

“We believe that is actually a great idea. While it is a smaller piece of property, which caused our construction guru to adjust his plans, we believe we can put a really nice memorial in the heart of downtown,” he said.

In traveling to different cities and counties in the state, he said, it is evident that veterans memorials and monuments are almost in the heart of the downtown.

Someone suggested to use the Girl Scout House as a learning center, which he would love to do, but it is in bad disrepair and would be nothing but a money pit, Borders said. An expenditure of $80,000 on the structure would not repair the building. Instead, it would probably cost around $200,000 to fix it, he said.

“From the inside you can see its condition with a failed foundation, walls that are buckling and walls filled with foam filler and it is termite invested,” he said.

The intent is to remove the building along the pavilion, which is also termite infested, Borders said. The cost would be $10,000, but a company will do it free of charge as a contribution to the cause.

Council President Charlie Lowrance said it would be a great use for the piece of property.

“We have investigated thoroughly the possible renovation of the Girl Scout House and, as you said, it is in terrible repair,” Lowrance said. “This would honor our veterans and I think it would be a great use of that property.”

Borders said the monument, a five-sided star with concave sides, would be at the corner of Eucalyptus Street and South Commerce Avenue so it would be visible to traffic. A learning center would be built toward the north end of the property.

Council member Lenard Carlisle said he visited the Girl Scout House about two years ago. He said it was in bad shape then and nothing has happened to it.

Carlisle hates to see it disappear, but he agrees the plan for the property is a great idea and it is needed.

Borders said if the building was in great shape they would not tear it down. He said he would work with any organization that would care to try to move the building, but he is not confident it would make it to the corner.

“We would like that piece of property and we will work on the details with the county and city administrators for the transfer (of property),” he said.

The council voted 3-0 to donate the property to Florida Medal of Honor Memorial, Inc., with the property reverting to the county in the event of any issues.

The Nov. 4 joint meeting of the Community Redevelopment Agency Board and the Sebring City Council has been cancelled pending decisions on the uses of the green and yellow houses on Lakeview Drive that are owned by the City of Sebring.

SEBRING — There has been a cancellation of the Nov. 4 joint meeting of the Community Redevelopment Agency Board and the Sebring City Council.

The meeting was scheduled for an update on the revised draft plan for the city-owned waterfront property on Lake Jackson.

CRA Executive Director Kristie Vazquez said, in her notice of the cancellation, “With a decision on the solicitation for the two waterfront houses still in negotiations, the CRA is going to cancel the scheduled joint waterfront meeting for Nov. 4.

“We will reschedule the meeting at a later date once a decision has been made to enable Kimley-Horn to accurately update the design for the waterfront.”

CRA Board Chair David Leidel said the negotiations with the outfitter are continuing between the outfitter’s attorney and the city’s attorney to see if there is a way to make it happen for what both entities are looking to accomplish.

“Rather than try to force a public presentation of something that may or may not be ready to go, we decided to wait and let that process play out,” he said.

The CRA will now wait until there is a determination on whether the outfitter is going to be there or if council is going to re-advertise for other solicitations/proposals for the houses. Once that determination is made, the next public hearing will be scheduled, Leidel said.

Every rendition of a waterfront plan so far has included a space for an outfitter, a business that would rent water-related equipment and watercrafts, but the location of that has varied. With the Sebring Historical Society’s lease being up for the houses, the city sought another use/proposal for the houses.

At the July 6 City Council meeting, Sebring city staff was directed to issue a solicitation for the disposal of the Weigle House (yellow house) at 1989 Lakeview Drive and the Clovelly House (green house) at 1971 Lakeview Drive.

The city received responses from the Sebring Historical Society and Jeff and Lilly Stanley of the proposed Sebring Adventure Center.

The Stanleys proposal includes a floating water park, human-powered craft such a kayaking and canoe rentals, and motor-powered craft/activities such as jet skiing, pontoon boating, water skiing and lake cruises.

At a September City Council meeting, council was agreeable to the Stanleys proposal, but council wanted the city to retain ownership of the property. 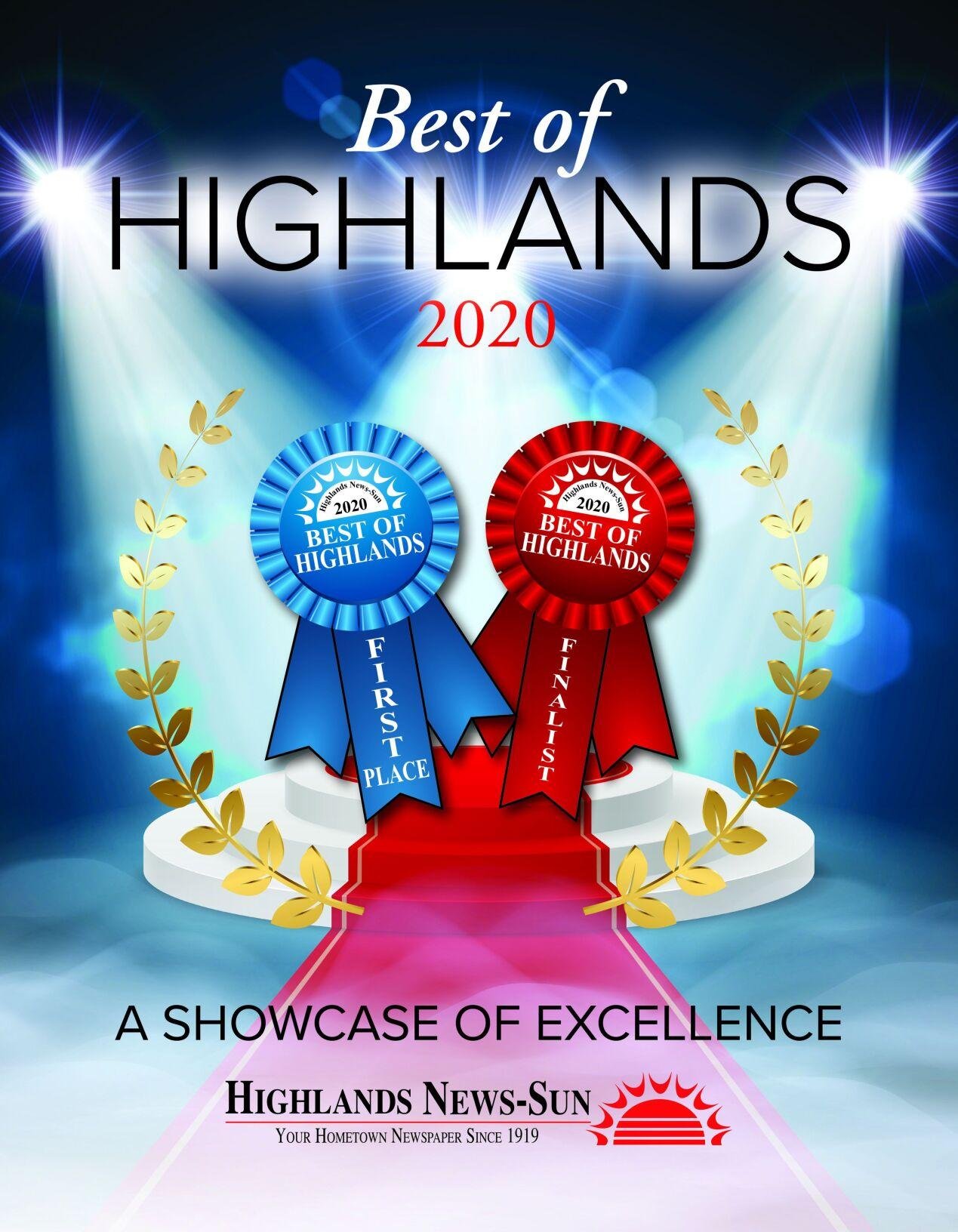 See the businesses and professionals you voted for in the 2020 Best of Highlands magazine listing all your winners and finalists in a variety of categories.