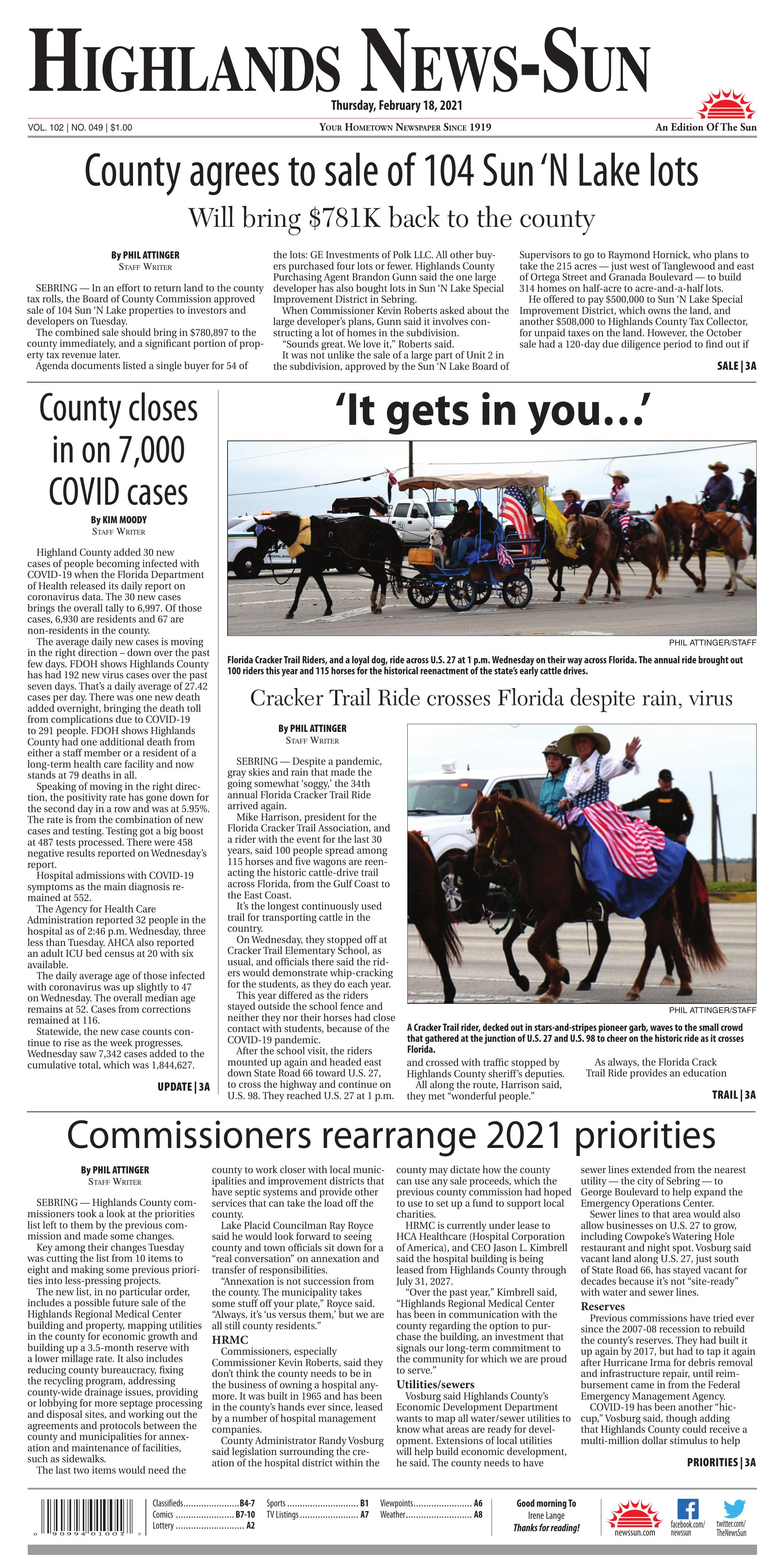 SEBRING — In an effort to return land to the county tax rolls, the Board of County Commission approved sale of 104 Sun ‘N Lake properties to investors and developers on Tuesday.

The combined sale should bring in $780,897 to the county immediately, and a significant portion of property tax revenue later.

When Commissioner Kevin Roberts asked about the large developer’s plans, Gunn said it involves constructing a lot of homes in the subdivision.

It was not unlike the sale of a large part of Unit 2 in the subdivision, approved by the Sun ‘N Lake Board of Supervisors to go to Raymond Hornick, who plans to take the 215 acres — just west of Tanglewood and east of Ortega Street and Granada Boulevard — to build 314 homes on half-acre to acre-and-a-half lots.

He offered to pay $500,000 to Sun ‘N Lake Special Improvement District, which owns the land, and another $508,000 to Highlands County Tax Collector, for unpaid taxes on the land. However, the October sale had a 120-day due diligence period to find out if county commissioners will want him to pay to widen Schumacher Road.

He told the Sun ‘N Lake Board of Supervisors that if the county asks him to do that, he won’t be able to make the development work.

Highlands_news-sun
‘It gets in you' — Cracker Trail Ride crosses Florida despite rain, virus
PHIL ATTINGER/STAFF

Florida Cracker Trail Riders, and a loyal dog, ride across U.S. 27 at 1 p.m. Wednesday on their way across Florida. The annual ride brought out 100 riders this year and 115 horses for the historical reenactment of the state’s early cattle drives.

A Cracker Trail rider, decked out in stars-and-stripes pioneer garb, waves to the small crowd that gathered at the junction of U.S. 27 and U.S. 98 to cheer on the historic ride as it crosses Florida.

Whip in the air, a Florida Cracker Trail rider prepares to ‘crack’ the whip that is emblematic of early Florida cattle-raising pioneers, known as ‘crackers’ for the whips they would crack to drive cattle from the woods and on toward market.

SEBRING — Despite a pandemic, gray skies and rain that made the going somewhat ‘soggy,’ the 34th annual Florida Cracker Trail Ride arrived again.

Mike Harrison, president for the Florida Cracker Trail Association, and a rider with the event for the last 30 years, said 100 people spread among 115 horses and five wagons are reenacting the historic cattle-drive trail across Florida, from the Gulf Coast to the East Coast.

It’s the longest continuously used trail for transporting cattle in the country.

On Wednesday, they stopped off at Cracker Trail Elementary School, as usual, and officials there said the riders would demonstrate whip-cracking for the students, as they do each year.

This year differed as the riders stayed outside the school fence and neither they nor their horses had close contact with students, because of the COVID-19 pandemic.

After the school visit, the riders mounted up again and headed east down State Road 66 toward U.S. 27, to cross the highway and continue on U.S. 98. They reached U.S. 27 at 1 p.m. and crossed with traffic stopped by Highlands County sheriff’s deputies.

All along the route, Harrison said, they met “wonderful people.”

As always, the Florida Crack Trail Ride provides an education opportunity because many people do not know the history of a class of early Florida pioneers, mainly small farmers and cattle ranchers. The ride is both a reenactment and outreach.

This year seemed to have fewer participants than usual. Harrison had told the Highlands News-Sun that riding on 8- to 10-foot-long horses automatically provides a measure of social distancing, while the bandannas riders usually wear can double as face masks.

“We definitely wanted to get out,” Harrison said, echoing a sentiment many have felt and still feel since this last year, with the addition of being able to escape some of the noise of news and the world. “The pace slows down. It all stops. It gives you a lot more perspective.”

Harrison said riding less than 5 mph on the back of a horse lets a traveler see the sky, trees, flowers and birds not visible when driving 70 to 80 mph. He only wishes the week of the trail ride could last longer than it seems.

For those who have just begun to learn what he loves about the ride, he said they tend toward two types.

“It gets in you or it gets on you,” Harrison said, hoping more people get the ride “in them,” to ensure preservation of history for the future.

SEBRING — Highlands County commissioners took a look at the priorities list left to them by the previous commission and made some changes.

Key among their changes Tuesday was cutting the list from 10 items to eight and making some previous priorities into less-pressing projects.

The new list, in no particular order, includes a possible future sale of the Highlands Regional Medical Center building and property, mapping utilities in the county for economic growth and building up a 3.5-month reserve with a lower millage rate. It also includes reducing county bureaucracy, fixing the recycling program, addressing county-wide drainage issues, providing or lobbying for more septage processing and disposal sites, and working out the agreements and protocols between the county and municipalities for annexation and maintenance of facilities, such as sidewalks.

The last two items would need the county to work closer with local municipalities and improvement districts that have septic systems and provide other services that can take the load off the county.

Lake Placid Councilman Ray Royce said he would look forward to seeing county and town officials sit down for a “real conversation” on annexation and transfer of responsibilities.

“Annexation is not succession from the county. The municipality takes some stuff off your plate,” Royce said. “Always, it’s ‘us versus them,’ but we are all still county residents.”

HRMCCommissioners, especially Commissioner Kevin Roberts, said they don’t think the county needs to be in the business of owning a hospital anymore. It was built in 1965 and has been in the county’s hands ever since, leased by a number of hospital management companies.

County Administrator Randy Vosburg said legislation surrounding the creation of the hospital district within the county may dictate how the county can use any sale proceeds, which the previous county commission had hoped to use to set up a fund to support local charities.

HRMC is currently under lease to HCA Healthcare (Hospital Corporation of America), and CEO Jason L. Kimbrell said the hospital building is being leased from Highlands County through July 31, 2027.

“Over the past year,” Kimbrell said, “Highlands Regional Medical Center has been in communication with the county regarding the option to purchase the building, an investment that signals our long-term commitment to the community for which we are proud to serve.”

Utilities/sewersVosburg said Highlands County’s Economic Development Department wants to map all water/sewer utilities to know what areas are ready for development. Extensions of local utilities will help build economic development, he said. The county needs to have sewer lines extended from the nearest utility — the city of Sebring — to George Boulevard to help expand the Emergency Operations Center.

Sewer lines to that area would also allow businesses on U.S. 27 to grow, including Cowpoke’s Watering Hole restaurant and night spot. Vosburg said vacant land along U.S. 27, just south of State Road 66, has stayed vacant for decades because it’s not “site-ready” with water and sewer lines.

ReservesPrevious commissions have tried ever since the 2007-08 recession to rebuild the county’s reserves. They had built it up again by 2017, but had to tap it again after Hurricane Irma for debris removal and infrastructure repair, until reimbursement came in from the Federal Emergency Management Agency.

COVID-19 has been another “hiccup,” Vosburg said, though adding that Highlands County could receive a multi-million dollar stimulus to help with costs and losses incurred during the pandemic.

ProjectsCommissioners also spoke of creating shovel-ready and turnkey facilities for retail, office space and manufacturing, as well as how the Tourist Development Council (VisitSebring) is looking at using the third penny tourist tax to enhance existing facilities rather than go into building one big family-friendly venue now. VisitSebring CEO Casey Hartt said those funds can make facilities more conducive to hosting sporting events that have proven to be more COVID-resistant tourist draws.

Commissioners also discussed the question of a pet-friendly shelter. One built to suit would require separate rooms and air-conditioning for humans and animals, under Florida law, and is very expensive. However, Vosburg said the county can afford to expand kennels at Highlands County Animal Control to house animals during and after a storm.

Vosburg said, as with the homelessness situation, the county may need to form a community roundtable to discuss solutions.

Highland County added 30 new cases of people becoming infected with COVID-19 when the Florida Department of Health released its daily report on coronavirus data. The 30 new cases brings the overall tally to 6,997. Of those cases, 6,930 are residents and 67 are non-residents in the county.

The average daily new cases is moving in the right direction – down over the past few days. FDOH shows Highlands County has had 192 new virus cases over the past seven days. That’s a daily average of 27.42 cases per day. There was one new death added overnight, bringing the death toll from complications due to COVID-19 to 291 people. FDOH shows Highlands County had one additional death from either a staff member or a resident of a long-term health care facility and now stands at 79 deaths in all.

Speaking of moving in the right direction, the positivity rate has gone down for the second day in a row and was at 5.95%. The rate is from the combination of new cases and testing. Testing got a big boost at 487 tests processed. There were 458 negative results reported on Wednesday’s report.

Hospital admissions with COVID-19 symptoms as the main diagnosis remained at 552.

The Agency for Health Care Administration reported 32 people in the hospital as of 2:46 p.m. Wednesday, three less than Tuesday. AHCA also reported an adult ICU bed census at 20 with six available.

The daily average age of those infected with coronavirus was up slightly to 47 on Wednesday. The overall median age remains at 52. Cases from corrections remained at 116.

Statewide, the new case counts continue to rise as the week progresses. Wednesday saw 7,342 cases added to the cumulative total, which was 1,844,627. Of those cases, 1,811,078 were from residents and non-residents comprised the remaining 33,549 cases of infections.

The newly reported deaths increased by 163, which was down from the previous day. The overall death toll is 29,822.

Numbers remained down across the United States, as the country saw just 56,312 new cases reported, according to the COVID Tracking Project’s Tuesday night report. Deaths remained lower, with 1,353 reported, which is nearly 1,000 fewer than the seven-day rolling average, and the fewest number of deaths reported on a Tuesday since Nov. 3.

Early numbers on Wednesday indicate the figures may not be quite as good, as California reported just 4,090 new cases, but 400 deaths, and Arizona, which reported three deaths for the two previous days combined, showed an increase of 1,315 new cases and 82 deaths, which pushes the state past 800,000 cases and 15,000 deaths.

According to the Johns Hopkins University Center for Systems Science and Engineering, the U.S. has seen a total of 27.8 million cases and had 489,221 deaths.