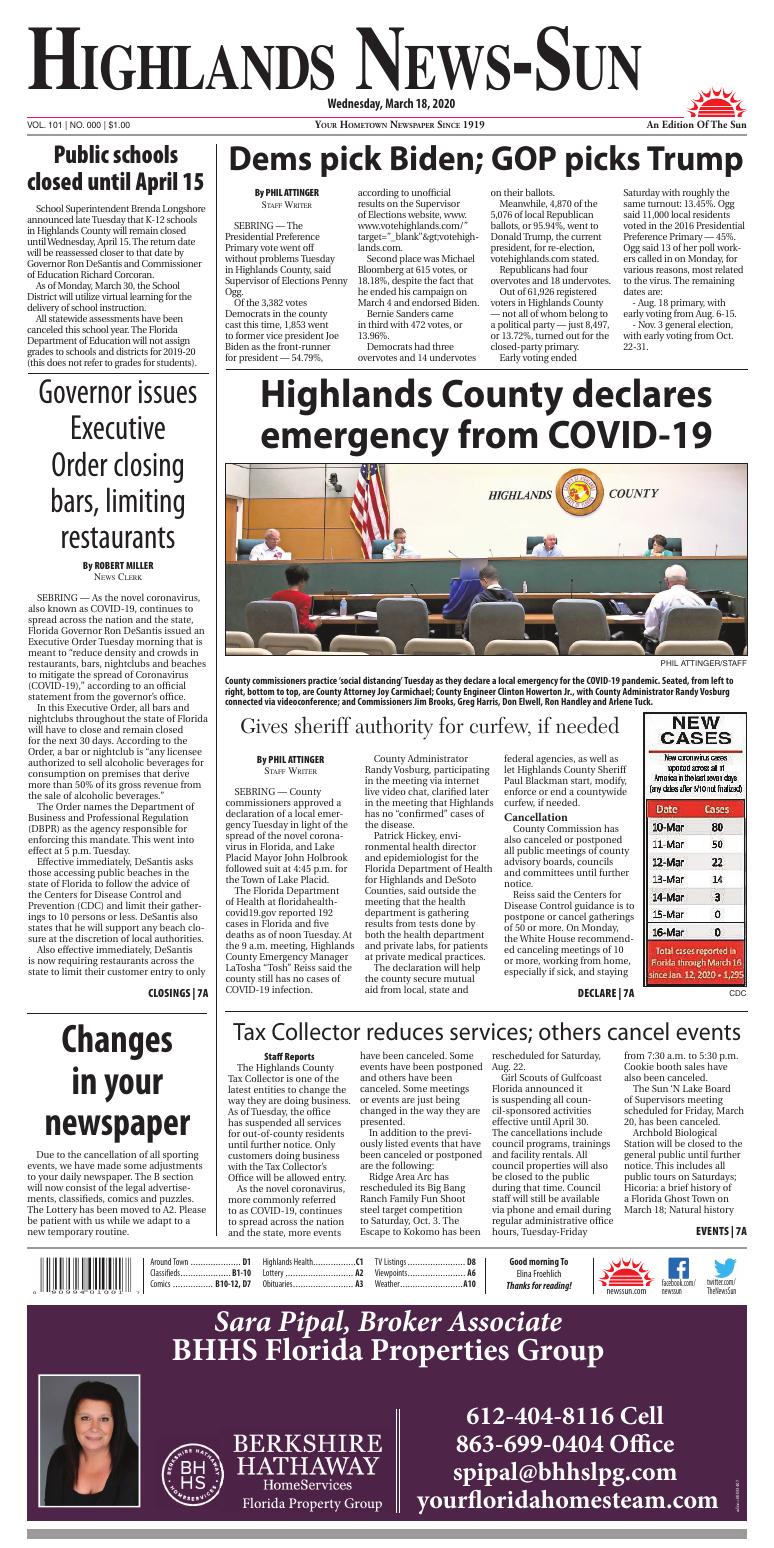 Of the 3,382 votes Democrats in the county cast this time, 1,853 went to former vice president Joe Biden as the front-runner for president — 54.79%, according to unofficial results on the Supervisor of Elections website, www.www.votehighlands.com/” target=”_blank”>votehighlands.com.

Second place was Michael Bloomberg at 615 votes, or 18.18%, despite the fact that he ended his campaign on March 4 and endorsed Biden.

Democrats had three overvotes and 14 undervotes on their ballots.

Meanwhile, 4,870 of the 5,076 of local Republican ballots, or 95.94%, went to Donald Trump, the current president, for re-election, votehighlands.com stated.

Republicans had four overvotes and 18 undervotes.

Reports Tuesday said many counties had poll workers not show up because of the novel coronavirus pandemic. Ogg said 13 of her poll workers called in on Monday, for various reasons, most related to the virus.

Some were called into their jobs because of worker shortages. Some felt sick, Ogg said, and others with health conditions worried about getting sick. Some, Ogg said, simply felt uncomfortable being in the public right now.

Still, Ogg said she didn’t have any “no-shows:” Everyone either called in or showed up.

Voting rights activists, concerned about people not being able to reach the polls because of disruptions caused by the pandemic, had asked state officials to extend early voting into this week, as other states had done.

However, Florida state officials kept the original schedule. The remaining dates are:

A notice on the door of Highlands County Board of County Commission chambers instructs attendees at Tuesday’s commission meeting to sit four seats apart to maintain ‘social distancing’ .

SEBRING — County commissioners approved a declaration of a local emergency Tuesday in light of the spread of the novel coronavirus in Florida, and Lake Placid Mayor John Holbrook followed suit at 4:45 p.m. for the Town of Lake Placid.

The Florida Department of Health at floridahealthcovid19.gov reported 192 cases in Florida and five deaths as of noon Tuesday. At the 9 a.m. meeting, Highlands County Emergency Manager LaTosha “Tosh” Reiss said the county still has no cases of COVID-19 infection.

County Administrator Randy Vosburg, participating in the meeting via internet live video chat, clarified later in the meeting that Highlands has no “confirmed” cases of the disease.

Patrick Hickey, environmental health director and epidemiologist for the Florida Department of Health for Highlands and DeSoto Counties, said outside the meeting that the health department is gathering results from tests done by both the health department and private labs, for patients at private medical practices.

County Commission has also canceled or postponed all public meetings of county advisory boards, councils and committees until further notice.

Reiss said the Centers for Disease Control guidance is to postpone or cancel gatherings of 50 or more. On Monday, the White House recommended canceling meetings of 10 or more, working from home, especially if sick, and staying out of the public as much as possible.

This has to do with “flattening the curve,” she said, referring to graphs of the number of possible cases without self-isolation versus a lower number with isolation.

“We don’t want to overwhelm local resources and our local hospital, and that’s what everybody is trying to keep from happening,” Reiss said. “What we ultimately want is to make it through this and everybody say, ‘Oh, they were making it worse than it was.’ That’s what we’re wanting to come out of this, because then we’ve done our job.”

A notice outside the meeting asked to leave at least four seats between each other. Commissioners had spread out on the dais to the extent that Commissioner Jim Brooks and County Attorney Joy Carmichael sat at the staff positions below on the main floor.

A Highlands County sheriff’s deputy kept tabs on the number of people who had entered, and overflow seating had been set up in the lobby in front of a monitor, with chairs spaced three to five feet apart.

Originally, the resolution stated that any member of the board could extend the emergency declaration. Carmichael said it would prevent the county being hampered if one or more of them got sick.

Commissioners voted instead to require a majority vote of the board for an extension, even if it meant doing so via conference call.

Florida officials followed with a declaration of public health emergency on March 2, activation of the Florida Emergency Operations Center on March 7 and an executive order from Gov. Ron DeSantis on March 9 declaring a state of emergency in Florida.

With the local declaration, the Highlands County Emergency Operations Center is on a Level 2 alert, but Public Information Officer Gloria Rybinski said this differs from a hurricane or other natural disaster: The Florida Department of Health is the lead agency and the primary source for updates.

The declaration removes many of the formalities for the county to spend public funds, enter into contracts or obligations to outside entities, hiring temporary employees or volunteers, renting equipment and also acquiring and distributing materials and supplies.

The Highlands County Tax Collector is one of the latest entities to change the way they are doing business. As of Tuesday, the office has suspended all services for out-of-county residents until further notice. Only customers doing business with the Tax Collector’s Office will be allowed entry.

In addition to the previously listed events that have been canceled or postponed are the following:

School Superintendent Brenda Longshore announced late Tuesday that K-12 schools in Highlands County will remain closed until Wednesday, April 15. The return date will be reassessed closer to that date by Governor Ron DeSantis and Commissioner of Education Richard Corcoran.

As of Monday, March 30, the School District will utilize virtual learning for the delivery of school instruction.

All statewide assessments have been canceled this school year. The Florida Department of Education will not assign grades to schools and districts for 2019-20 (this does not refer to grades for students).

SEBRING — As the novel coronavirus, also known as COVID-19, continues to spread across the nation and the state, Florida Governor Ron DeSantis issued an Executive Order Tuesday morning that is meant to “reduce density and crowds in restaurants, bars, nightclubs and beaches to mitigate the spread of Coronavirus (COVID-19),” according to an official statement from the governor’s office.

In this Executive Order, all bars and nightclubs throughout the state of Florida will have to close and remain closed for the next 30 days. According to the Order, a bar or nightclub is “any licensee authorized to sell alcoholic beverages for consumption on premises that derive more than 50% of its gross revenue from the sale of alcoholic beverages.”

The Order names the Department of Business and Professional Regulation (DBPR) as the agency responsible for enforcing this mandate. This went into effect at 5 p.m. Tuesday.

Effective immediately, DeSantis asks those accessing public beaches in the state of Florida to follow the advice of the Centers for Disease Control and Prevention (CDC) and limit their gatherings to 10 persons or less. DeSantis also states that he will support any beach closure at the discretion of local authorities.

Also effective immediately, DeSantis is now requiring restaurants across the state to limit their customer entry to only 50% of their capacity. This includes, in accordance with CDC guidelines, that seating be staggered and limited to keep parties at least six feet apart from each other. While restaurants are encouraged to remain open, they are also asked to expand take-out and delivery services.

The DBPR will be in charge of making sure that restaurants follow these guidelines. Every restaurant employee will have to be screened and any employee found to be infected, will not be allowed back to work until they have “had two consecutive negative tests separated by 24 hours,” the Executive Order said.

The Executive Order will expire in 30 days unless it is extended.

Due to the cancellation of all sporting events, we have made some adjustments to your daily newspaper. The B section will now consist of the legal advertisements, classifieds, comics and puzzles. The Lottery has been moved to A2. Please be patient with us while we adapt to a new temporary routine. 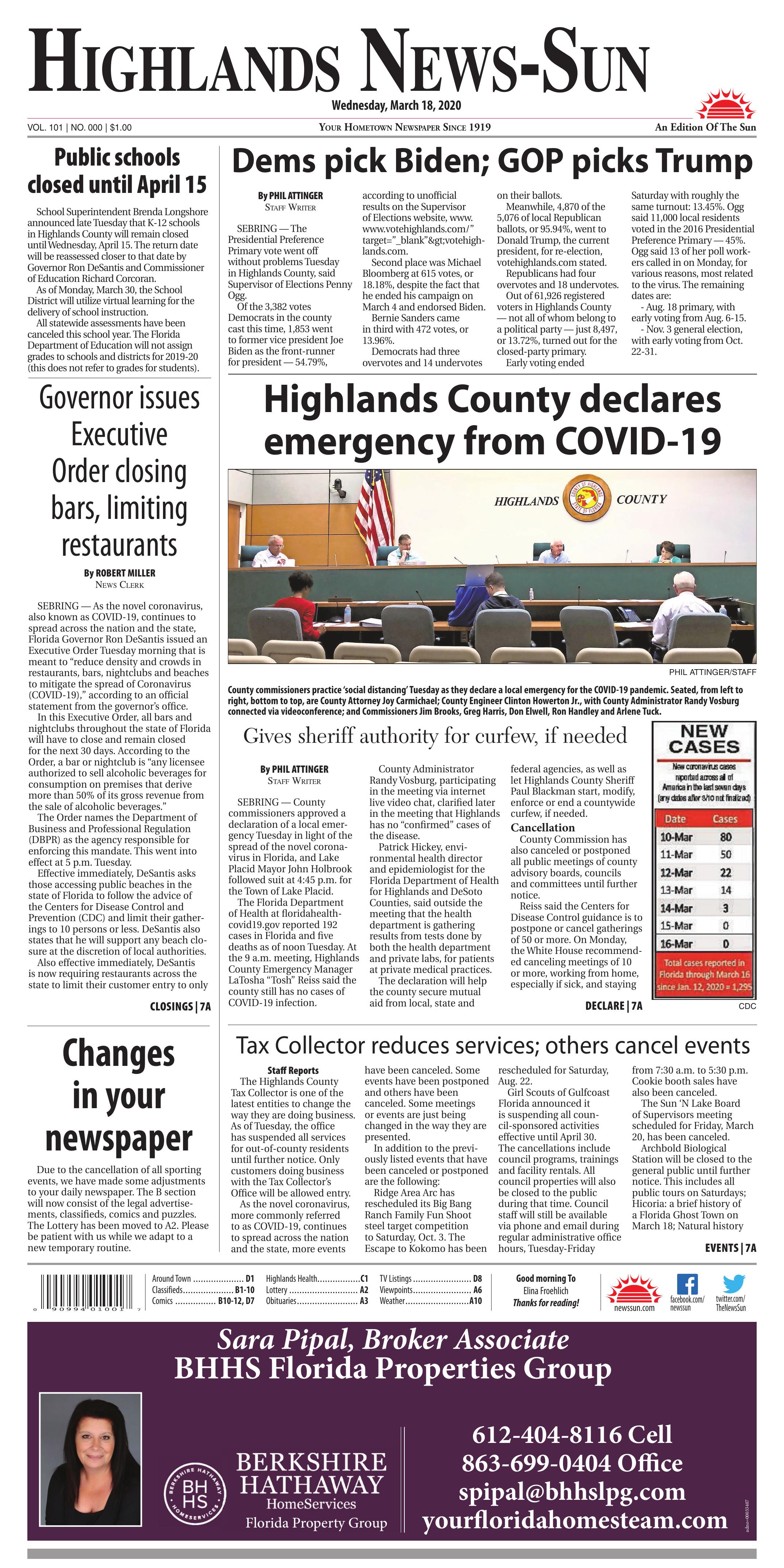