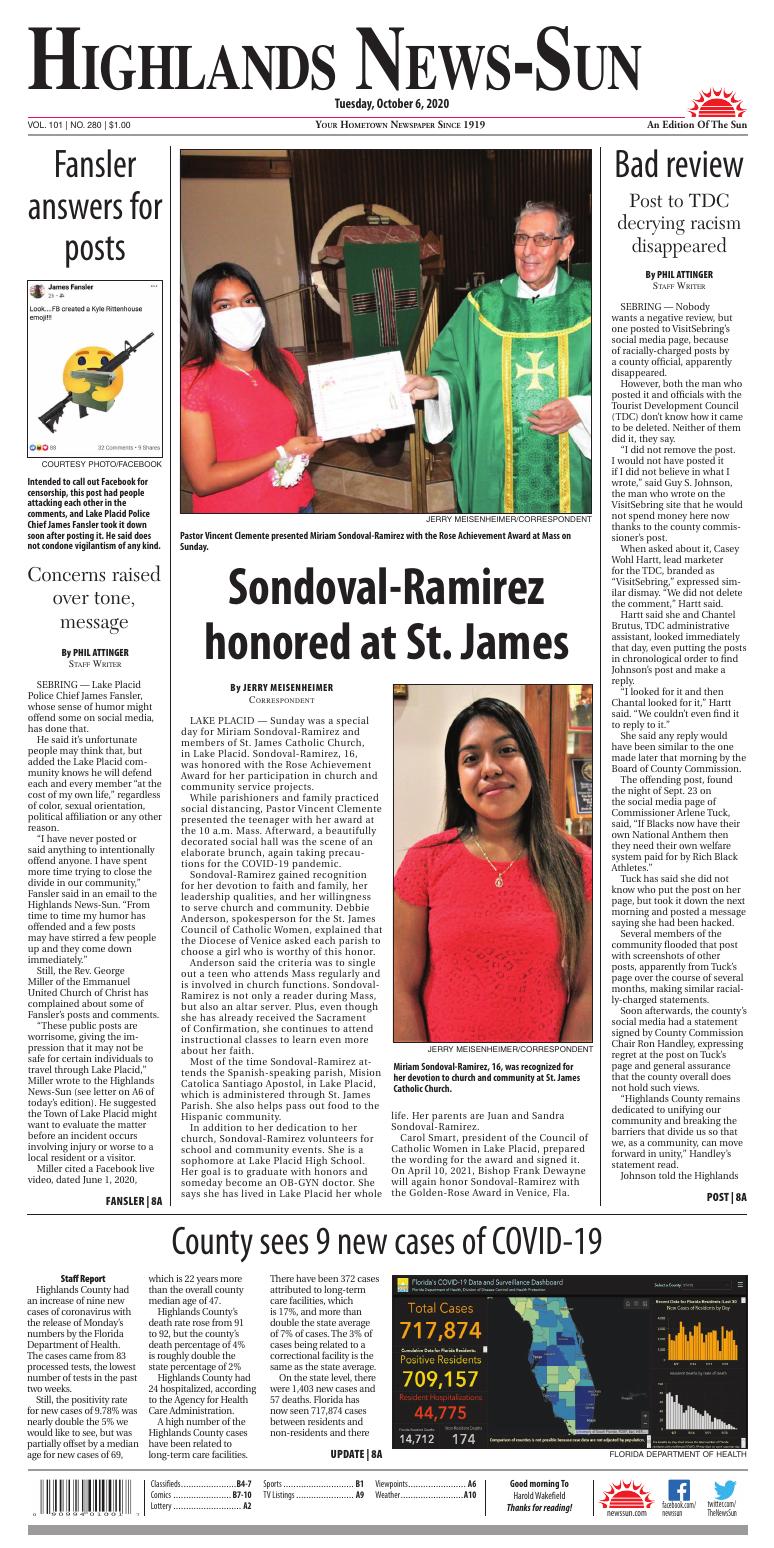 Miriam Sondoval-Ramirez, 16, was recognized for her devotion to church and community at St. James Catholic Church.

LAKE PLACID — Sunday was a special day for Miriam Sondoval-Ramirez and members of St. James Catholic Church, in Lake Placid. Sondoval-Ramirez, 16, was honored with the Rose Achievement Award for her participation in church and community service projects.

While parishioners and family practiced social distancing, Pastor Vincent Clemente presented the teenager with her award at the 10 a.m. Mass. Afterward, a beautifully decorated social hall was the scene of an elaborate brunch, again taking precautions for the COVID-19 pandemic.

Sondoval-Ramirez gained recognition for her devotion to faith and family, her leadership qualities, and her willingness to serve church and community. Debbie Anderson, spokesperson for the St. James Council of Catholic Women, explained that the Diocese of Venice asked each parish to choose a girl who is worthy of this honor.

Anderson said the criteria was to single out a teen who attends Mass regularly and is involved in church functions. Sondoval-Ramirez is not only a reader during Mass, but also an altar server. Plus, even though she has already received the Sacrament of Confirmation, she continues to attend instructional classes to learn even more about her faith.

Most of the time Sondoval-Ramirez attends the Spanish-speaking parish, Mision Catolica Santiago Apostol, in Lake Placid, which is administered through St. James Parish. She also helps pass out food to the Hispanic community.

In addition to her dedication to her church, Sondoval-Ramirez volunteers for school and community events. She is a sophomore at Lake Placid High School. Her goal is to graduate with honors and someday become an OB-GYN doctor. She says she has lived in Lake Placid her whole life. Her parents are Juan and Sandra Sondoval-Ramirez.

Carol Smart, president of the Council of Catholic Women in Lake Placid, prepared the wording for the award and signed it. On April 10, 2021, Bishop Frank Dewayne will again honor Sondoval-Ramirez with the Golden-Rose Award in Venice, Fla.

Highlands County had 24 hospitalized, according to the Agency for Health Care Administration.

On the state level, there were 1,403 new cases and 57 deaths. Florida has now seen 717,874 cases between residents and non-residents and there have been 14,712 resident deaths and 174 deaths in non-residents. According to worldometers.com – whose data is used by the New York Times, BBC, Johns Hopkins University Center for Systems Science and Engineering, and others – Florida was No. 12 among states in deaths per million residents, with 685. New Jersey and New York both have seen more than 1,700 deaths per million residents.

Lake Placid Police Chief James Fansler, in a recent social media post, reminds his friends and followers that he his sense of humor might offend, but he will protect and serve each person equally.

Intended to call out Facebook for censorship, this post had people attacking each other in the comments, and Lake Placid Police Chief James Fansler took it down soon after posting it. He said does not condone vigilantism of any kind.

SEBRING — Lake Placid Police Chief James Fansler, whose sense of humor might offend some on social media, has done that.

He said it’s unfortunate people may think that, but added the Lake Placid community knows he will defend each and every member “at the cost of my own life,” regardless of color, sexual orientation, political affiliation or any other reason.

“I have never posted or said anything to intentionally offend anyone. I have spent more time trying to close the divide in our community,” Fansler said in an email to the Highlands News-Sun. “From time to time my humor has offended and a few posts may have stirred a few people up and they come down immediately.”

Still, the Rev. George Miller of the Emmanuel United Church of Christ has complained about some of Fansler’s posts and comments.

“These public posts are worrisome, giving the impression that it may not be safe for certain individuals to travel through Lake Placid,” Miller wrote to the Highlands News-Sun (see letter on A6 of today’s edition). He suggested the Town of Lake Placid might want to evaluate the matter before an incident occurs involving injury or worse to a local resident or a visitor.

Miller cited a Facebook live video, dated June 1, 2020, in which Fansler said residents had the right, under Florida’s “Stand Your Ground” law, to defend their homes and property and also said they should be cautious about “blasting first” and questioning later. Speaking to rumors at the time of riots, Fansler said, “You know full well that I’ll make you fully aware of it immediately so that you can be well prepared to help me, and I know there are several of you who are well prepared to jump in your vehicles at the beck and call and will be here immediately.”

Miller then referenced other posts and comments that seemed to suggest the same sentiment, including support for Kyle Rittenhouse, the 17-year-old from Antioch, Illinois, accused of two homicides during unrest in Kenosha, Wisconsin. Fansler has posted “support for Rittenhouse” as well as an image of a smiley embracing a semi-automatic rifle and an ammunition box, calling it a Facebook emoji for Rittenhouse.

One woman commented that she would defend herself and wouldn’t walk down a city street at age 17 with a weapon when trouble had not come to her. Fansler commented that at 17 he would have done that “and my mom would not have been able to stop me.”

“Many stated they would come to defend their property if necessary. I have strongly recommended against that,” Fansler wrote in an email. “I was only acknowledging their willingness to help.” Fansler said he did not request their assistance nor indicate he would allow dangerous activity.

“[As a] matter of fact, at the end of the video I told folks to stay home and let us (law enforcement) take care of any issues,” Fansler wrote.

As for the Rittenhouse matter, Fansler said it was satire on Facebook censorship, but he deleted the posts after some began attacking anyone who commented on it.

“Deciding it wasn’t a post worth seeing people get attacked over, and seeing how they were twisting the context, it was deleted,” Fansler wrote.

In another thread, a woman asked what to do if a protester stopped her car on the road. Fansler said law enforcement can’t advise people to “run over the SOBs” as someone had suggested, but he said he would do that to get to safety if he felt his family was threatened. People have been attacked in their own vehicles by violent groups across the country, at surface-street intersections and on interstates, Fansler said.

“People wanted to know what to do. I could never suggest someone simply allow themselves to be a victim and let them or their families be brutally attacked,” Fansler said. He cited Governor Ron DeSantis, who said on Sept. 21, it is a third-degree felony to obstruct traffic during an unpermitted protest, demonstration or violent or disorderly assembly, and a driver would not be liable for injury or death caused if fleeing for safety from a mob.

SEBRING — Nobody wants a negative review, but one posted to VisitSebring’s social media page, because of racially-charged posts by a county official, apparently disappeared.

However, both the man who posted it and officials with the Tourist Development Council (TDC) don’t know how it came to be deleted. Neither of them did it, they say.

“I did not remove the post. I would not have posted it if I did not believe in what I wrote,” said Guy S. Johnson, the man who wrote on the VisitSebring site that he would not spend money here now thanks to the county commissioner’s post.

When asked about it, Casey Wohl Hartt, lead marketer for the TDC, branded as “VisitSebring,” expressed similar dismay. “We did not delete the comment,” Hartt said.

Hartt said she and Chantel Brutus, TDC administrative assistant, looked immediately that day, even putting the posts in chronological order to find Johnson’s post and make a reply.

She said any reply would have been similar to the one made later that morning by the Board of County Commission.

The offending post, found the night of Sept. 23 on the social media page of Commissioner Arlene Tuck, said, “If Blacks now have their own National Anthem then they need their own welfare system paid for by Rich Black Athletes.”

Tuck has said she did not know who put the post on her page, but took it down the next morning and posted a message saying she had been hacked.

Several members of the community flooded that post with screenshots of other posts, apparently from Tuck’s page over the course of several months, making similar racially-charged statements.

Soon afterwards, the county’s social media had a statement signed by County Commission Chair Ron Handley, expressing regret at the post on Tuck’s page and general assurance that the county overall does not hold such views.

“Highlands County remains dedicated to unifying our community and breaking the barriers that divide us so that we, as a community, can move forward in unity,” Handley’s statement read.

Johnson told the Highlands News-Sun that the post on Tuck’s page could still hurt tourism, even now.

“I understand that a local Convention and Visitor’s Bureau needs to understand why people won’t visit their location, and why potential visitors will spread their uncertainty amongst their social and professional networks,” Johnson told the Highlands News-Sun via a private social media message.

“Visitors can be a blessing or a curse, and because I hold membership in multiple social and professional networking groups, as well as having several friends and relatives who work in the meeting planning arena, we are always looking for new and unusual places to hold meetings and gatherings,” Johnson said.

He and others in the meeting/planning field want to help small communities boost their local economy, he said, and he had heard of some of the economic issues hitting the county, and would love to assist the local economy.

“Ms. Tuck’s, and other local officials’ statements and lack of action, have made me less likely to act in that manner,” Johnson said.

When asked if some other county official might have had access to the page and may have deleted it, Hartt didn’t know who that could be.

“I don’t know of anyone who has done anything with our page,” Hartt said.

Meanwhile, the County Commission meets again today (Tuesday), and the agenda doesn’t have any specific item on it addressing this issue.

Citizens are allowed to bring up items for discussion that are not on the agenda, by filling out forms prior to the start of the meeting and submitting them to the clerk’s office representative on the dais.