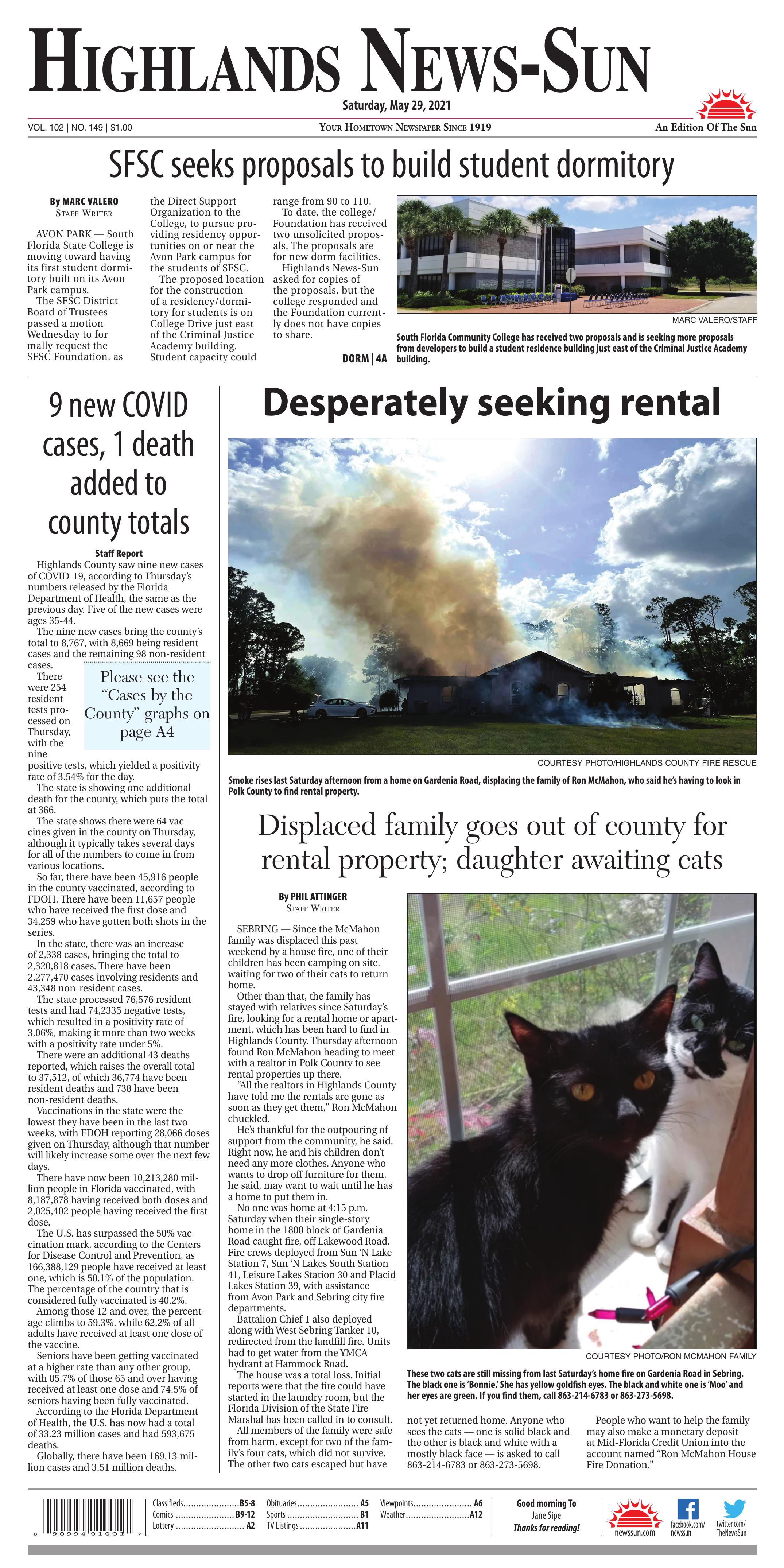 AVON PARK — South Florida State College is moving toward having its first student dormitory built on its Avon Park campus.

The SFSC District Board of Trustees passed a motion Wednesday to formally request the SFSC Foundation, as the Direct Support Organization to the College, to pursue providing residency opportunities on or near the Avon Park campus for the students of SFSC.

The proposed location for the construction of a residency/dormitory for students is on College Drive just east of the Criminal Justice Academy building. Student capacity could range from 90 to 110.

To date, the college/Foundation has received two unsolicited proposals. The proposals are for new dorm facilities.

Highlands News-Sun asked for copies of the proposals, but the college responded and the Foundation currently does not have copies to share.

The original copies were given to the college board members. Once the college or Foundation receives proposals, they become the property of the college/Foundation and are technically open to public record, according to SFSC. However, the Foundation does not have copies to share at this point.

The Foundation is in the process of requesting more, to include the two that were previously submitted.

The Foundation did not prepare an request for proposal, but they did prepare an informational document indicating they have previously received two unsolicited proposals and asking if any other developers would like the opportunity to propose their ideas or plans for this project.

A committee was formed to review the dormitory proposals comprised of four members of the Foundation board and three members representing the District Board of Trustees.

At the Trustees meeting it was noted that under the current timeline construction could start in December.

Smoke rises last Saturday afternoon from a home on Gardenia Road, displacing the family of Ron McMahon, who said he’s having to look in Polk County to find rental property.

Hailey McMahon and Anthony Hernandez are keeping vigil over the McMahon house after a fire gutted the structure on Saturday. They are also on hand to welcome home two missing family pets that escaped the blaze but are still missing.

SEBRING — Since the McMahon family was displaced this past weekend by a house fire, one of their children has been camping on site, waiting for two of their cats to return home.

Other than that, the family has stayed with relatives since Saturday’s fire, looking for a rental home or apartment, which has been hard to find in Highlands County. Thursday afternoon found Ron McMahon heading to meet with a realtor in Polk County to see rental properties up there.

“All the realtors in Highlands County have told me the rentals are gone as soon as they get them,” Ron McMahon chuckled.

He’s thankful for the outpouring of support from the community, he said. Right now, he and his children don’t need any more clothes. Anyone who wants to drop off furniture for them, he said, may want to wait until he has a home to put them in.

Battalion Chief 1 also deployed along with West Sebring Tanker 10, redirected from the landfill fire. Units had to get water from the YMCA hydrant at Hammock Road.

The house was a total loss. Initial reports were that the fire could have started in the laundry room, but the Florida Division of the State Fire Marshal has been called in to consult.

All members of the family were safe from harm, except for two of the family’s four cats, which did not survive. The other two cats escaped but have not yet returned home. Anyone who sees the cats — one is solid black and the other is black and white with a mostly black face — is asked to call 863-214-6783 or 863-273-5698.

People who want to help the family may also make a monetary deposit at Mid-Florida Credit Union into the account named “Ron McMahon House Fire Donation.”

Highlands County saw nine new cases of COVID-19, according to Thursday’s numbers released by the Florida Department of Health, the same as the previous day. Five of the new cases were ages 35-44.

The nine new cases bring the county’s total to 8,767, with 8,669 being resident cases and the remaining 98 non-resident cases.

There were 254 resident tests processed on Thursday, with the nine positive tests, which yielded a positivity rate of 3.54% for the day.

The state is showing one additional death for the county, which puts the total at 366.

The state shows there were 64 vaccines given in the county on Thursday, although it typically takes several days for all of the numbers to come in from various locations.

So far, there have been 45,916 people in the county vaccinated, according to FDOH. There have been 11,657 people who have received the first dose and 34,259 who have gotten both shots in the series.

Vaccinations in the state were the lowest they have been in the last two weeks, with FDOH reporting 28,066 doses given on Thursday, although that number will likely increase some over the next few days.

The U.S. has surpassed the 50% vaccination mark, according to the Centers for Disease Control and Prevention, as 166,388,129 people have received at least one, which is 50.1% of the population. The percentage of the country that is considered fully vaccinated is 40.2%.

Among those 12 and over, the percentage climbs to 59.3%, while 62.2% of all adults have received at least one dose of the vaccine.

Seniors have been getting vaccinated at a higher rate than any other group, with 85.7% of those 65 and over having received at least one dose and 74.5% of seniors having been fully vaccinated.