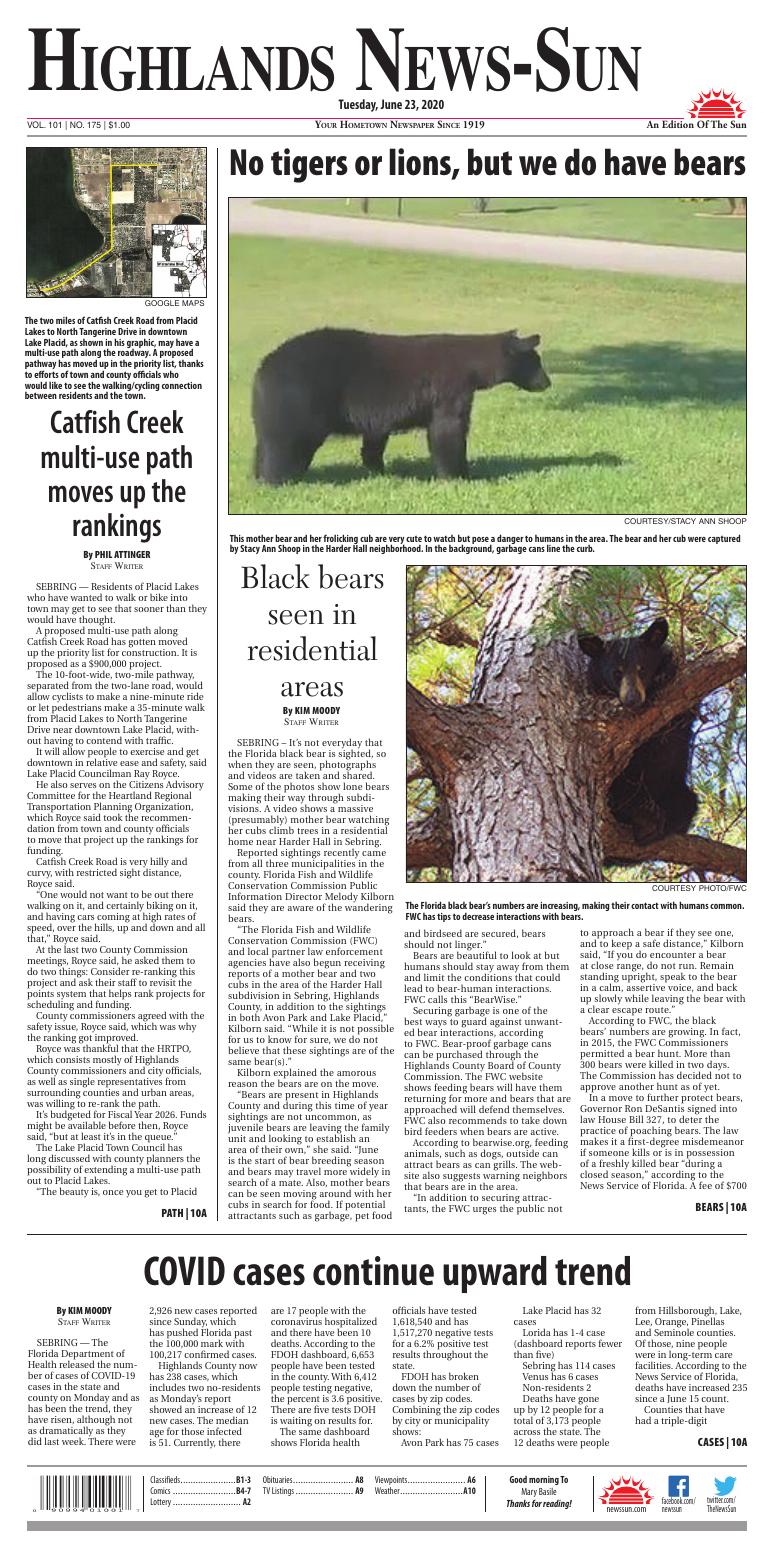 Highlands_news-sun
No tigers or lions, but we have bears
By KIM MOODY Staff Writer

The Florida black bear’s numbers are increasing, making their contact with humans common. FWC has tips to decrease interactions with bears.

This mother bear and her frolicking cub are very cute to watch but pose a danger to humans in the area. The bear and her cub were captured by Stacy Ann Shoop in the Harder Hall neighborhood. In the background, garbage cans line the curb.

This graph represents the percentage of bear interactions that are reported to the Florida Fish and Wildlife Conservation Commission.

SEBRING – It’s not everyday that the Florida black bear is sighted, so when they are seen, photographs and videos are taken and shared. Some of the photos show lone bears making their way through subdivisions. A video shows a massive (presumably) mother bear watching her cubs climb trees in a residential home near Harder Hall in Sebring.

Reported sightings recently came from all three municipalities in the county. Florida Fish and Wildlife Conservation Commission Public Information Director Melody Kilborn said they are aware of the wandering bears.

“The Florida Fish and Wildlife Conservation Commission (FWC) and local partner law enforcement agencies have also begun receiving reports of a mother bear and two cubs in the area of the Harder Hall subdivision in Sebring, Highlands County, in addition to the sightings in both Avon Park and Lake Placid,” Kilborn said. “While it is not possible for us to know for sure, we do not believe that these sightings are of the same bear(s).”

Kilborn explained the amorous reason the bears are on the move.

“Bears are present in Highlands County and during this time of year sightings are not uncommon, as juvenile bears are leaving the family unit and looking to establish an area of their own,” she said. “June is the start of bear breeding season and bears may travel more widely in search of a mate. Also, mother bears can be seen moving around with her cubs in search for food. If potential attractants such as garbage, pet food and birdseed are secured, bears should not linger.”

Bears are beautiful to look at but humans should stay away from them and limit the conditions that could lead to bear-human interactions. FWC calls this “BearWise.”

Securing garbage is one of the best ways to guard against unwanted bear interactions, according to FWC. Bear-proof garbage cans can be purchased through the Highlands County Board of County Commission. The FWC website shows feeding bears will have them returning for more and bears that are approached will defend themselves. FWC also recommends to take down bird feeders when bears are active.

According to bearwise.org, feeding animals, such as dogs, outside can attract bears as can grills. The website also suggests warning neighbors that bears are in the area.

“In addition to securing attractants, the FWC urges the public not to approach a bear if they see one, and to keep a safe distance,” Kilborn said, “If you do encounter a bear at close range, do not run. Remain standing upright, speak to the bear in a calm, assertive voice, and back up slowly while leaving the bear with a clear escape route.”

According to FWC, the black bears’ numbers are growing. In fact, in 2015, the FWC Commissioners permitted a bear hunt. More than 300 bears were killed in two days. The Commission has decided not to approve another hunt as of yet.

In a move to further protect bears, Governor Ron DeSantis signed into law House Bill 327, to deter the practice of poaching bears. The law makes it a first-degree misdemeanor if someone kills or is in possession of a freshly killed bear “during a closed season,” according to the News Service of Florida. A fee of $700 and suspension of FWC hunting licenses could be additional consequences. The law will go into effect on July 1.

For more information about the Florida black bear, visit MyFWC.com/Bear.

A breakdown of the positive coronavirus cases in Highlands County as of Monday, June 22, according to the Florida Department of Health.

SEBRING — The Florida Department of Health released the number of cases of COVID-19 cases in the state and county on Monday and as has been the trend, they have risen, although not as dramatically as they did last week. There were 2,926 new cases reported since Sunday, which has pushed Florida past the 100,000 mark with 100,217 confirmed cases.

Highlands County now has 238 cases, which includes two no-residents as Monday’s report showed an increase of 12 new cases. The median age for those infected is 51. Currently, there are 17 people with the coronavirus hospitalized and there have been 10 deaths. According to the FDOH dashboard, 6,653 people have been tested in the county. With 6,412 people testing negative, the percent is 3.6 positive. There are five tests DOH is waiting on results for.

The same dashboard shows Florida health officials have tested 1,618,540 and has 1,517,270 negative tests for a 6.2% positive test results throughout the state.

FDOH has broken down the number of cases by zip codes. Combining the zip codes by city or municipality shows:

Deaths have gone up by 12 people for a total of 3,173 people across the state. The 12 deaths were people from Hillsborough, Lake, Lee, Orange, Pinellas and Seminole counties. Of those, nine people were in long-term care facilities. According to the News Service of Florida, deaths have increased 235 since a June 15 count.

In neighboring counties, the increased positive cases were not as astronomical, Hardee County increased 16, DeSoto rose 18, Okeechobee added five and Glades County remained at 142 after a jump of 21 on Sunday.

The two miles of Catfish Creek Road from Placid Lakes to North Tangerine Drive in downtown Lake Placid, as shown in his graphic, may have a multi-use path along the roadway. A proposed pathway has moved up in the priority list, thanks to efforts of town and county officials who would like to see the walking/cycling connection between residents and the town.

SEBRING — Residents of Placid Lakes who have wanted to walk or bike into town may get to see that sooner than they would have thought.

A proposed multi-use path along Catfish Creek Road has gotten moved up the priority list for construction. It is proposed as a $900,000 project.

The 10-foot-wide, two-mile pathway, separated from the two-lane road, would allow cyclists to make a nine-minute ride or let pedestrians make a 35-minute walk from Placid Lakes to North Tangerine Drive near downtown Lake Placid, without having to contend with traffic.

It will allow people to exercise and get downtown in relative ease and safety, said Lake Placid Councilman Ray Royce.

He also serves on the Citizens Advisory Committee for the Heartland Regional Transportation Planning Organization, which Royce said took the recommendation from town and county officials to move that project up the rankings for funding.

“One would not want to be out there walking on it, and certainly biking on it, and having cars coming at high rates of speed, over the hills, up and down and all that,” Royce said.

At the last two County Commission meetings, Royce said, he asked them to do two things: Consider re-ranking this project and ask their staff to revisit the points system that helps rank projects for scheduling and funding.

County commissioners agreed with the safety issue, Royce said, which was why the ranking got improved.

Royce was thankful that the HRTPO, which consists mostly of Highlands County commissioners and city officials, as well as single representatives from surrounding counties and urban areas, was willing to re-rank the path.

It’s budgeted for Fiscal Year 2026. Funds might be available before then, Royce said, “but at least it’s in the queue.”

The Lake Placid Town Council has long discussed with county planners the possibility of extending a multi-use path out to Placid Lakes.

“The beauty is, once you get to Placid Lakes, they’ve got a very nice multi-use path that runs the entire north-south length of Placid Lakes,” Royce said.

That and roads in the subdivision provide access to Lake June State Park. With a pathway, thousands of people in that subdivision could access the town’s ballfield and Devane Park, and they have the ability already to access State Road 70.

“Some of the residents along Catfish Creek Road have stated that they are willing to put some private resources into helping leverage that pathway,” Royce said.

It seems the county has done a good job of connecting residents with recreation via pathways in the Sebring and Avon Park area, Royce said, and he was glad to see efforts moving forward on similar paths in Lake Placid.

Eventually, he said, there are hopes to have a pathway network that would take people all around Lake Placid.

It may draw visitors, he said, because when he visits an area that has a good pathway system, “even an old, out of shape guy, like me, takes advantage of it.”

He wouldn’t be willing to do that in a place where he has to walk alongside a busy road and have to step off into high grass and weeds anytime a car approaches. 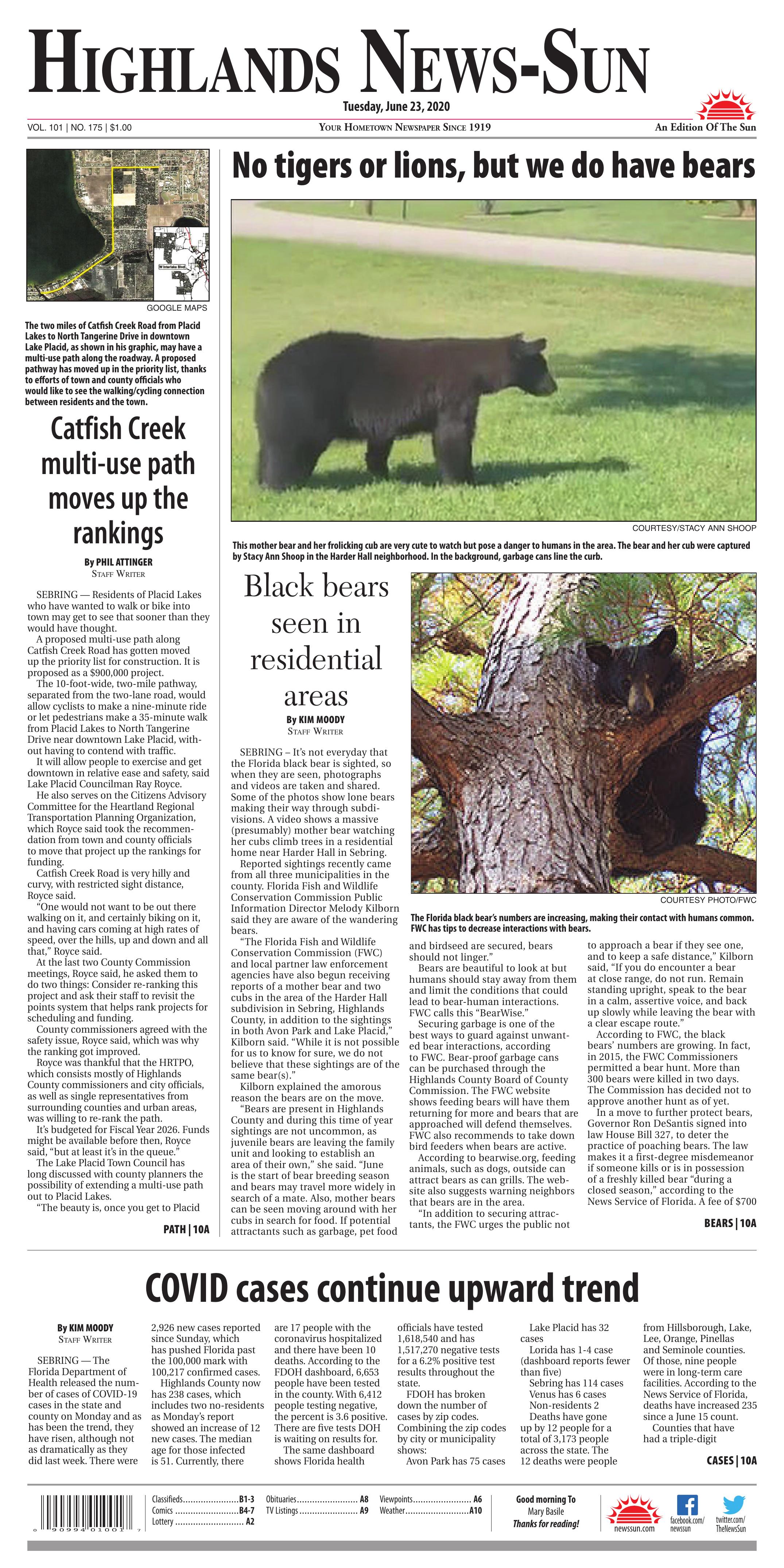