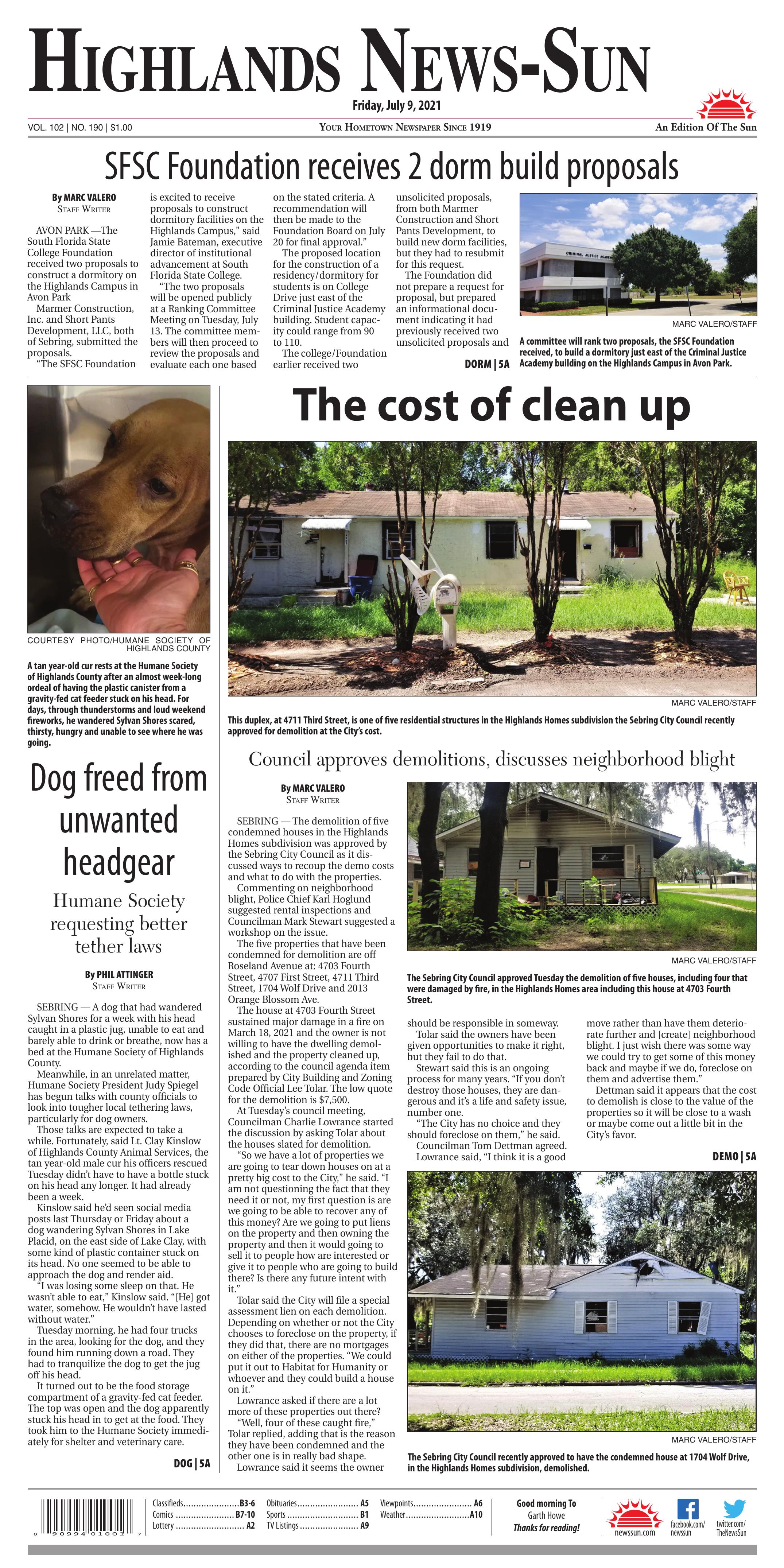 A committee will rank two proposals, the SFSC Foundation received, to build a dormitory just east of the Criminal Justice Academy building on the Highlands Campus in Avon Park.

“The two proposals will be opened publicly at a Ranking Committee Meeting on Tuesday, July 13. The committee members will then proceed to review the proposals and evaluate each one based on the stated criteria. A recommendation will then be made to the Foundation Board on July 20 for final approval.”

The proposed location for the construction of a residency/dormitory for students is on College Drive just east of the Criminal Justice Academy building. Student capacity could range from 90 to 110.

The college/Foundation earlier received two unsolicited proposals, from both Marmer Construction and Short Pants Development, to build new dorm facilities, but they had to resubmit for this request.

The Foundation did not prepare a request for proposal, but prepared an informational document indicating it had previously received two unsolicited proposals and asked if any other developers would like the opportunity to propose their ideas or plans for the project.

A committee was formed to review the dormitory proposals comprised of four members of the Foundation board and three members representing the District Board of Trustees.

The Sebring City Council approved Tuesday the demolition of five houses, including four that were damaged by fire, in the Highlands Homes area including this house at 4703 Fourth Street.

This duplex, at 4711 Third Street, is one of five residential structures in the Highlands Homes subdivision the Sebring City Council recently approved for demolition at the City’s cost.

The Sebring City Council recently approved to have the condemned house at 1704 Wolf Drive, in the Highlands Homes subdivision, demolished.

SEBRING — The demolition of five condemned houses in the Highlands Homes subdivision was approved by the Sebring City Council as it discussed ways to recoup the demo costs and what to do with the properties.

The five properties that have been condemned for demolition are off Roseland Avenue at: 4703 Fourth Street, 4707 First Street, 4711 Third Street, 1704 Wolf Drive and 2013 Orange Blossom Ave.

The house at 4703 Fourth Street sustained major damage in a fire on March 18, 2021 and the owner is not willing to have the dwelling demolished and the property cleaned up, according to the council agenda item prepared by City Building and Zoning Code Official Lee Tolar. The low quote for the demolition is $7,500.

At Tuesday’s council meeting, Councilman Charlie Lowrance started the discussion by asking Tolar about the houses slated for demolition.

“So we have a lot of properties we are going to tear down houses on at a pretty big cost to the City,” he said. “I am not questioning the fact that they need it or not, my first question is are we going to be able to recover any of this money? Are we going to put liens on the property and then owning the property and then it would going to sell it to people how are interested or give it to people who are going to build there? Is there any future intent with it.”

Tolar said the City will file a special assessment lien on each demolition. Depending on whether or not the City chooses to foreclose on the property, if they did that, there are no mortgages on either of the properties. “We could put it out to Habitat for Humanity or whoever and they could build a house on it.”

Lowrance asked if there are a lot more of these properties out there?

“Well, four of these caught fire,” Tolar replied, adding that is the reason they have been condemned and the other one is in really bad shape.

Lowrance said it seems the owner should be responsible in someway.

Tolar said the owners have been given opportunities to make it right, but they fail to do that.

Stewart said this is an ongoing process for many years. “If you don’t destroy those houses, they are dangerous and it’s a life and safety issue, number one.

“The City has no choice and they should foreclose on them,” he said.

Lowrance said, “I think it is a good move rather than have them deteriorate further and [create] neighborhood blight. I just wish there was some way we could try to get some of this money back and maybe if we do, foreclose on them and advertise them.”

Dettman said it appears that the cost to demolish is close to the value of the properties so it will be close to a wash or maybe come out a little bit in the City’s favor.

Two of these properties being discussed have liens that are cross attached because the current owners, a father and son team, mutually own other properties.

“I would guess there are close to a million dollars in liens against these two homes alone if you cross attached all the properties,” Hoglund said. “We have tried to get rid of some of these homes through Habitat [for Humanity]. Habitat is not interested at this point.”

A number of these homes in Highlands Homes are on 1/8th acre lots and that size is deemed almost not buildable in this day and age, he said.

“So we are facing a real problem in how to move forward and how to rehab that area,” Hoglund said. “I think we are going to have to systematically look at a procedure for rental inspections so the properties don’t fall into the dilapidated state they are in right now. Still occupied and still having people renting them in a poor state of repair and many of them accruing code liens and probably building/zoning liens for being in terrible shape.”

Stewart said that is a call for a real workshop because that is a bad problem.

Dettman said there are many homes in that neighborhood that are very close to that shape and as time goes on it is just going to increase the problem.

Council voted 4-0 to have the City demolish the five condemned houses. Councilman Lenard Carlisle was absent from the meeting.

A tan year-old cur rests at the Humane Society of Highlands County after an almost week-long ordeal of having the plastic canister from a gravity-fed cat feeder stuck on his head. For days, through thunderstorms and loud weekend fireworks, he wandered Sylvan Shores scared, thirsty, hungry and unable to see where he was going.

Sheriff’s Lt. Clay Kinslow, head of Highlands County Animal Services, shows the cat feeder canister that a year-old cur had stuck on its head as it wandered a Lake Placid subdivision for nearly a week. Four trucks scoured Sylvan Shores on Tuesday, Kinslow said, and had to tranquilize the scared dog to help it.

This hole, at the bottom of a cat-feeder canister, was the only way a year-old cur was able to breathe or get any water, said Lt. Clay Kinslow, head of Highlands County Animal Services, here gesturing at the narrow opening. The dog, who was located, tranquilized and rescued from the plastic bottle on Tuesday, is now recovering at the Humane Society of Highlands County.

SEBRING — A dog that had wandered Sylvan Shores for a week with his head caught in a plastic jug, unable to eat and barely able to drink or breathe, now has a bed at the Humane Society of Highlands County.

Those talks are expected to take a while. Fortunately, said Lt. Clay Kinslow of Highlands County Animal Services, the tan year-old male cur his officers rescued Tuesday didn’t have to have a bottle stuck on his head any longer. It had already been a week.

Kinslow said he’d seen social media posts last Thursday or Friday about a dog wandering Sylvan Shores in Lake Placid, on the east side of Lake Clay, with some kind of plastic container stuck on its head. No one seemed to be able to approach the dog and render aid.

“I was losing some sleep on that. He wasn’t able to eat,” Kinslow said. “[He] got water, somehow. He wouldn’t have lasted without water.”

Tuesday morning, he had four trucks in the area, looking for the dog, and they found him running down a road. They had to tranquilize the dog to get the jug off his head.

It turned out to be the food storage compartment of a gravity-fed cat feeder. The top was open and the dog apparently stuck his head in to get at the food. They took him to the Humane Society immediately for shelter and veterinary care.

He was still there Thursday, recovering from almost a week with no food and very little water. Kinslow said the dog has a collar with no number, and no microchip. If he isn’t claimed in five days, the Humane Society — a no-kill shelter — will put him up for adoption.

“I don’t even know how he could hardly see where he was going. And he was out in those really bad rain storms,” Spiegel said, not to mention a weekend of fireworks. “He’s eating and drinking now. He’s still very terrified.”

Meanwhile, Spiegel has got in touch with Kinslow and County Commissioner Kathy Rapp about having stronger tethering laws in the county. Rapp said the issue is also involving the Highlands County Sheriff’s Office as a whole as well as the State Attorney’s Office and county government officials.

Kinslow said, right now, a dog owner is allowed to tether a dog to a spot on their property, but the animal has to have food and water.

“You can’t tie up a dog to a tree without food, water or shelter,” Kinslow said.

The problem, both Rapp and Kinslow said, is there is no time limit, as in other jurisdictions in the country.

“In Highlands County, right now, you can have a dog tethered 24 hours a day, seven days a week, and there’s no law against it,” Kinslow said.

Rapp said Kinslow can send out officers to check for neglect, and they can pick up the dog to give it water, food and care, but without a law violation, the dog can go right back to the same home.

Spiegel said she has an appointment Tuesday with county officials and other stakeholders, to talk about what they would like to see in an ordinance, and then present it to County Attorney Sherry Sutphen, who can then present it to the County Commission.

“Because there are hundreds of dogs out there living in total, total misery,” Spiegel said. “If your dog is just tied outside, then you don’t need a dog.”

Animal Services deals with those cases, and she doesn’t see the animals unless an owner surrenders the dog. Of course, they get owner-surrenders every day. Spiegel said the Humane Society took in 130 dogs in June alone, and 15 more so far in July.

“The main reason is ‘I’m moving and I can’t take them with me,’” Spiegel said. “And then the other one is, ‘I adopted him as a puppy, but now he’s too big and I can’t handle him.’”

Kinslow said the best strategy would be to pull copies of the tethering laws in other Florida counties.

“I think that will give us a starting point for what other counties are doing,” Kinslow said.