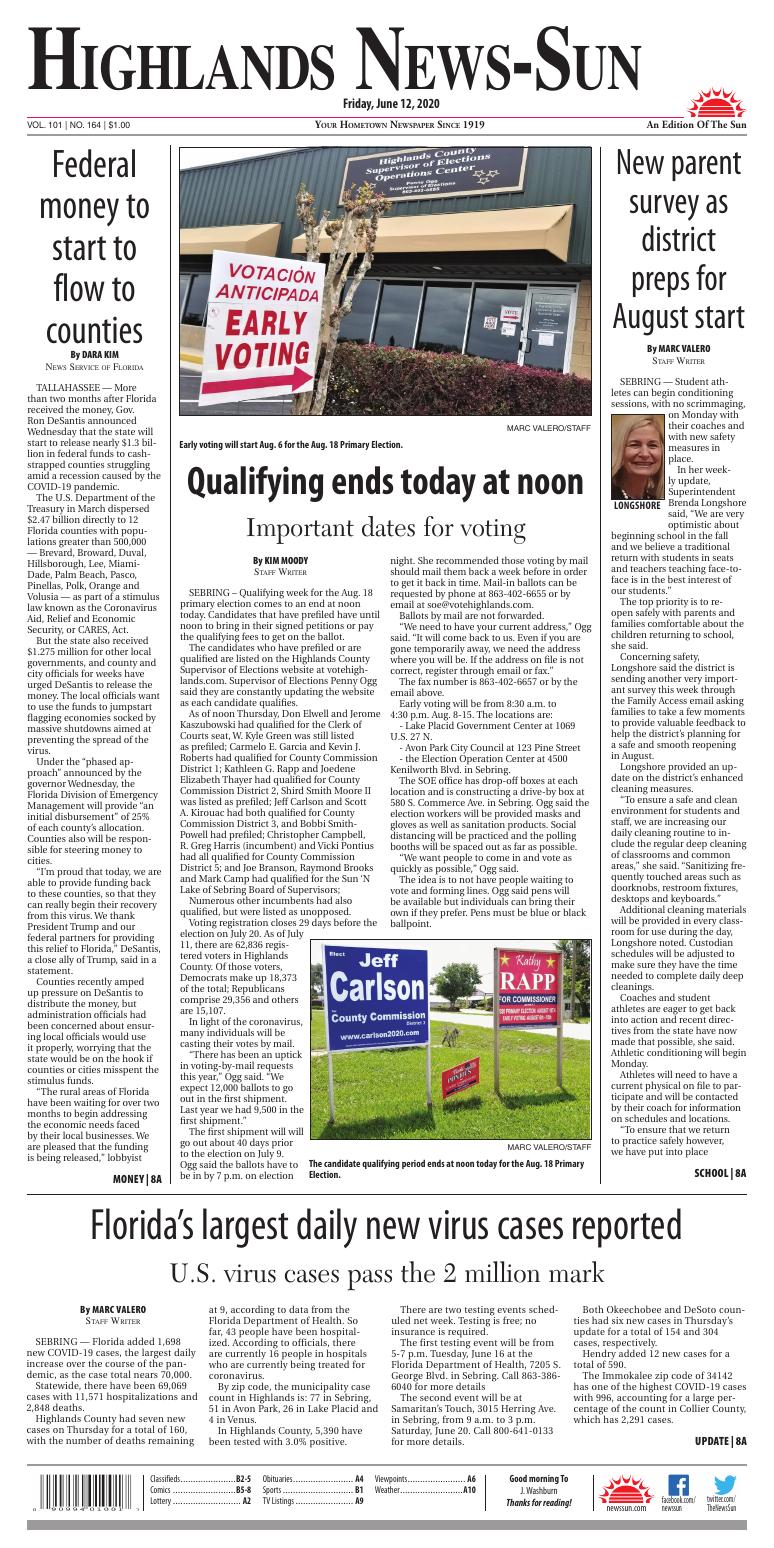 The candidate qualifying period ends at noon today for the Aug. 18 Primary Election.

Early voting will start Aug. 6 for the Aug. 18 Primary Election.

SEBRING – Qualifying week for the Aug. 18 primary election comes to an end at noon today. Candidates that have prefiled have until noon to bring in their signed petitions or pay the qualifying fees to get on the ballot.

Numerous other incumbents had also qualified, but were listed as unopposed.

In light of the coronavirus, many individuals will be casting their votes by mail.

The first shipment will will go out about 40 days prior to the election on July 9. Ogg said the ballots have to be in by 7 p.m. on election night. She recommended those voting by mail should mail them back a week before in order to get it back in time. Mail-in ballots can be requested by phone at 863-402-6655 or by email at soe@votehighlands.com.

Ballots by mail are not forwarded.

“We need to have your current address,” Ogg said. “It will come back to us. Even if you are gone temporarily away, we need the address where you will be. If the address on file is not correct, register through email or fax.”

- the Election Operation Center at 4500 Kenilworth Blvd. in Sebring.

The SOE office has drop-off boxes at each location and is constructing a drive-by box at 580 S. Commerce Ave. in Sebring. Ogg said the election workers will be provided masks and gloves as well as sanitation products. Social distancing will be practiced and the polling booths will be spaced out as far as possible.

“We want people to come in and vote as quickly as possible,” Ogg said.

The idea is to not have people waiting to vote and forming lines. Ogg said pens will be available but individuals can bring their own if they prefer. Pens must be blue or black ballpoint.

A breakdown of the positive cases in Highlands County as of Thursday, June 11, according to the Florida Department of Health.

SEBRING — Florida added 1,698 new COVID-19 cases, the largest daily increase over the course of the pandemic, as the case total nears 70,000.

Highlands County had seven new cases on Thursday for a total of 160, with the number of deaths remaining at 9, according to data from the Florida Department of Health. So far, 43 people have been hospitalized. According to officials, there are currently 16 people in hospitals who are currently being treated for coronavirus.

By zip code, the municipality case count in Highlands is: 77 in Sebring, 51 in Avon Park, 26 in Lake Placid and 4 in Venus.

There are two testing events scheduled net week. Testing is free; no insurance is required.

Both Okeechobee and DeSoto counties had six new cases in Thursday’s update for a total of 154 and 304 cases, respectively.

The Immokalee zip code of 34142 has one of the highest COVID-19 cases with 996, accounting for a large percentage of the count in Collier County, which has 2,291 cases.

Florida counties with large daily increases in new cases on Thursday include: Dade with an increase of 271, Palm Beach with 209, Orange with 136 and Pinellas with 116.

SEBRING — Student athletes can begin conditioning sessions, with no scrimmaging, on Monday with their coaches and with new safety measures in place.

In her weekly update, Superintendent Brenda Longshore said, “We are very optimistic about beginning school in the fall and we believe a traditional return with students in seats and teachers teaching face-to-face is in the best interest of our students.”

The top priority is to reopen safely with parents and families comfortable about the children returning to school, she said.

Concerning safety, Longshore said the district is sending another very important survey this week through the Family Access email asking families to take a few moments to provide valuable feedback to help the district’s planning for a safe and smooth reopening in August.

Longshore provided an update on the district’s enhanced cleaning measures.

“To ensure a safe and clean environment for students and staff, we are increasing our daily cleaning routine to include the regular deep cleaning of classrooms and common areas,” she said. “Sanitizing frequently touched areas such as doorknobs, restroom fixtures, desktops and keyboards.”

Additional cleaning materials will be provided in every classroom for use during the day, Longshore noted. Custodian schedules will be adjusted to make sure they have the time needed to complete daily deep cleanings.

Coaches and student athletes are eager to get back into action and recent directives from the state have now made that possible, she said. Athletic conditioning will begin Monday.

Athletes will need to have a current physical on file to participate and will be contacted by their coach for information on schedules and locations.

“To ensure that we return to practice safely however, we have put into place several new precautions,” Longshore said. Coaches and athletic directors are being trained in new procedures for pre-workout screenings, appropriate distancing during workouts and the daily cleaning of the conditioning equipment and all areas.

There will be no contact or scrimmaging at this time and athletes should report for conditioning already in their workout clothes as locker rooms will remain closed, she said. Teams will not use shared water bottles or shared hydration stations, so everyone should bring their own water bottles.

Digital thermometers have been ordered and the first 100 have arrived and have been delivered to schools, she said. Temperature checks will be done on all athletes and coaches upon arrival and anyone with a temperature of 100.4 or higher will be sent home.

Anyone who has cold symptoms or fever in the last 24 hours, will also be excluded from participation.

Athletic conditioning is not mandatory and if parents are not comfortable with their child returning at this time, there will be no consequences imposed on the student, Longshore said.

“It is surely good news that communities and businesses are beginning to open again and we certainly look forward to returning to school in August,” she said.

The response to COVID-19 is continually evolving, Longshore said, and she is committed to continue to work with other school superintendents, state officials and the local health department to provide as much information as possible.

TALLAHASSEE — More than two months after Florida received the money, Gov. Ron DeSantis announced Wednesday that the state will start to release nearly $1.3 billion in federal funds to cash-strapped counties struggling amid a recession caused by the COVID-19 pandemic.

The U.S. Department of the Treasury in March dispersed $2.47 billion directly to 12 Florida counties with populations greater than 500,000 — Brevard, Broward, Duval, Hillsborough, Lee, Miami-Dade, Palm Beach, Pasco, Pinellas, Polk, Orange and Volusia — as part of a stimulus law known as the Coronavirus Aid, Relief and Economic Security, or CARES, Act.

But the state also received $1.275 million for other local governments, and county and city officials for weeks have urged DeSantis to release the money. The local officials want to use the funds to jumpstart flagging economies socked by massive shutdowns aimed at preventing the spread of the virus.

Under the “phased approach” announced by the governor Wednesday, the Florida Division of Emergency Management will provide “an initial disbursement” of 25% of each county’s allocation. Counties also will be responsible for steering money to cities.

“I’m proud that today, we are able to provide funding back to these counties, so that they can really begin their recovery from this virus. We thank President Trump and our federal partners for providing this relief to Florida,” DeSantis, a close ally of Trump, said in a statement.

Counties recently amped up pressure on DeSantis to distribute the money, but administration officials had been concerned about ensuring local officials would use it properly, worrying that the state would be on the hook if counties or cities misspent the stimulus funds.

“The rural areas of Florida have been waiting for over two months to begin addressing the economic needs faced by their local businesses. We are pleased that the funding is being released,” lobbyist Chris Doolin, who represents the Small County Coalition, told The News Service of Florida on Wednesday.

To receive the money, counties will have to sign funding agreements with the emergency-management agency promising to use the funds on “eligible expenditures as defined by the CARES Act” and related guidance by the Treasury Department, according to a news release from the governor’s office.

Counties also will have to agree to repay the state any portion of the money “that is unused, or is not utilized in accordance with the CARES Act stipulations,” the release said.

And counties will have to submit quarterly reports to the Division of Emergency Management detailing how the money was spent, along with projections of eligible expenditures.

Counties can also submit requests to the agency “for additional funds in excess of their 25% initial disbursement on a reimbursement basis” for eligible expenditures.

“All counties, including counties that already received direct payment from the U.S. Department of the Treasury, should provide funds to municipalities located within their jurisdiction on a reimbursement basis for expenditures eligible under the CARES Act and related guidance,” the news release said.

In a prepared statement issued following DeSantis’ announcement, the Florida League of Cities said it wanted to draw attention to the governor’s “stated intent that cities receive the funding they need.” The cities said they wanted to get the money directly, instead of through counties, “to eliminate an unnecessary layer of bureaucracy.”

Doolin also expressed concern that the 12 largest counties were able to draw down all of their money in March, while DeSantis initially is doling out a quarter of the federal funds to the remaining counties.

“We hope that this does not hinder the pace at which we are able to respond to our economic needs in our rural communities,” he said.

Meanwhile, Palm Beach County Commissioner Melissa McKinlay, the president of the Florida Association of Counties, praised the release of the funds.

”By putting these dollars directly into our communities, the governor is ensuring our local economies, and thereby Florida’s citizens, can quickly rebound and thrive moving forward,” McKinlay told the News Service in a text message.

Following the passage of the CARES Act, the Treasury Department issued several sets of guidelines to help state and local officials figure out how the funds could be spent and distributed.

The federal law allows state and local governments to make payments for programs that “are necessary expenditures incurred” because of the public health emergency, “were not accounted for in the budget most recently approved as of the date of the enactment” of the act on March 27 and were incurred between March 1 and December 30, 2020.

Guidelines issued by the Treasury Department on April 22 also said the money could be used for “second-order effects” of the pandemic, “such as by providing economic support to those suffering from employment or business interruptions due to COVID-19-related business closures.”

Okeechobee County Commissioner Terry Burroughs said last week his community wants to use the funds to issue $5,000 to $10,000 grants to local businesses that have suffered financial losses after being shuttered for more than two months. Such a program would mirror grants offered by some large counties that received the stimulus money directly from the federal government, Burroughs said.

“Our biggest issue is trying to get our businesses up and running,” Burroughs said in a telephone interview. 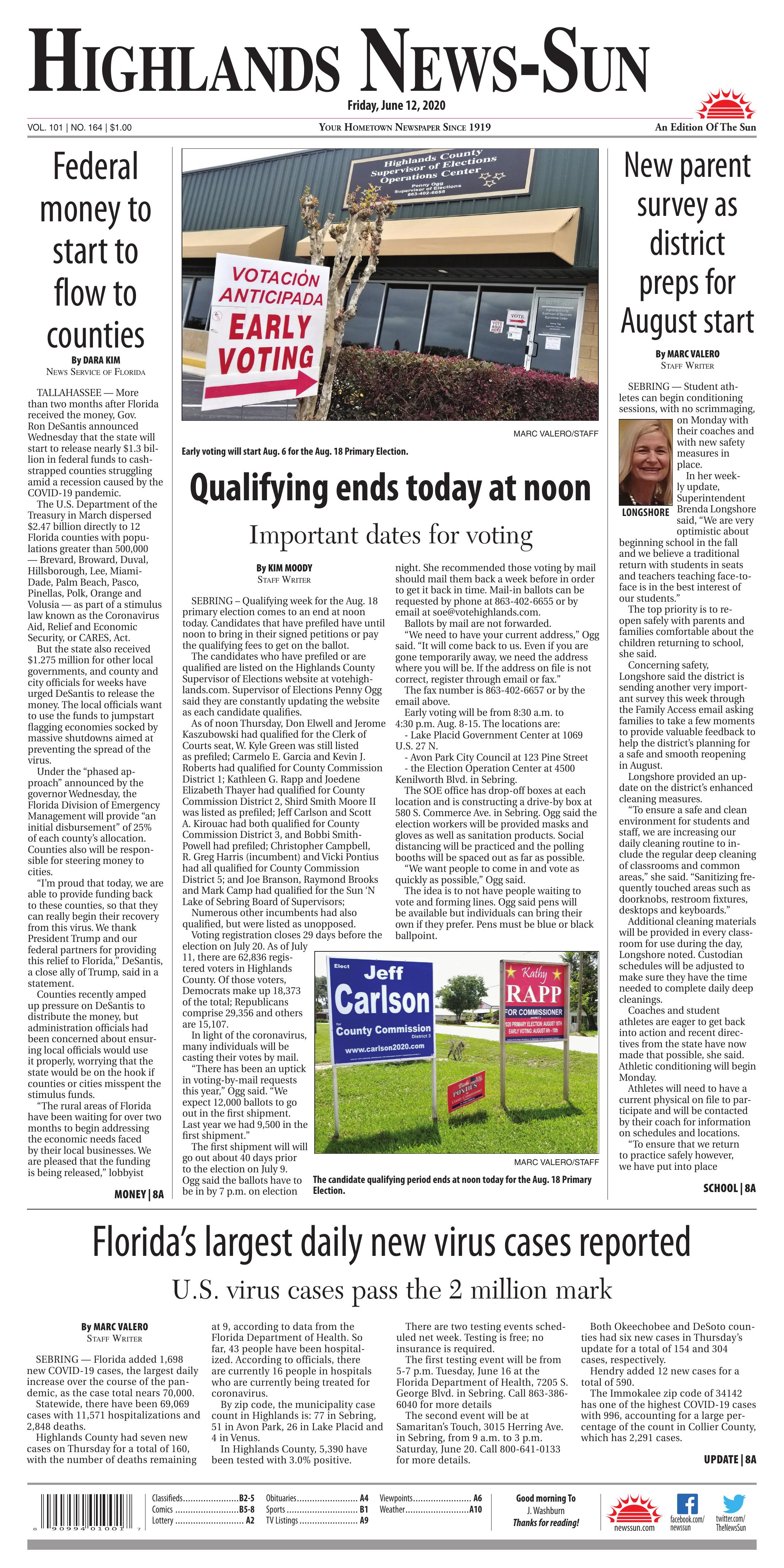