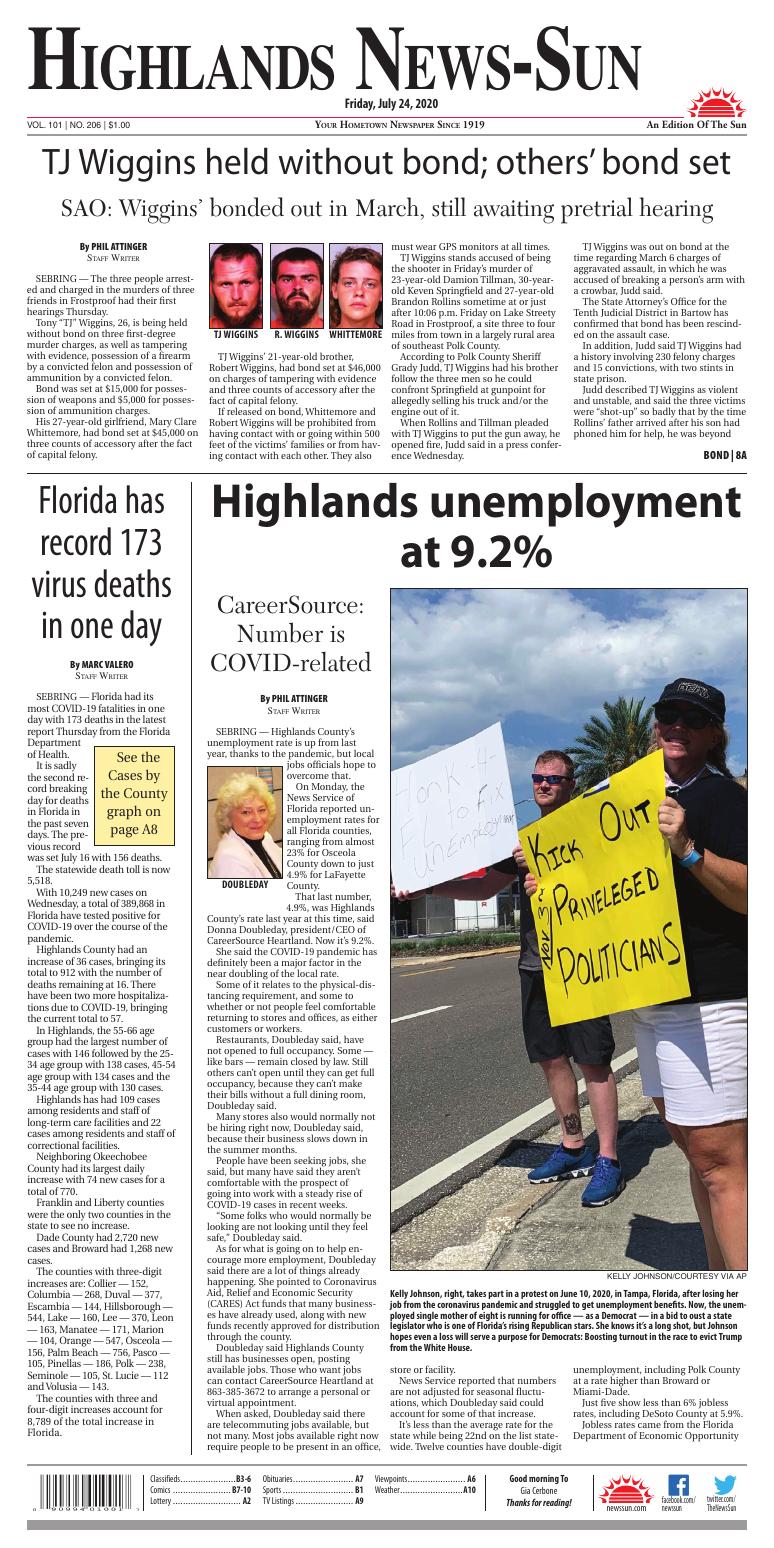 SEBRING — The three people arrested and charged in the murders of three friends in Frostproof had their first hearings Thursday.

His 27-year-old girlfriend, Mary Clare Whittemore, had bond set at $45,000 on three counts of accessory after the fact of capital felony.

TJ Wiggins’ 21-year-old brother, Robert Wiggins, had bond set at $46,000 on charges of tampering with evidence and three counts of accessory after the fact of capital felony.

TJ Wiggins stands accused of being the shooter in Friday’s murder of 23-year-old Damion Tillman, 30-year-old Keven Springfield and 27-year-old Brandon Rollins sometime at or just after 10:06 p.m. Friday on Lake Streety Road in Frostproof, a site three to four miles from town in a largely rural area of southeast Polk County.

According to Polk County Sheriff Grady Judd, TJ Wiggins had his brother follow the three men so he could confront Springfield at gunpoint for allegedly selling his truck and/or the engine out of it.

When Rollins and Tillman pleaded with TJ Wiggins to put the gun away, he opened fire, Judd said in a press conference Wednesday.

TJ Wiggins was out on bond at the time regarding March 6 charges of aggravated assault, in which he was accused of breaking a person’s arm with a crowbar, Judd said.

The State Attorney’s Office for the Tenth Judicial District in Bartow has confirmed that bond has been rescinded on the assault case.

In addition, Judd said TJ Wiggins had a history involving 230 felony charges and 15 convictions, with two stints in state prison.

Judd described TJ Wiggins as violent and unstable, and said the three victims were “shot-up” so badly that by the time Rollins’ father arrived after his son had phoned him for help, he was beyond medical help.

Judd contends that even if emergency room surgeons had been at that location, they could not have saved Rollins’ life.

Arrests took place just four days after the murder, based largely on tips from people with no knowledge of the crime, Judd said, but who knew TJ Wiggins’ reputation.

Given his arrest history and reputation, many in Polk and Highlands counties have asked how TJ Wiggins could have been out on bond. The answer from the State Attorney’s Office is that the aggravated assault was not a life felony and TJ Wiggins was not on parole or probation at the time.

Jake Orr with the Bartow State Attorney’s Office said he hoped that the other defendants will not be getting out on bond. The State Attorney would see them as a danger to the community.

However, he said, the decision of whether or not to set bond resides with a judge, based on the nature of the crime, recommendations from prosecutors and what the law will uphold.

With TJ Wiggins’ assault charges, there was no legal vehicle with which to hold him without bond, Orr said.

When asked about the record of felony charges and convictions, Orr said, given TJ Wiggins’ age, many if not most of them occurred when he was a juvenile.

One or two of those cases had dozens of charges, Orr said, because TJ Wiggins and other teenage accomplices broke into several structures and stole multiple items over the course of two nights. He was convicted on two or three charges and the rest were dropped.

Since he turned 18, Orr said, TJ Wiggins has been prosecuted on three cases —two in Highlands County and one in Polk County, including the recent assault — and has served six of his eight adult years in prison.

The assault case, Orr said, was set to have and still will have a pretrial hearing on July 30. Like all other courthouses in Florida since March, hearings have been handled virtually, but Orr said TJ Wiggins had not missed any scheduled hearings, which would have been a reason to hold him.

Kelly Johnson, right, takes part in a protest on June 10, 2020, in Tampa, Florida, after losing her job from the coronavirus pandemic and struggled to get unemployment benefits. Now, the unemployed single mother of eight is running for office — as a Democrat — in a bid to oust a state legislator who is one of Florida’s rising Republican stars. She knows it’s a long shot, but Johnson hopes even a loss will serve a purpose for Democrats: Boosting turnout in the race to evict Trump from the White House.

SEBRING — Highlands County’s unemployment rate is up from last year, thanks to the pandemic, but local jobs officials hope to overcome that.

On Monday, the News Service of Florida reported unemployment rates for all Florida counties, ranging from almost 23% for Osceola County down to just 4.9% for LaFayette County.

She said the COVID-19 pandemic has definitely been a major factor in the near doubling of the local rate.

Some of it relates to the physical-distancing requirement, and some to whether or not people feel comfortable returning to stores and offices, as either customers or workers.

Many stores also would normally not be hiring right now, Doubleday said, because their business slows down in the summer months.

People have been seeking jobs, she said, but many have said they aren’t comfortable with the prospect of going into work with a steady rise of COVID-19 cases in recent weeks.

“Some folks who would normally be looking are not looking until they feel safe,” Doubleday said.

As for what is going on to help encourage more employment, Doubleday said there are a lot of things already happening. She pointed to Coronavirus Aid, Relief and Economic Security (CARES) Act funds that many businesses have already used, along with new funds recently approved for distribution through the county.

When asked, Doubleday said there are telecommuting jobs available, but not many. Most jobs available right now require people to be present in an office, store or facility.

News Service reported that numbers are not adjusted for seasonal fluctuations, which Doubleday said could account for some of that increase.

It’s less than the average rate for the state while being 22nd on the list statewide. Twelve counties have double-digit unemployment, including Polk County at a rate higher than Broward or Miami-Dade.

Rates are as follows:

Jobless rates came from the Florida Department of Economic Opportunity

A closer look at the positive cases of coronavirus in Highlands County as of Thursday’s report.

SEBRING — Florida had its most COVID-19 fatalities in one day with 173 deaths in the latest report Thursday from the Florida Department of Health.

It is sadly the second record breaking day for deaths in Florida in the past seven days. The previous record was set July 16 with 156 deaths.

Highlands County had an increase of 36 cases, bringing its total to 912 with the number of deaths remaining at 16. There have been two more hospitalizations due to COVID-19, bringing the current total to 57.

Neighboring Okeechobee County had its largest daily increase with 74 new cases for a total of 770.

Franklin and Liberty counties were the only two counties in the state to see no increase.

The counties with three and four-digit increases account for 8,789 of the total increase in Florida. 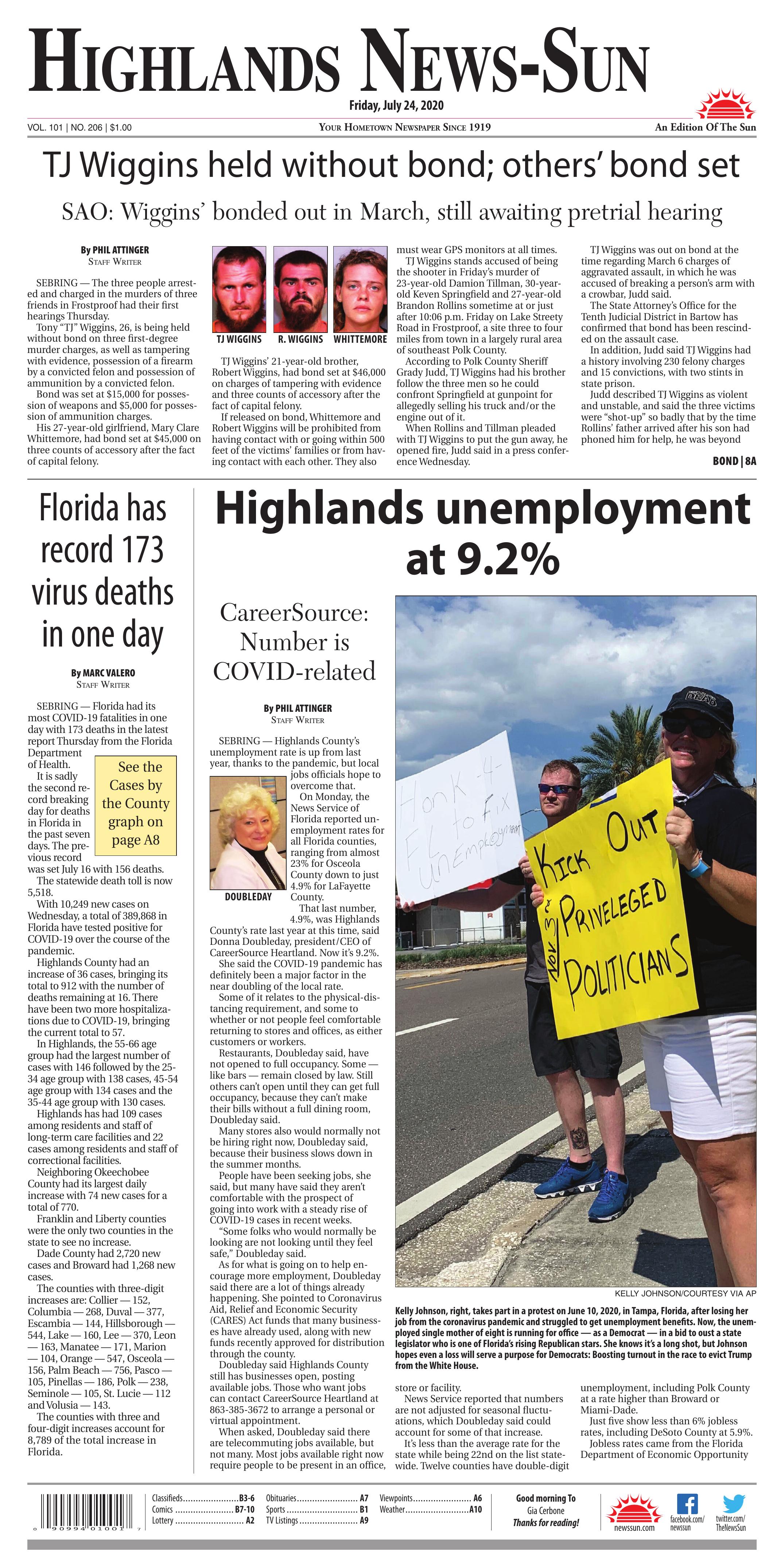