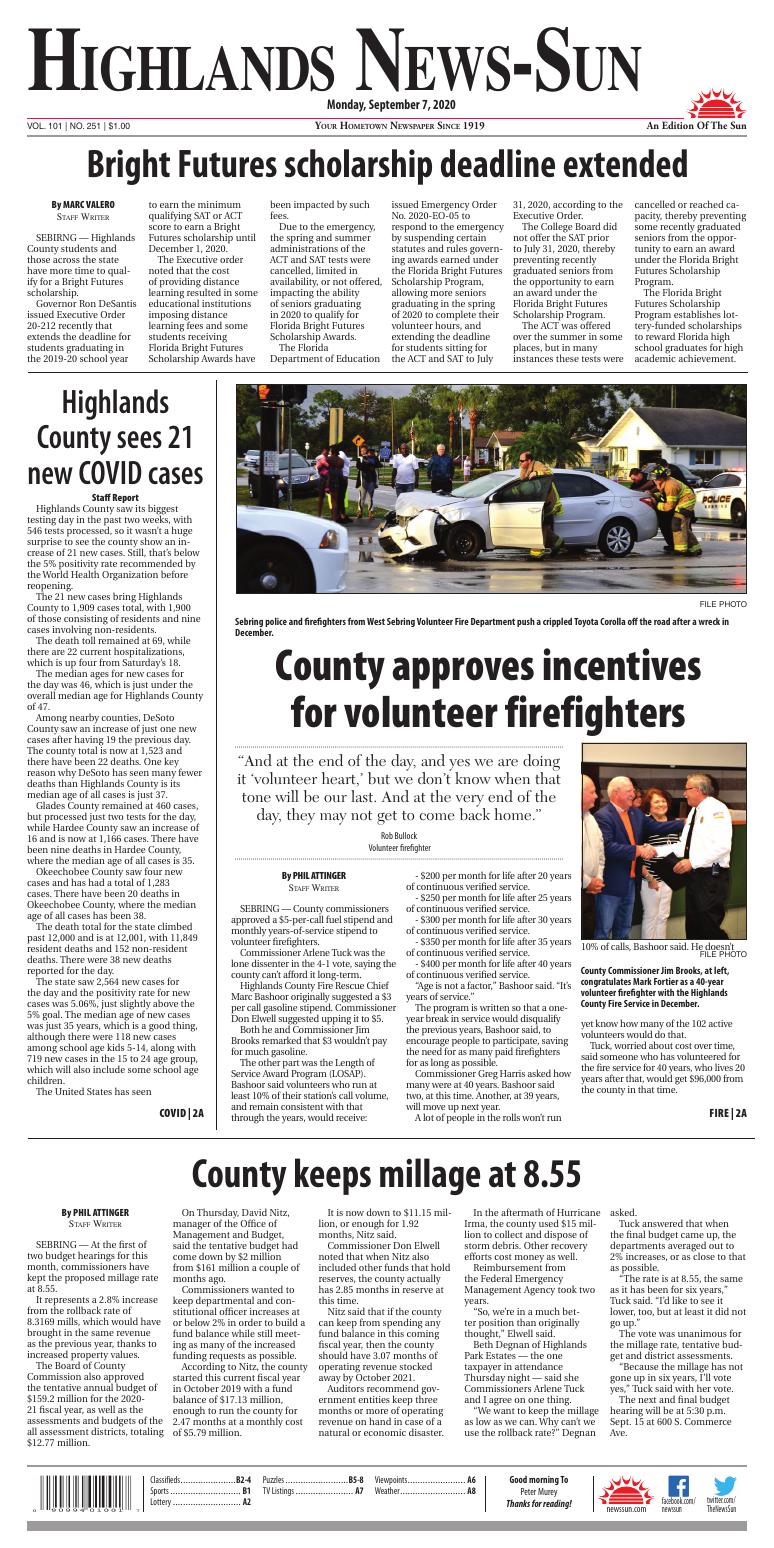 SEBIRNG — Highlands County students and those across the state have more time to qualify for a Bright Futures scholarship.

Governor Ron DeSantis issued Executive Order 20-212 recently that extends the deadline for students graduating in the 2019-20 school year to earn the minimum qualifying SAT or ACT score to earn a Bright Futures scholarship until December 1, 2020.

Due to the emergency, the spring and summer administrations of the ACT and SAT tests were cancelled, limited in availability, or not offered, impacting the ability of seniors graduating in 2020 to qualify for Florida Bright Futures Scholarship Awards.

The Florida Department of Education issued Emergency Order No. 2020-EO-05 to respond to the emergency by suspending certain statutes and rules governing awards earned under the Florida Bright Futures Scholarship Program, allowing more seniors graduating in the spring of 2020 to complete their volunteer hours, and extending the deadline for students sitting for the ACT and SAT to July 31, 2020, according to the Executive Order.

The College Board did not offer the SAT prior to July 31, 2020, thereby preventing recently graduated seniors from the opportunity to earn an award under the Florida Bright Futures Scholarship Program.

The ACT was offered over the summer in some places, but in many instances these tests were cancelled or reached capacity, thereby preventing some recently graduated seniors from the opportunity to earn an award under the Florida Bright Futures Scholarship Program.

Sebring police and firefighters from West Sebring Volunteer Fire Department push a crippled Toyota Corolla off the road after a wreck in December.

County Commissioner Jim Brooks, at left, congratulates Mark Fortier as a 40-year volunteer firefighter with the Highlands County Fire Service in December. Alongside Brooks are Commissioners Ron Handley and Arlene Tuck, who gave him a big hug. Fortier was one of 48 volunteers honored that night for their combined total of 630 years of service.

Commissioner Arlene Tuck was the lone dissenter in the 4-1 vote, saying the county can’t afford it long-term.

Both he and Commissioner Jim Brooks remarked that $3 wouldn’t pay for much gasoline.

The other part was the Length of Service Award Program (LOSAP). Bashoor said volunteers who run at least 10% of their station’s call volume, and remain consistent with that through the years, would receive:

- $200 per month for life after 20 years of continuous verified service.

- $250 per month for life after 25 years of continuous verified service.

- $300 per month for life after 30 years of continuous verified service.

- $350 per month for life after 35 years of continuous verified service.

- $400 per month for life after 40 years of continuous verified service.

“Age is not a factor,” Bashoor said. “It’s years of service.”

The program is written so that a one-year break in service would disqualify the previous years, Bashoor said, to encourage people to participate, saving the need for as many paid firefighters for as long as possible.

Commissioner Greg Harris asked how many were at 40 years. Bashoor said two, at this time. Another, at 39 years, will move up next year.

A lot of people in the rolls won’t run 10% of calls, Bashoor said. He doesn’t yet know how many of the 102 active volunteers would do that.

Tuck, worried about cost over time, said someone who has volunteered for the fire service for 40 years, who lives 20 years after that, would get $96,000 from the county in that time.

“A volunteer is somebody that does it from their heart, and I know these guys do put themselves in danger, but my understanding when I met with several of these guys, all they wanted was a gas card,” Tuck said. “I didn’t know we were going to be doing all this $400 a month. No volunteer gets $400 a month, and then before you know it you’re going to end up having to pay retirement, Social Security, everything else on them.”

Commissioner Don Elwell remarked that for 100 years, the unincorporated county had only or mostly volunteer firefighters. He wanted to correct that issue, because volunteerism has dropped off and because full-time fire service is needed now.

Elwell, noting that volunteers are still a large part of the force, said “a larger part of the pie needs to be carved out for them.”

When asked how much more it would cost to pay volunteers $5 per call, Bashoor said $12,000 more.

With the LOSAP estimated to cost $225,000 per year — which Bashoor said would pay for four paid firefighters — Elwell noted that is just 4%-$4.5% of the annual $5.2 million budget for Highlands County Fire Rescue.

Elwell was OK with that going to volunteers, who staff 70% of the call volume.

Bashoor said 102 volunteers ran at least one call in the last six months, while the department has 97 paid firefighters — 54 of which run medic units and some others hold office roles.

He has six full-time firefighters at each station on each shift, and wants to have four per station per shift, but volunteers help.

All volunteers do the same hours of training that professional firefighters get to wear bunker gear and enter burning buildings, Bashoor said, including hazardous materials training.

Venus Fire Chief Steve Irving said he supported creation of a combined paid and volunteer department because of the possibility of having incentives to recruit and retain people.

He started as a firefighter at age 16, but not in Highlands County until 2009. Irving said if he makes it another eight years, he could get $200 per month.

The commitment is eight to 10 hours per month of training before calls, which Irving said can run up to six hours each, like a fatal wreck a few weeks ago on U.S. 27 involving a semi-trailer.

“So, it’s hard to codify the time and the investment and the heart. This is a small gesture to say, ‘Hey, here is a small carrot. if you stick it out with us, if you — like me — as I said, God willing, can stick it out,’ that’s the incentive to say, ‘Well let me make it 58 years, not 50 years,’ so I think that’s something you need to keep in mind.”

Rob Bullock, volunteer firefighter with Highlands Lakes Station 1 said he graduated high school in 2003 and joined the volunteer fire department in Lorida that year, with his eyes on working in Highlands County Emergency Medical Services.

That year, he was a full-time college student, worked full-time at Red Lobster and went through the county’s 160-hour Firefighter 1 training, to certify to go into a burning building.

He then went through medic training and worked with the county’s EMS for a time.

He puts in four Mondays per month training and responds to calls. Budget cuts took the full-time staff from Station 1 and volunteers have taken up for them.

“This room could be full of people to advocate for what Chief Bashoor just put before you,” Bullock said. “Unfortunately, volunteers are at their jobs.”

Several were at the commission meeting Tuesday, but Bullock said they had to leave, waiting for the packed agenda to clear. He was able to hold out.

Citing Elwell’s discussion with Bashoor, Bullock said it costs $75,000 per year to pay for one full-time firefighter.

For the cost of four, the county can get and keep 102, he said, every day of the year.

When a neighbor set Bullock’s farm on fire with a runaway burn, firefighters from the north end of the county, including Bashoor, were on-scene for eight hours, Bullock said, outside of their training and calls for the rest of the month.

After a pancreatitis battle, Bullock decided he would keep volunteering as a firefighter, despite the physical strain and needing to run to and from the station as many as eight times in any 24-hour period — risking wrecks each time that insurance might not cover.

However, she said that would be a bigger discussion and analysis with administration. Bashoor said the fire service carefully abides by the Fair Labor Standards Act.

SEBRING — At the first of two budget hearings for this month, commissioners have kept the proposed millage rate at 8.55.

It represents a 2.8% increase from the rollback rate of 8.3169 mills, which would have brought in the same revenue as the previous year, thanks to increased property values.

The Board of County Commission also approved the tentative annual budget of $159.2 million for the 2020-21 fiscal year, as well as the assessments and budgets of the all assessment districts, totaling $12.77 million.

On Thursday, David Nitz, manager of the Office of Management and Budget, said the tentative budget had come down by $2 million from $161 million a couple of months ago.

Commissioners wanted to keep departmental and constitutional officer increases at or below 2% in order to build a fund balance while still meeting as many of the increased funding requests as possible.

According to Nitz, the county started this current fiscal year in October 2019 with a fund balance of $17.13 million, enough to run the county for 2.47 months at a monthly cost of $5.79 million.

Commissioner Don Elwell noted that when Nitz also included other funds that hold reserves, the county actually has 2.85 months in reserve at this time.

Nitz said that if the county can keep from spending any fund balance in this coming fiscal year, then the county should have 3.07 months of operating revenue stocked away by October 2021.

Auditors recommend government entities keep three months or more of operating revenue on hand in case of a natural or economic disaster.

In the aftermath of Hurricane Irma, the county used $15 million to collect and dispose of storm debris. Other recovery efforts cost money as well.

“So, we’re in a much better position than originally thought,” Elwell said.

Beth Degnan of Highlands Park Estates — the one taxpayer in attendance Thursday night — said she Commissioners Arlene Tuck and I agree on one thing.

“We want to keep the millage as low as we can. Why can’t we use the rollback rate?” Degnan asked.

Tuck answered that when the final budget came up, the departments averaged out to 2% increases, or as close to that as possible.

The vote was unanimous for the millage rate, tentative budget and district assessments.

“Because the millage has not gone up in six years, I’ll vote yes,” Tuck said with her vote.

Highlands County saw its biggest testing day in the past two weeks, with 546 tests processed, so it wasn’t a huge surprise to see the county show an increase of 21 new cases. Still, that’s below the 5% positivity rate recommended by the World Health Organization before reopening.

The 21 new cases bring Highlands County to 1,909 cases total, with 1,900 of those consisting of residents and nine cases involving non-residents.

The death toll remained at 69, while there are 22 current hospitalizations, which is up four from Saturday’s 18.

The median ages for new cases for the day was 46, which is just under the overall median age for Highlands County of 47.

Among nearby counties, DeSoto County saw an increase of just one new cases after having 19 the previous day. The county total is now at 1,523 and there have been 22 deaths. One key reason why DeSoto has seen many fewer deaths than Highlands County is its median age of all cases is just 37.

Glades County remained at 460 cases, but processed just two tests for the day, while Hardee County saw an increase of 16 and is now at 1,166 cases. There have been nine deaths in Hardee County, where the median age of all cases is 35.

The state saw 2,564 new cases for the day and the positivity rate for new cases was 5.06%, just slightly above the 5% goal. The median age of new cases was just 35 years, which is a good thing, although there were 118 new cases among school age kids 5-14, along with 719 new cases in the 15 to 24 age group, which will also include some school age children.

The United States has seen 6.26 million cases, according to Johns Hopkins University Center for Systems Science and Engineering, with 188,711 deaths.

Globally, there have been 26.9 million cases, which should climb past the 27-million figure with the next release of Monday’s numbers and there have been 880,779 deaths. 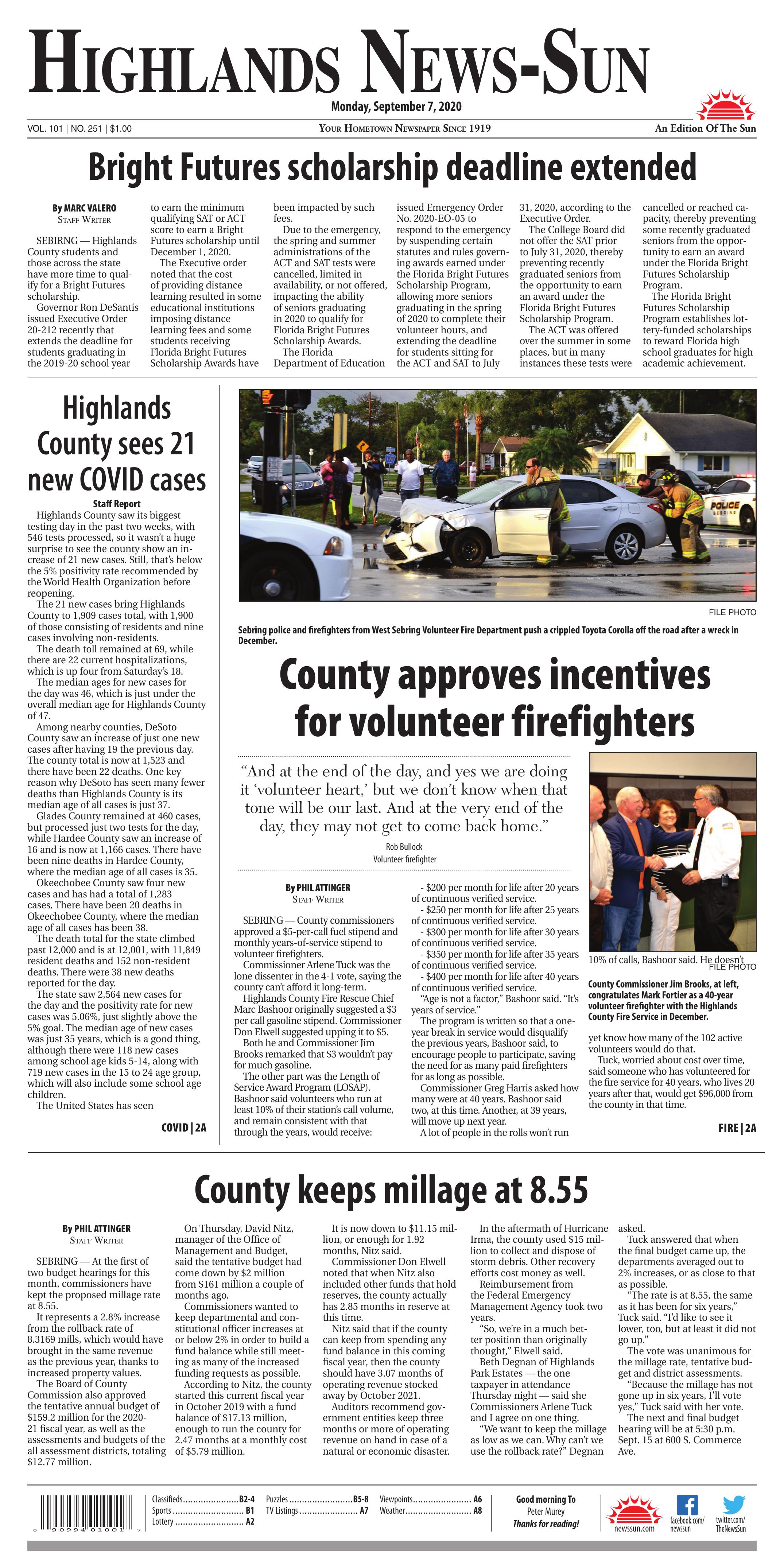