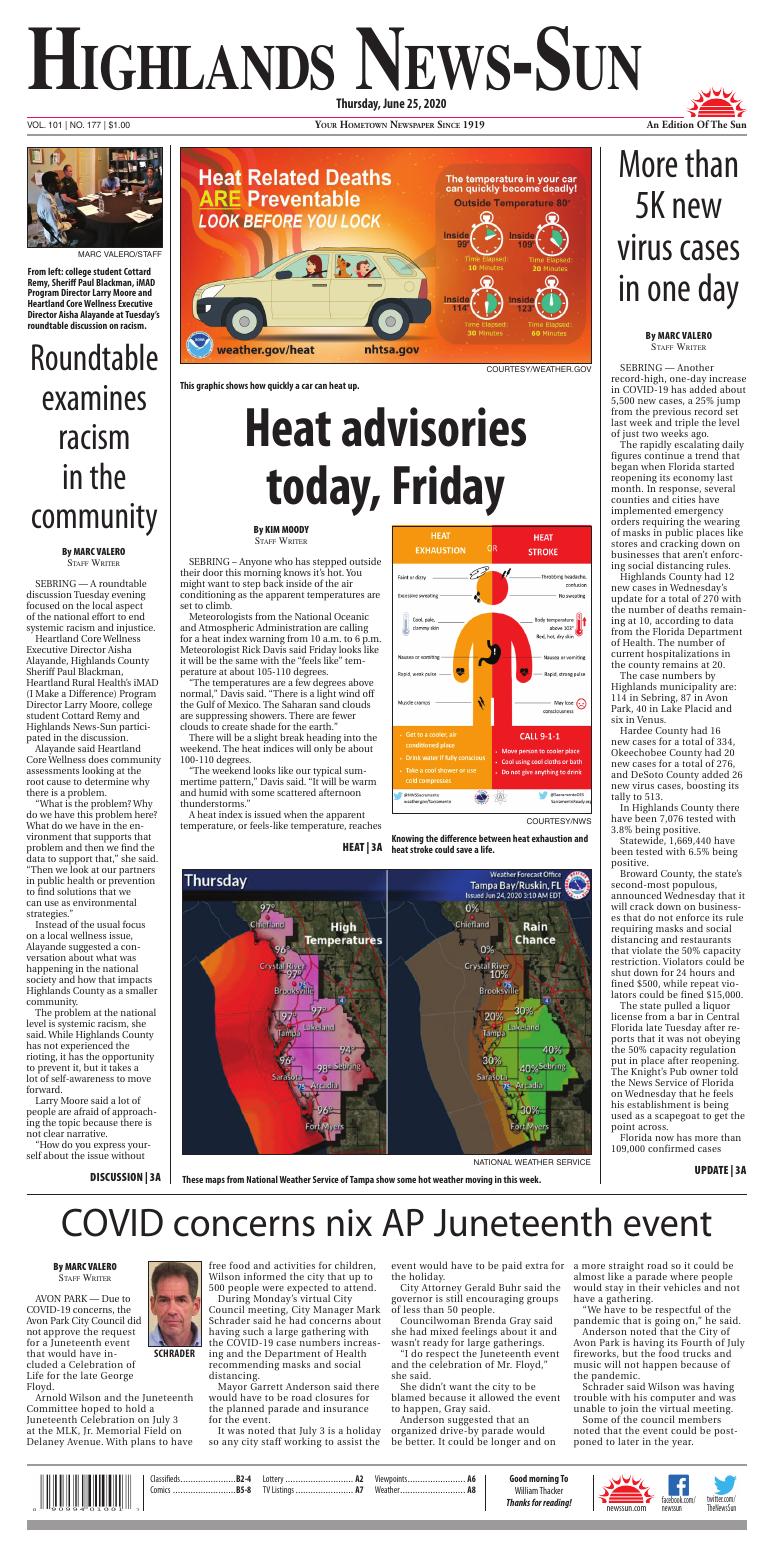 These maps from National Weather Service of Tampa show some hot weather moving in this week.

Knowing the difference between heat exhaustion and heat stroke could save a life.

This graphic shows how quickly a car can heat up.

A graph that shows pediatric deaths due to being left in hot cars.

SEBRING – Anyone who has stepped outside their door this morning knows it’s hot. You might want to step back inside of the air conditioning as the apparent temperatures are set to climb.

Meteorologists from the National Oceanic and Atmospheric Administration are calling for a heat index warning from 10 a.m. to 6 p.m. Meteorologist Rick Davis said Friday looks like it will be the same with the “feels like” temperature at about 105-110 degrees.

“The temperatures are a few degrees above normal,” Davis said. “There is a light wind off the Gulf of Mexico. The Saharan sand clouds are suppressing showers. There are fewer clouds to create shade for the earth.”

There will be a slight break heading into the weekend. The heat indices will only be about 100-110 degrees.

“The weekend looks like our typical summertime pattern,” Davis said. “It will be warm and humid with some scattered afternoon thunderstorms.”

“At the first sign of heat exhaustion, get into air conditioning,” Davis said. “Sit in the car with the air on.”

In the event of the more serious heat stroke, symptoms include a fever of 103+, nausea/vomiting, rapid pulse, loss of consciousness, lack of sweating and confusion, call 911. The NWS site says to move the person to shade or air conditioning, use cool cloths or baths but do not give fluids to the victim.

Leaving children, disabled adults or animals in a hot car can kill them. Heat stroke can happen when children are left in cars or if they climb into them and become trapped. Weather.gov said hyperthermia can happen even on a mild day in the 70s.

The National Highway Traffic Safety Administration said the first heat stroke death of a child happened on April 25 when a 4-year-old climbed into a car unbeknownst to his parents.

Part of the campaign to save children is to lock car doors when the car is parked to prevent accidents. The NHTSA website shows 52 children died in hot cars in 2019, down only one child from 2018’s 53 children.

Lake Placid Police CHief James Fansler said if an animal, child or disabled person is in a locked car with no air conditioning and is in distress, it is OK to break the car window to rescue them. If they are not in distress, call law enforcement and standby with them.

AVON PARK — Due to COVID-19 concerns, the Avon Park City Council did not approve the request for a Juneteenth event that would have included a Celebration of Life for the late George Floyd.

Arnold Wilson and the Juneteenth Committee hoped to hold a Juneteenth Celebration on July 3 at the MLK, Jr. Memorial Field on Delaney Avenue. With plans to have free food and activities for children, Wilson informed the city that up to 500 people were expected to attend.

During Monday’s virtual City Council meeting, City Manager Mark Schrader said he had concerns about having such a large gathering with the COVID-19 case numbers increasing and the Department of Health recommending masks and social distancing.

Mayor Garrett Anderson said there would have to be road closures for the planned parade and insurance for the event.

It was noted that July 3 is a holiday so any city staff working to assist the event would have to be paid extra for the holiday.

Councilwoman Brenda Gray said she had mixed feelings about it and wasn’t ready for large gatherings.

“I do respect the Juneteenth event and the celebration of Mr. Floyd,” she said.

She didn’t want the city to be blamed because it allowed the event to happen, Gray said.

Anderson suggested that an organized drive-by parade would be better. It could be longer and on a more straight road so it could be almost like a parade where people would stay in their vehicles and not have a gathering.

“We have to be respectful of the pandemic that is going on,” he said.

Anderson noted that the City of Avon Park is having its Fourth of July fireworks, but the food trucks and music will not happen because of the pandemic.

Schrader said Wilson was having trouble with his computer and was unable to join the virtual meeting.

Some of the council members noted that the event could be postponed to later in the year.

SEBRING — Another record-high, one-day increase in COVID-19 has added about 5,500 new cases, a 25% jump from the previous record set last week and triple the level of just two weeks ago.

The rapidly escalating daily figures continue a trend that began when Florida started reopening its economy last month. In response, several counties and cities have implemented emergency orders requiring the wearing of masks in public places like stores and cracking down on businesses that aren’t enforcing social distancing rules.

Highlands County had 12 new cases in Wednesday’s update for a total of 270 with the number of deaths remaining at 10, according to data from the Florida Department of Health. The number of current hospitalizations in the county remains at 20.

The case numbers by Highlands municipality are: 114 in Sebring, 87 in Avon Park, 40 in Lake Placid and six in Venus.

In Highlands County there have been 7,076 tested with 3.8% being positive.

Broward County, the state’s second-most populous, announced Wednesday that it will crack down on businesses that do not enforce its rule requiring masks and social distancing and restaurants that violate the 50% capacity restriction. Violators could be shut down for 24 hours and fined $500, while repeat violators could be fined $15,000.

The state pulled a liquor license from a bar in Central Florida late Tuesday after reports that it was not obeying the 50% capacity regulation put in place after reopening. The Knight’s Pub owner told the News Service of Florida on Wednesday that he feels his establishment is being used as a scapegoat to get the point across.

Two weeks ago, Florida’s one-day record for confirmed coronavirus cases was 1,601, set in mid-May. That has been exceeded every day since June 12 and the seven-day average for tests coming back positive has tripled from 3.8% on June 1 to 13%.

Nationwide, there have been 2,348,956 cases with 121,279 deaths. The Florida Department of Health added 44 of those deaths in the Wednesday update.

The Associated Press contributed to this report.

SEBRING — A roundtable discussion Tuesday evening focused on the local aspect of the national effort to end systemic racism and injustice.

Alayande said Heartland Core Wellness does community assessments looking at the root cause to determine why there is a problem.

“What is the problem? Why do we have this problem here? What do we have in the environment that supports that problem and then we find the data to support that,” she said. “Then we look at our partners in public health or prevention to find solutions that we can use as environmental strategies.”

Instead of the usual focus on a local wellness issue, Alayande suggested a conversation about what was happening in the national society and how that impacts Highlands County as a smaller community.

The problem at the national level is systemic racism, she said. While Highlands County has not experienced the rioting, it has the opportunity to prevent it, but it takes a lot of self-awareness to move forward.

Larry Moore said a lot of people are afraid of approaching the topic because there is not clear narrative.

Remy noted that Highlands County has two separate groups of people — the elderly and young people who say they have nothing to do.

Those present agree that racism and prejudice exist in Highlands County with Remy sharing that when he was working as a server in a local restaurant, a table of white people refused to have a Black waiter and the restaurant had no policy on how to handle the situation.

Blackman said Black candidates have to introduce themselves to the white voters by possibly first sending out a mailer about their candidacy and then going to community gatherings and clubhouse get-togethers.

It was noted and agreed upon that some racism is unintentional and is based on ignorance and tradition and that intentional racism is very sad in this day and age.

Alayande plans to have more roundtable discussions to assess and address the racism issues in the community. 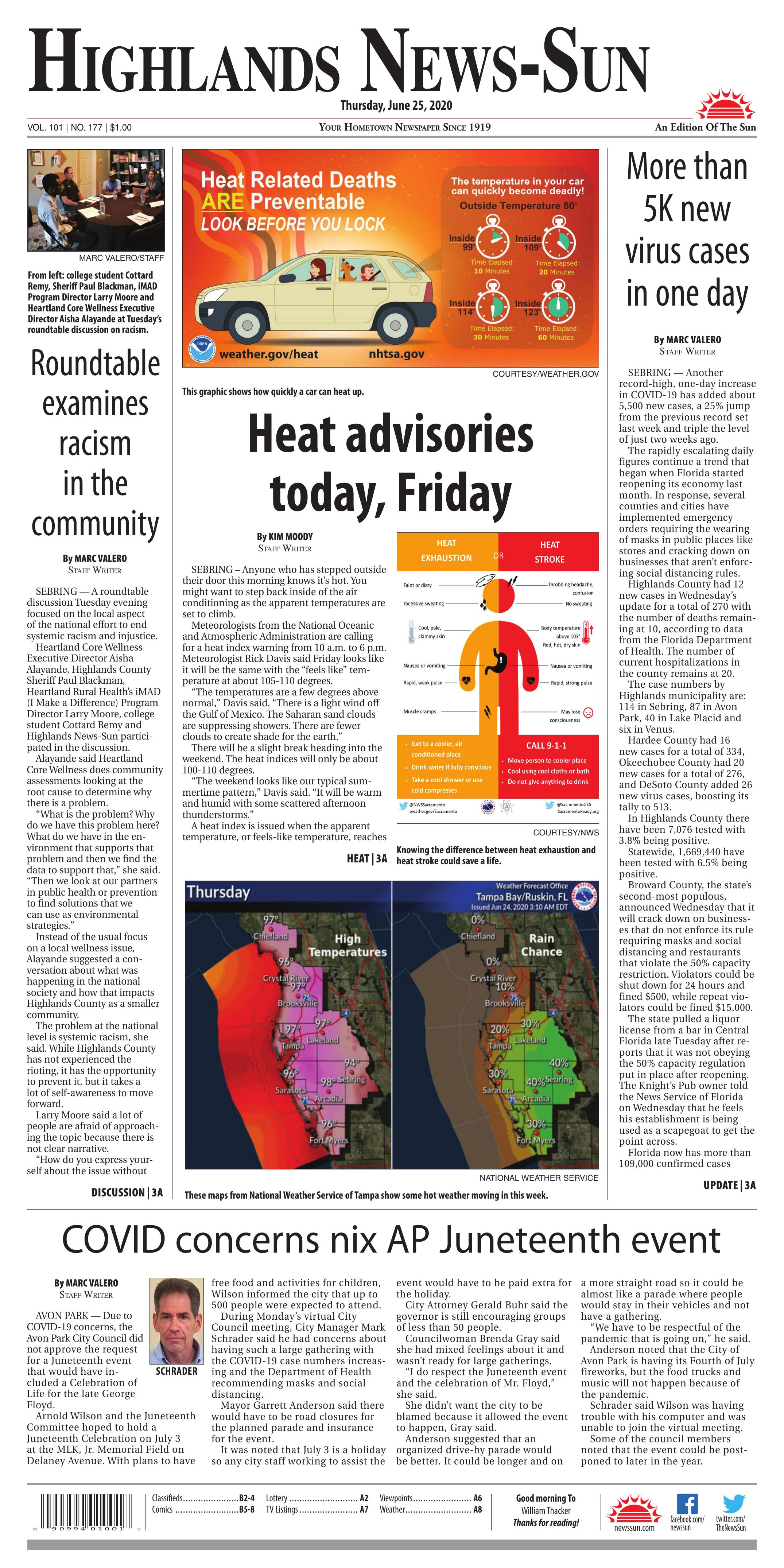