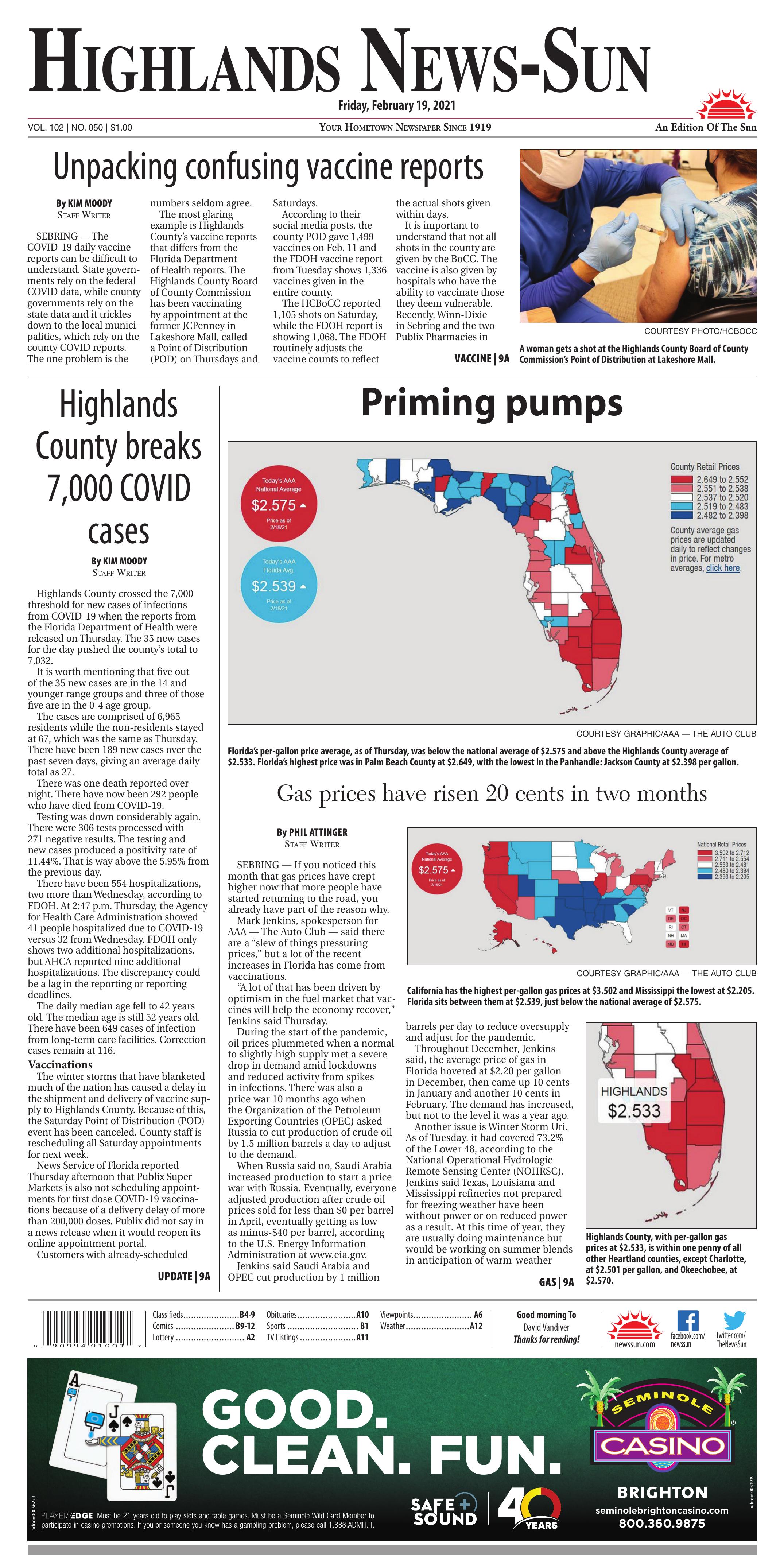 A woman gets a shot at the Highlands County Board of County Commission’s Point of Distribution at Lakeshore Mall.

The most glaring example is Highlands County’s vaccine reports that differs from the Florida Department of Health reports. The Highlands County Board of County Commission has been vaccinating by appointment at the former JCPenney in Lakeshore Mall, called a Point of Distribution (POD) on Thursdays and Saturdays.

According to their social media posts, the county POD gave 1,499 vaccines on Feb. 11 and the FDOH vaccine report from Tuesday shows 1,336 vaccines given in the entire county.

The HCBoCC reported 1,105 shots on Saturday, while the FDOH report is showing 1,068. The FDOH routinely adjusts the vaccine counts to reflect the actual shots given within days.

“State strike teams also administer the vaccine to qualified residents in assisted living facilities and long-term care facilities in our community,” Rybinski said. “It is also important to note that the information entered into Florida Shots may take a few days to be updated and reflected in the state’s vaccine county report, which is why the reports can differ.”

Rybinki also said that each patient’s vaccine is registered before they leave the POD. Lag times and reporting deadlines can effect the vaccines shown on the FDOH reports. Lag times, data dumps and reporting times can also create differences in reports of daily new cases, positivity rates and deaths.

Deaths can take weeks to be reported on FDOH’s daily reports.

Appointments should be obtained through myvaccine.fl.gov/.

Florida’s per-gallon price average, as of Thursday, was below the national average of $2.575 and above the Highlands County average of $2.533. Florida’s highest price was in Palm Beach County at $2.649, with the lowest in the Panhandle: Jackson County at $2.398 per gallon.

Highlands County, with per-gallon gas prices at $2.533, is within one penny of all other Heartland counties, except Charlotte, at $2.501 per gallon, and Okeechobee, at $2.570.

SEBRING — If you noticed this month that gas prices have crept higher now that more people have started returning to the road, you already have part of the reason why.

Mark Jenkins, spokesperson for AAA — The Auto Club — said there are a “slew of things pressuring prices,” but a lot of the recent increases in Florida has come from vaccinations.

“A lot of that has been driven by optimism in the fuel market that vaccines will help the economy recover,” Jenkins said Thursday.

During the start of the pandemic, oil prices plummeted when a normal to slightly-high supply met a severe drop in demand amid lockdowns and reduced activity from spikes in infections. There was also a price war 10 months ago when the Organization of the Petroleum Exporting Countries (OPEC) asked Russia to cut production of crude oil by 1.5 million barrels a day to adjust to the demand.

When Russia said no, Saudi Arabia increased production to start a price war with Russia. Eventually, everyone adjusted production after crude oil prices sold for less than $0 per barrel in April, eventually getting as low as minus-$40 per barrel, according to the U.S. Energy Information Administration at www.eia.gov.

Jenkins said Saudi Arabia and OPEC cut production by 1 million barrels per day to reduce oversupply and adjust for the pandemic.

Throughout December, Jenkins said, the average price of gas in Florida hovered at $2.20 per gallon in December, then came up 10 cents in January and another 10 cents in February. The demand has increased, but not to the level it was a year ago.

Another issue is Winter Storm Uri. As of Tuesday, it had covered 73.2% of the Lower 48, according to the National Operational Hydrologic Remote Sensing Center (NOHRSC). Jenkins said Texas, Louisiana and Mississippi refineries not prepared for freezing weather have been without power or on reduced power as a result. At this time of year, they are usually doing maintenance but would be working on summer blends in anticipation of warm-weather travel.

Also, Jenkins said, the storm has affected shipping. While he doesn’t track the number of tankers coming in and out of Tampa, where he lives, he said he saw gas prices increase there on Thursday morning.

Florida’s average per-gallon gasoline price was $2.539 on Thursday morning, compared to $2.542 in Hillsborough County. Highlands County’s average price was $2.533 and the rest of the Heartland counties were within a penny of that price, except Charlotte at $2.501 and Okeechobee at $2.570.

Outside of the Heartland, Florida’s prices were lowest in the Panhandle, especially on the borders of Alabama ($2.28 average) and Georgia ($2.39 average). Florida’s highest priced region is South Florida, with Palm Beach County the highest at $2.649, on average.

Florida has the highest gasoline taxes, with 36.59 cents per gallon going to the state and another 18.4 cents going to the federal government, before returning to local residents in the form of state projects. Florida counties can levy up to 12 cents of local option gasoline taxes, and Highlands County does that.

The highest average prices were in Illinois, Pennsylvania, New Jersey, the District of Columbia, Hawai’i, Alaska and the West Coast states of Washington, Oregon and California — the highest at $3.502.

How much higher will they go?

“I think they’re up right now,” Jenkins said. “I don’t know how much higher they will go.”

The oil futures markets are 10 cents above the gasoline prices, he said, and pump prices may adjust higher soon. Prices are 15-17 cents higher than this time last year.

“It’s not apocalyptic,” Jenkins said, not like the highest price of $4.08 in July 2008, but a lot of factors are hurting supply. “It’s definitely a challenging time.”

Highlands County crossed the 7,000 threshold for new cases of infections from COVID-19 when the reports from the Florida Department of Health were released on Thursday. The 35 new cases for the day pushed the county’s total to 7,032.

It is worth mentioning that five out of the 35 new cases are in the 14 and younger range groups and three of those five are in the 0-4 age group.

The cases are comprised of 6,965 residents while the non-residents stayed at 67, which was the same as Thursday. There have been 189 new cases over the past seven days, giving an average daily total as 27.

There was one death reported overnight. There have now been 292 people who have died from COVID-19.

Testing was down considerably again. There were 306 tests processed with 271 negative results. The testing and new cases produced a positivity rate of 11.44%. That is way above the 5.95% from the previous day.

VaccinationsThe winter storms that have blanketed much of the nation has caused a delay in the shipment and delivery of vaccine supply to Highlands County. Because of this, the Saturday Point of Distribution (POD) event has been canceled. County staff is rescheduling all Saturday appointments for next week.

News Service of Florida reported Thursday afternoon that Publix Super Markets is also not scheduling appointments for first dose COVID-19 vaccinations because of a delivery delay of more than 200,000 doses. Publix did not say in a news release when it would reopen its online appointment portal.

Customers with already-scheduled appointments for second doses of the Moderna vaccine should arrive at the pharmacies as scheduled, Publix said.

State Division of Emergency Management Director Jared Moskowitz told The News Service of Florida on Tuesday that 208,000 first and second doses of Moderna vaccine had been delayed because of a storm that has battered parts of the country. Moskowitz said the storm had not affected the delivery of 132,000 first doses of Pfizer vaccine this week.

Through Tuesday, 2,487,055 people had been vaccinated, with more than 47% receiving the two-dose series, according to Florida Department of Health numbers. Publix has been a major player in providing vaccinations.

Statewide and across the nationStatewide, new coronavirus infections were down from the previous day at 5,117. The cases brought the new cumulative total to 1,849,744. Broken down, that is 1,816,108 residents who have been infected and 33,636 non-residents.

The number of new cases in the United States remained low, while deaths crept up a bit in the COVID Tracking Project’s Wednesday night report. There were 66,089 new cases, which is slightly higher than numbers seen the previous two days, although Monday’s holiday likely played a role in those numbers.

On. Jan. 13 there were 33 states which reported 500 or more cases per million people. On Wednesday there were none, with New Jersey having the highest rate at 472.

Based on Thursday’s early numbers, the national report should have comparable numbers, as California reported 5,573 new cases and 417 deaths, while Arizona showed an increase of 1,143 new cases and 213 deaths. Arizona had reported a combined 85 cases the three previous days.

According to the Johns Hopkins University Center for Systems Science and Engineering, the U.S. has seen 27.87 million cases and had 491,724 deaths.

Globally, there have been 110.1 million cases and 2.44 million deaths.