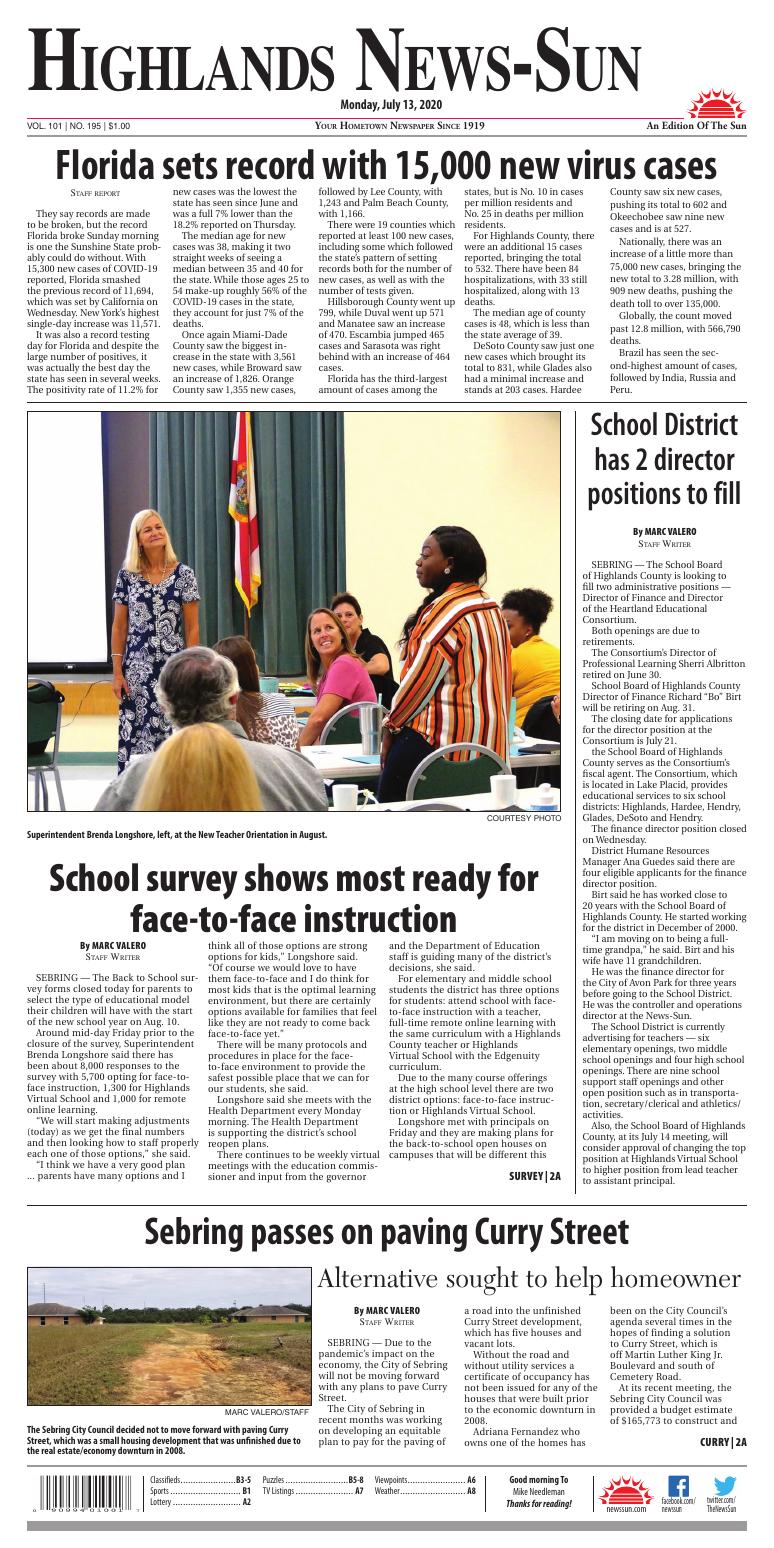 They say records are made to be broken, but the record Florida broke Sunday morning is one the Sunshine State probably could do without. With 15,300 new cases of COVID-19 reported, Florida smashed the previous record of 11,694, which was set by California on Wednesday. New York’s highest single-day increase was 11,571.

It was also a record testing day for Florida and despite the large number of positives, it was actually the best day the state has seen in several weeks. The positivity rate of 11.2% for new cases was the lowest the state has seen since June and was a full 7% lower than the 18.2% reported on Thursday.

The median age for new cases was 38, making it two straight weeks of seeing a median between 35 and 40 for the state. While those ages 25 to 54 make-up roughly 56% of the COVID-19 cases in the state, they account for just 7% of the deaths.

There were 19 counties which reported at least 100 new cases, including some which followed the state’s pattern of setting records both for the number of new cases, as well as with the number of tests given.

Hillsborough County went up 799, while Duval went up 571 and Manatee saw an increase of 470. Escambia jumped 465 cases and Sarasota was right behind with an increase of 464 cases.

For Highlands County, there were an additional 15 cases reported, bringing the total to 532. There have been 84 hospitalizations, with 33 still hospitalized, along with 13 deaths.

The median age of county cases is 48, which is less than the state average of 39.

Brazil has seen the second-highest amount of cases, followed by India, Russia and Peru.

Sebring High School teacher Julie Giordano is teaching the IB course, “History of the Americas” in this file photo. The majority of parents who filled out the School Board of Highlands County Back to School survey say they want their children to receive face-to-face instruction.

SEBRING — The Back to School survey forms closed today for parents to select the type of educational model their children will have with the start of the new school year on Aug. 10.

Around mid-day Friday prior to the closure of the survey, Superintendent Brenda Longshore said there has been about 8,000 responses to the survey with 5,700 opting for face-to-face instruction, 1,300 for Highlands Virtual School and 1,000 for remote online learning.

“We will start making adjustments (today) as we get the final numbers and then looking how to staff properly each one of those options,” she said.

“I think we have a very good plan ... parents have many options and I think all of those options are strong options for kids,” Longshore said. “Of course we would love to have them face-to-face and I do think for most kids that is the optimal learning environment, but there are certainly options available for families that feel like they are not ready to come back face-to-face yet.”

There will be many protocols and procedures in place for the face-to-face environment to provide the safest possible place that we can for our students, she said.

There continues to be weekly virtual meetings with the education commissioner and input from the governor and the Department of Education staff is guiding many of the district’s decisions, she said.

For elementary and middle school students the district has three options for students: attend school with face-to-face instruction with a teacher, full-time remote online learning with the same curriculum with a Highlands County teacher or Highlands Virtual School with the Edgenuity curriculum.

Due to the many course offerings at the high school level there are two district options: face-to-face instruction or Highlands Virtual School.

Longshore met with principals on Friday and they are making plans for the back-to-school open houses on campuses that will be different this year.

The open houses may involve kindergartners and some sixth-graders and some ninth-graders, she said. Every school is making decisions on the best way to handle that.

“But, we won’t have the big open houses this year where all of the families come in with all of their children into the school setting,” Longshore said. “It will be much more limited this year. It will certainly be structured much different than anything we have had in the past.”

The Sebring City Council decided not to move forward with paving Curry Street, which was a small housing development that was unfinished due to the real estate/economy downturn in 2008.

SEBRING — Due to the pandemic’s impact on the economy, the City of Sebring will not be moving forward with any plans to pave Curry Street.

The City of Sebring in recent months was working on developing an equitable plan to pay for the paving of a road into the unfinished Curry Street development, which has five houses and vacant lots.

Without the road and without utility services a certificate of occupancy has not been issued for any of the houses that were built prior to the economic downturn in 2008.

Adriana Fernandez who owns one of the homes has been on the City Council’s agenda several times in the hopes of finding a solution to Curry Street, which is off Martin Luther King Jr. Boulevard and south of Cemetery Road.

At its recent meeting, the Sebring City Council was provided a budget estimate of $165,773 to construct and asphalt road, which does not include the cost of a cul-de-sac. Additional right-of-way would have to be obtained for the cul-de-sac.

The estimate does not include the cost to construct a retention pond, which would require additional property.

The design and engineering of paving Curry Street would cost $26,500 according to a proposal from Poltson engineering for a total estimated cost for an asphalt road of $192,273.

City Manager Scott Noethlich said the City Council decided not to move forward with any plans for paving Curry Street.

Council just didn’t feel it was prudent at this time to spend that kind of money in the current economic situation especially with revenues falling due to COVID-19, he said. Also, it is probably too much money to spend anyway because it is not known how much the City will recover in its costs, not knowing how the development will progress.

From a financial perspective Council didn’t want to burden the taxpayers with a road that may only benefit one property owner or two or three property owners.

There is a vacant parcel located behind Fernandez’s house, which could be utilized to access her property, Noethlich said. “We are going to assist her with getting in touch with that property owner and see whether or not some type of solution could be worked out that way.”

SEBRING — The School Board of Highlands County is looking to fill two administrative positions — Director of Finance and Director of the Heartland Educational Consortium.

Both openings are due to retirements.

School Board of Highlands County Director of Finance Richard “Bo” Birt will be retiring on Aug. 31.

The closing date for applications for the director position at the Consortium is July 21.

the School Board of Highlands County serves as the Consortium’s fiscal agent. The Consortium, which is located in Lake Placid, provides educational services to six school districts: Highlands, Hardee, Hendry, Glades, DeSoto and Hendry.

Birt said he has worked close to 20 years with the School Board of Highlands County. He started working for the district in December of 2000.

“I am moving on to being a full-time grandpa,” he said. Birt and his wife have 11 grandchildren.

He was the finance director for the City of Avon Park for three years before going to the School District. He was the controller and operations director at the News-Sun.

The School District is currently advertising for teachers — six elementary openings, two middle school openings and four high school openings. There are nine school support staff openings and other open position such as in transportation, secretary/clerical and athletics/activities.

Also, the School Board of Highlands County, at its July 14 meeting, will consider approval of changing the top position at Highlands Virtual School to higher position from lead teacher to assistant principal. 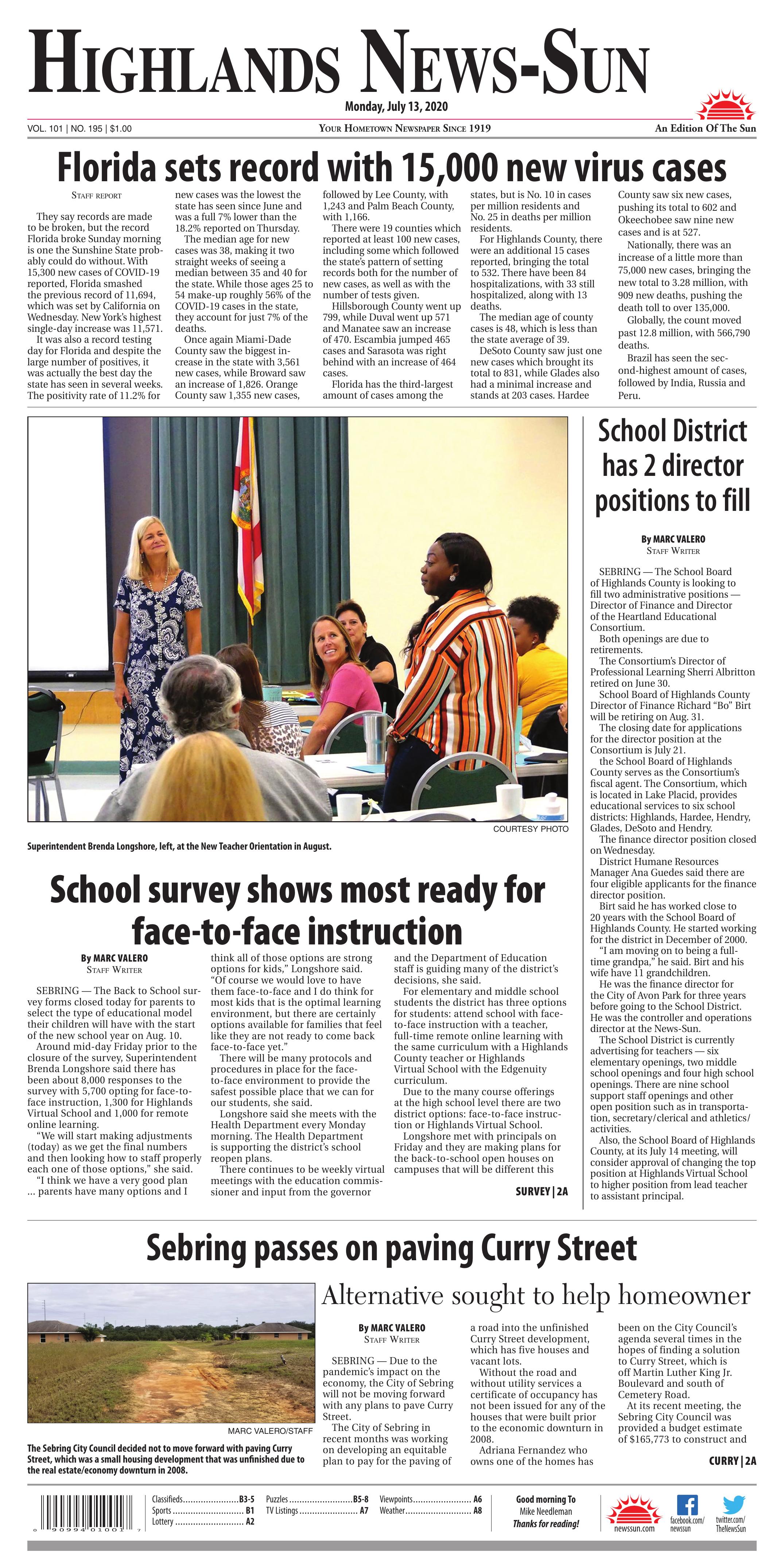