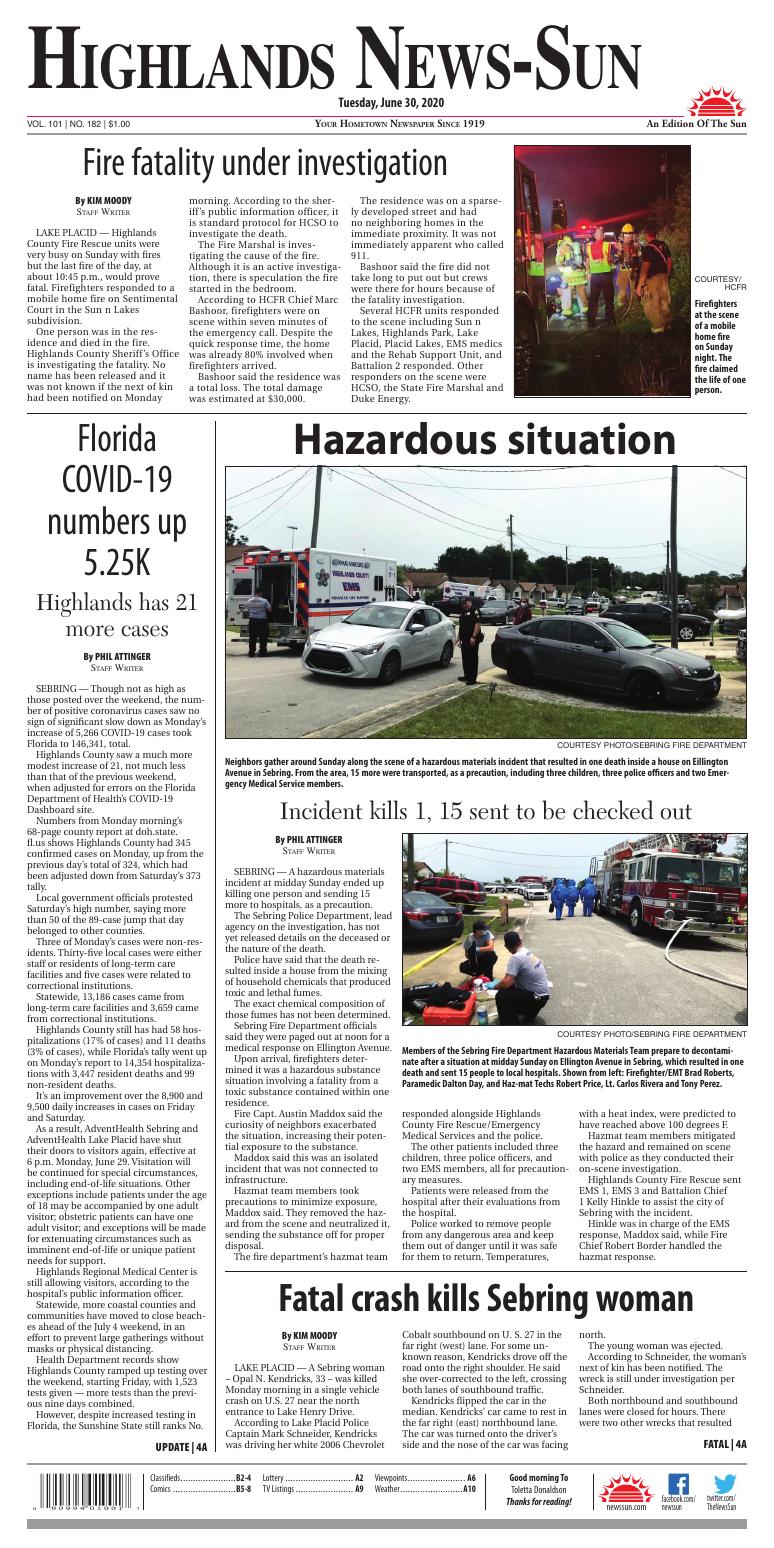 LAKE PLACID — Highlands County Fire Rescue units were very busy on Sunday with fires but the last fire of the day, at about 10:45 p.m., would prove fatal. Firefighters responded to a mobile home fire on Sentimental Court in the Sun n Lakes subdivision.

One person was in the residence and died in the fire. Highlands County Sheriff’s Office is investigating the fatality. No name has been released and it was not known if the next of kin had been notified on Monday morning. According to the sheriff’s public information officer, it is standard protocol for HCSO to investigate the death.

The Fire Marshal is investigating the cause of the fire. Although it is an active investigation, there is speculation the fire started in the bedroom.

According to HCFR Chief Marc Bashoor, firefighters were on scene within seven minutes of the emergency call. Despite the quick response time, the home was already 80% involved when firefighters arrived.

Bashoor said the residence was a total loss. The total damage was estimated at $30,000.

The residence was on a sparsely developed street and had no neighboring homes in the immediate proximity. It was not immediately apparent who called 911.

Bashoor said the fire did not take long to put out but crews were there for hours because of the fatality investigation.

Neighbors gather around Sunday along the scene of a hazardous materials incident that resulted in one death inside a house on Eillington Avenue in Sebring. From the area, 15 more were transported, as a precaution, including three children, three police officers and two Emergency Medical Service members.

SEBRING — A hazardous materials incident at midday Sunday ended up killing one person and sending 15 more to hospitals, as a precaution.

The Sebring Police Department, lead agency on the investigation, has not yet released details on the deceased or the nature of the death.

Police have said that the death resulted inside a house from the mixing of household chemicals that produced toxic and lethal fumes.

The exact chemical composition of those fumes has not been determined.

Sebring Fire Department officials said they were paged out at noon for a medical response on Ellington Avenue.

Upon arrival, firefighters determined it was a hazardous substance situation involving a fatality from a toxic substance contained within one residence.

Fire Capt. Austin Maddox said the curiosity of neighbors exacerbated the situation, increasing their potential exposure to the substance.

Maddox said this was an isolated incident that was not connected to infrastructure.

Hazmat team members took precautions to minimize exposure, Maddox said. They removed the hazard from the scene and neutralized it, sending the substance off for proper disposal.

Police worked to remove people from any dangerous area and keep them out of danger until it was safe for them to return. Temperatures, with a heat index, were predicted to have reached above 100 degrees F.

Hazmat team members mitigated the hazard and remained on scene with police as they conducted their on-scene investigation.

Hinkle was in charge of the EMS response, Maddox said, while Fire Chief Robert Border handled the hazmat response.

According to Lake Placid Police Captain Mark Schneider, Kendricks was driving her white 2006 Chevrolet Cobalt southbound on U. S. 27 in the far right (west) lane. For some unknown reason, Kendricks drove off the road onto the right shoulder. He said she over-corrected to the left, crossing both lanes of southbound traffic.

Kendricks flipped the car in the median. Kendricks’ car came to rest in the far right (east) northbound lane. The car was turned onto the driver’s side and the nose of the car was facing north.

The young woman was ejected.

According to Schneider, the woman’s next of kin has been notified. The wreck is still under investigation per Schneider.

Both northbound and southbound lanes were closed for hours. There were two other wrecks that resulted from traffic backups. The other wrecks were not serious.

SEBRING — Though not as high as those posted over the weekend, the number of positive coronavirus cases saw no sign of significant slow down as Monday’s increase of 5,266 COVID-19 cases took Florida to 146,341, total.

Highlands County saw a much more modest increase of 21, not much less than that of the previous weekend, when adjusted for errors on the Florida Department of Health’s COVID-19 Dashboard site.

Numbers from Monday morning’s 68-page county report at doh.state.fl.us shows Highlands County had 345 confirmed cases on Monday, up from the previous day’s total of 324, which had been adjusted down from Saturday’s 373 tally.

Local government officials protested Saturday’s high number, saying more than 50 of the 89-case jump that day belonged to other counties.

Three of Monday’s cases were non-residents. Thirty-five local cases were either staff or residents of long-term care facilities and five cases were related to correctional institutions.

It’s an improvement over the 8,900 and 9,500 daily increases in cases on Friday and Saturday.

As a result, AdventHealth Sebring and AdventHealth Lake Placid have shut their doors to visitors again, effective at 6 p.m. Monday, June 29. Visitation will be continued for special circumstances, including end-of-life situations. Other exceptions include patients under the age of 18 may be accompanied by one adult visitor; obstetric patients can have one adult visitor; and exceptions will be made for extenuating circumstances such as imminent end-of-life or unique patient needs for support.

Statewide, more coastal counties and communities have moved to close beaches ahead of the July 4 weekend, in an effort to prevent large gatherings without masks or physical distancing.

However, despite increased testing in Florida, the Sunshine State still ranks No. 32 in tests given per million population.

It was the state’s only single-county four-digit increase.

Among neighboring counties, DeSoto County has seen greater than an 11% positive testing rate every day for the last two weeks and is up to 600 cases, an increase of 15 on Sunday.

Hardee County has also exceeded an 11% positive-result threshold the past two weeks and now stands at 426 cases, also up 15.

Glades County has seen 167 positive cases, while doing far less testing than Highlands County, and 79 of those cases are related to a correctional facility.

Okeechobee County has seen 80 new cases the past five days and now has seen 360 positive cases.

Nationally, according to the Centers for Disease Control and Prevention, the United States now has almost 2.55 million cases, up 41,075. 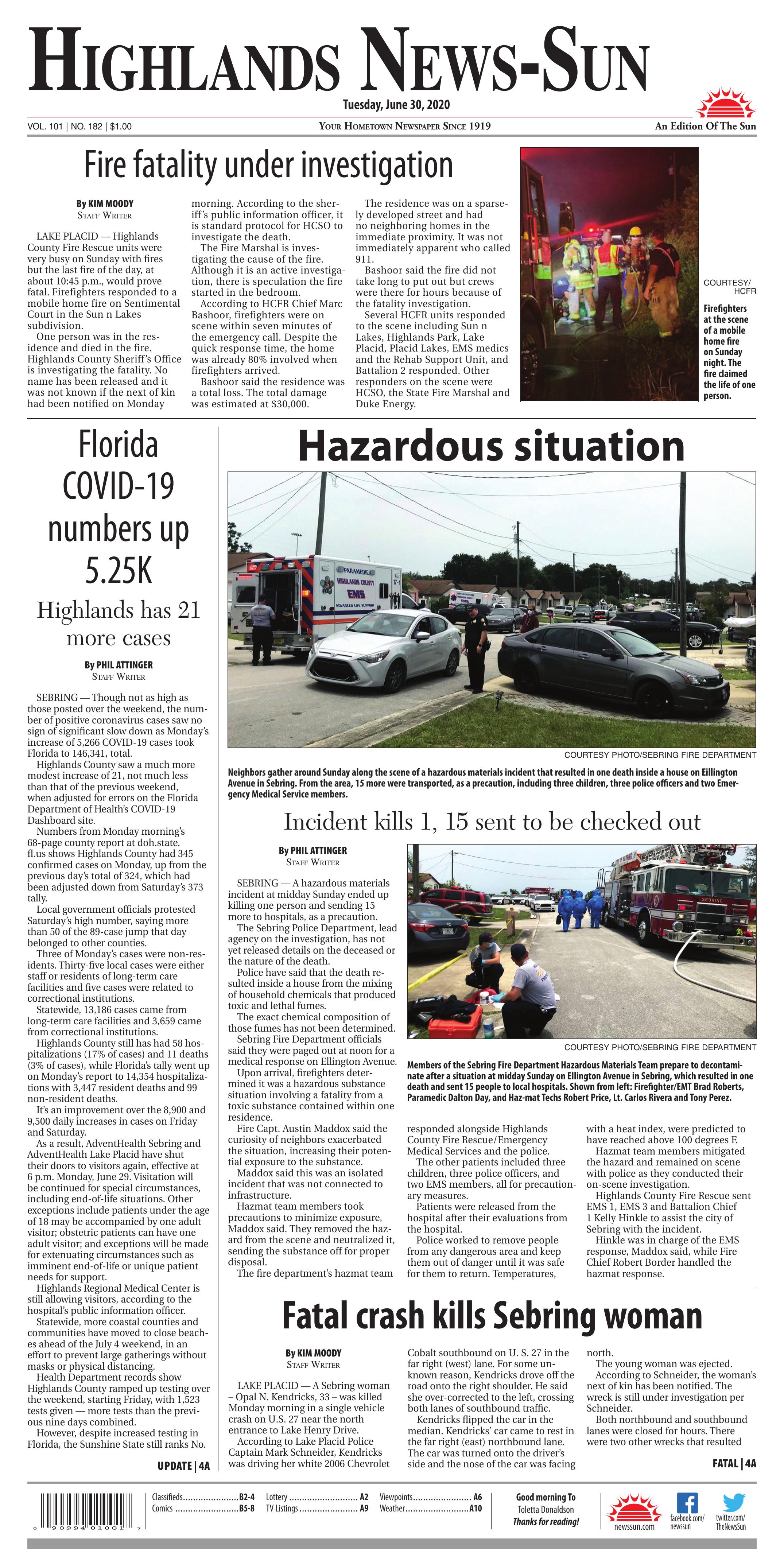