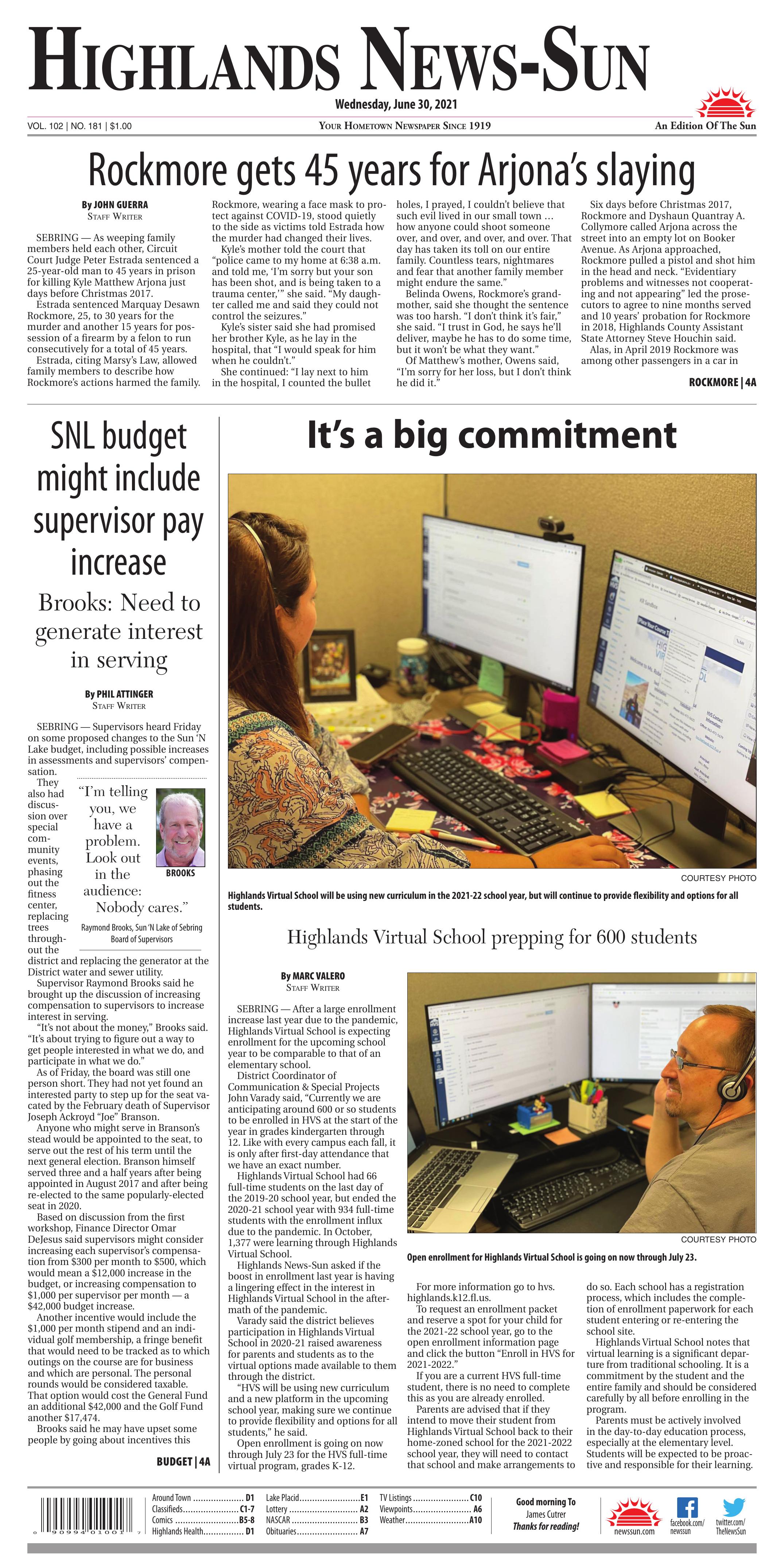 Estrada sentenced Marquay Desawn Rockmore, 25, to 30 years for the murder and another 15 years for possession of a firearm by a felon to run consecutively for a total of 45 years.

Estrada, citing Marsy’s Law, allowed family members to describe how Rockmore’s actions harmed the family. Rockmore, wearing a face mask to protect against COVID-19, stood quietly to the side as victims told Estrada how the murder had changed their lives.

Kyle’s mother told the court that “police came to my home at 6:38 a.m. and told me, ‘I’m sorry but your son has been shot, and is being taken to a trauma center,’” she said. “My daughter called me and said they could not control the seizures.”

Kyle’s sister said she had promised her brother Kyle, as he lay in the hospital, that “I would speak for him when he couldn’t.”

She continued: “I lay next to him in the hospital, I counted the bullet holes, I prayed, I couldn’t believe that such evil lived in our small town … how anyone could shoot someone over, and over, and over, and over. That day has taken its toll on our entire family. Countless tears, nightmares and fear that another family member might endure the same.”

Belinda Owens, Rockmore’s grandmother, said she thought the sentence was too harsh. “I don’t think it’s fair,” she said. “I trust in God, he says he’ll deliver, maybe he has to do some time, but it won’t be what they want.”

Of Matthew’s mother, Owens said, “I’m sorry for her loss, but I don’t think he did it.”

Six days before Christmas 2017, Rockmore and Dyshaun Quantray A. Collymore called Arjona across the street into an empty lot on Booker Avenue. As Arjona approached, Rockmore pulled a pistol and shot him in the head and neck. “Evidentiary problems and witnesses not cooperating and not appearing” led the prosecutors to agree to nine months served and 10 years’ probation for Rockmore in 2018, Highlands County Assistant State Attorney Steve Houchin said.

Alas, in April 2019 Rockmore was among other passengers in a car in which Highland County Sheriff’s deputies found drugs and a .357 pistol with its serial number scored away. On May 11, though a jury cleared him of gun and drug possession, a judge found him in violation of his probation. Prosecutors and Rockmore’s defense lawyer subsequently negotiated a plea deal, agreeing to let Estrada sentence Rockmore at a later date.

That date came on Tuesday afternoon.

“We’re satisfied with the sentence,” Kyle’s sister told the Highlands News-Sun. “But it won’t bring [Kyle] back, nor completely heal the families he [Rockmore] has ruined.”

Open enrollment for Highlands Virtual School is going on now through July 23.

Highlands Virtual School will be using new curriculum in the 2021-22 school year, but will continue to provide flexibility and options for all students.

SEBRING — After a large enrollment increase last year due to the pandemic, Highlands Virtual School is expecting enrollment for the upcoming school year to be comparable to that of an elementary school.

District Coordinator of Communication & Special Projects John Varady said, “Currently we are anticipating around 600 or so students to be enrolled in HVS at the start of the year in grades kindergarten through 12. Like with every campus each fall, it is only after first-day attendance that we have an exact number.

Highlands News-Sun asked if the boost in enrollment last year is having a lingering effect in the interest in Highlands Virtual School in the aftermath of the pandemic.

Varady said the district believes participation in Highlands Virtual School in 2020-21 raised awareness for parents and students as to the virtual options made available to them through the district.

“HVS will be using new curriculum and a new platform in the upcoming school year, making sure we continue to provide flexibility and options for all students,” he said.

Open enrollment is going on now through July 23 for the HVS full-time virtual program, grades K-12.

For more information go to hvs.highlands.k12.fl.us.

To request an enrollment packet and reserve a spot for your child for the 2021-22 school year, go to the open enrollment information page and click the button “Enroll in HVS for 2021-2022.”

If you are a current HVS full-time student, there is no need to complete this as you are already enrolled.

Parents are advised that if they intend to move their student from Highlands Virtual School back to their home-zoned school for the 2021-2022 school year, they will need to contact that school and make arrangements to do so. Each school has a registration process, which includes the completion of enrollment paperwork for each student entering or re-entering the school site.

Highlands Virtual School notes that virtual learning is a significant departure from traditional schooling. It is a commitment by the student and the entire family and should be considered carefully by all before enrolling in the program.

Parents must be actively involved in the day-to-day education process, especially at the elementary level. Students will be expected to be proactive and responsible for their learning.

SEBRING — Supervisors heard Friday on some proposed changes to the Sun ‘N Lake budget, including possible increases in assessments and supervisors’ compensation.

They also had discussion over special community events, phasing out the fitness center, replacing trees throughout the district and replacing the generator at the District water and sewer utility.

Supervisor Raymond Brooks said he brought up the discussion of increasing compensation to supervisors to increase interest in serving.

“It’s not about the money,” Brooks said. “It’s about trying to figure out a way to get people interested in what we do, and participate in what we do.”

As of Friday, the board was still one person short. They had not yet found an interested party to step up for the seat vacated by the February death of Supervisor Joseph Ackroyd “Joe” Branson.

Anyone who might serve in Branson’s stead would be appointed to the seat, to serve out the rest of his term until the next general election. Branson himself served three and a half years after being appointed in August 2017 and after being re-elected to the same popularly-elected seat in 2020.

Based on discussion from the first workshop, Finance Director Omar DeJesus said supervisors might consider increasing each supervisor’s compensation from $300 per month to $500, which would mean a $12,000 increase in the budget, or increasing compensation to $1,000 per supervisor per month — a $42,000 budget increase.

Another incentive would include the $1,000 per month stipend and an individual golf membership, a fringe benefit that would need to be tracked as to which outings on the course are for business and which are personal. The personal rounds would be considered taxable. That option would cost the General Fund an additional $42,000 and the Golf Fund another $17,474.

Brooks said he may have upset some people by going about incentives this way, and apologized for that, if he did.

“I’m telling you, we have a problem. Look out in the audience,” he said gesturing to an almost empty room. “Nobody cares.”

Another $2.41 million would come in from charges for water and sewer services, with $359,125 from other income and $25,000 in investment earnings. Sun ‘N Lake also expects to see $2.64 million in golf memberships and course fees and another $1.27 million in food and beverage revenue, including Island View Restaurant.

Estimates for the Golf Fund include $2.4 million in golf operations, $1.5 million in restaurant operations and $454,235 in capital outlay.

Capital projects, outside those funds, are expected to run at $2.95 million.

DeJesus had, under discussion items, a 4% increase to the Special Improvement District assessment, rather than 1.5%, as suggested in the first proposal at an earlier workshop. It would bring in an estimated $80,000 more revenue.

Another possible budget increase with regard to pay would include an employee merit pay increase from 3% to 4%. a total budget impact of $50,000.

"I'm telling you, we have a problem. Look out in the audience: Nobody cares."

Raymond Brooks, Sun 'N Lake of Sebring Board of Supervisors