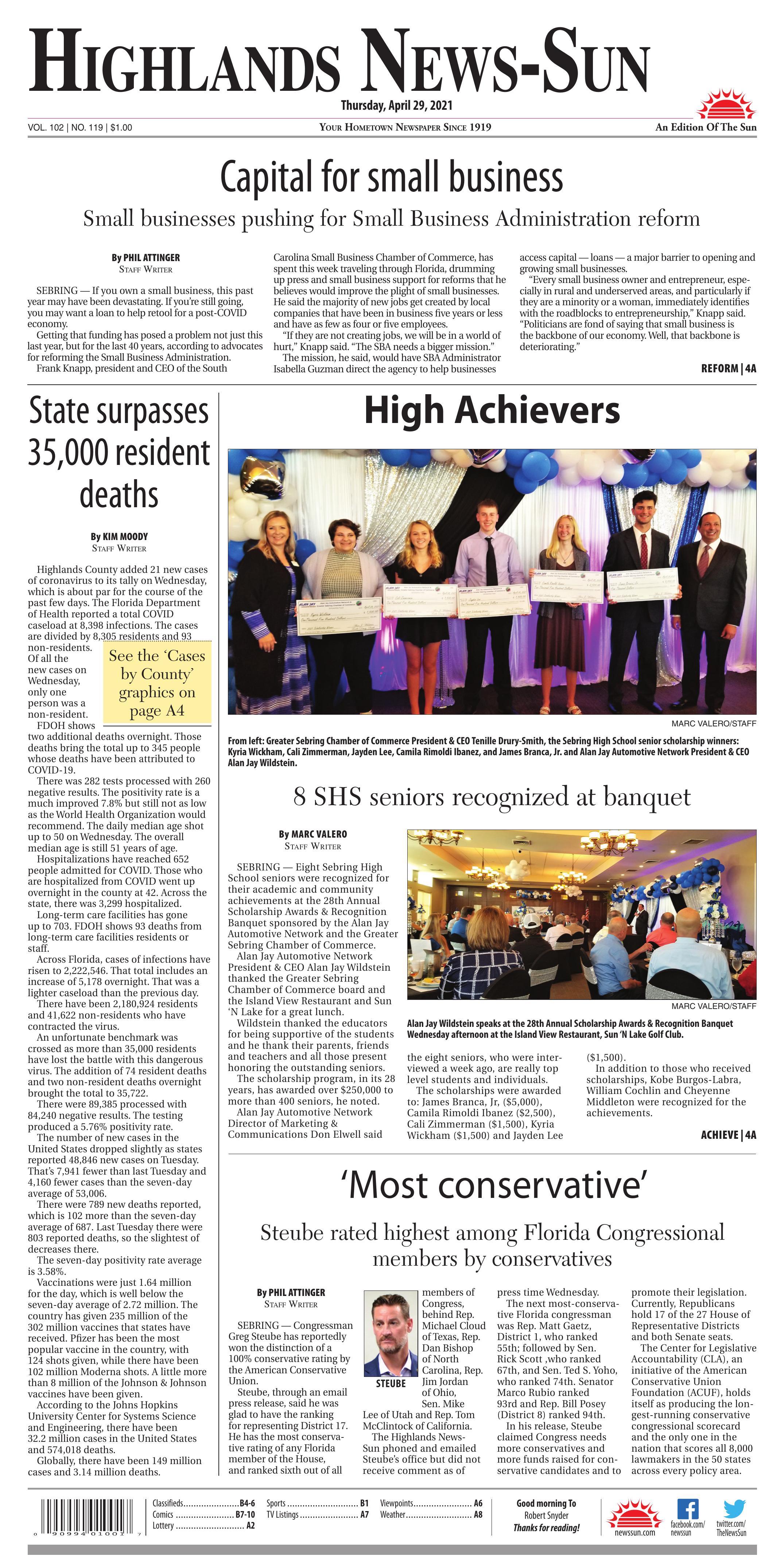 SEBRING — If you own a small business, this past year may have been devastating. If you’re still going, you may want a loan to help retool for a post-COVID economy.

Getting that funding has posed a problem not just this last year, but for the last 40 years, according to advocates for reforming the Small Business Administration.

Frank Knapp, president and CEO of the South Carolina Small Business Chamber of Commerce, has spent this week traveling through Florida, drumming up press and small business support for reforms that he believes would improve the plight of small businesses. He said the majority of new jobs get created by local companies that have been in business five years or less and have as few as four or five employees.

“If they are not creating jobs, we will be in a world of hurt,” Knapp said. “The SBA needs a bigger mission.”

The mission, he said, would have SBA Administrator Isabella Guzman direct the agency to help businesses access capital — loans — a major barrier to opening and growing small businesses.

“Every small business owner and entrepreneur, especially in rural and underserved areas, and particularly if they are a minority or a woman, immediately identifies with the roadblocks to entrepreneurship,” Knapp said. “Politicians are fond of saying that small business is the backbone of our economy. Well, that backbone is deteriorating.”

In rural areas, Knapp said, businesses have lost their banks, from 14,400 in 1980 down to 4,600 now as a result of consolidations and failures. Highlands County has at least two locally-owned and operated banks — First Southern Bank in downtown Sebring and Heartland National Bank — and at least a half dozen corporate banks, but Knapp said they all “risk aversion.”

Knapp said small businesses’ confidence that they can get loans dropped from 50% in March 2020 to 37% one year later. A bread maker he met on his tour of Florida went through seven banks before getting a loan because of the inherent risks of opening a new business. The Small Business Administration has a loan guarantee program, Knapp said, it only covers 85% of the loss. A bank could still face a potential 15% loss along with lost administrative costs.

There are also Community Development Financial Institutions (CDFI), but Knapp said only 203 out of 1,058 provide small business startup loans. He cited SBA statistics that in fiscal year 2020, the nation’s 175 SBA-approved small business micro lenders made 5,890 loans averaging $14,434 — just 33.4 loans per lender per year.

“That’s not anywhere near the volume of startup capital [businesses] need,” Knapp said, citing an estimate of $10,000 for a small business startup loan and a $3,000 loan to startup a “micro-business,” one with no more than two employees.

Changes he and others would like to see include, but are not limited to:

- A direct federal small-business loan program — under $20,000 each — for entrepreneurs and micro businesses, including requirements for owners to get all manner of training in running their business.

- Dramatically increase resources for the SBA Office of the National Ombudsman to educate small businesses on regulations, instead of penalizing them.

Legislation is currently in the works by U.S. Senators Tim Scott (R-South Carolina) and Amy Klobuchar (D-Minnesota) to provide some of the reforms he’s suggested. Knapp said people can get more details from ReformtheSBA.com or contact him at fknapp@scsbc.org.

SEBRING — Eight Sebring High School seniors were recognized for their academic and community achievements at the 28th Annual Scholarship Awards & Recognition Banquet sponsored by the Alan Jay Automotive Network and the Greater Sebring Chamber of Commerce.

Wildstein thanked the educators for being supportive of the students and he thank their parents, friends and teachers and all those present honoring the outstanding seniors.

In addition to those who received scholarships, Kobe Burgos-Labra, William Cochlin and Cheyenne Middleton were recognized for the achievements.

All the seniors received gift bags that included restaurant and store gift cards and other items from some of the scholarship fund donors.

During the event those present donated $5,660 toward the scholarship fund. Wildstein, who usually matches the amount donated, said he would add $10,000 to the fund.

Wildstein thanked Lani’s Rentals for Weddings & Special Events and Sealed with an X for doing all the decorations for the banquet.

Wildstein also thanked David and Allison Willey, who sponsor the luncheon every year. He noted that even last year, when there was no luncheon, the community supported the scholarship program and the scholarships were awarded and the Willey’s donated the value of the luncheon, which was significant.

SEBRING — Congressman Greg Steube has reportedly won the distinction of a 100% conservative rating by the American Conservative Union.

Steube, through an email press release, said he was glad to have the ranking for representing District 17. He has the most conservative rating of any Florida member of the House, and ranked sixth out of all members of Congress, behind Rep. Michael Cloud of Texas, Rep. Dan Bishop of North Carolina, Rep. Jim Jordan of Ohio, Sen. Mike Lee of Utah and Rep. Tom McClintock of California.

The Highlands News-Sun phoned and emailed Steube’s office but did not receive comment as of press time Wednesday.

In his release, Steube claimed Congress needs more conservatives and more funds raised for conservative candidates and to promote their legislation. Currently, Republicans hold 17 of the 27 House of Representative Districts and both Senate seats.

The Center for Legislative Accountability (CLA), an initiative of the American Conservative Union Foundation (ACUF), holds itself as producing the longest-running conservative congressional scorecard and the only one in the nation that scores all 8,000 lawmakers in the 50 states across every policy area.

Highlands County added 21 new cases of coronavirus to its tally on Wednesday, which is about par for the course of the past few days. The Florida Department of Health reported a total COVID caseload at 8,398 infections. The cases are divided by 8,305 residents and 93 non-residents. Of all the new cases on Wednesday, only one person was a non-resident.

FDOH shows two additional deaths overnight. Those deaths bring the total up to 345 people whose deaths have been attributed to COVID-19.

There was 282 tests processed with 260 negative results. The positivity rate is a much improved 7.8% but still not as low as the World Health Organization would recommend. The daily median age shot up to 50 on Wednesday. The overall median age is still 51 years of age.

Hospitalizations have reached 652 people admitted for COVID. Those who are hospitalized from COVID went up overnight in the county at 42. Across the state, there was 3,299 hospitalized.

Across Florida, cases of infections have risen to 2,222,546. That total includes an increase of 5,178 overnight. That was a lighter caseload than the previous day.

An unfortunate benchmark was crossed as more than 35,000 residents have lost the battle with this dangerous virus. The addition of 74 resident deaths and two non-resident deaths overnight brought the total to 35,722.

The number of new cases in the United States dropped slightly as states reported 48,846 new cases on Tuesday. That’s 7,941 fewer than last Tuesday and 4,160 fewer cases than the seven-day average of 53,006.

There were 789 new deaths reported, which is 102 more than the seven-day average of 687. Last Tuesday there were 803 reported deaths, so the slightest of decreases there.

The seven-day positivity rate average is 3.58%.

Vaccinations were just 1.64 million for the day, which is well below the seven-day average of 2.72 million. The country has given 235 million of the 302 million vaccines that states have received. Pfizer has been the most popular vaccine in the country, with 124 shots given, while there have been 102 million Moderna shots. A little more than 8 million of the Johnson & Johnson vaccines have been given.

According to the Johns Hopkins University Center for Systems Science and Engineering, there have been 32.2 million cases in the United States and 574,018 deaths.

Globally, there have been 149 million cases and 3.14 million deaths.