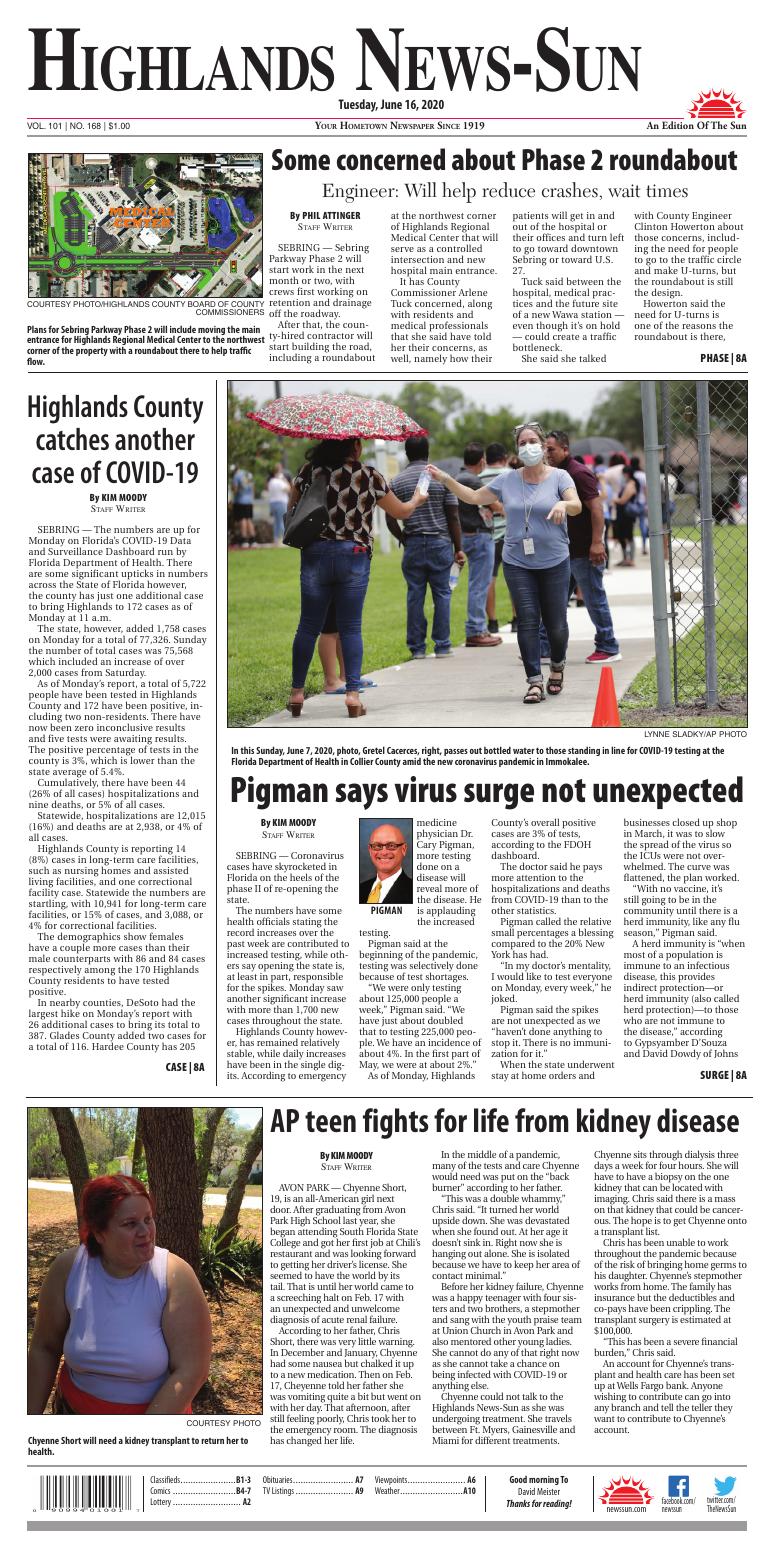 Plans for Sebring Parkway Phase 2 will include moving the main entrance for Highlands Regional Medical Center to the northwest corner of the property with a roundabout there to help traffic flow. County Engineer Clinton Howerton Jr. said a two-lane roundabout there will reduce risk of T-bone collisions and help traffic flow between U.S. 27, to the right, and DeSoto Road, out of frame to the left.

SEBRING — Sebring Parkway Phase 2 will start work in the next month or two, with crews first working on retention and drainage off the roadway.

After that, the county-hired contractor will start building the road, including a roundabout at the northwest corner of Highlands Regional Medical Center that will serve as a controlled intersection and new hospital main entrance.

It has County Commissioner Arlene Tuck concerned, along with residents and medical professionals that she said have told her their concerns, as well, namely how their patients will get in and out of the hospital or their offices and turn left to go toward downtown Sebring or toward U.S. 27.

Tuck said between the hospital, medical practices and the future site of a new Wawa station — even though it’s on hold — could create a traffic bottleneck.

She said she talked with County Engineer Clinton Howerton about those concerns, including the need for people to go to the traffic circle and make U-turns, but the roundabout is still the design.

Howerton said the need for U-turns is one of the reasons the roundabout is there, instead of a signalized intersection.

With a standard intersection, he said, there would be no way to build in a turning radius wide enough to let cars turn around. A roundabout, however, already has that radius built-in, and all cars have to do is drive around it.

Older people are not used to this, said Tuck, who said she herself is 74 and was concerned about having people using the roundabout for U-turns.

She said her daughter, who lives in Whispering Pines Estates off Dale Mabry Highway in Tampa, has seen people approach a roundabout, and instead of turning right and circling counter-clockwise to get to a road to the left, they just turn left and take a shortcut going the wrong way.

A reporter with the Highlands News-Sun witnessed a northbound van doing just that at the Memorial Drive roundabout, turning left — the wrong way — to get to College Drive.

Howerton, who was giving the reporter a tour of Panther Parkway near its completion, also saw the van several months ago. He said Monday that he hadn’t heard of any wrecks involving roundabouts on the local parkway system, except for one.

The driver had flattened three tires and destroyed the car’s radiator, unaware, according to reports, of even having had a wreck.

Other than that, Howerton has repeatedly said he was not a fan of roundabouts at first. As Tuck said Monday, they are more expensive, up front, and like her, he also figured they would confuse people.

He said last year that a reduction in the number of car-versus-car wrecks at local intersections that use them has converted his view.

The only conflicts roundabouts should pose, as long as people turn right to enter them, is from people being side-swiped by drivers not waiting their turn to enter.

Some of the work to be done first, Howerton said, will include improvements on the hospital property, which is owned by the county and leased to the company operating the hospital.

Additional parking and access lanes will go in place on the north side of the property to help accommodate the northwest entrance off the roundabout. The current main entrance then, once the road is built and the median divider installed, will still allow left and right turns in, but only right turns out.

The project did see a slight cost savings this month, at least for the county.

In a consent agenda item — one voted on en masse with others without discussion — the Board of County Commission voted to amend an approved contract between the county and Bergeron Land Development Inc. for the Sebring Parkway Phase 2 project.

The amendment reduced the $12.95 million contract amount by $149,824. That amount was already included with the total contract price as part of the agreement between Bergeron Land Development Inc. and the city of Sebring, Howerton said, to do utility relocation work.

In this Sunday, June 7, 2020, photo, Gretel Cacerces, right, passes out bottled water to those standing in line for COVID-19 testing at the Florida Department of Health in Collier County amid the new coronavirus pandemic in Immokalee.

In this Monday, June 8, 2020, photo, Flora Garcia arrives with her daughter Krislaya Trejo at the Florida Department of Health in Collier County to be tested for COVID-19 amid the new coronavirus pandemic in Immokalee. Garcia’s husband works as a roofer and tested positive for the virus.

SEBRING — Coronavirus cases have skyrocketed in Florida on the heels of the phase II of re-opening the state.

The numbers have some health officials stating the record increases over the past week are contributed to increased testing, while others say opening the state is, at least in part, responsible for the spikes. Monday saw another significant increase with more than 1,700 new cases throughout the state.

Highlands County however, has remained relatively stable, while daily increases have been in the single digits. According to emergency medicine physician Dr. Cary Pigman, more testing done on a disease will reveal more of the disease. He is applauding the increased testing.

Pigman said at the beginning of the pandemic, testing was selectively done because of test shortages.

As of Monday, Highlands County’s overall positive cases are 3% of tests, according to the FDOH dashboard.

The doctor said he pays more attention to the hospitalizations and deaths from COVID-19 than to the other statistics.

Pigman called the relative small percentages a blessing compared to the 20% New York has had.

“In my doctor’s mentality, I would like to test everyone on Monday, every week,” he joked.

Pigman said the spikes are not unexpected as we “haven’t done anything to stop it. There is no immunization for it.”

When the state underwent stay at home orders and businesses closed up shop in March, it was to slow the spread of the virus so the ICUs were not overwhelmed. The curve was flattened, the plan worked.

“With no vaccine, it’s still going to be in the community until there is a herd immunity, like any flu season,” Pigman said.

A herd immunity is “when most of a population is immune to an infectious disease, this provides indirect protection—or herd immunity (also called herd protection)—to those who are not immune to the disease,” according to Gypsyamber D’Souza and David Dowdy of Johns Hopkins Bloomberg School of Public Health.

According to them, 70-90% of the population has to be immune to have herd immunity, depending on how contagious the virus is. Like the flu, herd immunity does not last forever, just as a flu vaccine only lasts a season or two depending on the strain.

No matter the numbers the dashboard show, Pigman said, in his opinion, the cases of people exposed to COVID-19 are probably double or triple what is reported. He said there has been a big rise in the agricultural communities.

“We can’t be on lockdown forever,” Pigman said. “We have to work. The elderly should stay home. Be really careful if you have someone in the home that is old.”

Pigman reminded the public to practice social distancing, to wash their hands and use masks when coughing or in large crowds.

Chyenne Short will need a kidney transplant to return her to health.

AVON PARK — Chyenne Short, 19, is an all-American girl next door. After graduating from Avon Park High School last year, she began attending South Florida State College and got her first job at Chili’s restaurant and was looking forward to getting her driver’s license. She seemed to have the world by its tail. That is until her world came to a screeching halt on Feb. 17 with an unexpected and unwelcome diagnosis of acute renal failure.

According to her father, Chris Short, there was very little warning. In December and January, Chyenne had some nausea but chalked it up to a new medication. Then on Feb. 17, Cheyenne told her father she was vomiting quite a bit but went on with her day. That afternoon, after still feeling poorly, Chris took her to the emergency room. The diagnosis has changed her life.

In the middle of a pandemic, many of the tests and care Chyenne would need was put on the “back burner” according to her father.

“This was a double whammy,” Chris said. “It turned her world upside down. She was devastated when she found out. At her age it doesn’t sink in. Right now she is hanging out alone. She is isolated because we have to keep her area of contact minimal.”

Before her kidney failure, Chyenne was a happy teenager with four sisters and two brothers, a stepmother and sang with the youth praise team at Union Church in Avon Park and also mentored other young ladies. She cannot do any of that right now as she cannot take a chance on being infected with COVID-19 or anything else.

Chyenne could not talk to the Highlands News-Sun as she was undergoing treatment. She travels between Ft. Myers, Gainesville and Miami for different treatments. Chyenne sits through dialysis three days a week for four hours. She will have to have a biopsy on the one kidney that can be located with imaging. Chris said there is a mass on that kidney that could be cancerous. The hope is to get Chyenne onto a transplant list.

Chris has been unable to work throughout the pandemic because of the risk of bringing home germs to his daughter. Chyenne’s stepmother works from home. The family has insurance but the deductibles and co-pays have been crippling. The transplant surgery is estimated at $100,000.

“This has been a severe financial burden,” Chris said.

An account for Chyenne’s transplant and health care has been set up at Wells Fargo bank. Anyone wishing to contribute can go into any branch and tell the teller they want to contribute to Chyenne’s account.

SEBRING — The numbers are up for Monday on Florida’s COVID-19 Data and Surveillance Dashboard run by Florida Department of Health. There are some significant upticks in numbers across the State of Florida however, the county has just one additional case to bring Highlands to 172 cases as of Monday at 11 a.m.

As of Monday’s report, a total of 5,722 people have been tested in Highlands County and 172 have been positive, including two non-residents. There have now been zero inconclusive results and five tests were awaiting results. The positive percentage of tests in the county is 3%, which is lower than the state average of 5.4%.

The demographics show females have a couple more cases than their male counterparts with 86 and 84 cases respectively among the 170 Highlands County residents to have tested positive.

In nearby counties, DeSoto had the largest hike on Monday’s report with 26 additional cases to bring its total to 387. Glades County added two cases for a total of 116. Hardee County has 205 cases with the addition of the nine cases reported on Monday. Okeechobee County added six cases to its numbers and sits at 189 cases.

Another testing event will be from 9 a.m. to 3 p.m. on Saturday at Samaritan’s Touch at 3015 Herring Ave. in Sebring.

Nationally, there have been 2,105,482 cases according to Johns Hopkins University Center for Systems Science and Engineering and 15,998 deaths. 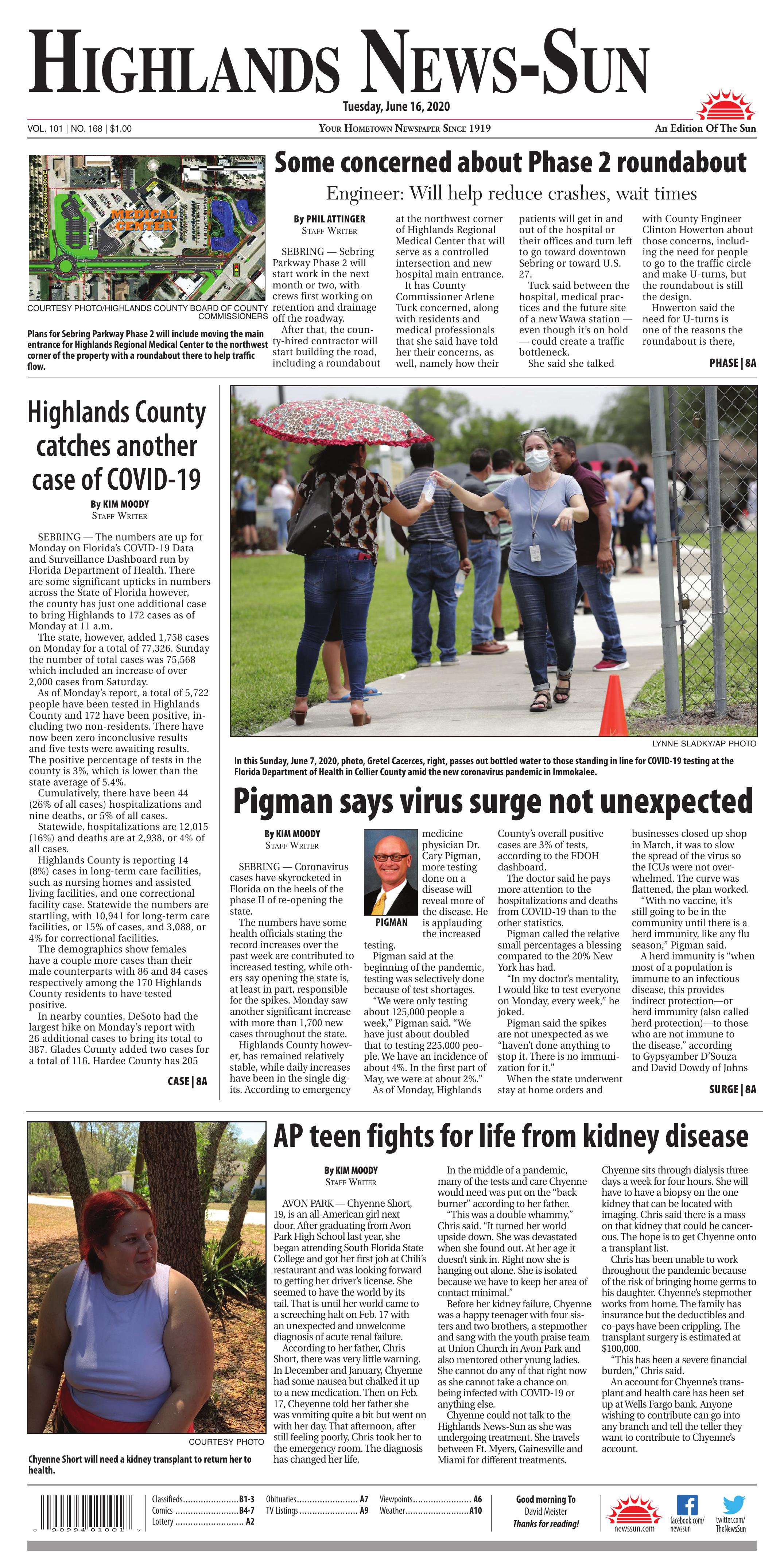