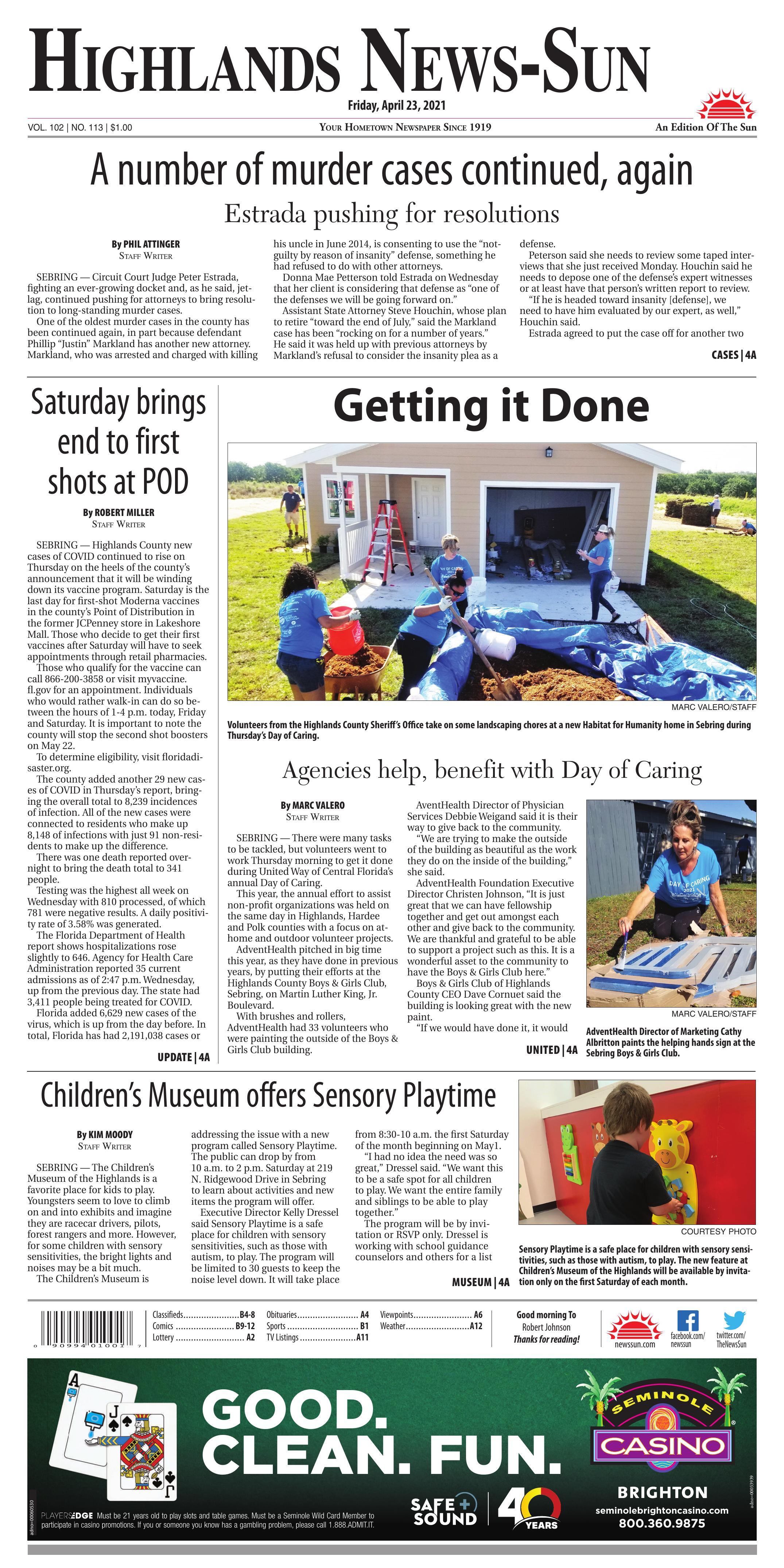 One of the oldest murder cases in the county has been continued again, in part because defendant Phillip “Justin” Markland has another new attorney. Markland, who was arrested and charged with killing his uncle in June 2014, is consenting to use the “not-guilty by reason of insanity” defense, something he had refused to do with other attorneys.

Donna Mae Petterson told Estrada on Wednesday that her client is considering that defense as “one of the defenses we will be going forward on.”

Assistant State Attorney Steve Houchin, whose plan to retire “toward the end of July,” said the Markland case has been “rocking on for a number of years.” He said it was held up with previous attorneys by Markland’s refusal to consider the insanity plea as a defense.

Peterson said she needs to review some taped interviews that she just received Monday. Houchin said he needs to depose one of the defense’s expert witnesses or at least have that person’s written report to review.

“If he is headed toward insanity [defense], we need to have him evaluated by our expert, as well,” Houchin said.

Estrada agreed to put the case off for another two months, and have another hearing at 1:15 p.m. June 23.

Authorities say that during a family gathering, Markland’s uncle Thomas Markland shot him. As the uncle then called 911 to get medical help for his nephew, Phillip Markland got a gun and shot his uncle multiple times, authorities said.

The case has gone back and forth since then over Phillip Markland’s competency to stand trial and his possible use of the stand your ground law as justification.

Another long-standing case, that of Ivan Sanders, has also been continued to 1:15 p.m. May 19. Attorney Hanna George, filling in for Gilberto Colon, said the only issue with scheduling a trial would be her associate’s ability to set that on his calendar, as he has other equally complex cases “back-to-back” until August.

Houchin said the state was ready to bring the case to trial last year prior to the pandemic, which postponed all pending trials and continues to play havoc with jury selection. Rescheduling experts is also a challenge, he said, as many have to rearrange their professional schedules six to eight weeks in advance.

If this case runs past July, Houchin said, Assistant State Attorney John Krumholz will take it over. Sanders is accused of beating his girlfriend’s 4-year-old daughter so severely in November 2014 that the child died from her injuries.

Sanders has changed attorneys three times, which has contributed to the delays. Houchin expects jury selection in Sanders’ case to take a week by itself.

Houchin said he has the murder trial of Daryl Dennard Cason rescheduled for May. Cason is accused in the Oct. 9, 2016 shooting death of Aaron Hankerson. He was originally set for trial in March, but the court could not draw a large enough jury pool for his case, thanks in part to economic issues caused by COVID-19.

Conversely, Houchin said he doesn’t have a tentative court date for Virgil West, charged with first-degree murder in the July 2015 death of Shawn Ziegler and attempted murder of Carrie Ann Leaphart.

Another high-profile case has also been continued to the afternoon court on May 19. Samuel Joseph Tucker’s attorney in his vehicular manslaughter case has motions to suppress certain statements from the evidence record and also has to add a crash reconstruction expert to the witness list.

In the early morning hours of July 24, 2017, Tucker was in a drunk-driving crash that took the life of his passenger, 22-year-old Alyssa Kay Vice. He was charged with manslaughter while driving under the influence and two counts of DUI property damage. However, the case was held up when Tucker fled to Ireland shortly after the wreck. It took the better part of two years to get him back with the help of U.S. Marshals and the High Court in Cork, Ireland, where he was found.

Volunteers from the Highlands County Sheriff’s Office take on some landscaping chores at a new Habitat for Humanity home in Sebring during Thursday’s Day of Caring.

AdventHealth volunteers paint the Sebring Boys & Girls Club building on Thursday morning as part of the annual Day of Caring sponsored by the United Way of Central Florida.

Highlands County Sheriff’s Office volunteers lay sod at a new Habitat for Humanity home in Sebring as part of the annual Day of Caring.

SEBRING — There were many tasks to be tackled, but volunteers went to work Thursday morning to get it done during United Way of Central Florida’s annual Day of Caring.

This year, the annual effort to assist non-profit organizations was held on the same day in Highlands, Hardee and Polk counties with a focus on at-home and outdoor volunteer projects.

AdventHealth pitched in big time this year, as they have done in previous years, by putting their efforts at the Highlands County Boys & Girls Club, Sebring, on Martin Luther King, Jr. Boulevard.

With brushes and rollers, AdventHealth had 33 volunteers who were painting the outside of the Boys & Girls Club building.

AventHealth Director of Physician Services Debbie Weigand said it is their way to give back to the community.

AdventHealth Foundation Executive Director Christen Johnson, “It is just great that we can have fellowship together and get out amongst each other and give back to the community. We are thankful and grateful to be able to support a project such as this. It is a wonderful asset to the community to have the Boys & Girls Club here.”

“If we would have done it, it would have taken a long time,” he said. “This all-in-one bunches of people with paint brushes really works well. These people are fantastic!”

Not too far away off Martin Luther King, Jr. Boulevard on Inspiration Drive, volunteers from the Highlands County Sheriff’s Office worked at a new Habitat for Humanity home.

Habitat Construction Manager Frank Nelson said they also have a few volunteers from up north that were helping with the framing of the neighboring home.

• Highlands County School Board volunteered at Camp Sparta in Sebring.

• The Alan Jay Automotive Network volunteered at the Humane Society in Sebring.

Sensory Playtime is a safe place for children with sensory sensitivities, such as those with autism, to play. The new feature at Children’s Museum of the Highlands will be available by invitation only on the first Saturday of each month.

SEBRING — The Children’s Museum of the Highlands is a favorite place for kids to play. Youngsters seem to love to climb on and into exhibits and imagine they are racecar drivers, pilots, forest rangers and more. However, for some children with sensory sensitivities, the bright lights and noises may be a bit much.

The Children’s Museum is addressing the issue with a new program called Sensory Playtime. The public can drop by from 10 a.m. to 2 p.m. Saturday at 219 N. Ridgewood Drive in Sebring to learn about activities and new items the program will offer.

Executive Director Kelly Dressel said Sensory Playtime is a safe place for children with sensory sensitivities, such as those with autism, to play. The program will be limited to 30 guests to keep the noise level down. It will take place from 8:30-10 a.m. the first Saturday of the month beginning on May1.

“I had no idea the need was so great,” Dressel said. “We want this to be a safe spot for all children to play. We want the entire family and siblings to be able to play together.”

The program will be by invitation or RSVP only. Dressel is working with school guidance counselors and others for a list of children with special needs who may benefit from the program.

Some considerations for Sensory Playtime are lowered lighting, soft flooring, elimination of “ticking” noises, and tactile exhibits and puzzles. The museum has invested in a calming room and a comfort rocker.

The idea for Sensory Playtime came about when parents expressed their wish for a play space that was gentler to sensitive children. When parents receive the invitation, a PowerPoint slide show will be included that gives descriptions and pictures of the museum so children know what to expect.

She said the the public’s response has been overwhelming. A Community Grant from the Mason G. Smoak Foundation for $2,200 helped to get the program on its feet. Dressel said the museum could not accommodate every problem, but this is a good start. If warranted, Dressel said the museum may have to add more play times. She said she would search for more grants so more sensitive can play.

For more information on the Children’s Museum of the Highlands, call 863-451-5385 or email Kelly Dressel at director@childrensmuseumhighlands.com.

SEBRING — Highlands County new cases of COVID continued to rise on Thursday on the heels of the county’s announcement that it will be winding down its vaccine program. Saturday is the last day for first-shot Moderna vaccines in the county’s Point of Distribution in the former JCPenney store in Lakeshore Mall. Those who decide to get their first vaccines after Saturday will have to seek appointments through retail pharmacies.

Those who qualify for the vaccine can call 866-200-3858 or visit myvaccine.fl.gov for an appointment. Individuals who would rather walk-in can do so between the hours of 1-4 p.m. today, Friday and Saturday. It is important to note the county will stop the second shot boosters on May 22.

The county added another 29 new cases of COVID in Thursday’s report, bringing the overall total to 8,239 incidences of infection. All of the new cases were connected to residents who make up 8,148 of infections with just 91 non-residents to make up the difference.

There was one death reported overnight to bring the death total to 341 people.

Testing was the highest all week on Wednesday with 810 processed, of which 781 were negative results. A daily positivity rate of 3.58% was generated.

The Florida Department of Health report shows hospitalizations rose slightly to 646. Agency for Health Care Administration reported 35 current admissions as of 2:47 p.m. Wednesday, up from the previous day. The state had 3,411 people being treated for COVID.

There were 83 new deaths reported overnight, which includes three non-residents. Deaths have reached 35,378 people with 34,696 residents and 682 non-residents.

FDOH is reporting 8,307,032 people have been vaccinated as of Wednesday.

According to the Johns Hopkins University Center for Systems Science and Engineering, the U.S. has seen a total of 31.9 million cases and had 569,400 deaths.

Globally, there have been 144.1 million cases and 3.06 million deaths.