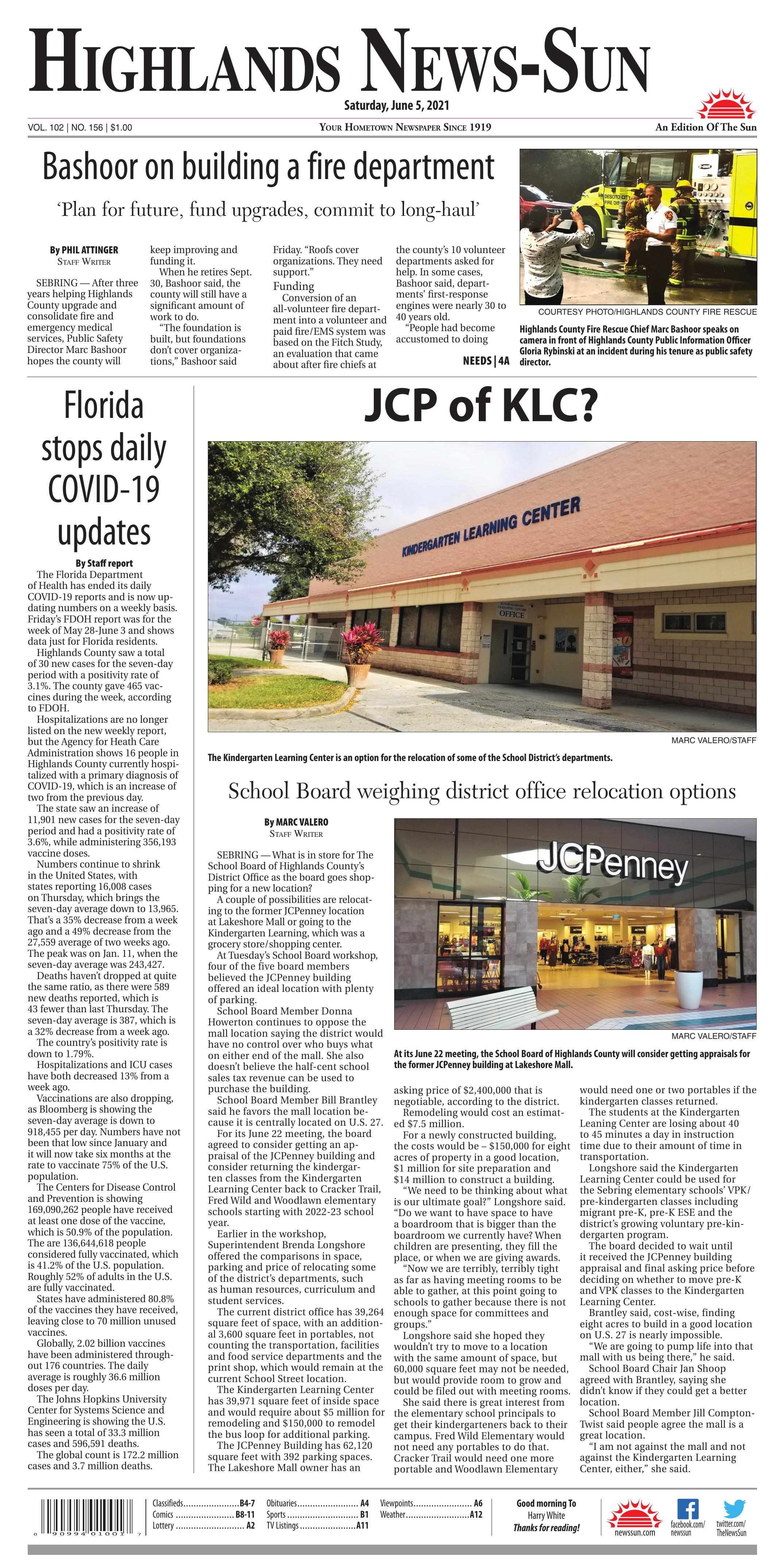 Highlands County Emergency Medical Services, more than 40 years ago during the tenure of then-director James ‘Jim’ Brooks, consisted of a significantly smaller department than is combined today with fire services into Highlands County Fire Rescue. Continuing to meet future needs is a concern of outgoing HCFR Chief Marc Bashoor.

When he retires Sept. 30, Bashoor said, the county will still have a significant amount of work to do.

Conversion of an all-volunteer fire department into a volunteer and paid fire/EMS system was based on the Fitch Study, an evaluation that came about after fire chiefs at the county’s 10 volunteer departments asked for help. In some cases, Bashoor said, departments’ first-response engines were nearly 30 to 40 years old.

“People had become accustomed to doing without,” Bashoor said. “It all costs money, and money doesn’t grow on trees.”

A municipal services taxing unit (MSTU) might work better to raise funds for the fire service, he said, versus the current combination of assessment and General Fund monies.

Basic needsWhen Bashoor came aboard in 2018, the volunteer firefighter roster had 182 names, one of whom was deceased. Culling the lists pared it down to 105, of whom 60 ran less than two calls per month, 20 ran two to four calls a month, 17 ran four to 10 calls and eight ran more than 10 calls. Full-time paid firefighters have helped cover the gap, he said.

Of Highlands County’s 34 engines and tankers, including four new ones already received or ordered, 18 should be taken off the road, according to National Fire Protection Association (NFPA) standards, and another six be relegated to secondary response, Bashoor said.

All of Highlands County’s departments now log calls on a single database, which helps the county track its needs. Bashoor said he now has a year’s worth of data to both plan for needs and demonstrate actual needs.

Finally, Bashoor advises that the county look into automatic mutual-aid agreements with Avon Park and Sebring city departments to ensure coverage, especially on parts of U.S. 27 where city limits and county coverage converge.

At its June 22 meeting, the School Board of Highlands County will consider getting appraisals for the former JCPenney building at Lakeshore Mall.

The Kindergarten Learning Center is an option for the relocation of some of the School District’s departments.

SEBRING — What is in store for The School Board of Highlands County’s District Office as the board goes shopping for a new location?

A couple of possibilities are relocating to the former JCPenney location at Lakeshore Mall or going to the Kindergarten Learning, which was a grocery store/shopping center.

At Tuesday’s School Board workshop, four of the five board members believed the JCPenney building offered an ideal location with plenty of parking.

School Board Member Donna Howerton continues to oppose the mall location saying the district would have no control over who buys what on either end of the mall. She also doesn’t believe the half-cent school sales tax revenue can be used to purchase the building.

School Board Member Bill Brantley said he favors the mall location because it is centrally located on U.S. 27.

For its June 22 meeting, the board agreed to consider getting an appraisal of the JCPenney building and consider returning the kindergarten classes from the Kindergarten Learning Center back to Cracker Trail, Fred Wild and Woodlawn elementary schools starting with 2022-23 school year.

Earlier in the workshop, Superintendent Brenda Longshore offered the comparisons in space, parking and price of relocating some of the district’s departments, such as human resources, curriculum and student services.

The current district office has 39,264 square feet of space, with an additional 3,600 square feet in portables, not counting the transportation, facilities and food service departments and the print shop, which would remain at the current School Street location.

The Kindergarten Learning Center has 39,971 square feet of inside space and would require about $5 million for remodeling and $150,000 to remodel the bus loop for additional parking.

The JCPenney Building has 62,120 square feet with 392 parking spaces. The Lakeshore Mall owner has an asking price of $2,400,000 that is negotiable, according to the district.

Remodeling would cost an estimated $7.5 million.

For a newly constructed building, the costs would be – $150,000 for eight acres of property in a good location, $1 million for site preparation and $14 million to construct a building.

“We need to be thinking about what is our ultimate goal?” Longshore said. “Do we want to have space to have a boardroom that is bigger than the boardroom we currently have? When children are presenting, they fill the place, or when we are giving awards.

“Now we are terribly, terribly tight as far as having meeting rooms to be able to gather, at this point going to schools to gather because there is not enough space for committees and groups.”

Longshore said she hoped they wouldn’t try to move to a location with the same amount of space, but 60,000 square feet may not be needed, but would provide room to grow and could be filed out with meeting rooms.

The students at the Kindergarten Leaning Center are losing about 40 to 45 minutes a day in instruction time due to their amount of time in transportation.

The board decided to wait until it received the JCPenney building appraisal and final asking price before deciding on whether to move pre-K and VPK classes to the Kindergarten Learning Center.

“We are going to pump life into that mall with us being there,” he said.

School Board Chair Jan Shoop agreed with Brantley, saying she didn’t know if they could get a better location.

The Florida Department of Health has ended its daily COVID-19 reports and is now updating numbers on a weekly basis. Friday’s FDOH report was for the week of May 28-June 3 and shows data just for Florida residents.

Highlands County saw a total of 30 new cases for the seven-day period with a positivity rate of 3.1%. The county gave 465 vaccines during the week, according to FDOH.

Hospitalizations are no longer listed on the new weekly report, but the Agency for Heath Care Administration shows 16 people in Highlands County currently hospitalized with a primary diagnosis of COVID-19, which is an increase of two from the previous day.

The state saw an increase of 11,901 new cases for the seven-day period and had a positivity rate of 3.6%, while administering 356,193 vaccine doses.

Deaths haven’t dropped at quite the same ratio, as there were 589 new deaths reported, which is 43 fewer than last Thursday. The seven-day average is 387, which is a 32% decrease from a week ago.

The country’s positivity rate is down to 1.79%.

Hospitalizations and ICU cases have both decreased 13% from a week ago.

Vaccinations are also dropping, as Bloomberg is showing the seven-day average is down to 918,455 per day. Numbers have not been that low since January and it will now take six months at the rate to vaccinate 75% of the U.S. population.

States have administered 80.8% of the vaccines they have received, leaving close to 70 million unused vaccines.

Globally, 2.02 billion vaccines have been administered throughout 176 countries. The daily average is roughly 36.6 million doses per day.

The Johns Hopkins University Center for Systems Science and Engineering is showing the U.S. has seen a total of 33.3 million cases and 596,591 deaths.