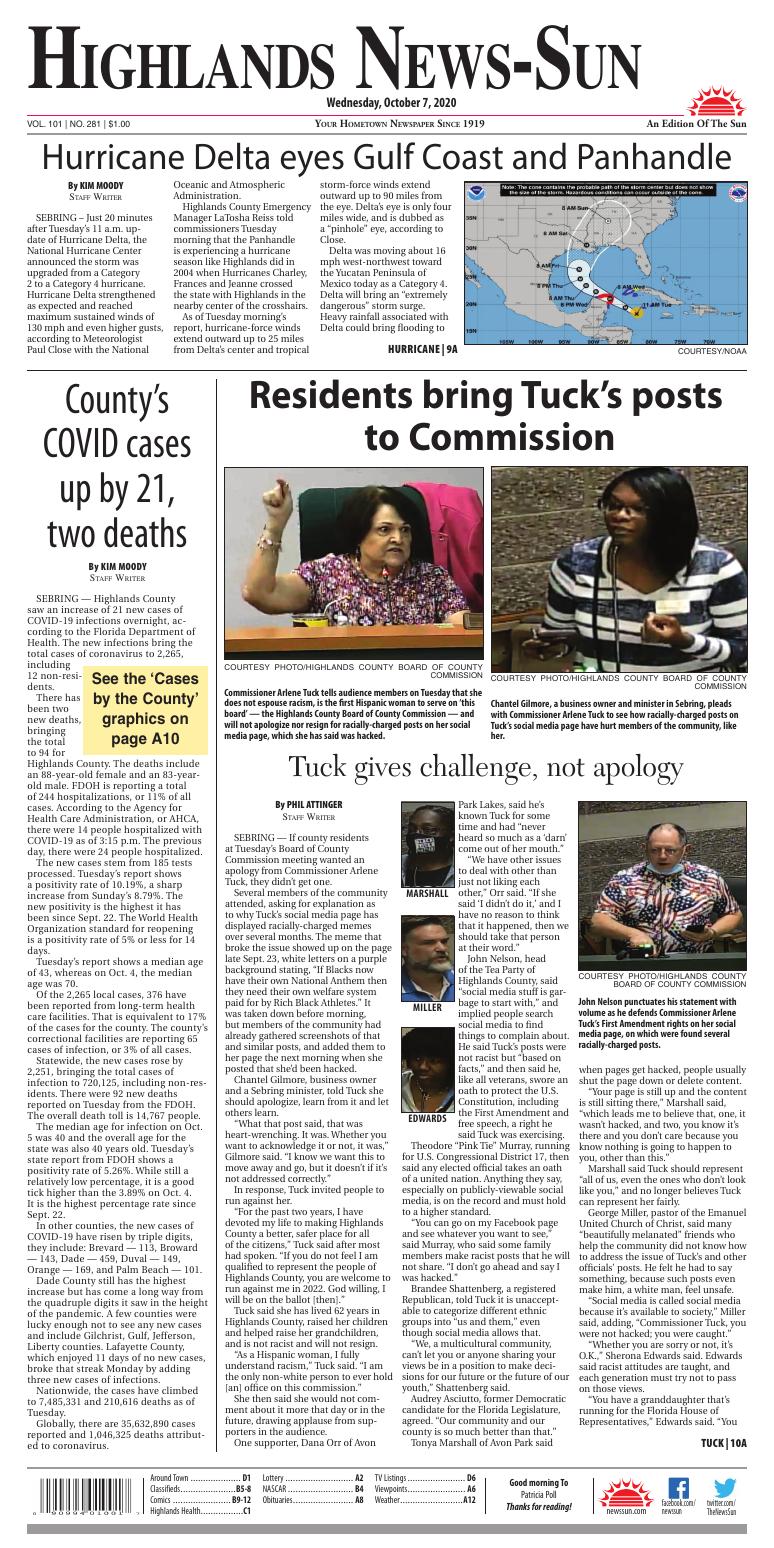 A dock is closed to the public before Hurricane Delta arrives near Playa del Carmen, Mexico, early Tuesday, Oct. 6, 2020. Hurricane Delta rapidly intensified into a Category 2 hurricane Tuesday on a course to hammer southeastern Mexico and then grow to a potentially catastrophic Category 4 on approach to the U.S. Gulf Coast this week.

The National Hurricane Center's forecast for Hurricane Delta as of Tuesday morning.

Hurricane Delta will bring damaging winds far from the center of the storm.

SEBRING – Just 20 minutes after Tuesday’s 11 a.m. update of Hurricane Delta, the National Hurricane Center announced the storm was upgraded from a Category 2 to a Category 4 hurricane. Hurricane Delta strengthened as expected and reached maximum sustained winds of 130 mph and even higher gusts, according to Meteorologist Paul Close with the National Oceanic and Atmospheric Administration.

Highlands County Emergency Manager LaTosha Reiss told commissioners Tuesday morning that the Panhandle is experiencing a hurricane season like Highlands did in 2004 when Hurricanes Charley, Frances and Jeanne crossed the state with Highlands in the nearby center of the crosshairs.

Delta was moving about 16 mph west-northwest toward the Yucatan Peninsula of Mexico today as a Category 4. Delta will bring an “extremely dangerous” storm surge. Heavy rainfall associated with Delta could bring flooding to the Peninsula, Cayman Islands and western Cuba through “midweek,” the National Hurricane Center’s advisory said.

Forecasters say Delta will weaken slightly to a Category 3 storm (still considered a major storm) and make landfall as a major hurricane. However, where Delta makes landfall next will affect many in the Gulf Coast, including the Panhandle of Florida. Close said as of Tuesday’s forecast, the Pensacola area will have tropical storm conditions.

Highlands County won’t see much change from our usual summer-day pattern throughout the weekend. Close said temperature highs will be in the 90’s for a high and 70 for lows with the typical afternoon shower/thunder storms in the afternoons.

The next storm will be called Epsilon as the storms continue to be named through the Greek alphabet.

Commissioner Arlene Tuck tells audience members on Tuesday that she does not espouse racism, is the first Hispanic woman to serve on ‘this board’ — the Highlands County Board of County Commission — and will not apologize nor resign for racially-charged posts on her social media page, which she has said was hacked.

Chantel Gilmore, a business owner and minister in Sebring, pleads with Commissioner Arlene Tuck to see how racially-charged posts on Tuck’s social media page have hurt members of the community, like her.

John Nelson punctuates his statement with volume as he defends Commissioner Arlene Tuck’s First Amendment rights on her social media page, on which were found several racially-charged posts.

SEBRING — If county residents at Tuesday’s Board of County Commission meeting wanted an apology from Commissioner Arlene Tuck, they didn’t get one.

Several members of the community attended, asking for explanation as to why Tuck’s social media page has displayed racially-charged memes over several months. The meme that broke the issue showed up on the page late Sept. 23, white letters on a purple background stating, “If Blacks now have their own National Anthem then they need their own welfare system paid for by Rich Black Athletes.” It was taken down before morning, but members of the community had already gathered screenshots of that and similar posts, and added them to her page the next morning when she posted that she’d been hacked.

Chantel Gilmore, business owner and a Sebring minister, told Tuck she should apologize, learn from it and let others learn.

“What that post said, that was heart-wrenching. It was. Whether you want to acknowledge it or not, it was,” Gilmore said. “I know we want this to move away and go, but it doesn’t if it’s not addressed correctly.”

In response, Tuck invited people to run against her.

“For the past two years, I have devoted my life to making Highlands County a better, safer place for all of the citizens,” Tuck said after most had spoken. “If you do not feel I am qualified to represent the people of Highlands County, you are welcome to run against me in 2022. God willing, I will be on the ballot [then].”

Tuck said she has lived 62 years in Highlands County, raised her children and helped raise her grandchildren, and is not racist and will not resign.

“As a Hispanic woman, I fully understand racism,” Tuck said. “I am the only non-white person to ever hold [an] office on this commission.”

She then said she would not comment about it more that day or in the future, drawing applause from supporters in the audience.

One supporter, Dana Orr of Avon Park Lakes, said he’s known Tuck for some time and had “never heard so much as a ‘darn’ come out of her mouth.”

“We have other issues to deal with other than just not liking each other,” Orr said. “If she said ‘I didn’t do it,’ and I have no reason to think that it happened, then we should take that person at their word.”

John Nelson, head of the Tea Party of Highlands County, said “social media stuff is garbage to start with,” and implied people search social media to find things to complain about. He said Tuck’s posts were not racist but “based on facts,” and then said he, like all veterans, swore an oath to protect the U.S. Constitution, including the First Amendment and free speech, a right he said Tuck was exercising.

Theodore “Pink Tie” Murray, running for U.S. Congressional District 17, then said any elected official takes an oath of a united nation. Anything they say, especially on publicly-viewable social media, is on the record and must hold to a higher standard.

“You can go on my Facebook page and see whatever you want to see,” said Murray, who said some family members make racist posts that he will not share. “I don’t go ahead and say I was hacked.”

Brandee Shattenberg, a registered Republican, told Tuck it is unacceptable to categorize different ethnic groups into “us and them,” even though social media allows that.

“We, a multicultural community, can’t let you or anyone sharing your views be in a position to make decisions for our future or the future of our youth,” Shattenberg said.

Audrey Asciutto, former Democratic candidate for the Florida Legislature, agreed. “Our community and our county is so much better than that.”

Tonya Marshall of Avon Park said when pages get hacked, people usually shut the page down or delete content.

“Your page is still up and the content is still sitting there,” Marshall said, “which leads me to believe that, one, it wasn’t hacked, and two, you know it’s there and you don’t care because you know nothing is going to happen to you, other than this.”

Marshall said Tuck should represent “all of us, even the ones who don’t look like you,” and no longer believes Tuck can represent her fairly.

George Miller, pastor of the Emanuel United Church of Christ, said many “beautifully melanated” friends who help the community did not know how to address the issue of Tuck’s and other officials’ posts. He felt he had to say something, because such posts even make him, a white man, feel unsafe.

“Social media is called social media because it’s available to society,” Miller said, adding, “Commissioner Tuck, you were not hacked; you were caught.”

“Whether you are sorry or not, it’s O.K.,” Sherona Edwards said. Edwards said racist attitudes are taught, and each generation must try not to pass on those views.

“You have a granddaughter that’s running for the Florida House of Representatives,” Edwards said. “You can make a change by telling her not to repeat the same footsteps that you’ve walked down.”

Commissioner Jim Brooks said the County Commission can’t take any action, especially with regard to recalling an elected board member.

Brooks then cited the Bible, where pharisees asked Jesus what punishment an adulteress should receive and he answered that those without sin should cast the first stone.

Miller said officials need to listen, and not use Jesus as an excuse. What makes Sebring more peaceful than other places, he said, is that people can speak and be heard.

“Please hear the words we are saying, because when Black and brown people say, ‘This hurts,’ it’s not for the white man to say, ‘You’re wrong. Shut up,’” Miller said.

Commissioner Don Elwell, chairing the meeting in Commissioner Ron Handley’s stead, said he believes Tuck had no malicious intent when she shared the meme, but added that “hyper-partisan posts” abound on social media.

“It’s the place to go to find people who don’t necessarily act the way we were taught to do by Jesus and the Bible,” Elwell said.

Society has devolved there, he said, both nationally and locally, especially when people stand and cheer an opinion that’s clearly in the minority.

“It just furthers that divide,” Elwell said. “We don’t need that.”

Instead, people need to say, “I screwed up,” and the have other side say, “I forgive you,” he said.

“We need both sides to do that and both sides to mean it,” Elwell said, from the nation to the town. “We literally have the power to end it, but we have to choose to do so.” 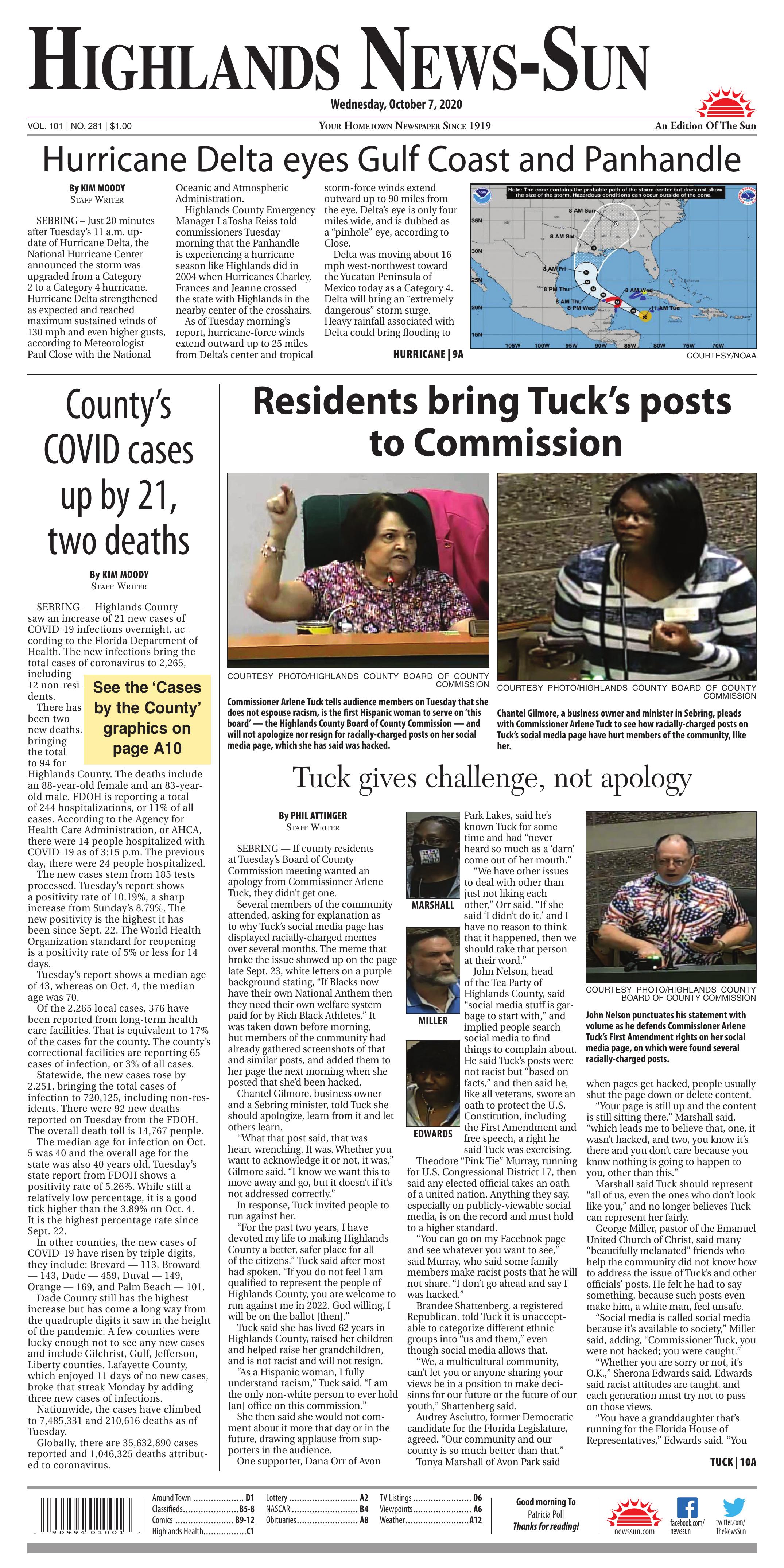